‘Illumination, harmony and heroism are three major powers that can uplift life to higher and higher levels. All three are manifested in the New Testament’s account of the life, ministry and crucifixion of Jesus. While the Gospels tell little of the childhood of Jesus. We can understand how illuminated he was from the incident when at the age of twelve he was found in a synagogue discussing Jewish Mosaic Law with the elders of the synagogue.

Throughout his ministry, Jesus brings forth the message of having love, not only for God, but a deep, uncompromising love of humans for each other. This insistence of Jesus on harmony between humans is clearly expressed when he adds another commandment to the Ten Commandments, the Golden Rule: Do to others what you would have them do to you.” Jesus further admonishes us to “turn the other cheek”.

His “Love” illuminates us, asking humanity to go far beyond the egoistic love for one’s family, friends or country. This “Love” that Jesus taught so firmly during his ministry was given the Greek name, “agape” in the early years of Christianity. It is through agape that true harmony could be created through human unity. Humanity has been told this, but has yet to truly believe him who came to give us this message.

Jesus’s incredible heroism is shown to us clearly through his resolve to complete his mission. He undergoes crucifixion with great calmness. And even while undergoing the excruciating pain of the crucifixion, he still asks, “Father, forgive them; for they know not what they do.” Can we imagine any greater love?

Thirdly, we may take into account the contemporary fact that the entire world is moving rapidly towards the synthesis of the East and the West, and in that context, it seems obvious that our teaching-learning material should foster the gradual familiarisation of students with global themes of universal significance as also those that underline the importance of diversity in unity. This implies that the material should bring the students nearer to their cultural heritage, but also to the highest that is available in the cultural experiences of the world at large.

Fourthly, an attempt should be made to select from Indian and world history such examples that could illustrate the theme of the upward progress of humankind. The selected research material could be multi-sided, and it should be presented in such a manner and in the context in which they need in specific situations that might obtain or that can be created in respect of the students.

The research team at the Sri Aurobindo International Institute of Educational Research (SAIIER) has attempted the creation of the relevant teaching-learning material, and they have decided to present the same in the form of monographs. The total number of these monographs will be around eighty. It appears that there are three major powers that uplift life to higher and higher normative levels, and the value of these powers, if well illustrated, could be effectively conveyed to the learners for their upliftment. These powers are those of illumination, heroism and harmony.

It may be useful to explore the meanings of these terms — illumination, heroism and harmony — since the aim of these monographs is to provide material for a study of what is sought to be conveyed through these three terms. We offer here exploratory statements in regard to these three terms.

Illumination is that ignition of inner light in which meaning and value of substance and life-movement are seized, understood, comprehended, held, and possessed, stimulating and inspiring guided action and application and creativity culminating in joy, delight, even ecstasy. The width, depth and height of the light and vision determine the degrees of illumination, and when they reach the splendour and glory of synthesis and harmony, illumination ripens into wisdom. Wisdom, too, has varying degrees that can uncover powers of knowledge and action, which reveal unsuspected secrets and unimagmed skills of art and craft of creativity and effectiveness.

Heroism is, essentially, inspired force and self-giving and sacrifice in the operations of will that is applied to the quest, realisation and triumph of meaning and value against the resistance of limitations and obstacles by means of courage, battle and adventure. There are degrees and heights of heroism determined by the intensity, persistence and vastness of sacrifice. 1-leroism attains the highest states of greatness and refinement when it is guided by the highest wisdom and inspired by the sense of service to the ends of justice and harmony, as well as when tasks are executed with consummate skill.

1-larmony is a progressive state and action of synthesis and equilibrium generated by the creative force of joy and beauty and delight that combines and unites knowledge and peace and stability with will and action and growth and development. Without harmony, there is no perfection, even though there could be maximisation of one or more elements of our nature. When illumination and heroism join and engender relations of mutuality and unity, each is perfected by the other and creativity is endless.

The purpose of this monograph, entitled “The Crucifixion”, is to present the message of love Jesus taught during the three years of his ministry; as well as to present the dramatic events that culminated in his Crucifixion. This message powerfully opened to humanity Love as it had never been conceived of before. Certainly, we can read of God’s love for his creation and humanity in the Old Testament such as in The Law of Moses and The Psalms. But as history tells us, the message of love Jesus brought to humanity was carried beyond its Jewish context and brought to all of humanity by Paul of The New Testament. Paul recognised that the’ non-Jewish world could not adhere to both the strict Law of Moses, as orthodox Jews had to in order to worship properly, as well as follow the path of the illuminated Love Jesus asked of us. He did away with the Law of an “eye for an eye, and a tooth for a tooth” by replacing it with the Golden Rule. To demand both would have made it impossible to spread Jesus’s truth to all of humanity. Jesus asked us to love each other as God loves us. Here was a great step in the evolution of humanity towards human unity.

All of the words of God and Jesus that are used in this essay are printed in italics. Furthermore, those sayings which have become famous and are used as proverbs are underlined. Certain words and expressions which deserve the reader’s special attention are explained either in the text or in the Notes. There are many versions in English of the Bible. The one chosen for this essay employs modern English rather than older versions which use archaic spellings and grammar.

The Bible is the only source of the events as well as words of both Jesus and Moses. Modern scholarship and archaeological research are making attempts to clarify as many points as possible. However, it is the Bible which has been the foundation of Judaic-Christian belief for over 3,000 years in the case of the Judaism, and for 2,000 years in the case of the Christianity. So, this essay gives some attention to the development of the New Testament. There is no mistaking the fact that the Bible has been considered to be the absolute truth, the Word of God, for much of its existence. And in consideration of this history; the present essay has been written as if this were the case. That is, regardless of the doubts and problems raised by modern scholarship and ones own personal faith, this essay treats the Bible as if it were the truth.

There are times when the beliefs and dogmas of Christianity need to be explained. Although the basic theology of all of Christianity is based on the Nicene Creed, each sect of Christianity interprets the Bible somewhat differently. The present essay does its best to avoid any interpretation and discusses only the actual passages, descriptions and sayings of Jesus and Moses found in the Bible. For this reason, although the term “Christ” is explained, Jesus himself is only referred to as “Jesus” throughout the essay. The focus of this essay is God’s I ove for humanity as it is found in both the Old and New Testaments, and particularly as it is brought forth by the sacrifice of Jesus on the Cross, that is, the Crucifixion. 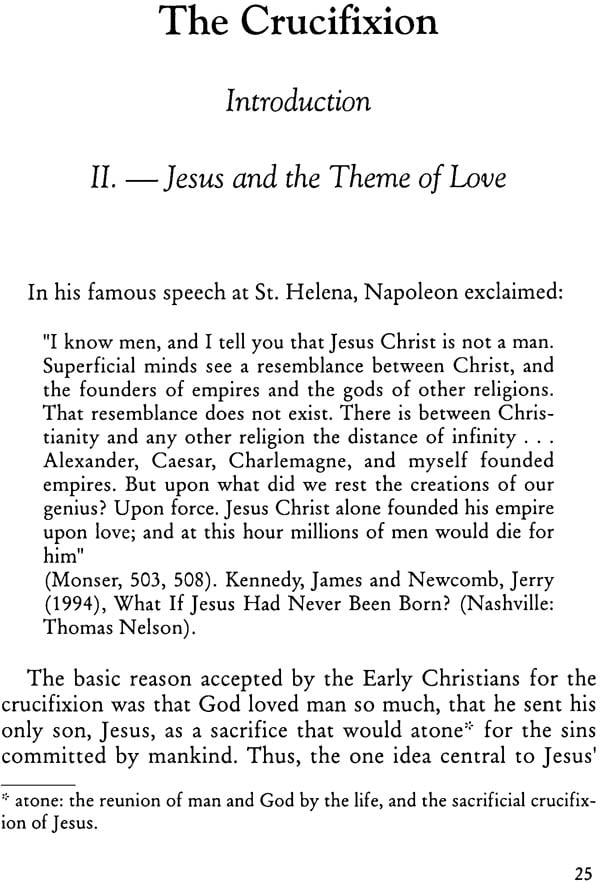 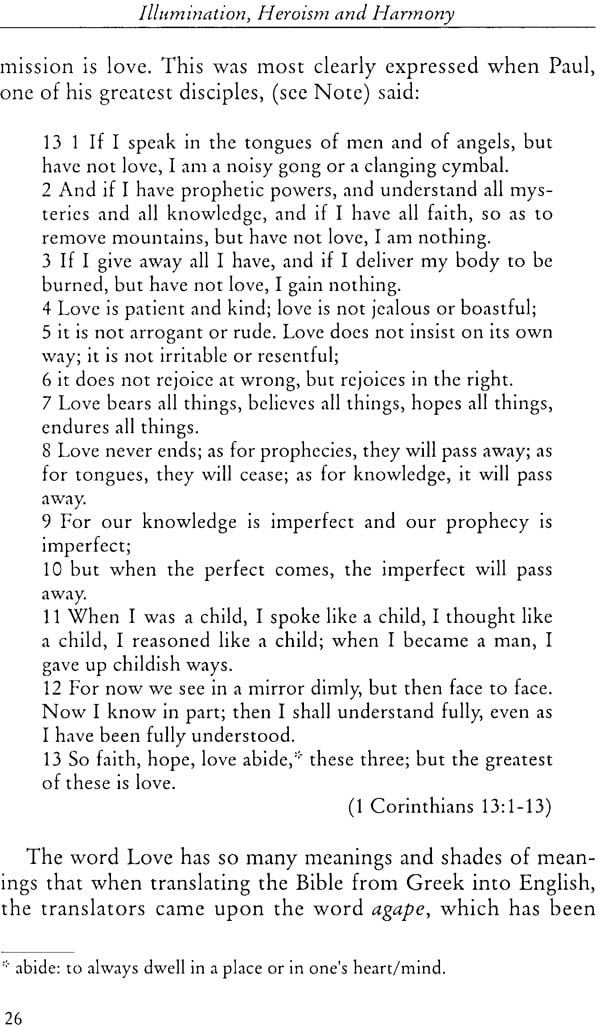 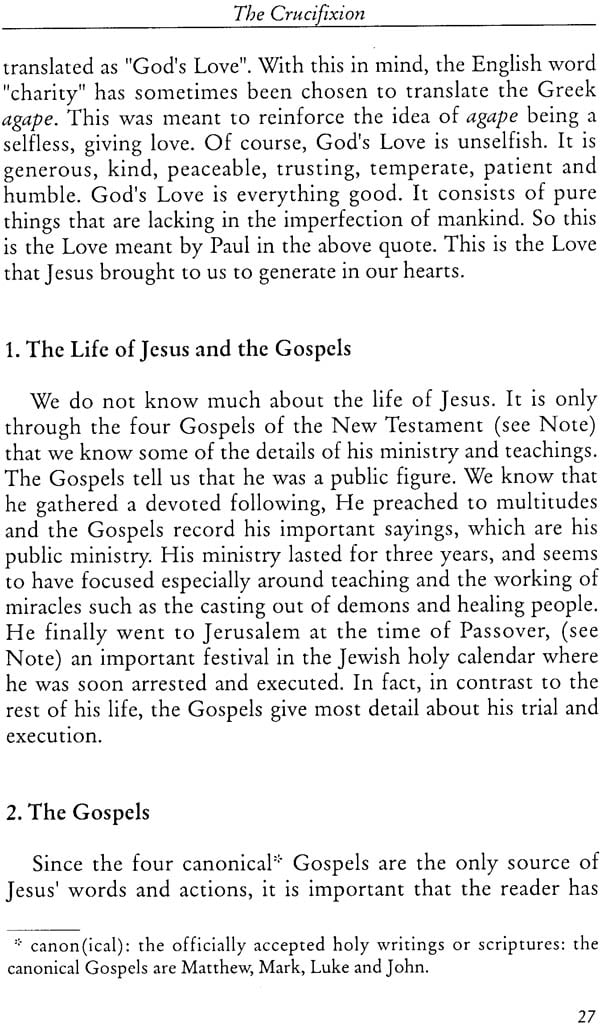 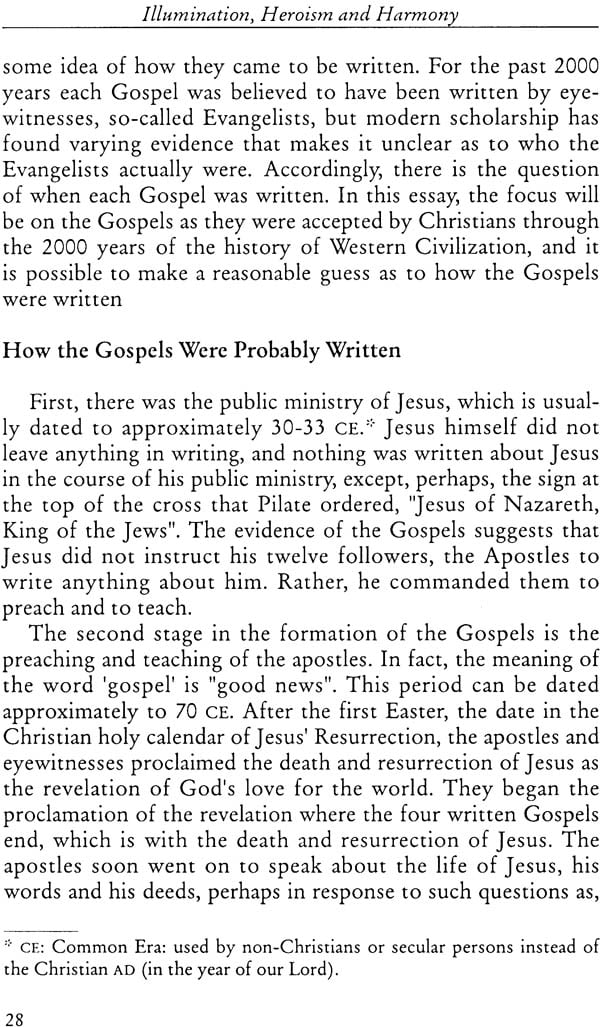 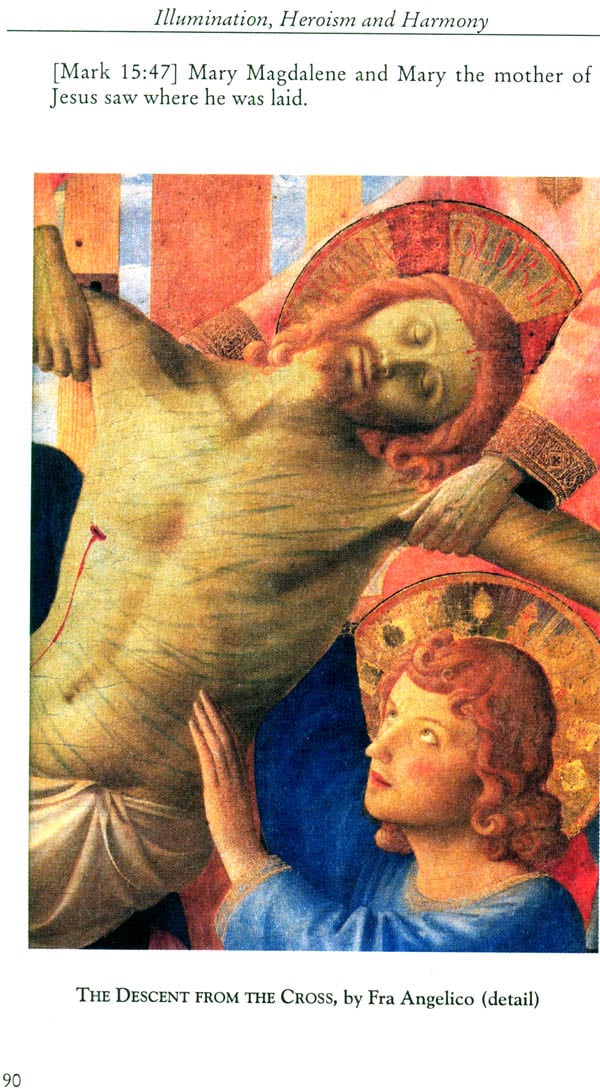 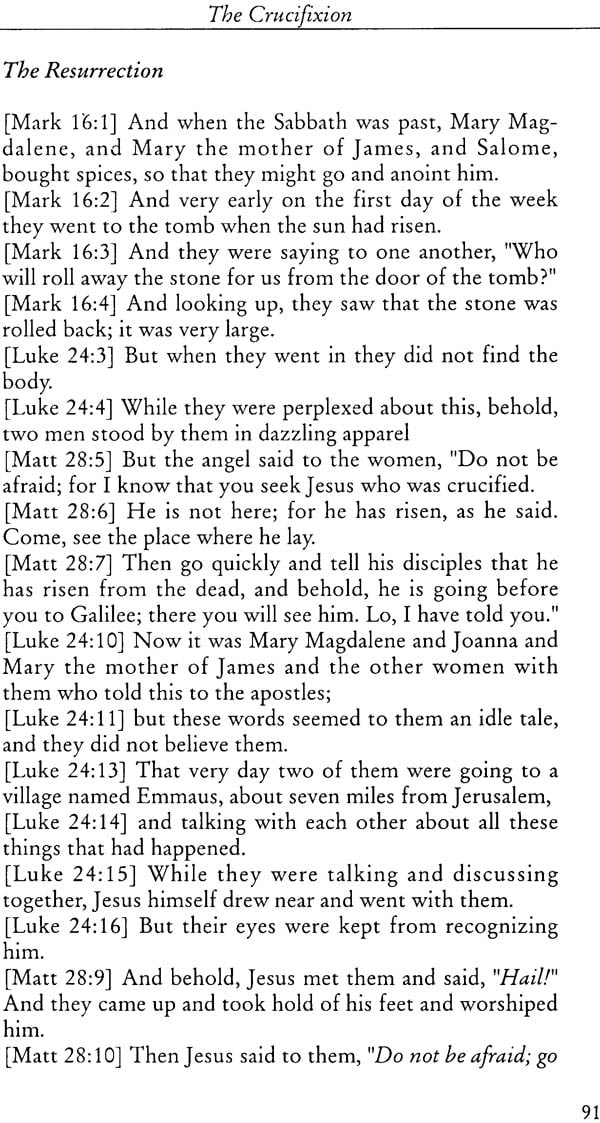 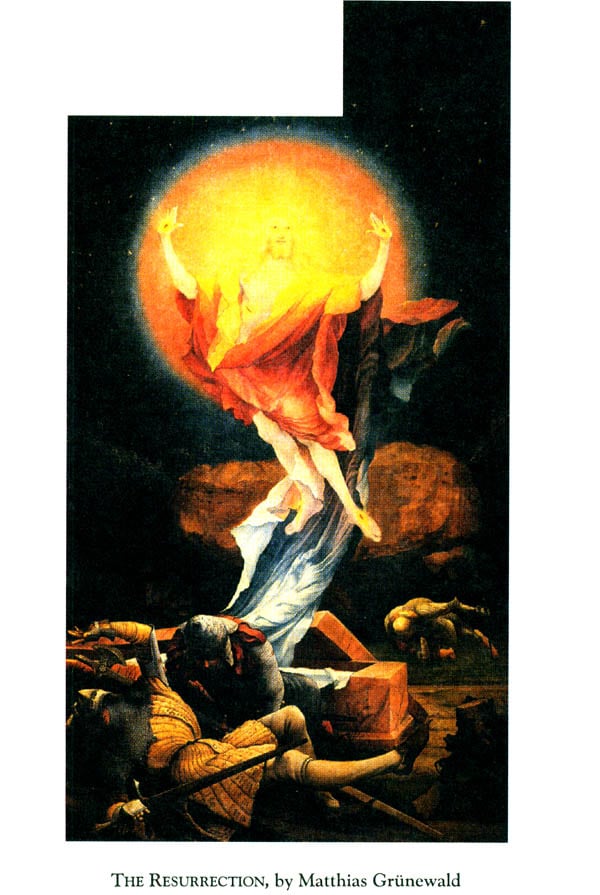 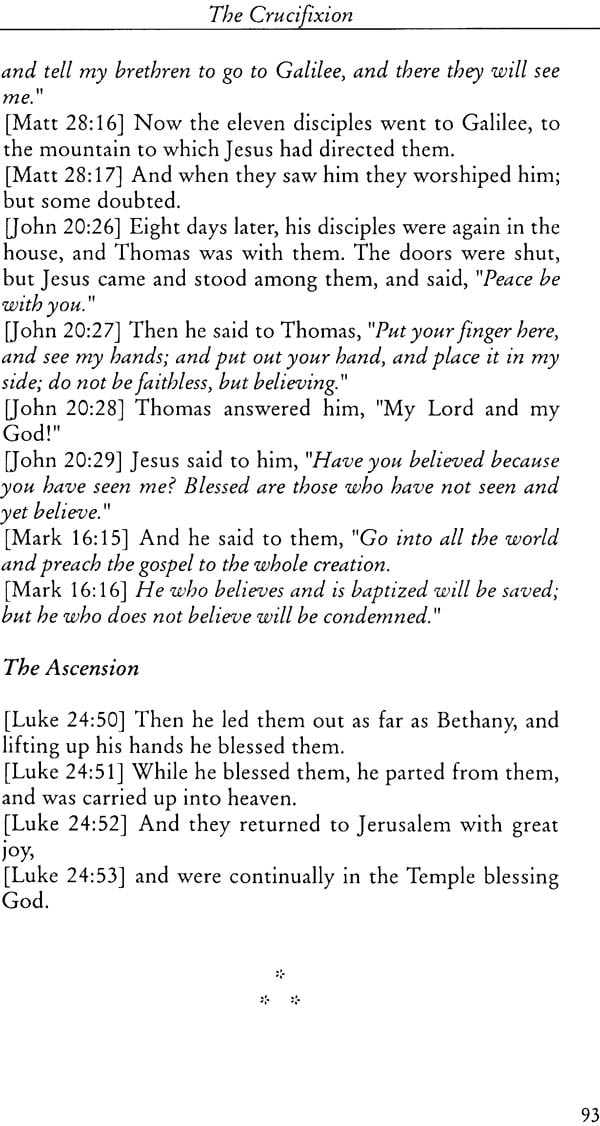 Christ the Saviour and Christ Myth
By Swami Prajnanananda
$16.50 The Second Coming of Christ (In 2 Volumes): The Resurrection of the Christ Within You: A Revelatory Commentary on The Original Teachings of Jesus
By Paramhansa Yogananda
$52
FREE Delivery Life on My Side of The Street and or Dialogue and Other Poems
By Anna Sujatha Mathai and Priya Sarukkai Chabria
$10.40
$13  (20% off)