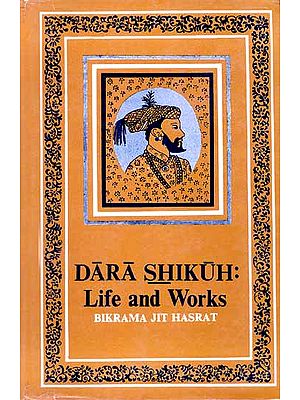 $30.00
Notify me when this item is available
Save to Wishlist Send as E-card Share by Email
About the Book:

Indian tradition remembers Dara Shikuh not so much as an emperor's son, but as a mystic philosopher. The great dream of his life a - dream shattered by his untimely death - was the brotherhood of all faiths and the unity of mankind. After him the vision of unity was lost in the atmosphere of hatred and rivalry created by the warring sects and religious schools, and even today we are living in the age of religious disintegration.

Bikrama Jit Hasrat (b. 8 August, 1915) was educated at Lahore, Calcutta, and Oxford Universities. From 1938 to 1946 he has served as Nizam lecture at Visva-Bharati, Santiniketan; thereafter, he joined the Punjab Education Department working as professor of history/Principal in P.E.S. (I). In between, he had been a British Council Scholar at Oxford (1955-57), a Colombo plan professor of history at Tribhuvan University, Kathmandu (Nepal), a visiting fellow of the Indian Institute of Advanced Study, Simla, and a visiting professor at the University of Calgary, Alberta, Canada.

An eminent linguist and historian, Bikrama Jit Hasrat has specialized in many fields - history, linguistics and comparative religion. He is also considered as an authority on the political and socio-economic history of the Himalayan region. Amongst his notable works are : Indian Sufi Orders, Anglo-Sikh Relations, The Punjab Papers, Life and Times of Ranjit Singh, History of Neap and History of Bhutan.