From Surprise To Reckoning: The Kargil Review Committee Report 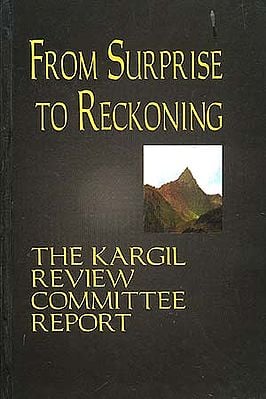 $35.50
Notify me when this item is available
Save to Wishlist Send as E-card Share by Email
From the Jacket:

Four hundred and seventy four officers and men of the Indian Armed Forces laid down their lives in Kargil to protect the integrity of the country against an act of war by Pakistan under cover of a peace process initiated in Lahore. Many innocent civilians too lost their lives and property and found their livelihood disrupted as had tens of thousands earlier through years through years of proxy war. The entire nation united in grief with widows and parents across the land to mourn the blood, tears and treasure invested in Kargil.

The Kargil Review Committee was not set up to conduct an inquiry but to examine the sequence of events and make recommendations for the future. There are many lessons that the Armed Forces, Intelligence agencies, Parliament, Government, the media and the nation as a whole must learn. These have been set out in the Committee's Findings, which should stimulate introspection and reflection, leading to purposeful action.

Apart from the Prologue and Epilogue, the Report consists of fourteen chapters. Chapter 2 deals with the historical background to Jammu & Kashmir and Indo-Pak conflicts over it, the evolution of the Line of Control, Pakistan's modus operandi and India's responses. The Focus of Chapter 3 is on the events leading up to the Kargil conflict. It deals with the Simla Agreement, Indo-Pak relations up to the Lahore Declaration and Pakistan's proxy war in Jammu & Kashmir.

The system of operational managements by the Indian Army, a reconstruction of the sequence of events leading to Kargil and the initial response by the Army to contain and repel the intrusion are addressed in Chapters 4 and 5. The next three Chapters deal with the national intelligence framework, the intelligence inputs available up to the Kargil intrusion, and an analysis and assessment of the available intelligence. Give the implications of defence expenditure for military preparedness and national security, budgetary trends have analysed in Chapter 9. The nuclear factor and its bearing on Kargil is discussed in Chapter 10.

The Kargil War brought out in bold relief the role of the electronic, and print media in creating awareness of such events, and issue dealt with in Chapter 11. Could Kargil have been avoided? This is the subject of Chapter 12.The findings and recommendations of the Committee are contained in Chapters 13 and 14.

An important document that will interest any serious reader, as also those working in the fields of international relations, strategic and defence studies, and history.