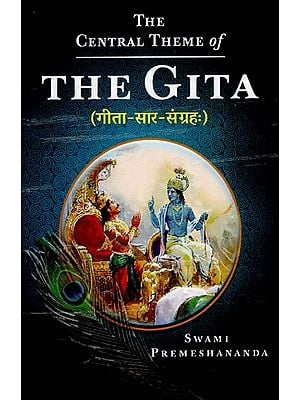 The Gita (The Central Theme of)

Spread over eighteen chapters, the Bhagavad Gita has seven hundred verses which contain the essence of all scriptures. Often a first-time reader finds it hard to grasp the ideas of this great text and soon loses interest and gives up the pursuit altogether. Thus one is deprived of the blessings of studying the Gita, especially the school and college students. They do not get the chance to be introduced to the perennial stream of the eternal values that India fosters in her bosom. As a result, due to lack of strength of character, which the Gita helps one develop, they often fall prey to blind imitation and hence lead a life of self-pity. Among the notable persons who have struggled tirelessly to help the youths in this matter is a revered monk of the Ramakrishna Order-Swami Premeshananda (1884-1967).

In his Gita-Sara-Samgraha [Essence of Gita] originally in Bengali, he presents the central theme of the Gita, by culling hundred verses from it, and arranging them cogently in ten chapters, with ten verses in each. At the start of every chapter, he has also explained its central message. To facilitate better comprehension, necessary comments have also been given by the author at the end of many of the verses.

The present book is the English rendering of the Bengali Gita-Sara-Samgraha. The translation of the verses has been taken from Srimad Bhagavad Gita by Swami Swarupananda (Advaita Ashrama, Mayavati, 1940). The introduction and the comments have been taken from Go Forward (Letters of Swami Premeshananda, Vedanta Press and Bookshop, Southern California, 1992), translated by Swami Swahananda (Head of Vedanta Society of Southern California, until his demise in 2015). In order to present the Gita-Sara-Samgraha [Essence of Gita] to the reader who is not that familiar with Bengali, Swami Vipashananda of Belur Math has taken great pains to ably perform the editorial work. To the readers who are keen to delve into the ethereal realm of the Gita but have little knowledge of Bengali, I hope, this translation and presentation of the Gita will be of great value and help.

We know two things in this universe, one is insentient, and the other is sentient. The one who knows is sentient while that which is known is insentient. Whatever we see and whatever we know is insentient. The various methods of systematically understanding this visible insentient universe are nowadays known by the name "science". As a result of advancement in science, man's power has increased beyond imagination. But his inner weaknesses have not decreased in the slightest. On the contrary, the ever new and enchanting discoveries of science are making man materialistic due to his preoccupation with the insentient. The thinkers of ancient India investigated the reality of both the sentient and the insentient. In those days, there was no lack of external things to meet one's daily needs. Moreover, due to advancements in the sciences of the sentient world, they had acquired immense power.

The spiritual power and the resultant peace and freedom that followed are beyond the conception of those who take such pride in their science [of the physical insentient world]. Indian philosophers, like modern scientists, had a great inquisitiveness with regard to the highest truth and engaged themselves in investigating the nature of consciousness and the nature of the Self. As a result of long spiritual practices, they were able to experience Consciousness as the cause of the universe-knowing which nothing more remains to be known. They then handed down this truth through a succession of gurus and disciples. Even in these days of extreme materialism, the educated people of India are at least acquainted with such all-knowing souls as Trailanga Swami, Bhaskarananda Swami, Mathuradas, Sri Ramakrishna Paramahamsa, and Swami Vivekananda. The truths that were realized by the spiritual scientists of India, along with the means to their realization, are described in the Upanishads. Detailed accounts of this knowledge and the means to realization were later recorded in the Puranas, Tantras and other scriptures. The Bhagavad Gita was composed by collecting all the essential truths of these scriptures of liberation. If one studies this one book alone, one can learn virtually everything that has to be known concerning the knowledge of the Self and the means to liberation.

WHAT IS YOGA AND HOW MANY TYPES OF YOGA ARE THERE?

Yoga has been taught in the Bhagavad Gita as the means to having the direct vision of God and achieving union with Him. The meaning of the word yoga is union .

There are four types of yoga: Karma Yoga, Dhyana Yoga, Bhakti Yoga, and Jnana Yoga. In the Gita, each of the eighteen chapters is designat-ed as a specific yoga. But if we analyse the nature of each, we get the impression that each one of the eighteen chapters contains one or more of the four abovementioned yogas. In this book [see the "Contents"], Vishada Yoga, Bhakti Yoga, and Vibhuti Upasana Yoga fall within the category of "Bhakti Yoga"; Jnana Yoga, Daiva Asura Sam-pad Vibhaga Yoga, Guna Traya Vibhaga Yoga, Kshetra shetrajna Vijnana Yoga, and Jivanmukti Vijnana Yoga within "Jnana Yoga"; and the chapters Karma Yoga and Dhyana Yoga belong to those very respective topics, i.e. "Karma Yoga" and "Dhyana Yoga".

The means to realizing God by analysing the question "What is God and what is He like?" is called Jnana Yoga, the path of knowledge. The means of attaining Him through love is called Bhakti Yoga, the path of devotion. The attempt to directly perceive God by making the mind one-pointed is termed Dhyana Yoga, the path of meditation, or Raja Yoga, the royal path. Realizing God by offering all the fruits of action to Him and by performing one's duties in an unselfish spirit is called Karma Yoga, the path of selfless action. No matter how different these four yogas may appear externally, they all share the same goal-the union of the individual soul with the Supreme Soul. The jnanis refer to this union as the "realization of Brahman"; yogis call it the "attainment of Self-knowledge or samadhi" (merging the mind in the Self); devotees call it "God-realization or the vision of God"; Karma Yogis call it "freedom from the bondage of karma". And, people commonly refer to it as "realizing the goal". But regardless of the different methods by which spiritual aspirants experience this union, the Reality is one and the experience is also basically of the same nature. Sri Ramakrishna used to say: "Cake will taste sweet whether you eat it straight up or lying on its side." 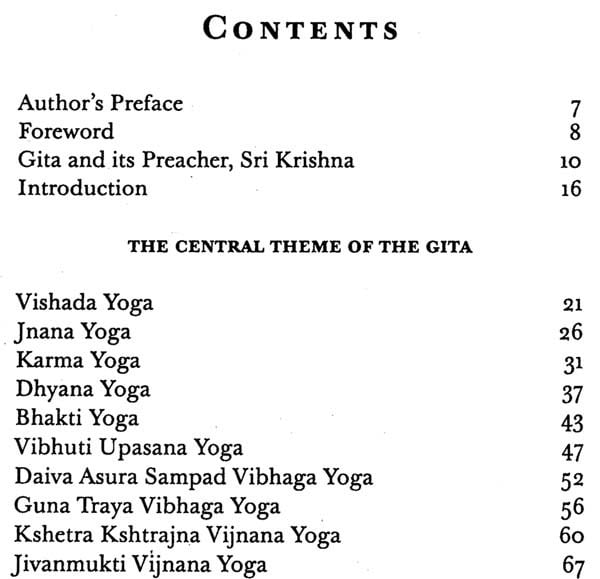 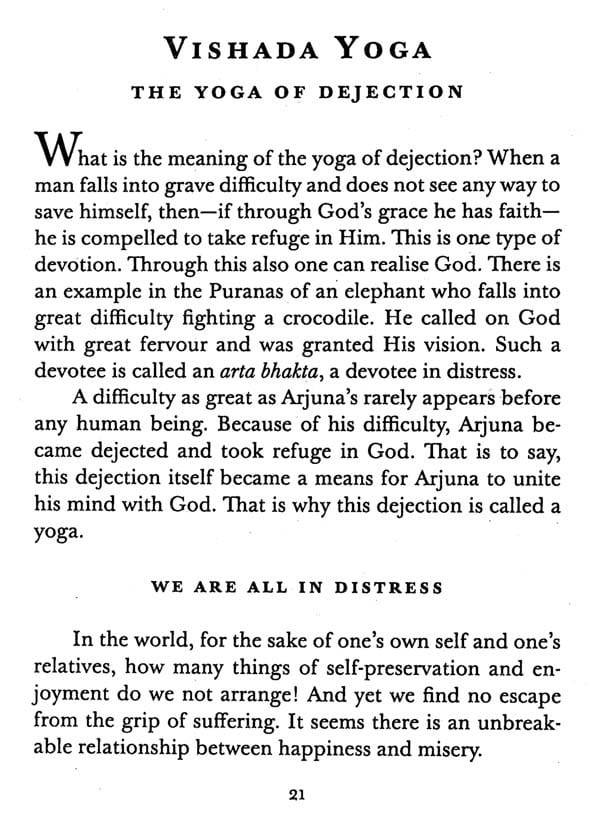 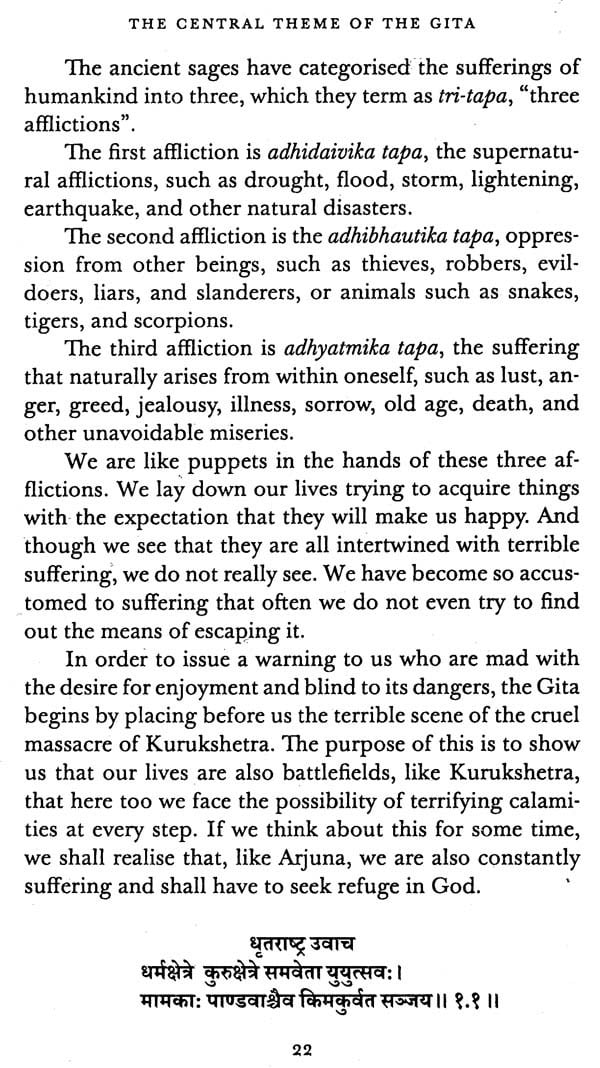 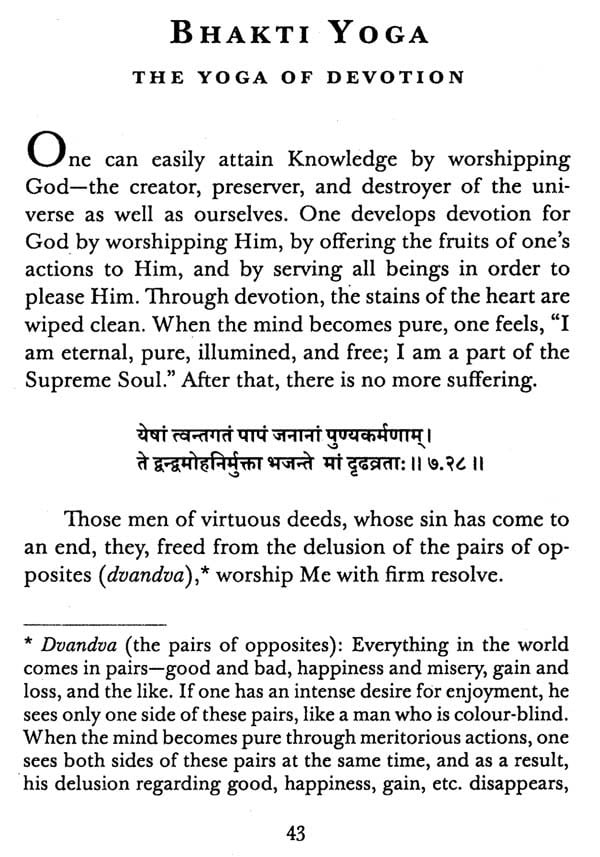 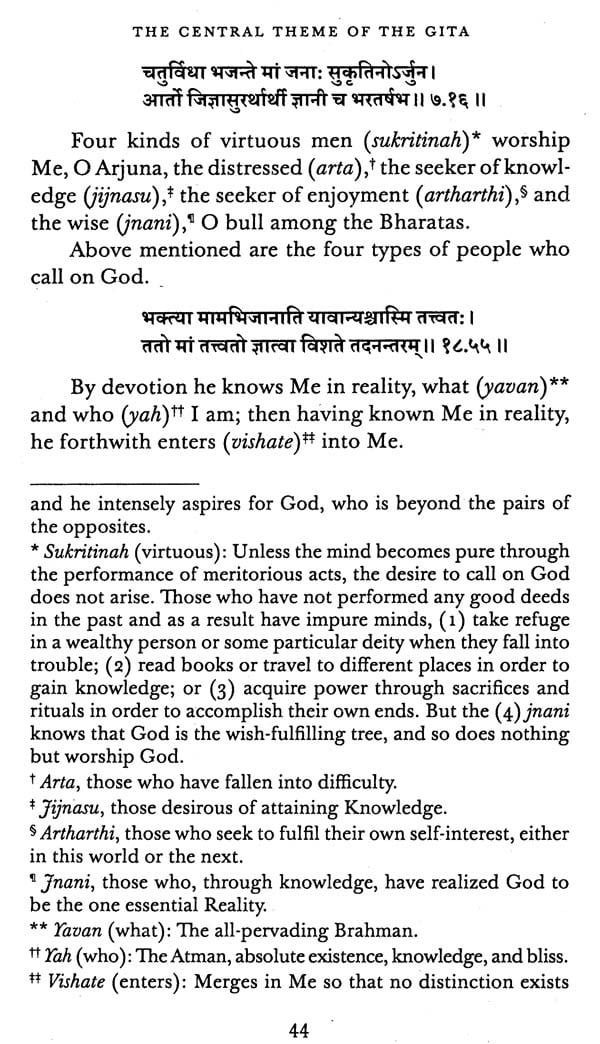