Guru Dutt (A Life in Cinema)

FREE Delivery
$24.50
Quantity
Usually ships in 15 days
Notify me when this item is available

Guru Dutt died in 1964. After four decades, and with each passing year, his films continue to have a remarkable impact on Indian cinema. One of the first books in English on this extraordinary filmmaker, it provides an account of the life and work of a great cinema master who skilfully succeeded in bringing new meaning, individuality, and lyricism to the repetitive ingredients of formulaic Hindi popular cinema.

Nasreen Munni Kabir traces the life of this gifted and unusual man through studies of his films and many interviews with his family, friends, and colleagues. The book describes in careful detail the making of such classics as Pyaasa, Kaagaz ke Phool, and Sahib Bibi aur Ghulam, providing invaluable information for those who know the quiet brilliance of Guru Dutt's films. Technicians, music directors, actors, and others who worked closely with Guru Dutt, recount the experience of knowing him, and their memories uncover aspects that are less known.

Originally published in 1996, this was one of the first in-depth studies of an Indian director, some years before 'Bollywood' and anything associated with it had stirred curiosity across the world. This new edition with appealing visuals brings to life Guru Dutt's vivid and complex personality through observations on his films and through the voice of the many who knew him.

Complete with photographs and a filmography, this book is a must-have for all cinephiles, especially the general reader, and the student interested in Indian cinema.

Nasreen Munni Kabir is a London-based filmmaker and author. She has made several documentaries for Channel 4 TV (UK), including In Search of Guru Dutt (1989) and The Inner World of Shah Rukh Khan (2004). She has authored several books on Hindi cinema, including Talking Films (OUP 2002), Talking Songs (OUP 2005), and The Immortal Dialogues of K. Asif's Mughal-e-Azam (co-authored with Suhail Akhtar, OUP 2006).

Since the late 1970s when I first began programming Indian films for festivals and television in Europe, it became clear to me that Guru Dutt's films were the most engaging of the Hindi cinema selection and were equalled only by the enigmatic and often tragic character that he himself assumed on screen. I soon discovered that I was far from being the only one struck by Guru Dutt and by the special lyricism that haunts his films; there were thousands of people-both young and old-who never hesitated to quote his name when asked to recall a favourite director. Curtains billowing in the breeze, papers flying in the air like the last flutter of autumn leaves, a lonely figure moving discreetly between light and shade-these images continue to stir countless people for whom Guru Dutt's art remains a vital living force more than three decades after his death.

Some years later, in 1987, when I was making a Channel 4 documentary series on Hindi cinema titled Movie Mahal, a special feature on Guru Dutt was a natural choice. Though Guru Dutt had died several years earlier (and his wife Geeta had died on July 20, 1972), I was lucky enough to get to know many members of his immediate family. My first encounter with his son Tarun had taken place in 1982, and when I met him again to talk about the Channel 4 documentary, he was happy to help with film excerpts and information. Tarun so resembled his father- especially when he smiled with that familiar half-smile of Preetam or Kalu-that it made Guru Dutt's absence be felt even more acutely. The research for In Search of Guru Dutt (1989), the resulting three-part documentary, involved extensive interviews with Guru Dutt's family, friends and with many of the people who had worked most closely with him during his tragically short life: excerpts from those interviews, together with extensive clips from Guru Dutt's films, provided the substance of In Search of Guru Dutt. The title for the documentary came from an experience when visiting Guru Dutt's uncle, B.B. Benegal, one evening in 1986. As I started walking up the three flights of stairs to his studio in Calcutta, the lights went out, leaving me in the darkness. On all fours, I groped my way up each step thinking to myself that the final programme just had to be called 'In Search of Guru Dutt'. When I finally arrived at Mr Benegal's door, he opened it and shone his flashlight in my eyes and said, 'Where's your torch? This is Calcutta, you know!'

The most frustrating part of those years of research was knowing that Guru Dutt himself would never speak of his films or his life. The cruel irony of belated recognition has visited itself on many artists, and if we think of the posthumous recognition of the poet Vijay of Pyaasa, it could be said that Guru Dutt had a premonition of being among such artists; indeed, his contribution to Indian cinema has only been fully recognized some years after his death in 1964. In this respect the words of John Berger, in his book About Looking (Pantheon Books, New York 1980) on the life and work of the Italian sculptor Giacometti, strike one as applying so very closely to Guru Dutt also:

Every artist's work changes when he dies. And finally no one remembers what his work was like when he was alive. Sometimes one can read what his contemporaries had to say about it. The difference of emphasis and interpretation is largely a question of historical development. But the death of the artist is also the dividing line ... The reason Giacometti's death seems to have changed his work so radically is that his work had so much to do with an awareness of death. It is as though his death confirms his work: as though one could now arrange his works in a line leading to his death, which would constitute far more than the interruption or termination of that line which would, on the contrary, constitute the starting point for reading back along that line for appreciating his life's work.

Over the past few years, I have felt that some of the interview material collected during my research on Guru Dutt should be made available in print because it comprises a valuable record of his life through the testimonies of his contemporaries-a generation whose own histories are inseparable from Guru Dutt's story. That idea lay behind the writing of this book, in which I have tried to follow Guru Dutt's career through his films, this biographical narrative being side-lit by the memories of those closest to him. The result is not a full biography, but rather a memoir and a tribute to one who was variously seen and loved as director, fellow-actor, colleague, brother, father, son or artistic mentor.

Sadly, since 1985, many of those I interviewed have passed away-among them B.B. Benegal, Pandit Narendra Sharma, Tarun Dutt, Raj Khosla, R.D. Burman and Atmaram; and this further reminder of the uncertainty of existence underlines the importance of preserving reminiscences and perspectives. 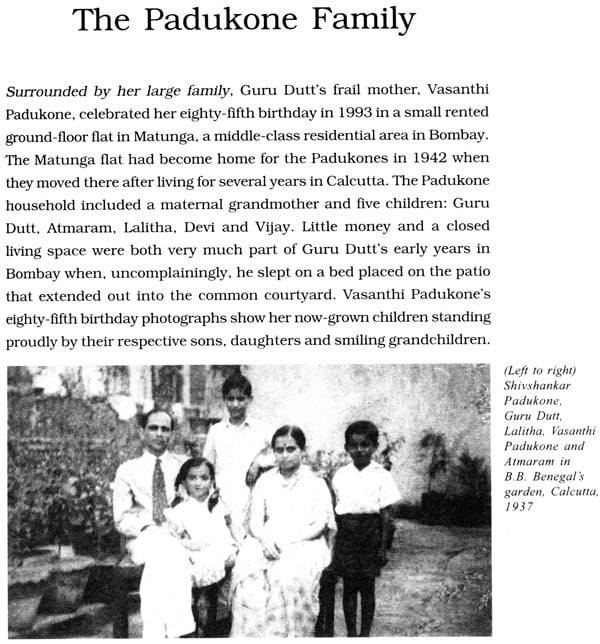 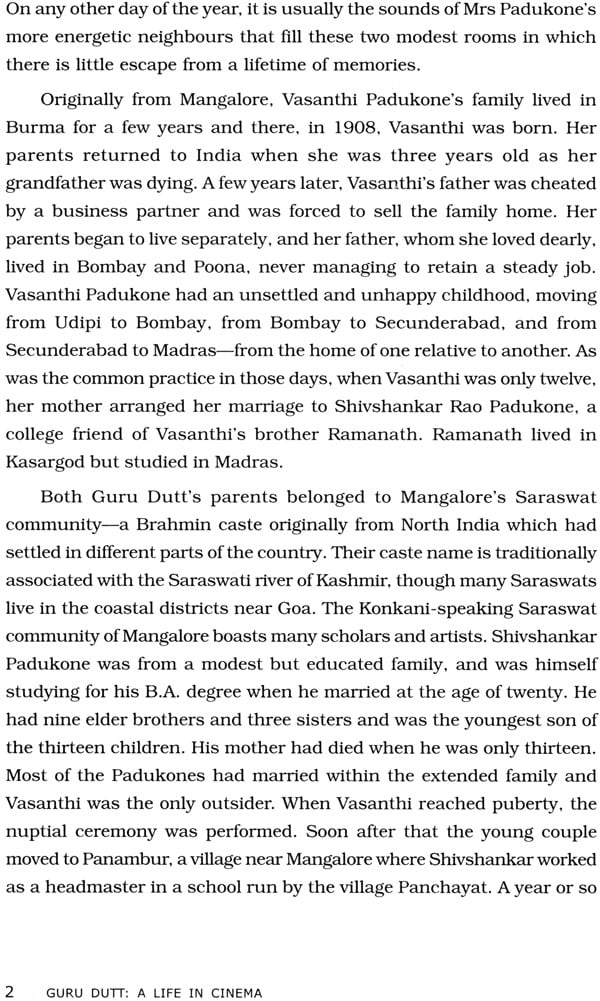 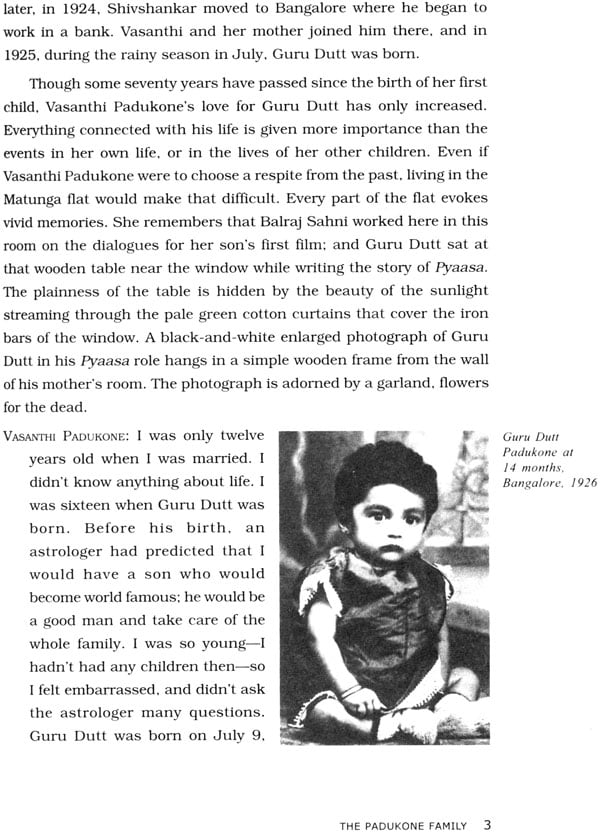 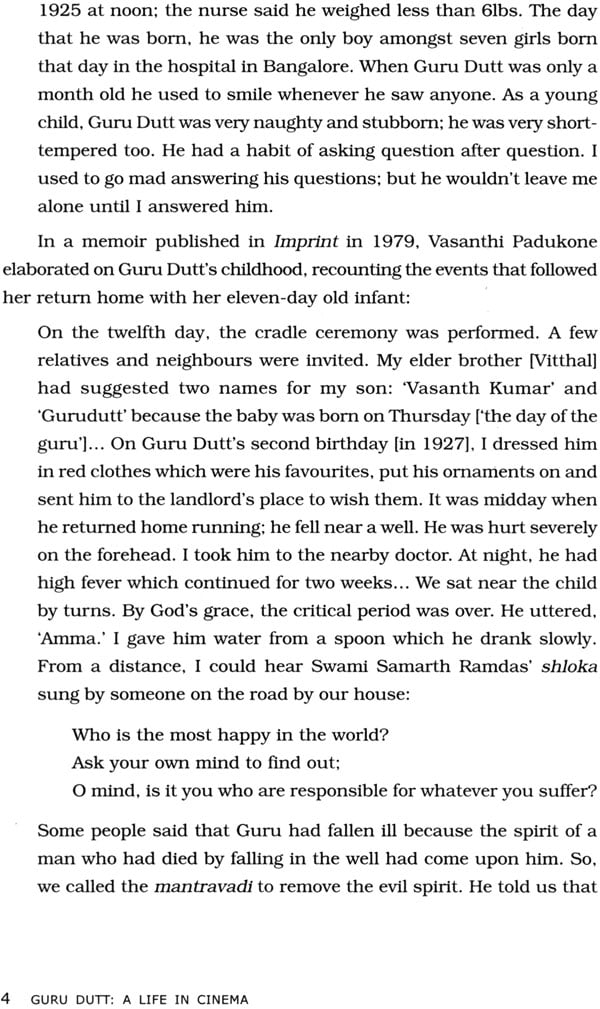 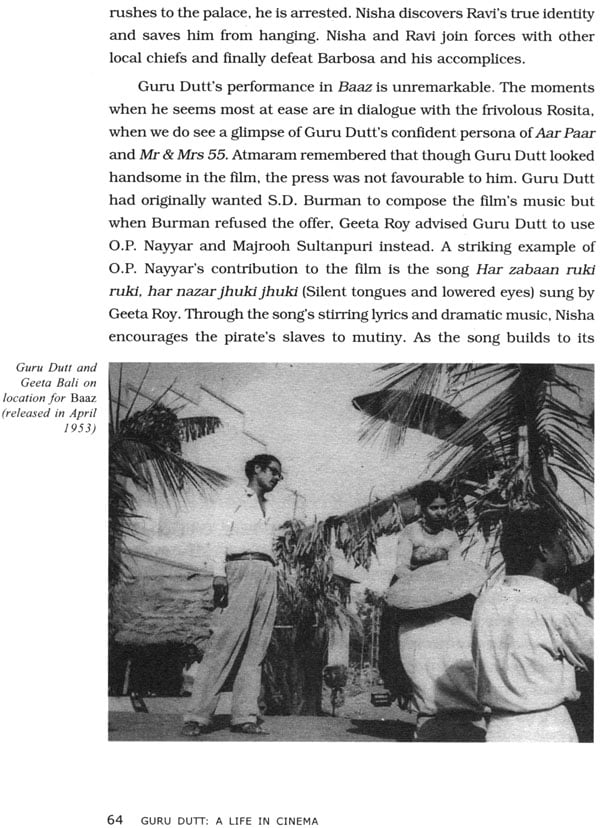 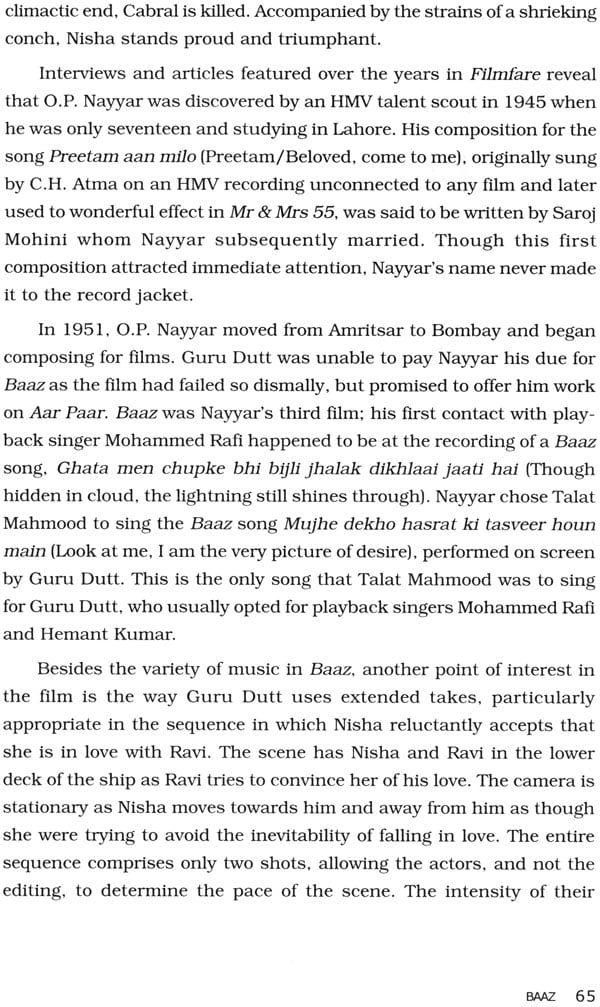 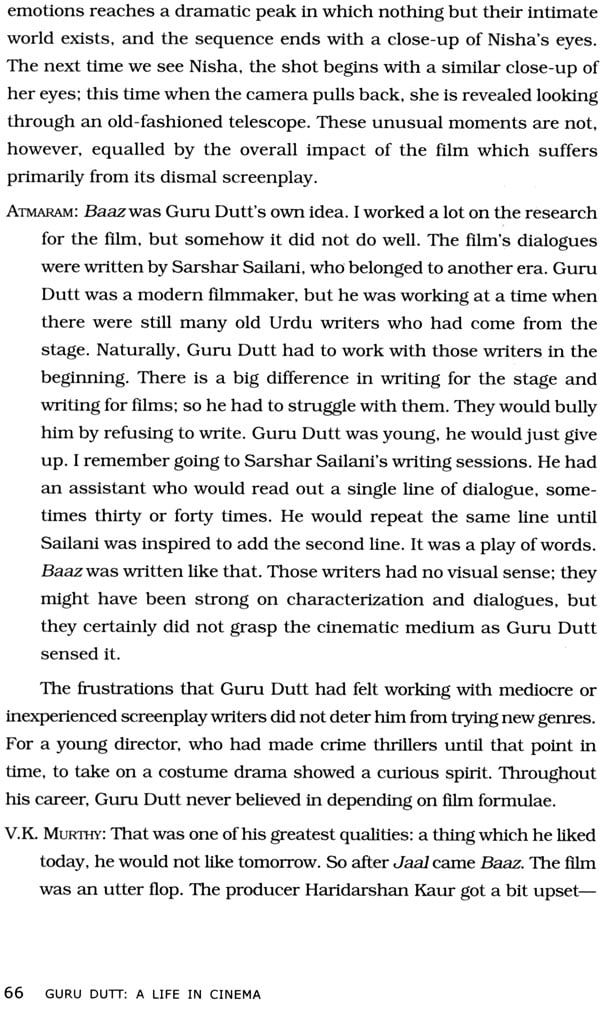 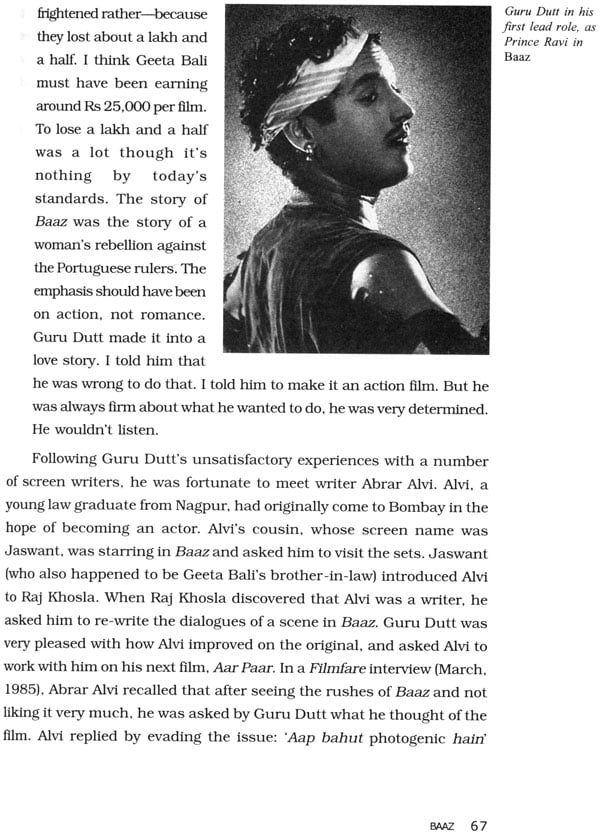 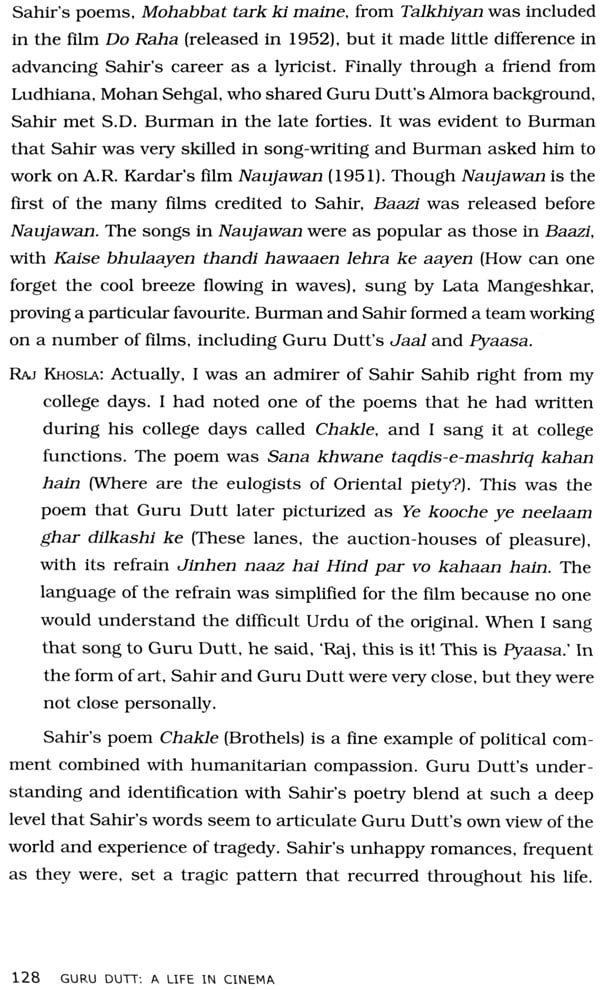 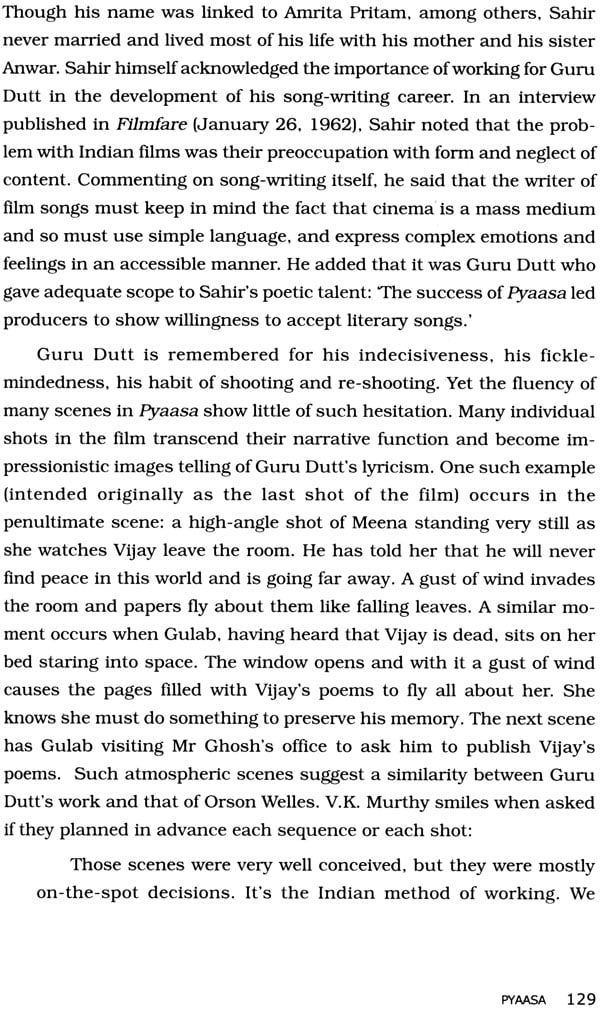 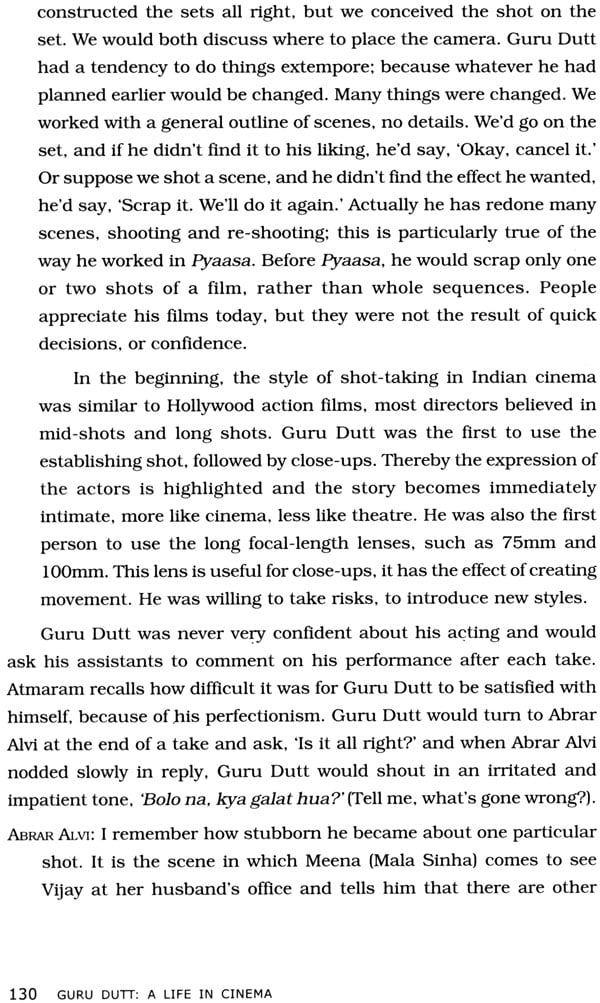 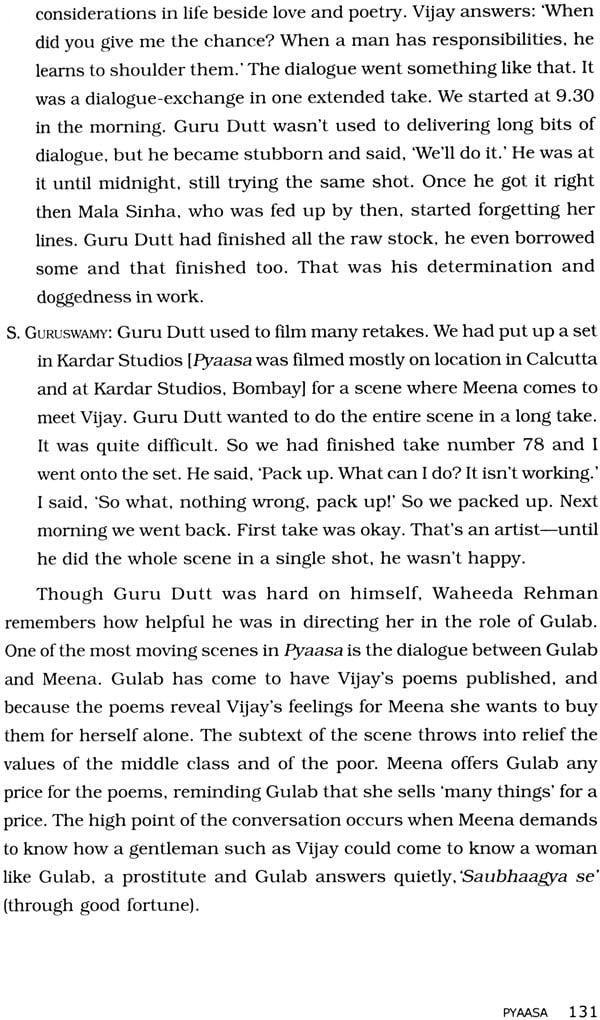 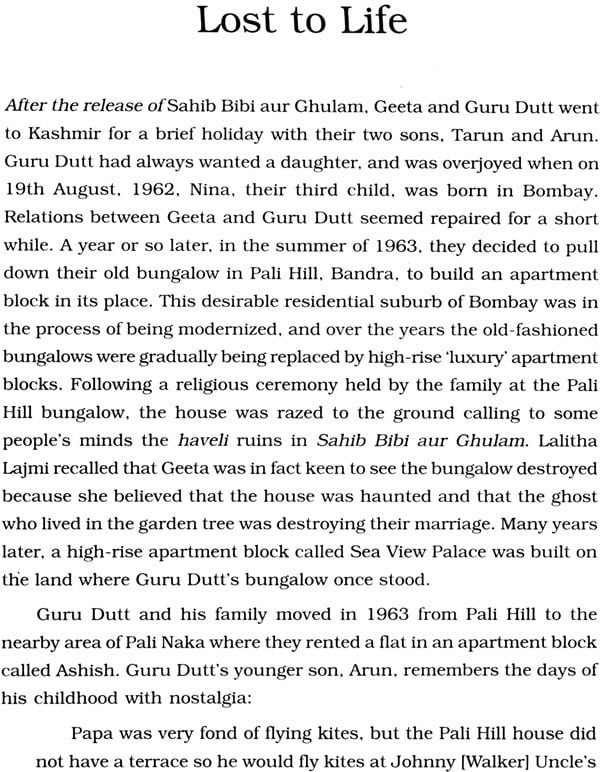 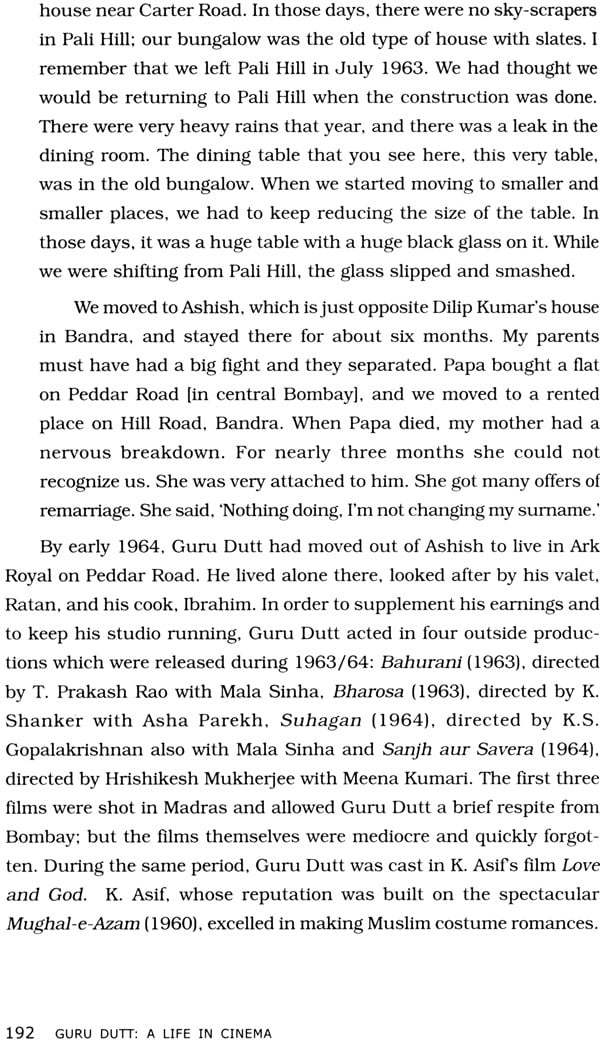 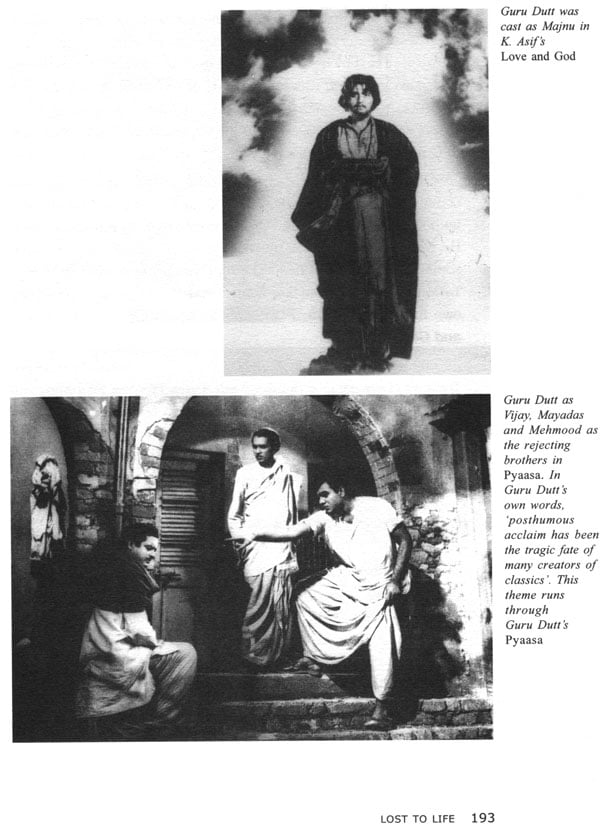 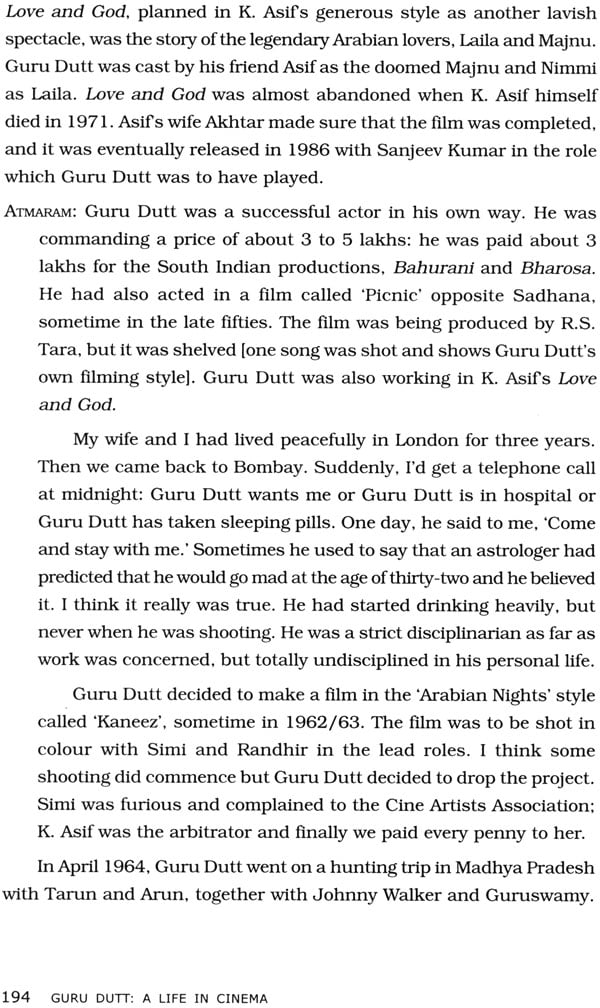