This book is a collection of essays on central topics of Vedanta, arranged in a thematically connected manner. It facilitates a look inside the system from certain vantage points, which are the topics divided into the main body and an appendix. The topics in the main body are : Being (sat); Maya and the Discourse about Brahman; Transcendence  and the Transcendent Via the Doctrines of Brahman and Sunyata; the Notion of Avidya; Macro-Micro-Cosmology Approached through the Gita Text; Time within Logos and without as in Grammar Philosophy and Madhyamika; Self-Knowledge; the Jivan-Mukti Ideal. The appendix consists of a few essays on language written from the Vedantic point of view.

J.G. Arapura (b. 1920, Kerala) completed his education in India, and then proceeded tot he United States. he obtained his Ph.D. from Columbia University. He was a Fellow of Indian Institute of Philosophy, Amalner (Maharastra). He studied Vedantic texts under the guidance of specialized Sanskritic scholars at Varanasi and Maharastra.

Dr. Arapura has been teaching in North American Universities for nearly the last three decades. At present, he is Professor of Eastern Philosophies and Religions at McMaster University of Canada.

Dr. Arapura has written extensively on Vedanta and Comparative Philosophy. His published works include: Radha-krishnan and Integral Experience (Asia); Religion as Anxiety and Tranquillity: An Essay in Comparative Phenomenology of the Spirit (Mouton); Gnosis and the Question of Thought in Vedanta; Dialogue with the Foundations (Martinus Nijhoff).

The project that has resulted in this volume began with the selection from my past essays on Vedanta, published and un- published. The thought to do that came largely at the urging of friends, who persuaded me about its usefulness. However, as I proceeded, I began to completely rewrite several of the essays in ways that reflect my recent, deeper involvement in the topics in question as well as in hermeneutics, with the result that the pre- sent volume has turned out to be much like a new work. Besides, in this way I was able to integrate the various pieces into a unified whole in such a way that it might serve as a companion volume to my recent, major work, Gnosis and the Question of Thought in Vedanta, or at least as an auxiliary.

In these days of increasing enchantment in much of the world with Eastern religions and philosophies, real academic interest in Vedanta has, paradoxically enough, waned. This shift away from the very heart of Indian tradition, visible even among the Indians, may be partly the signs of the times, but is at least partly due to misunderstanding of the nature of the system. That Vedanta is the supreme tradition of India may still be conceded by most scholars, even if they tend not to act upon it. It may be said that of all the Eastern systems it has unequalled philosophical possibilities. These essays here collected have been produced with that awareness. While no great merit can be claimed, or is claimed, for these pieces themselves, it can be affirmed truthfully that they embody an honest effort to take a look in- side a tremendously rich realm of the spirit from certain points in its enclosing ramparts. These 'points' give the topics dealt with, and in that sense, it is hoped that they do afford us a view of the inside of the system as a whole.

These essays are mostly written from a comparative perspective, that is, in the currently prevalent sense of the word 'comparative', and that would be considered natural in our present day situation, decisively formed as it is not only by the respective traditions of the East but also by the 'pervasive influences of Western thought. While the perspective is comparative throughout, either explicitly, or implicitly in a few pieces, there are some specific acts of comparing as well.

It will be noticed that the essays have been described in the title of the volume as hermeneutical rather than comparative. Why this is so is a question that will involve us in the as yet un- thought problem of interpenetration of hermeneutics and comparison, or rather the place of the latter in the former. But without going into it deeply, suffice it to say that hermeneutics is to be perceived as that to which comparison itself leads and is its ultimate justification for being undertaken. But it may also be added, reversely, that comparison is an essential dimension of hermeneutics, though that fact has not yet been brought up to conscious recognition either by comparativists or by hermeneutists.

Now, as for hermeneutics, despite its various developments and expressions, it is basically, to borrow a definition from Hans-Georg Gadamer, one of its most eminent exponents, "the theory and practice of understanding and bringing to language, the alien, the strange, and whatever has become alien" ("On the Natural Inclination Toward Philosophy", Reason in the Age of Science, trans. F.G. Lawrence, Cambridge, MS, & London, The M.LT. Press, 1982, p. 149). We might add that "the alien, the strange, and whatever has become alien", is in the hermeneutical situation, a description of something that confronts us -and concerns us-and to some degree claims our attention and wants to be brought to understanding. In this situation comparison initiates itself as a perspective and is perfected, some- times through specific acts of comparing, as understanding itself is perfected. But reversely, understanding is thwarted by the vicissitudes of comparison-undoubtedly, we have here a two- way street. And then misunderstanding comes in, against which, however, there is no insurance. How do these vicissitudes of comparison come about? They come about through our imagining that the goal is discovery of similarities, no matter whether correct or incorrect. But hermeneutics as a true intellectual discipline will assist us to guard against it, though not insure against it, and to press on towards understanding, which lies beyond the apprehension 'of similarities and dissimilarities.

The aim of these hermeneutical essays on various and sundry topics is the understanding of Vedanta, at least as much as in them lies to put it on its way. The topics themselves are nothing out of the way in as much as they are but normal foci of customary meta- physical discussions of this kind, i.e., Being, the self, truth, ultimate reality, language, phenomena, knowledge, etc. But they are approached in a rather different way from usual, that is in a manner which shows a leaning towards what the Greeks called logos, thus emphasizing an essential character of Vedanta constantly missed both in the mystical and rationalistic interpretations of that system. The position taken in the essays, often explicitly expressed but sometimes remaining only implicit, is that the uniqueness of' Vedanta consists in the Indian variant of the logos (vak or sabda), upon which it is squarely grounded. 'But in coming by this position much inspiration had been received from certain crucial ideas of modern European ontology of the phenomenological-existential kind, which take up, no doubt, with a very modern thrust, from where Greek antiquity and, in some cases the philosophical dimensions of the original Christian phenomenon as well, left off. The interest in the parallel, and at the same time very different, development of the Indian logos fully preserved in Vedanta and in its own modern possibilities and also the conviction about Vedanta's phenomenological and existential uses are the motivations behind much of my work in this field, and they will be visible in these essays too.

A word may be said in elucidation of the explicit religious character of all the essays, evident in the prominence given to matters of comparative religion and theology. The Vedantic logos, that is to say vak or sabda, warrants, and is inseparable from, the notion of revealed texts (sruti). Accordingly, philosophy in Vedanta is always at the base theology inasmuch as it is the re-expression and development in human terms of an a priori self-disclosure of Ultimate Reality itself. This self-disclosure is not primarily in man's soul, as the mystics would have it, but in pronounceable, ordered, objective texts (Vedas), which have even suggested their own interpretation and also given rise to certain precise disciplines for their grasp and their use. In this manner Vedanta does belong to the family of revealed religions. But on the contrary, it retains a bias towards knowledge of the ground of revelation, of the logos itself, without insistence on faith in the particularity of a particular revelation, and in this it is still equally akin to the Greek tradition. Vedanta in its theology seems to embody a type that stands mid- way between the highly particularized logos of a religion like Christianity and the unparticularized logos of the Greeks, and yet sharing traits of both. However, none of the essays emphasizes the formal aspects of theology, as such was not the intent. What is really aimed at is the modern phenomenological and existential uses to which the theology or ontology of Vedanta can be put.

In the fourth paragraph of this Introduction I referred to the interpenetration between comparison and hermeneutics. The awareness of that has been a dominant background of this work, although written in the manner not so much of a theoretical expression as of concrete exemplification of it. Thus it can be seen that the comparativist-hermeneutical activity sometimes takes place in a framework of contrast within kinship (Vedanta and Buddhism), sometimes showing kinship (or unexpected closeness) within difference (as made possible by the ways of the logos/language), though generally as alternatives between a still lively, unique antiquity (Vedanta) and the dominant world of modern thought grounded in the dialectical coincidence of Greek philosophy and Christianity. These foci are more sharply presented in the Appendix: On Language, as ultimately language itself is the bearer of all these issues. 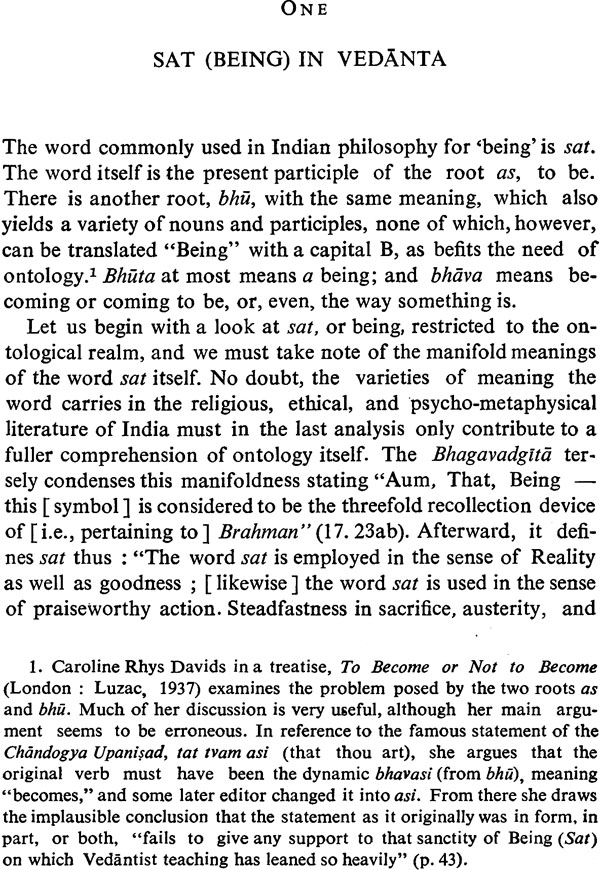 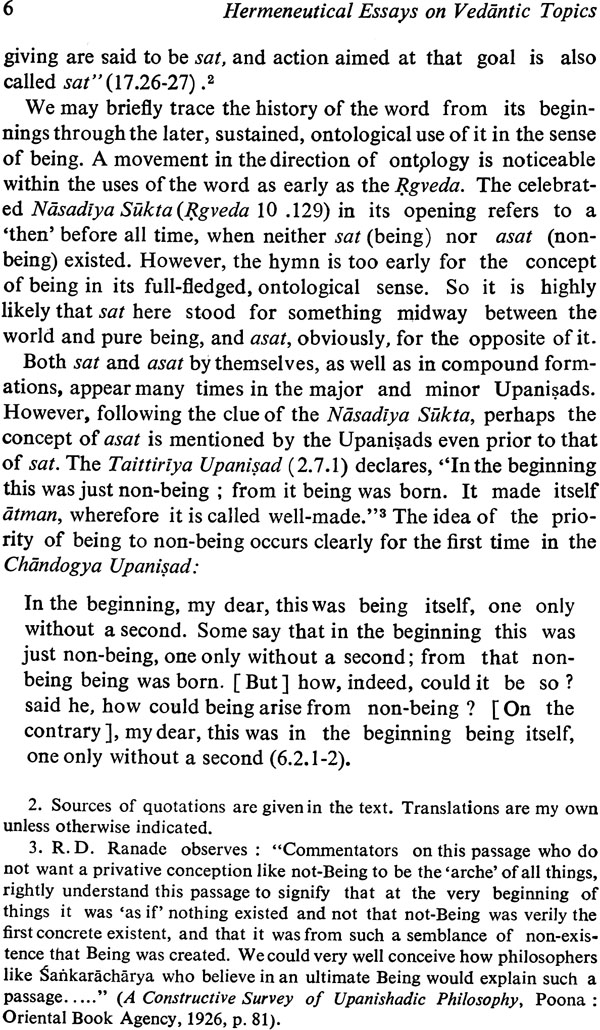 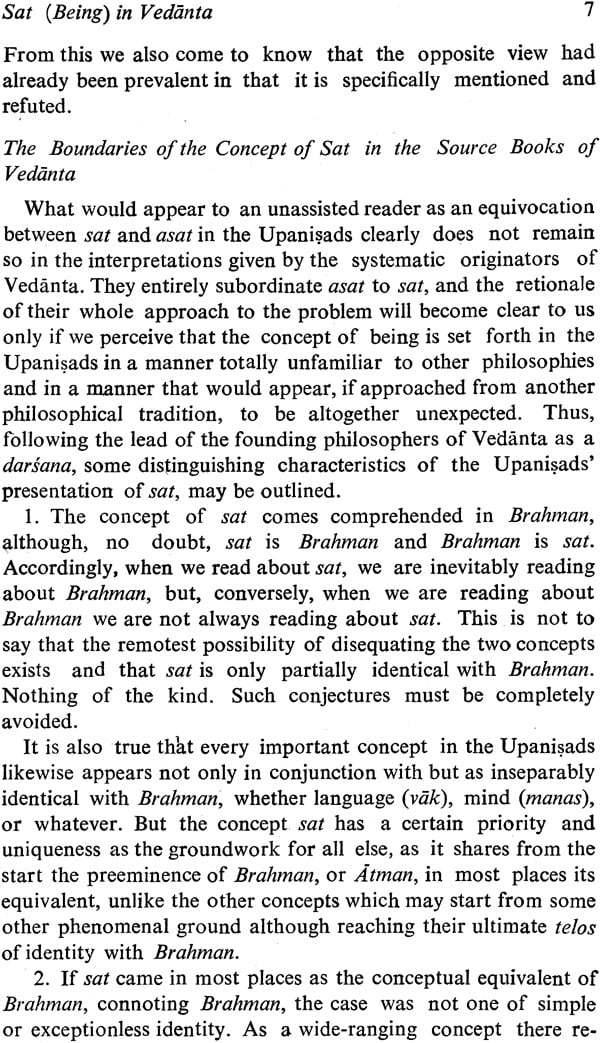 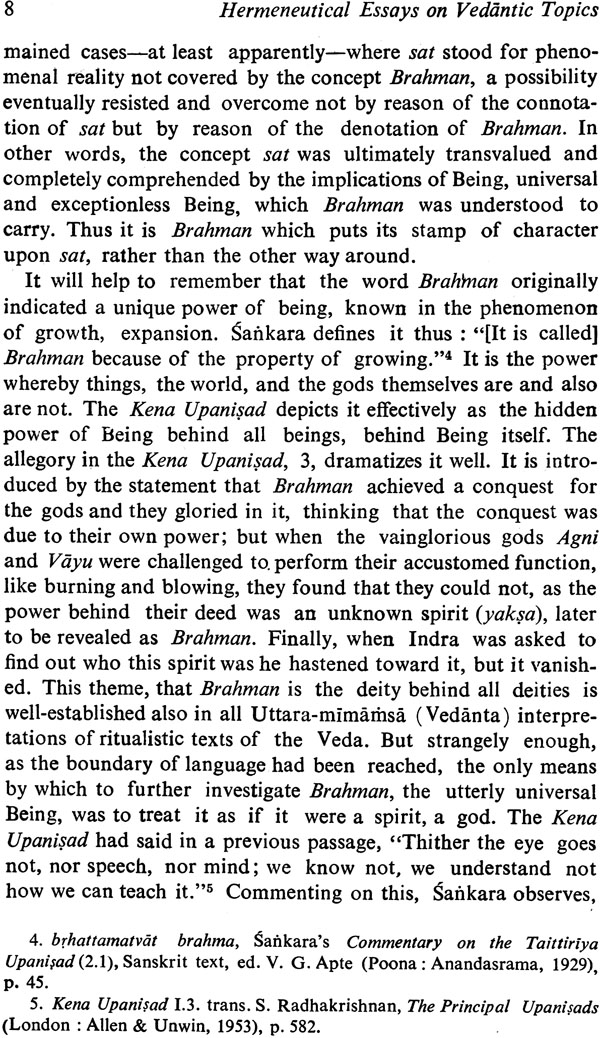 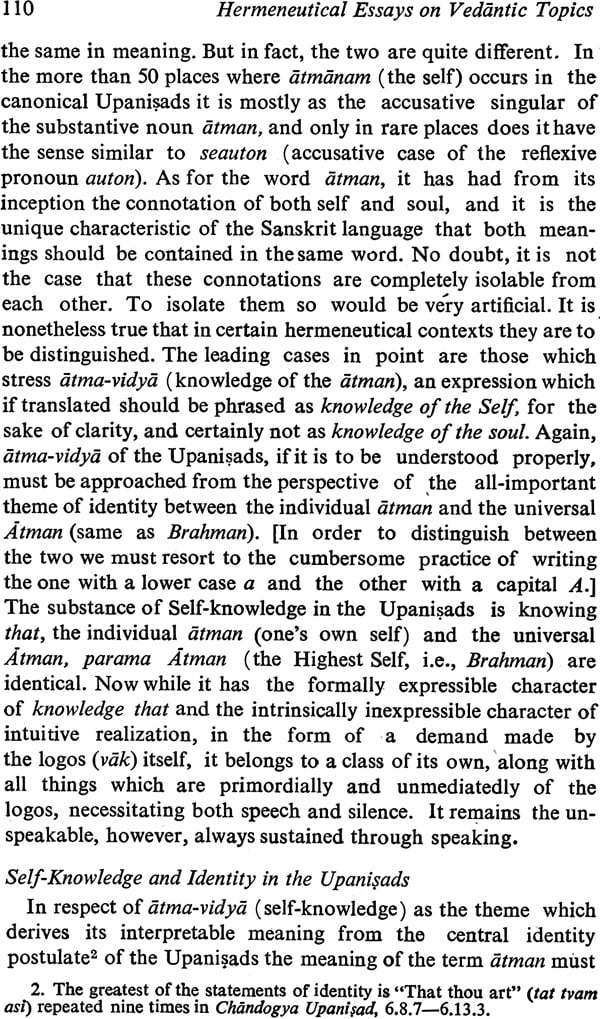 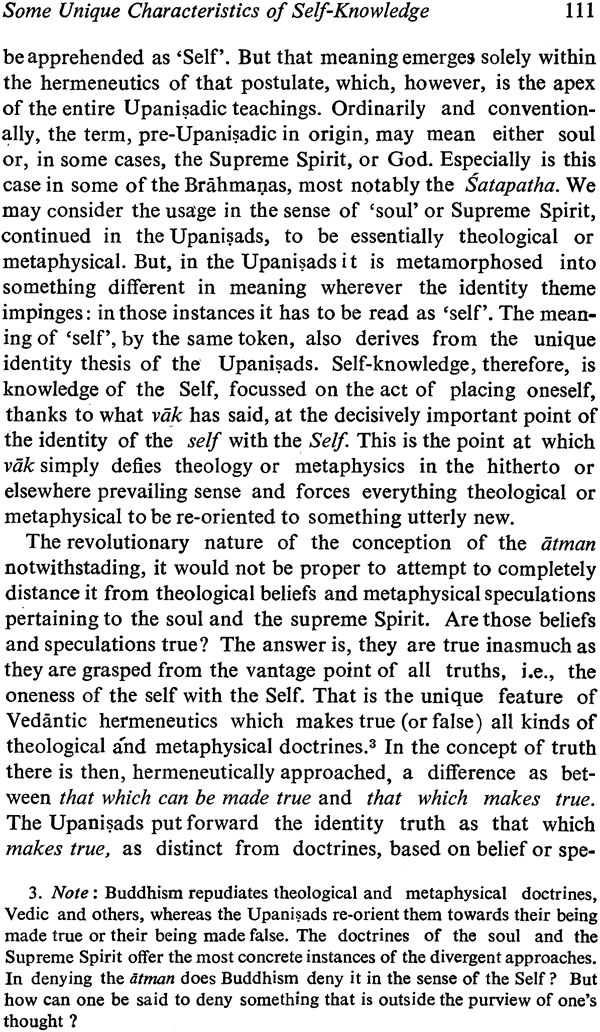 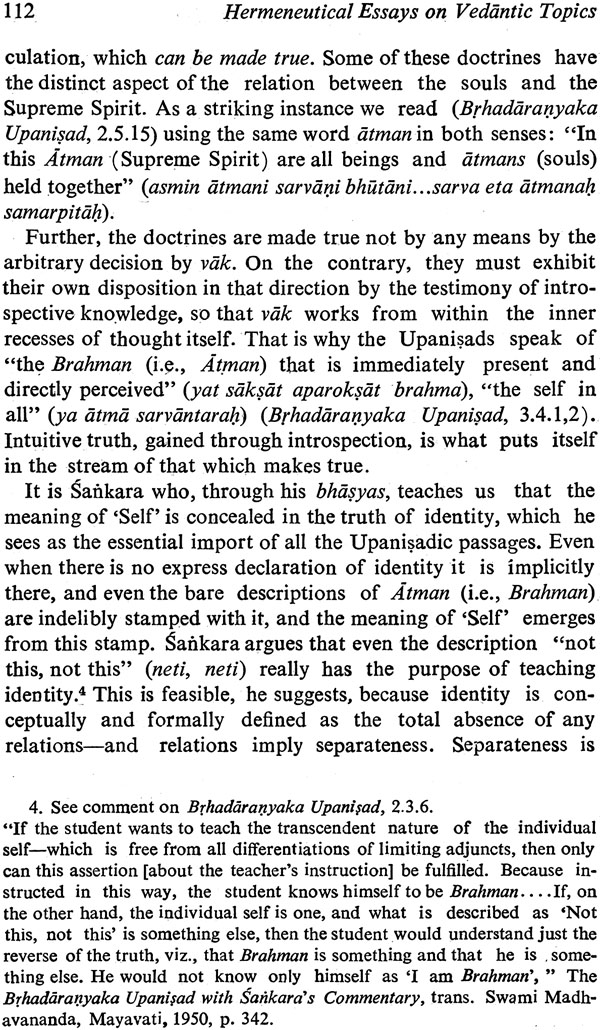 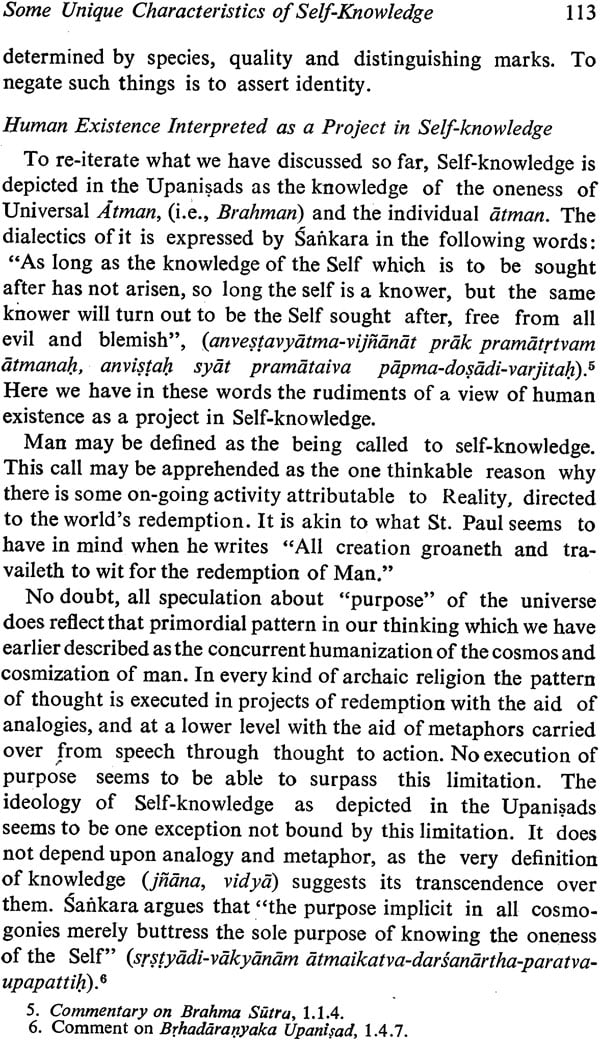 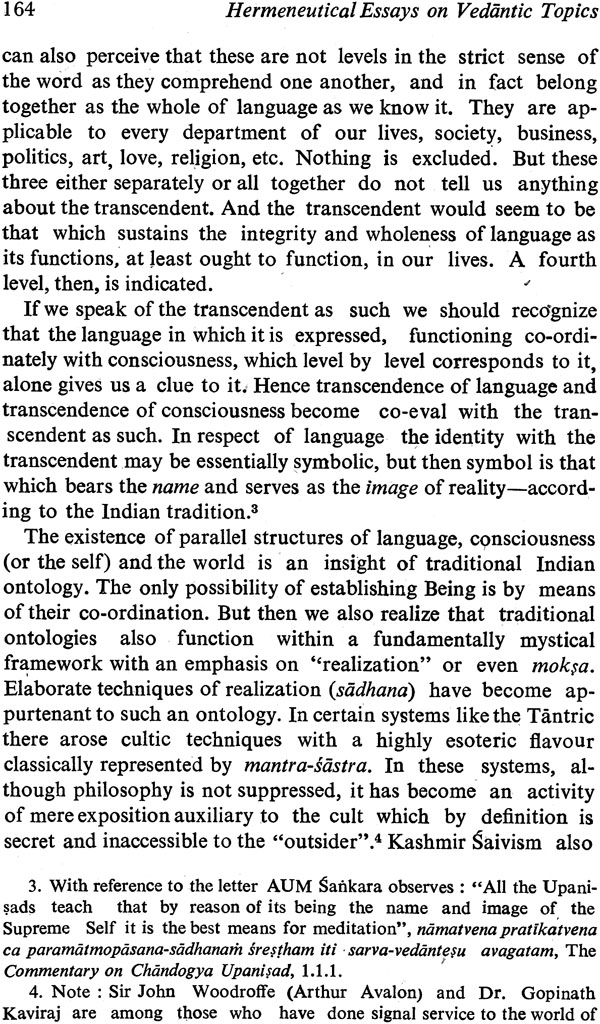 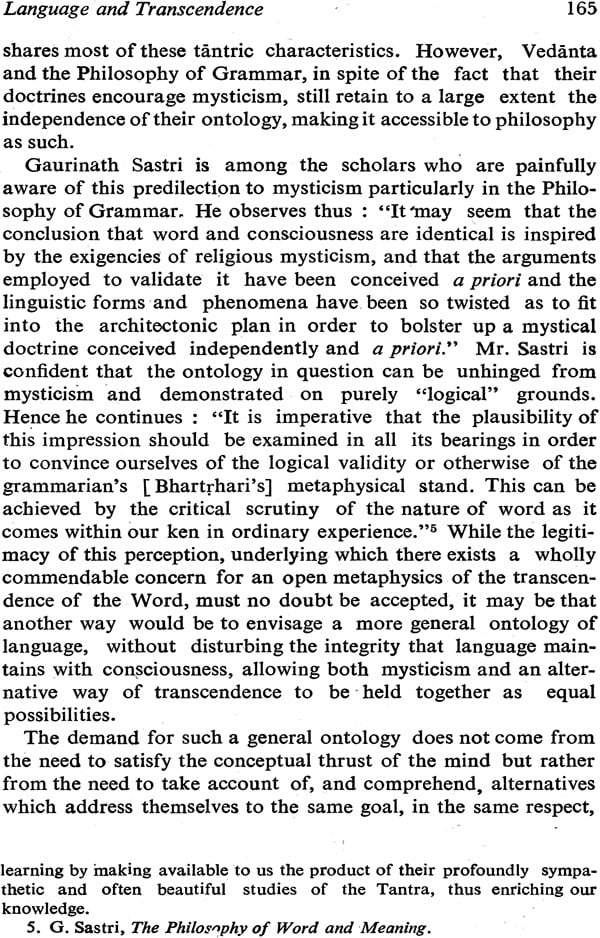 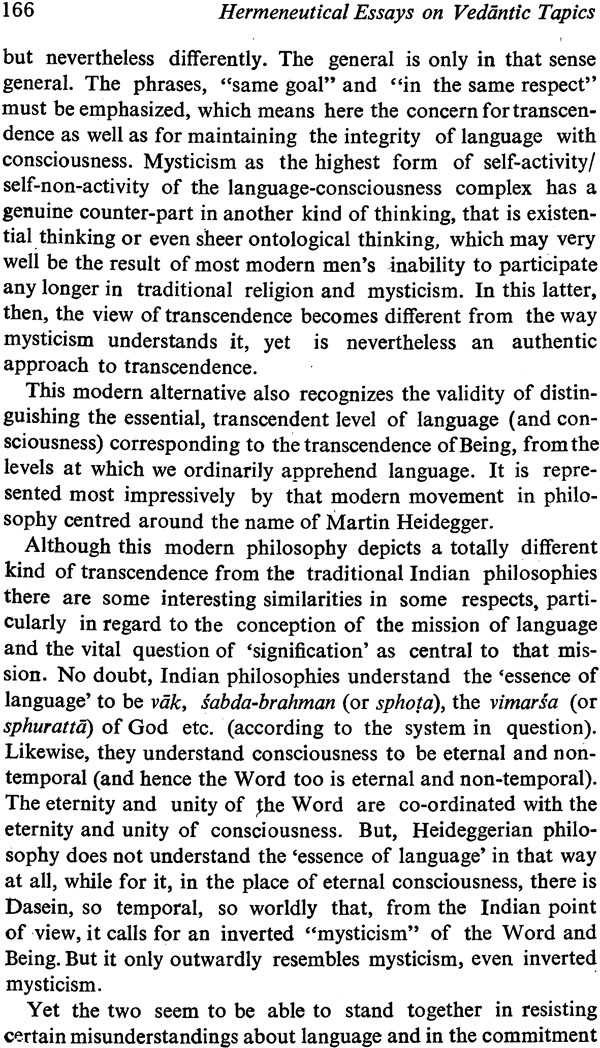 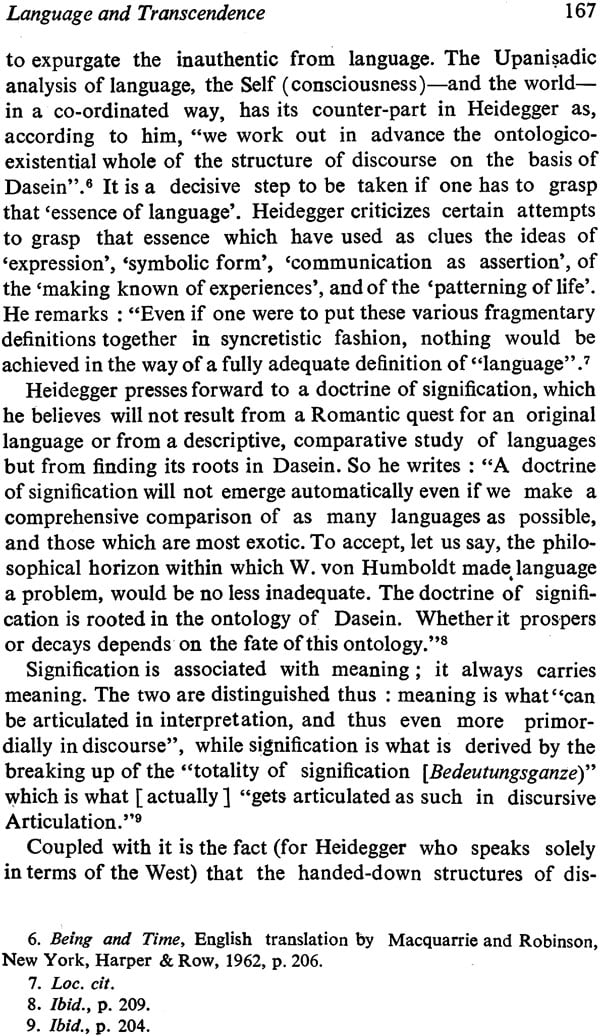 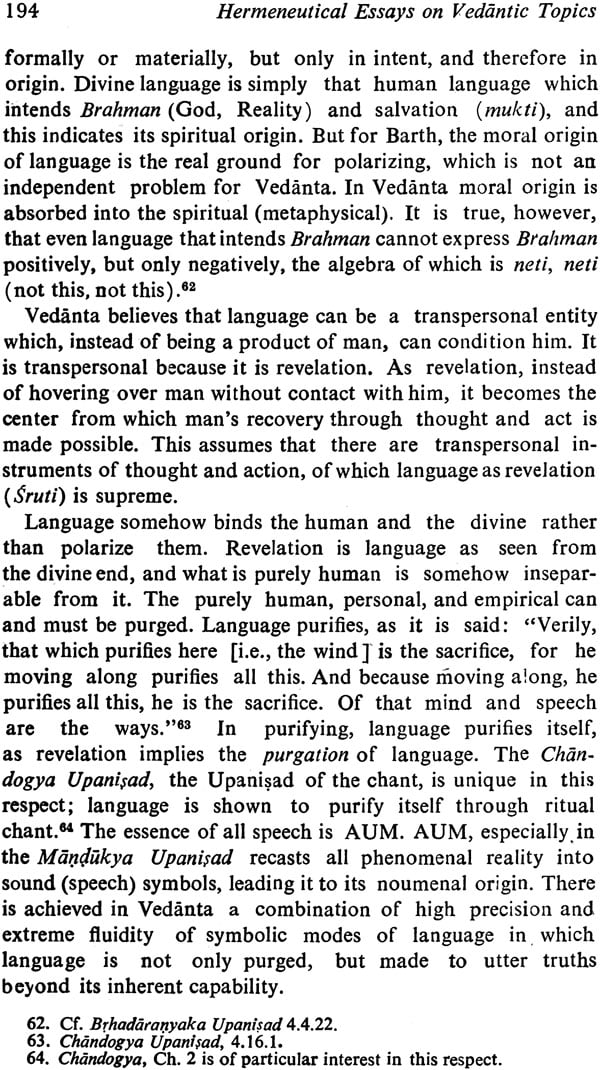 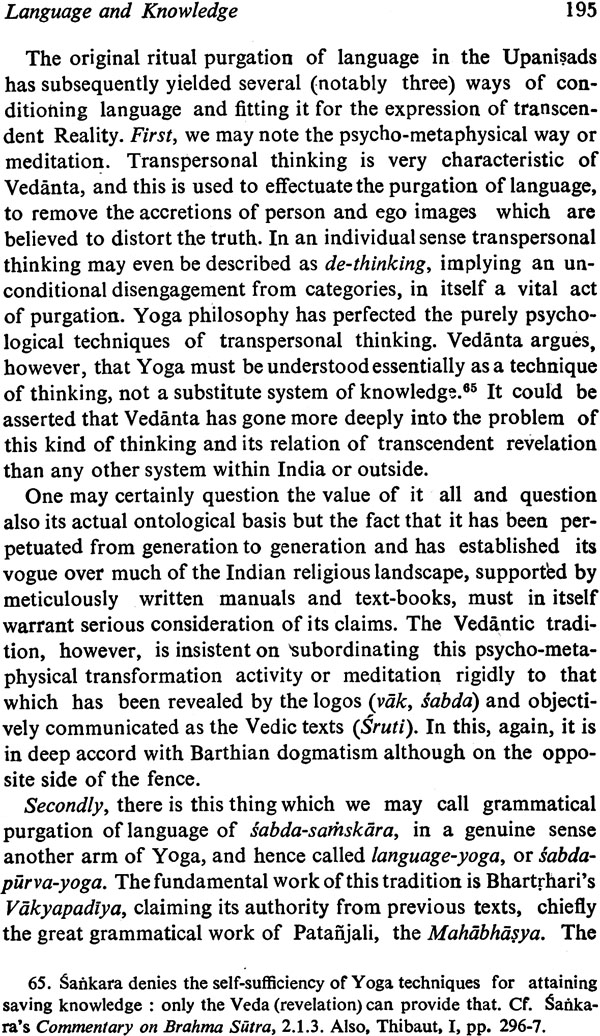 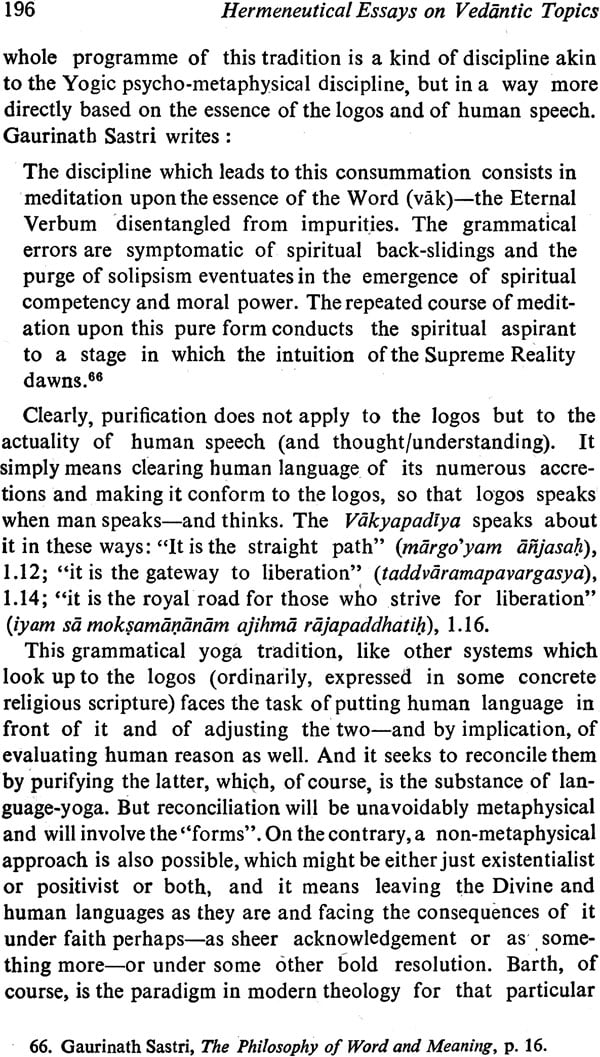 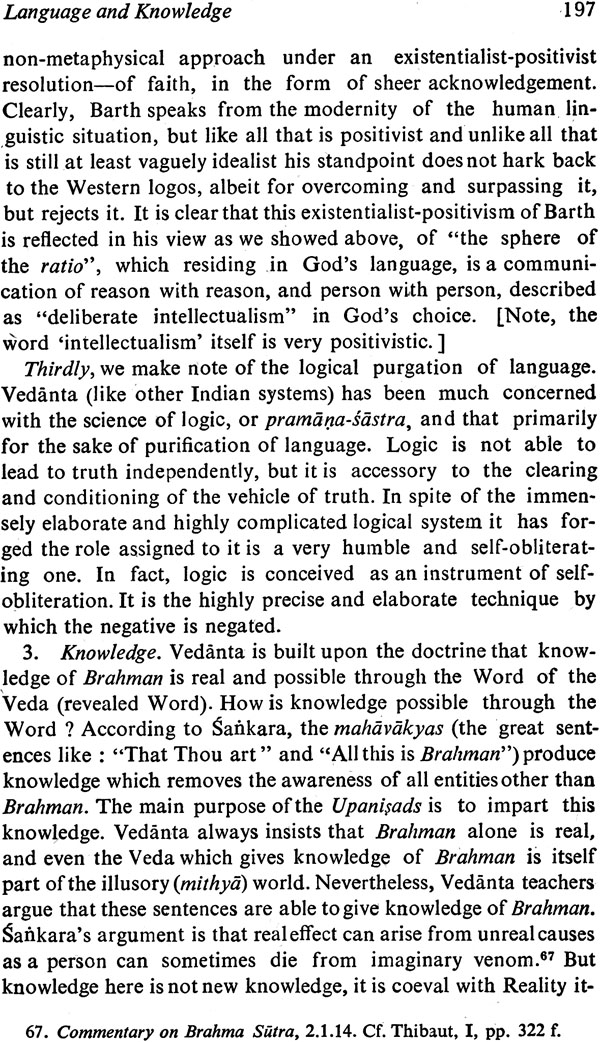 Towards a Critique of Cultural Reason
By R. Sundara Rajan
$29
FREE Delivery