Hinduism - From Maya to Moksha

This book is no ordinary work on Hinduism. It, in fact, is an academic study, done in a dispassionate and comprehensive manner, of an inclusive way of life, which has evolved along-with the evolution of mankind. It brings, to the doorstep of a common reader, the travails of the history, creative genius behind mythology, essence of philosophy, various means of spiritual attainment and utility or otherwise of practices of this most misunderstood and maligned religion. Both the strengths and weaknesses of this religion of eternity, Sanatan Dharma, have been flagged emphatically. Misplaced perception of multiplicity of gods has been demolished, with great conviction.

This book has highlighted the fact that Hinduism, though religion of antiquity, is not only equally relevant today, but is also fully equipped to face the challenges of future. Such a perspective can instill bonding, pride and confidence in adherents of this great stream of liberal thought. It can also help others in acquiring an appropriate understanding of this great tradition of universal brotherhood.

Born at Maler Kotla in 1951, Vijay Singal is a leading author on subjects relating to human behaviour. His earlier books on philosophy, psychology and spirituality have been widely acclaimed. Through his coffee-table books, he has also depicted religious, social and cultural life of many parts of India.

Hinduism is not a final dogma which has to be believed in blindly by everyone or an ultimate decree, proclaimed by someone, which has to be adhered to without any application of mind. Rather, in the perpetual search for truth, it is a method of free enquiry, which has no fact to hide, no opinion to uphold, no pride to defend and no prejudice to maintain.

Unencumbered by any hierarchy of priests and unhindered by any pre-conceived hypothesis, thinkers of yore set out to explore the nature of man individually and also of the universe as a whole. Through intense tapasaya, sages of ancient India delved deep into the inner world of ego, self, emotions and consciousness and after such penetrating enquiry, they came to the conclusion that essential nature of man is divine. Behind the mortal man lies the immortal Atman; ever free, ever pure and self-luminous. They also discovered that the same divinity formed the basis of whole universe. There was one infinite and eternal reality behind all visible phenomena. This ultimate indivisible reality which manifested itself in all things and events was called Brahman.

On the basis of such investigation into the real nature of man and the cosmos emerged a spiritual tradition which later came to be known as Hinduism. The concepts of Hinduism, thus, are based not on any conjectures and surmises but on self-experience of innumerable rishis of the past. The message of this ancient and also the eternal religion is relevant for whole of the mankind and not restricted to any particular class of people. It is due to this experiential foundation that Hindu spirituality, and the culture associated with it, have stood the test of time, logic and utility. Any religion has two important dimensions, namely spiritual, shruti; and socio-political, smriti. Shruti, with its emphasis on aesthetic, ethical and spiritual growth represents the essence of religion. Bhakti-yoga, gyan-yoga, raj-yoga, karma-yoga or any other method of realization of God represent the Shruti of Hinduism. All other aspects such as myths, legends, traditions, customs etc., though important in their own right, do not form core of Hinduism.

But, unfortunately, some miracle-mongering, superstitions and other irrational beliefs have come to be associated with religion. The gullible are exploited in the name of religion. Escapism is sought to be equated with spiritualism. Such contamination of religion has resulted in inward impoverishment and spiritual deprivation. Inspire of superb technological growth, true happiness has eluded man. Machines have failed to make mankind happy. Juvenile delinquency, high rate of suicide, clinical depression and other such maladies are only the symptoms. The real reason is that the man is not inwardly satisfied. The sages of Upanishads discovered long back that there can be no end to human sorrow unless the man understands that the cravings of sense organs and the mind cannot remain satisfied for long. He can attain the eternal bliss only when he realizes his essential nature to be bliss and bliss alone.

Unless general populace do not identify themselves with their religious traditions and cultural heritage, number of people under the category of 'atheist', 'agnostic' or 'do not know' would increase in the census figures and so would increase the emptiness in life — random shootings, unexplainable suicides and general purposelessness. Excessive dependence on religion, on the other hand, increases fanaticism and scope for clash of cultures. Hinduism, having broader outlook and balanced worldview can present a perfect balance between religious observances and secular aspirations of the masses.

Time has perhaps come when the real message of Hinduism, namely the message of spiritual unity behind all creation, is spread far and wide. This religion of peace, prosperity and joy should take a lead in filling the void so created in the human psyche and, thus, provide much needed solace to humanity. All aspects of Hinduism, its core values, non-essential aspects, religious contaminations and the role Hinduism is expected to play in coming times have been discussed briefly in the succeeding chapters. 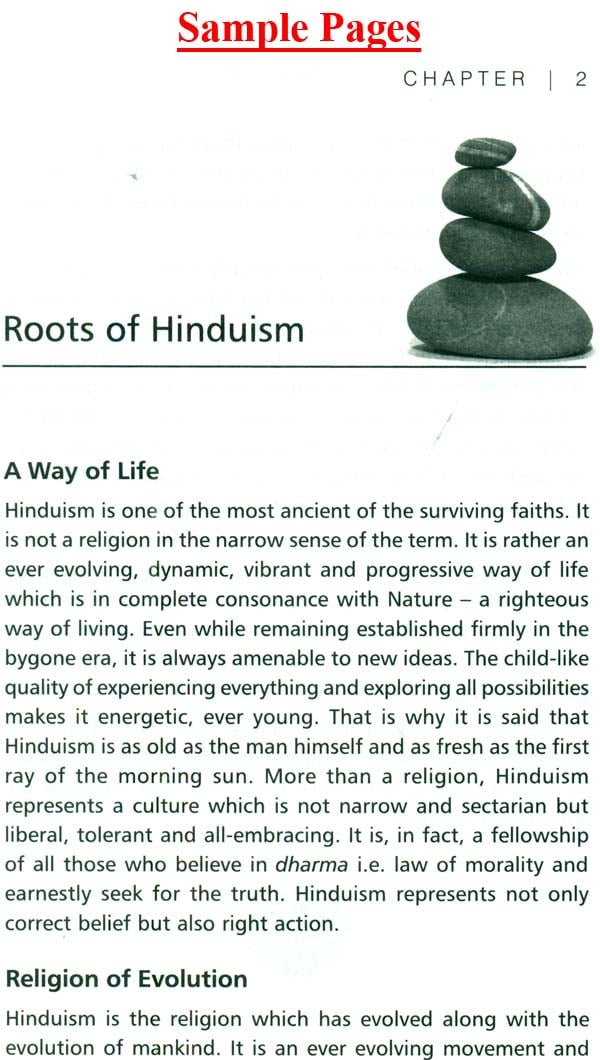 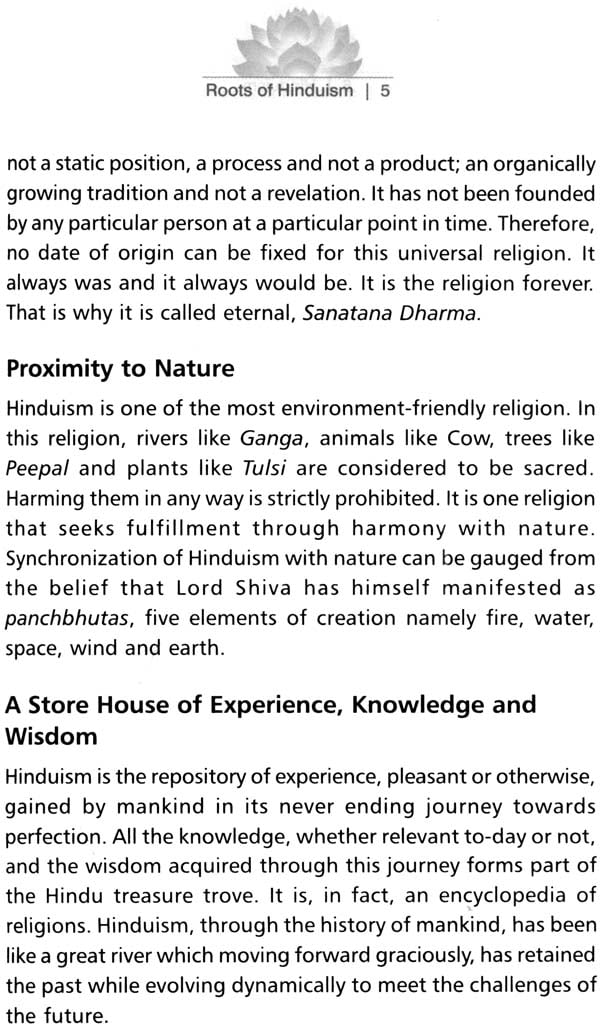 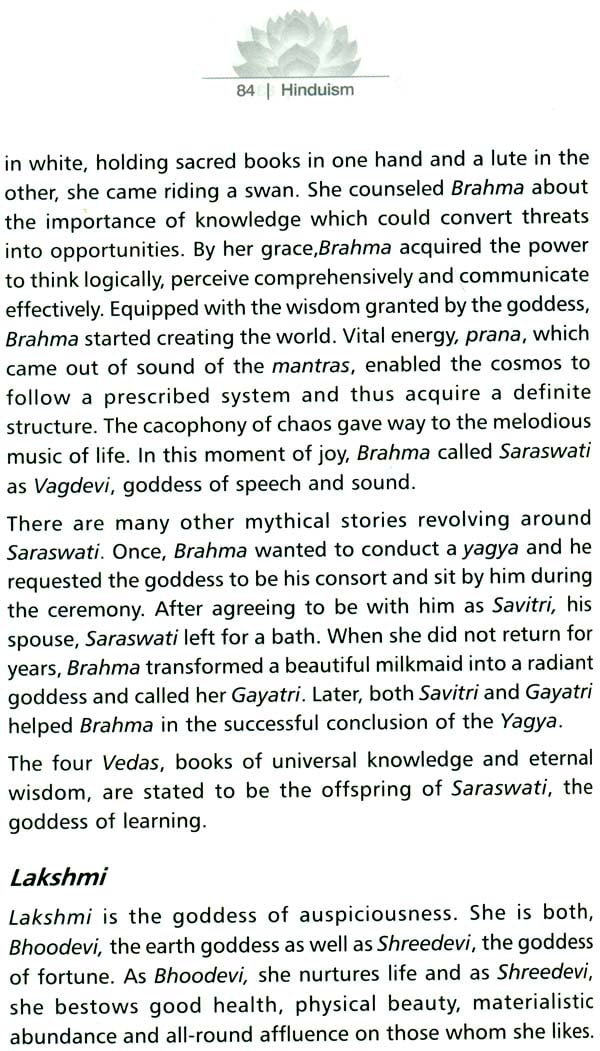 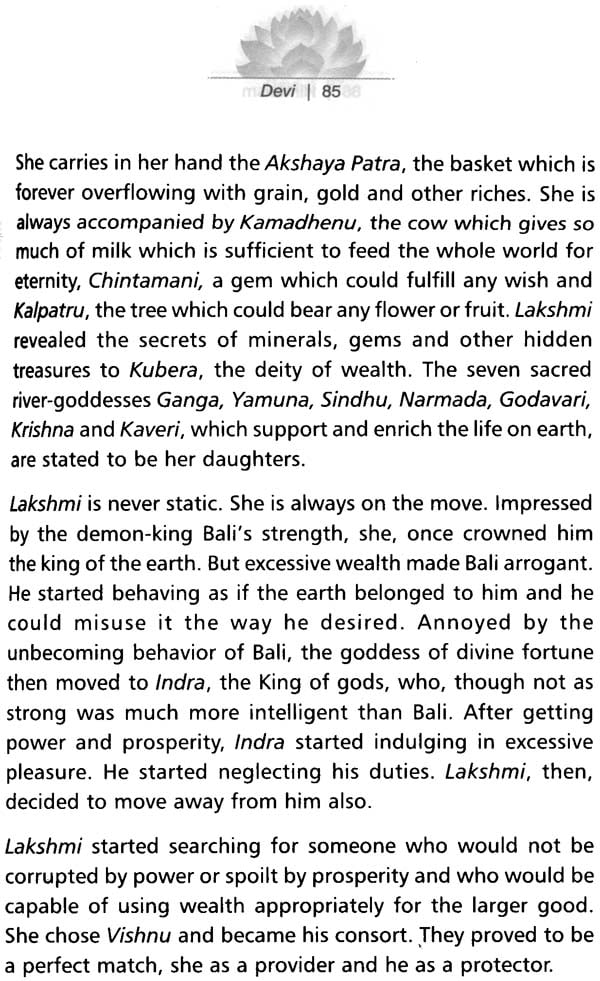 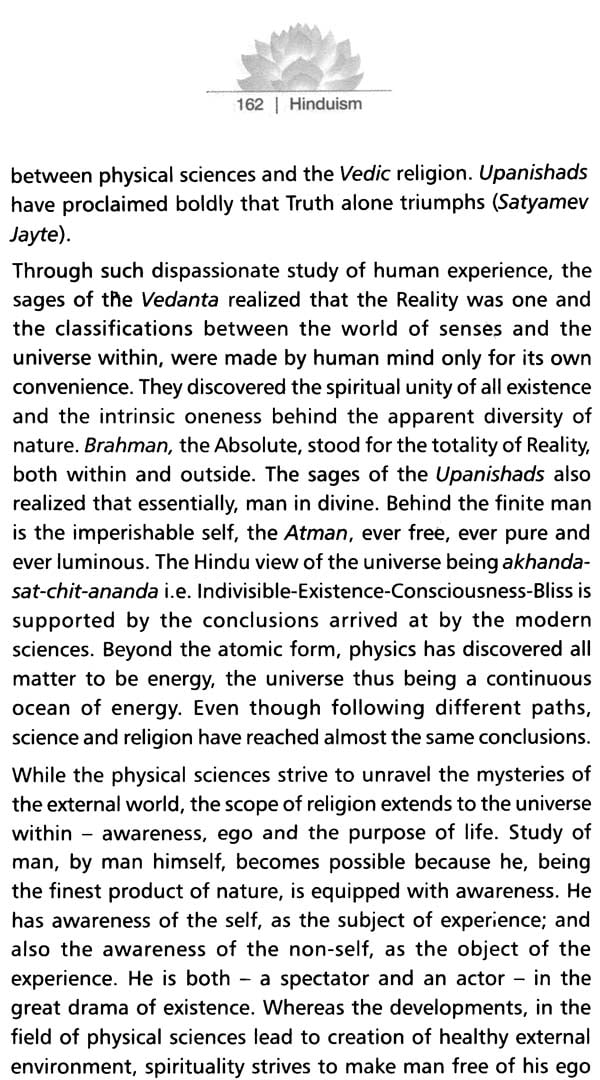 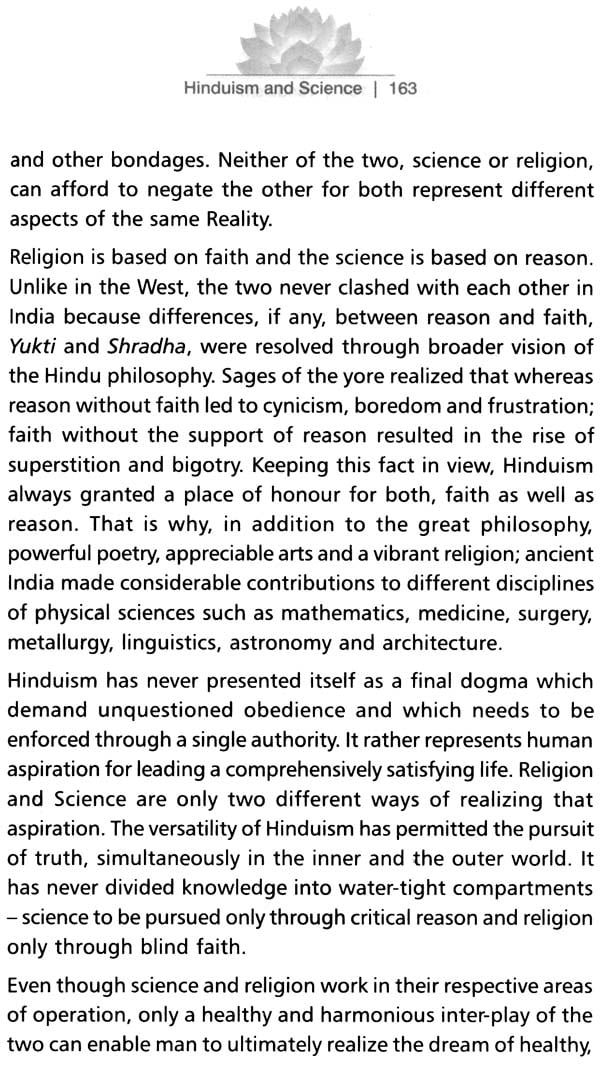 Manifestation of Lord Krishna (Search for Salvation Through A Study of Hinduism and Radhasoami Faith)
By Dr. Vinod Kumar Gupta
$29
FREE Delivery Hinduism For All (An Introduction to the World's Oldest Way of Life)
By Dr. P. Ramachandrasekhar and T.S. Srinivasan
$22
FREE Delivery Some Aspects of The History of Hinduism (A Rare Book)
By R.N.Dandekar
$29
FREE Delivery Paravartan (Back to Hinduism) Why and How
By Raj Eshwar
$11