INDIAN CRICKET: Through The Ages (A Reader) 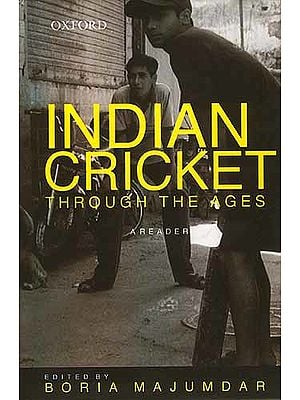 $39.50
Usually ships in 15 days
Notify me when this item is available
Save to Wishlist Send as E-card Share by Email

When Bhuvan compared cricket to gilli danda in Lagaan many laughed. But was indeed referred to as gilli danda in Indian in the late nineteenth century. When, in 1893, the villager of champaner played cricket in their dhotis they presented a very incongruous picture to the contemporary viewer. Even as late as 1931. Indians donned dhotis to assert their national identity when playing against the English. Replete with accounts of such fascinating stories, anecdotes, and information from primary sources. This book is a must read for cricket enthusiasts.

Indian cricket is however, more than the sum of its lore. In contemporary India, it encompasses many dimensions of experience involving politics, gender, religion and class. This Reader sets out to explore the unique bond between cricket and the Indian nation, now more than a century-and -a -half old.

Many interesting facets and anecdotes find place in this volume: original accounts of the evolution of the game in Bengal, Bombay, Karachi and Rajputana as well as in other parts of he subcontinent; the nature of patronage the game has enjoyed over the years; Lala Amarnath's controversial ouster from the team in 1936; the story of cricket commercialization; vernacular writings on the game and much more. It demonstrates that any attempt to understand the nature of social relations and cultural identities in modern Indian must necessarily consider the role and significance of cricket.

This volume is a testimony to the power of cricket-more than any other sport in the country to intoxicate and infuriate to cheer and frustrate, to break hearts and mend fences and to fuel conflict and promote peace.

Invaluable for anyone interested in Indian cricket as well as for academics, cricket enthusiasts, cricket Association, and scholars of social and cultural history.

He is a Rhodes scholar has researched and written extensively on cricket in the subcontinent. He is currently distinguished fellow, La Trobe University, Australia, fellow of the international Olympic Museum, Lausanne and teaches at the Universities of Chicago and Calcutta.