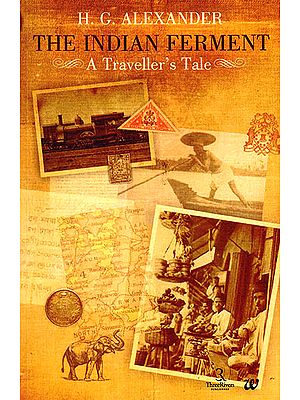 The Indian Ferment: A Traveller's Tale

By turns humorous, sympathetic and hair-raising, this delectable travelogue-cum-memoir s the unique account of a young Englishman travelling through the India of the 1920s for the first time. H.G, Alexander, a young peace- loving Quaker who would go on to become Gandhi’s personal friend, writes of his first impressions of the Indian subcontinent, the flora and fauna, the quaintness of travel arrangements, and always. the wide variety of people he meets — from coolies to young students in the newly-established college, from city lawyers to wealthy Indian landowners, from hard-bitten colonial administrators to gentle men of God — and brings a bygone era to life anew.

Horace Gundy Alexander was born in Croydon. England in 1889 to an eminent lawyer who had worked to suppress the opium trade between India and China. After studying at Cambridge University, he served as secretary in various anti-war committees. During World War I he declined to join the army as a conscientious objector and took up Leaching at a Quaker college instead. An avid traveller, ornithologist and writer. Alexander spent many years in India, where he was instrumental in the peacekeeping efforts around Partition and became a close friend of Mahatma Gandhi. In 1984 he was awarded the Padma Bhushan medal by the Government of India. He died at the age of 100 in Pennsylvania, USA.

India, like the figures of her gods, is a land with many faces. A few are known to the West; many remain unknown. This is a traveller’s sketch-book, nothing more. My journey of exploration led me into strange jungles of racial suspicion and misunderstanding. Without one Indian language I could nor penetrate very far; and yet I believe I learnt enough for the record of my experiences to be worth publishing—though I wrote without intending to publish.

It has been necessary to revise rather freely the letters I wrote; but I have tried to be faithful to the impression of the time. Consequently the reader will find strong judgments written in the heat of particular moments; but, if he will be patient, he may find qualifications later, when I learnt more. I believe it is well to leave the record of these strong impressions—both those critical of Indians and those critical of Europeans. Alone they do not make a true picture; but the picture is not true without them.

No words can express my debt to all, especially to my Indian friends and hosts, who helped in my Eastern education. Many busy men and women turned aside at a moment’s notice to answer questions and to show friendship. I do not know that I have ever met such openness to an English traveller as I found everywhere in India; and this is the more remarkable as this confidence has lately been abused.

All those friends I thank; one I mention by name, Tarini Prasad Sinha. To him, and to the friendship of his country and mine, I dedicate this book.

After reading carefully again and again this writing of Horace Alexander’s, I felt very strongly, indeed, that it ought to be published, because it has given with remarkably keen observation a description of the ferment of thought in India and the racial feeling aroused.

It is supremely necessary to appreciate this Indian ferment in England at once, in order that a great calamity may be avoided. For unless especially the younger generation in England, which should naturally sympathize with Young India in its present revolutionary mood, can understand what is taking place, there may be perpetrated once more in our own times one of those ghastly tragedies of human history not altogether dissimilar from that which took place in Ireland just after the War.

For the one question that perplexes the soul of Young India to-day is not at all whether freedom is immediately to be achieved or not. Already that has been decided in the affirmative by every Indian who has thought over the matter. The burning question to-day is this: whether freedom is to be obtained by violent means or by non-violent means. Even the much less important question, as to whether this freedom should involve complete separation from England, or the maintenance of some such loose connection as the Dutch and British in South Africa still retain, will depend for its own answer almost entirely on the solution of this larger problem about violence; because it follows in direct moral sequence that if the Indian Revolution, which has now actually begun, becomes wholly violent in character, it will engender on both sides a racial hatred that must finally lead to a severance from England both outward and inward. For in that case there will arise complete antipathy of spirit, which is infinitely more serious than any outward severance of political relations.

My own attitude from first to last has been this: On the one hand, I have again and again declared that “independence” and “freedom” are synonymous terms, in their moral connotation, and that no true Englishman could ever wish to keep another people in bondage. On the other hand, I have also learned wholeheartedly to detest the murderous violence which is quite inextricably involved in modern war. It has come to me, as a life experience, and not as a mere dogma, that evil can never be overcome by evil, but only by good. It need hardly be said, in England, that this is nothing except Christ’s own teaching. It need also hardly be told, in India, that this is nothing except the teaching of the Buddha .Yet so little is this teaching followed in both countries in modern times that, in season and out of season, in India and Europe alike, this and this alone at the present juncture has become the one doctrine that I have felt it necessary at all costs to uphold. Indeed, I have been prepared at any moment to suffer for its truth, and have already done so.

It has been necessary for me thus to define my own position, while writing this Introduction, because there is no possibility for anyone who loves India to remain neutral to-day when these vital political questions are raised. For the time being, the foreign issue with regard to England and Swaraj is the most acute of all; but it carries with it an internal reformation in the wake of the political ferment. The hopefulness of the present situation is this: that as long as the present ferment continues to excite the masses of the people, who were sluggish and stagnant before, social changes of very far-reaching importance are bound to follow in order to correspond with the new political ideas. This has been witnessed to-day in its unrestricted form in Modern Turkey, but in a far more restricted way it is evident in India also.

The gravest of all dangers for the Administration at such a crisis is timidity. While it would be absurd to charge the eminent British statesmen who are still at the head of Indian affairs (for actual self-government in India has gone only a very little way forward) with a desire for reaction in social reform in India, yet the charge of timidity is by no means so lightly brushed aside; for there is a profound ignorance in these matters in London, as each Indian debate in both Houses of Parliament painfully reveals. Such ignorance leads to uncertainty of handling. This was acutely evident in the Bill proposed at Delhi last year for a reform, long overdue, dealing drastically with child marriage. Here the officials at Delhi, with the approval of the India Office in Whitehall, took the side of delay and caution—not from any lack of sympathy with Indian social reform, but through timidity as to the consequences involved. An abuse which Modern Turkey would have swept away in a single session is still allowed to linger on and fester.

It may very reasonably be argued that in a vast heterogeneous country such as India it is safer to err on the side of caution. To this I would answer that there are times when sitting on the safety-valve is not the best way of preventing the steam-boiler from bursting.

It is because Horace Alexander has realized so vividly the urgency of political reform in India, and along with this the need for the removal of the present racial and colour prejudices, which involve cruel insult and injustice that I feel his vivid observations to be of special value at the present juncture. In one respect only it is embarrassing for me to write at his request, because I am frequently mentioned by him as an intimate, personal friend, and his praise is as generous as his friendship; but the extreme urgency of the matter makes diffidence on that account out of place. Things in India are much too critical for personal considerations to intervene.

After the amazing propaganda in the West of Miss Mayo’s book, Mother India, and the bitterness which ensued, not only Mahatma Gandhi and the poet Rabindranath Tagore, but also Muhammadan and Sikh leaders in India, impressed upon me the necessity of going forward with all possible speed to Europe and America, in order to endeavour to create a better racial understanding. It is in this direct connection, and in order to fulfil their wishes that I have ventured to press so strongly for Horace Alexander’s manuscript to be published. There are impressions in it that would not correspond with my own opinions but the freshness of observation is remarkable and the perspective that the author has gained vividly represents in outline the picture of Indian in ferment to day. 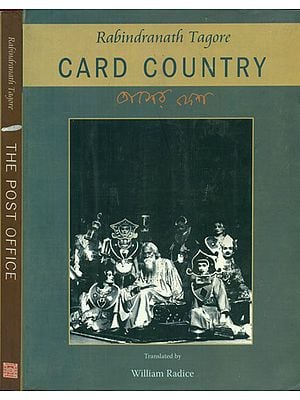