To depict Indian music as illustrative of the mind of the ancient Hindus of Puranic, Buddhistic, Sutra & Brahmanaa or Upanishadic periods, as well as of the Indian Muslims of a few centuries in the past, is the task which the present book takes up. The nomenclature used in this book is not pure Sanskrit, but the one in common use among the present musicians. The book is divided into eight chapters. Chapter one is on the History of Indian Music and the Theory of Music in general; Chapter two deals with the Theory and practice of Musical Sounds; Chapter three gives details about the Ragas and their formations; Chapter four deals with the Talas and their formations; Chapter fifth is about the Practical Hints on Indian Music ; Chapter six is on a short history of the Musical scale; Chapter seven gives an account of Dancing. The last chapter is an overall summary of the present state of Indian music. A detailed index of the words and three charts on the Ragas have been included in the book for ready reference to the reader.

The present work neither pretends to give, nor aims at giving, a complete description of Indian music or demonstration of the phenomena of Sound or of the history and laws of Music. Those who wish to study these subjects thoroughly, whether from their scientific or artistic aspect, must have recourse to special works and special study.

To show briefly the broad outlines of Indian Music as an art, and to test them by the light of Western science, has been the aim and scope of this work, which, it is hoped, will be of some interest to the Public.

If there be anything-in this work acceptable to the general reader, it is exclusively due to my drawing on the writings on the Phenomena of Sound by Herbert Spencer, Charles Darwin, and a few other English authors, which I have been studying for some time If there be anything in it interesting or instructive to the admirer of music, it is wholly due to the charms of Indian music.

My best acknowledgments are due to those who have not only cared to make me more or less happy according to their means, but have liberally allowed me to prosecute my study without taking any compensating work from me, and I, therefore, take this opportunity of publicly expressing my sense of gratefulness to Sheikhs6.heb Shri Husenmiiigheb, Chief of Mangrol ; His Highness Sir Vakhatsingjisiheb, Riljiistiheb of Lunawada ; Kumla. Shri Harbhamji-stiheb of Morvi, M.A., LL.M. (Cantab.), Barrister-at-Law ; His Highness Basingjistilieb, Thtikorsethela of Wadhwan ; and KIniushri S6matkIninjisitheb, Chief of Gidad.

I cannot close this preface without an expression of thanks to my friends Dr. Narotamdtls Indraji Vishnav, B.S. (Durham), Mr. Anantrai NtinalCd Bach, B.A., LL.B. (Bombay), and Mr. Kalianrai Jetlati Bakshi of Rajkot, for having helped me in the tedious task of going through the proofs of this work.

The nomenclature used throughout this work is not pure Sanskrit, but is the popular one among Indian musicians, and, therefore, no strict rule of spelling is observed. 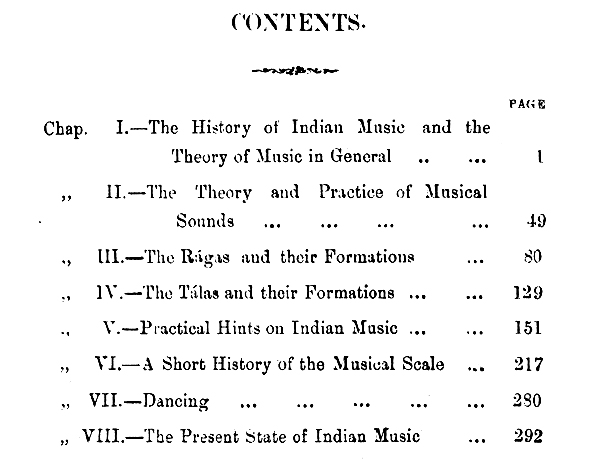 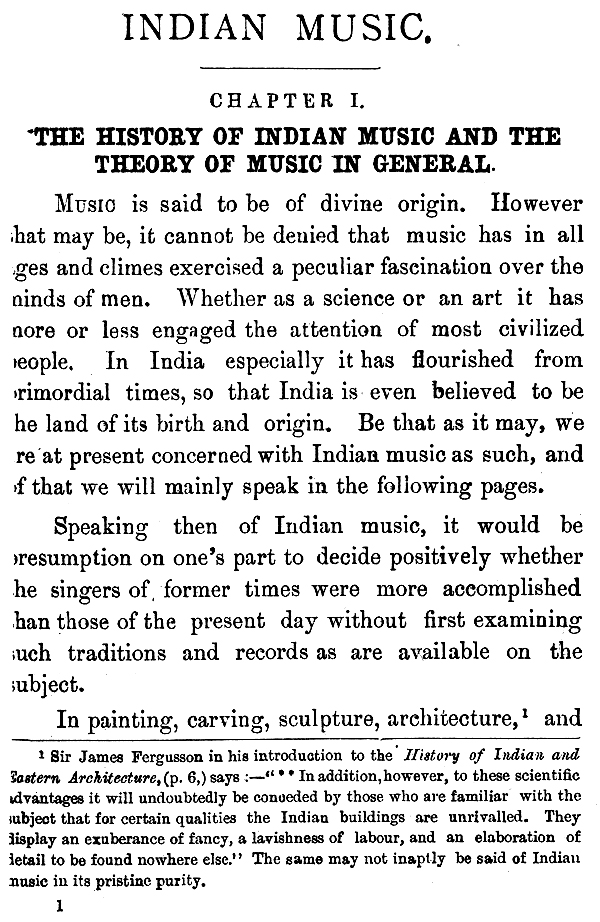 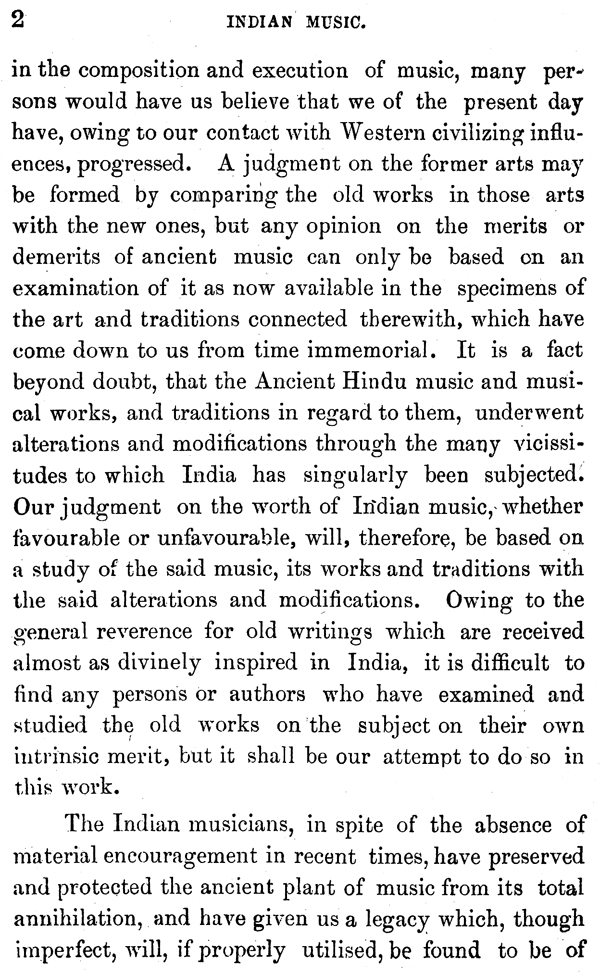 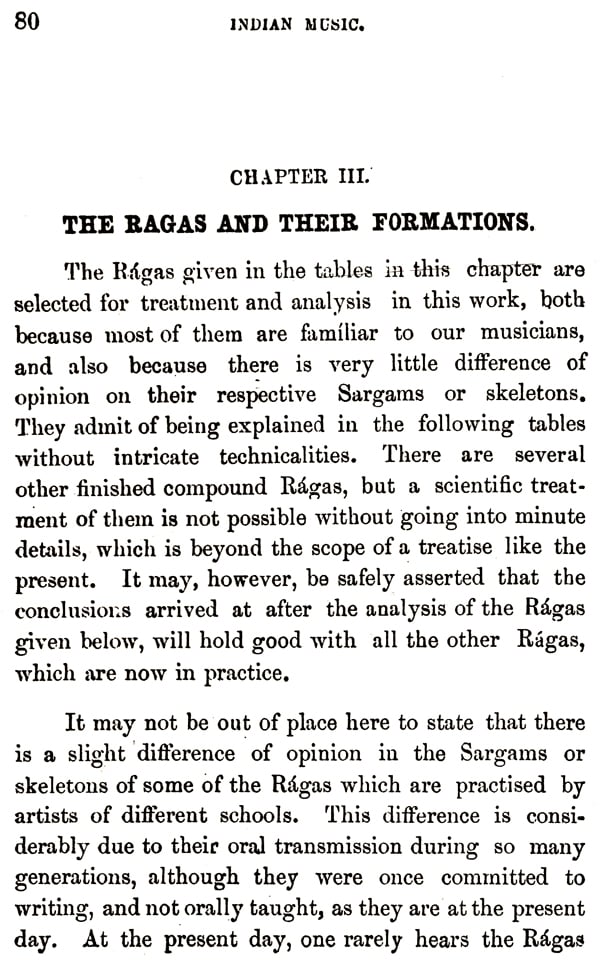 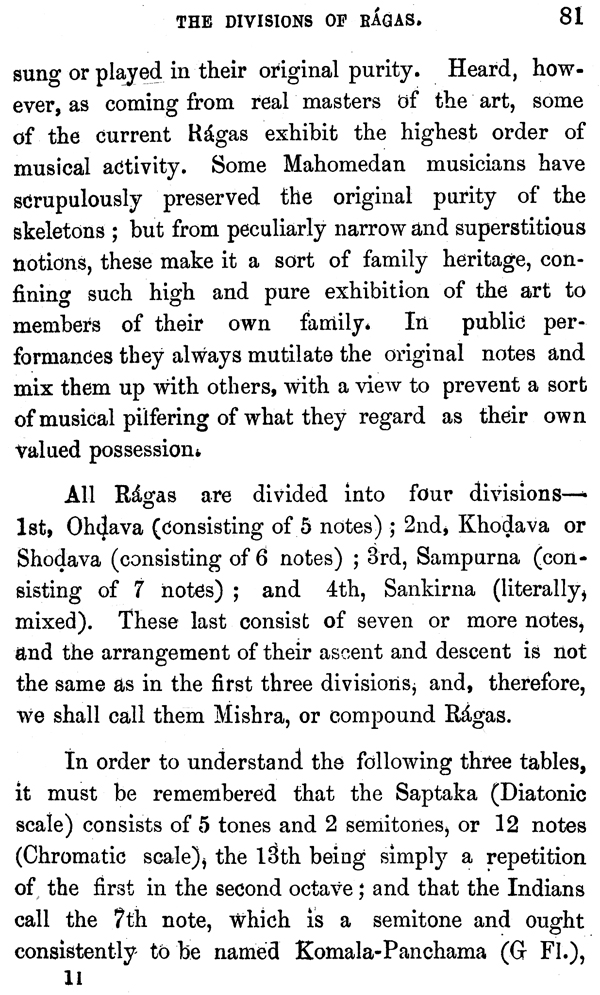 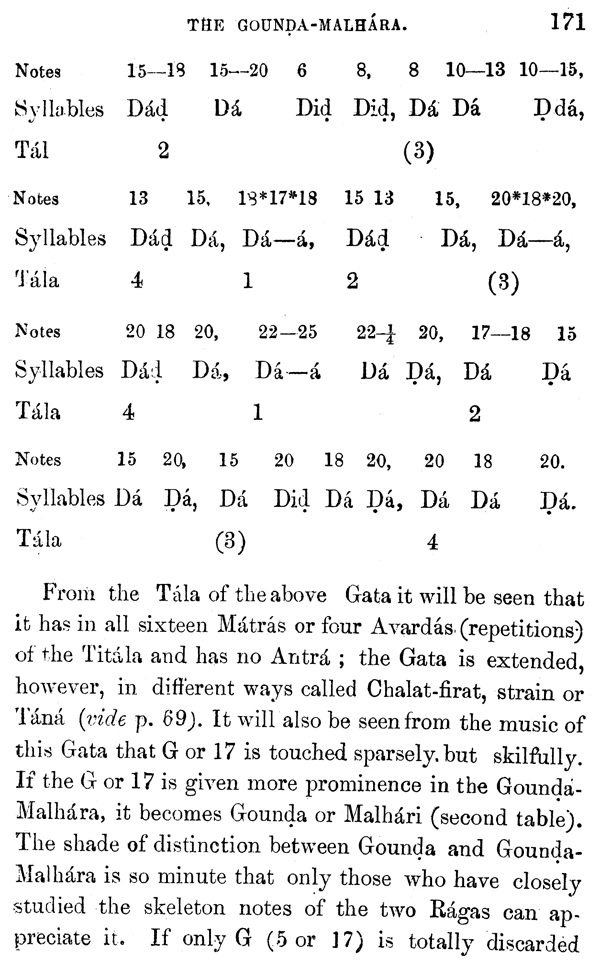 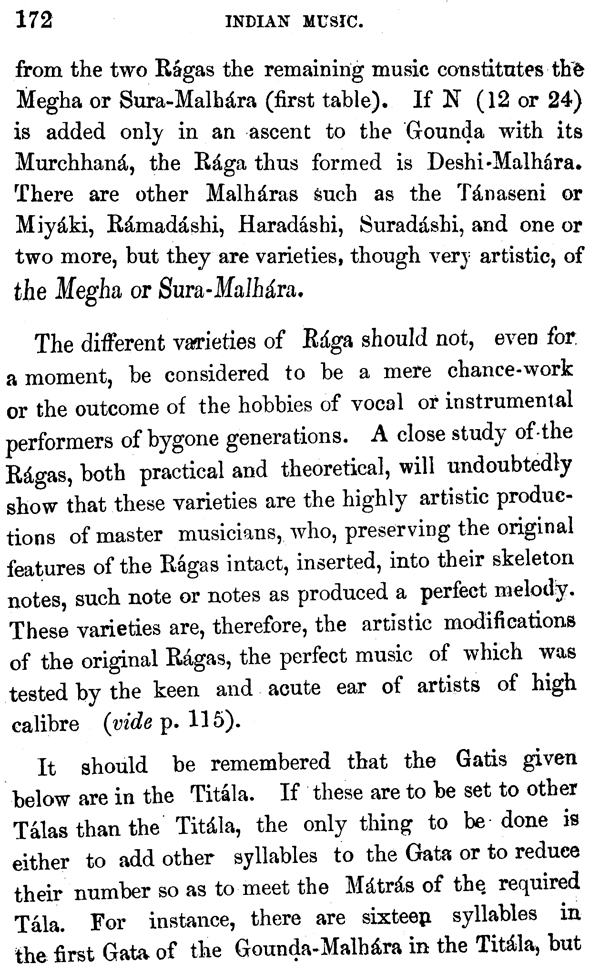 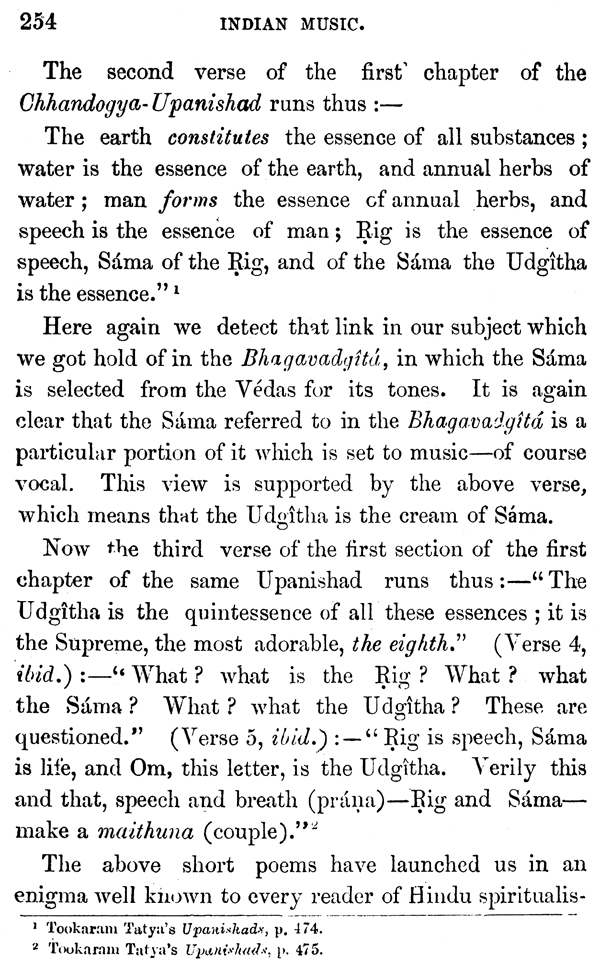 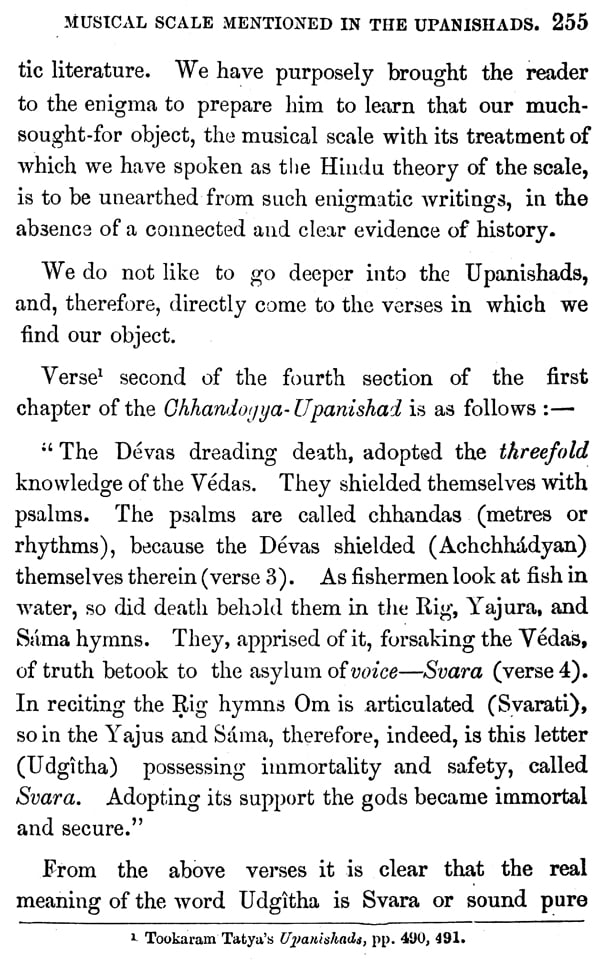 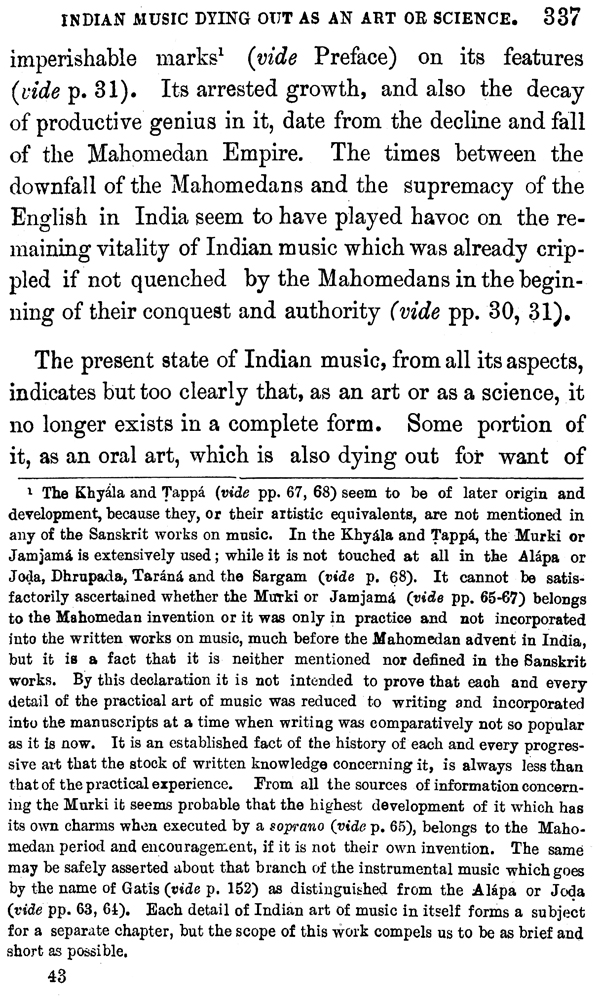 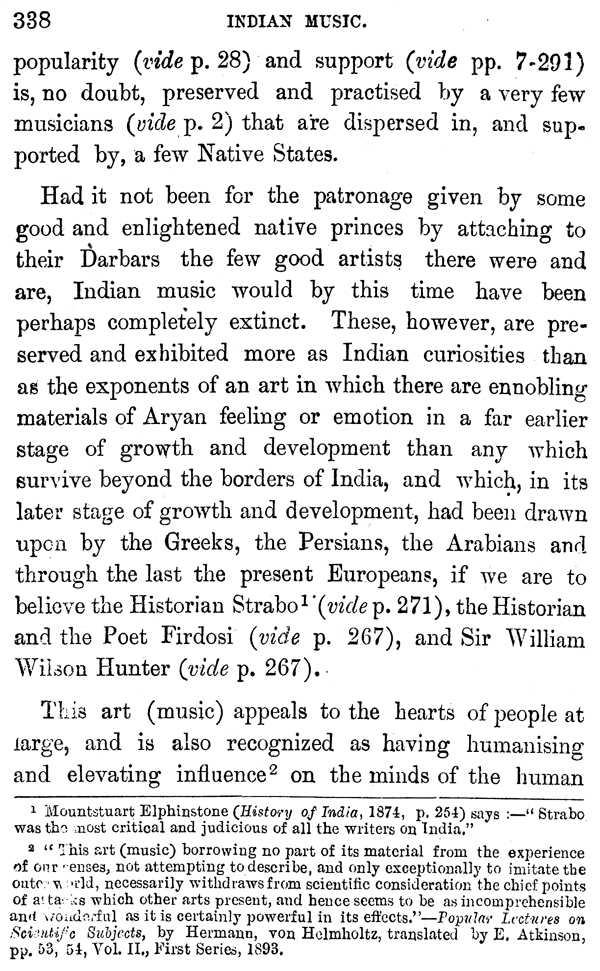 Elements of Western Music for Students of Indian Music (With Notation)
By Prof. P. Sambamoorthy
$11 Time Measure and Compositional Types In Indian Music: A Historical and Analytical Study of Tala, Chanda and Nibaddha Musical Forms
By Subhadra Chaudhary, Translated into English by Hema Ramanathan
$37.50
Out of Stock