Inside An Elusive Mind: Prabhakaran 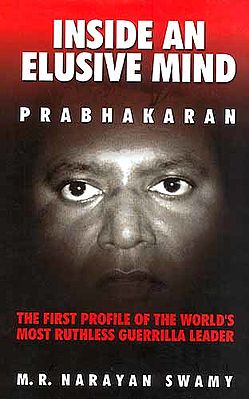 $30.00
Notify me when this item is available
Save to Wishlist Send as E-card Share by Email
From the Jacket:

Twenty years after he took measured steps into the world of violent sub-nationalism, Velupillai Prabhakaran of Sri Lanka has become of the world's most ruthless separatist leaders. not even 50 yet, he is unrivaled in his sinister influence over a nation's fate. since 1983 he has lorded over a secessionist movement that has lead to at least a dozen cold-blooded political assassinations, several internecine murders, ten of suicide bombings and over 60,000 deaths even as it has created perhaps the world's most well-oiled fighting apparatus that would qualify as a de facto military anywhere.

Prabhakaran's fiercely loyal outfit Liberation Tigers of Tamil Eelam, or LTTE, has been fighting to carve a separate Tamil nation out of the tropical Indian Ocean island nation of Sri Lanka. The LTTE has been designated a terrorist organization or put on the terror list in countries ranging from the United States to India. Prabhakaran himself is one of the most wanted men in the world.

M.R. Narayan Swamy has been a jounalist for 25 years. he began his career in 1978 with the UNI, one of India's two mainline news agencies, and later joined the AFP, the international French-English news agency. He currently works with the Indo-Asian News Service in New Delhi. Narayan Swamy has been a veteran observer of Sri Lanka since the inception of the insurgency in 1983 and has closely followed Prabhakaran's career. His first book, Tigers of Lanka, was widely acclaimed for the meticulous account for the meticulous account of the separatist movement in Sri Lanka.

this book is a result of over one hundred interviews in India, Sri Lanka, Europe and North America over a period of two years.

Riveting portrait of the man who leads the world's most motivated guerrillas - a gripping read.

The definitive study of a guerrilla leader who has baffled the world with his daredevil exploits and sheer cunning.