Three hundred years ago. Swami Prannath realised the futility of people fighting in the name of religion. He proclaimed that all the religions were basically pointing towards the same ultimate reality.

We can him by different names and fight amongst ourselves, not understanding the common theme underlying them. Please understand that Lord of all is one and one alone.

All the scriptures-Koran, Tauret, Jabbor, bible, have been explained. The mysteries of the Vedanta, Gita and Bhagawat have been solved. Their light can be seen by everyone. That is why all of God’s heavenly souls are celebrating. They are welcoming the arrival of the New Age. The Kalki Avtar, predicted in the Bhagwat, is none other than the Imam Mehdi, the saviour.

Wise souls who know this, will understand all this. They will be able to read all the scriptures and enjoy them. They will find the message of the Lord in all of them. Such is the grandeur of Imam Mehdi, the Kalki, who has already arrived in the form of Mahamati Prannath. Let us all recognize him and present his message to the world.

“Your prayer with a pure heart reaches the Lord. The Lord took me to such heights that I reached his Abode.”

“The Lord creates the desire in us and then fulfills its. Why this ago full of doubts becomes culprit in blocking the path of your grace.”

“Ego is the only curtain between you and the Lord. There is nothing besides this which seperates the two. When it is removed, one enjoys the eternal happiness of Abode in this life.”

“When the prayer is attended with a pure mind; it is bound to reach the Lord. The Lord has placed me in such a position from where my heart can reach the eternal abode.”

The present book 'Khilvat' meaning 'Dialogue in Solitude' is one of the fourteen books of Mahamati Prannath's Kuljam Swaroop which has more than eighteen thousand verses. The present book contains sixteen chapters and one thousand seventy four verses. This book is an intimate one-sided conversation of the soul with the Lord. They left their original Abode and came in this universe to see and feel the pleasures and pains of this transitory world.

The soul (Indravati, Mahamati Prannath) curses the moment when she sought to see this miserable world and now she feels sorry for that. The soul says that I have no right to complain but now all the divine souls long to go back to their original 'Sat-chit-anand' state in 'Paramdham'.

This book-Khilvat explains these feelings in highly descriptive and emotional manner which touches the core of the heart. The readers. I am sure, will enjoy the book and be one with 'her' in her dialogue in solitude.

Maharnati's Kuljam Swaroop, like other great treatises of the great saints, asserts that there is one 'Lord Supreme' who, with this 'sat' orexisting nature called 'Akshar', dreams of many perishable universes. His supreme parmour 'Shyama' with her divine souls always plans new games of pleasure and happiness. That is why she is called 'Anand' or bliss. They are enjoying that blissful state. The Lord wanted them to enjoy the bliss after seeing the sorrows in the world. Thus He created a desire in them, to ask for it.

In this momentry sorrowful experience the souls do not like the separation of their beloved Lord; resulting in this great wailing and soul's plea in praying to the master to call them back.

The religions are supposed to unite people and enhance their love for the Lord, but instead they are fighting for the supremacy of 'their God' and their books. Mahamati in his effort has tried to unite them and enjoy' all the messages of the Lord' in different languages according to their respective approach. This treaties can form a basis for One World Religion if studied with unbiased mind and bring peace in this otherwise divided world.

It is difficult to translate any book, from one to another language. but Dr. Raj Kumar Arora's work is commendable. All my prayers and blessings on him for his endevour.

The Khilvat is the eighth book of the 'Shri Tartam Sagar', (The Kuljam Swaroop); the ocean of spiritual knowledge, revealed to Swami Prannath. This sacred scripture is known as the Tartam Sagar because it discusses the prevalent dogmas, cults, creeds, beliefs and doctrines not only separately but also collectively. Khilvat means a 'meeting in solitude', meeting in seclusion between the soul and the Supreme Lord. The book which records this conversation is known by this name. It is in simple Hindi and was probably revealed during Samvat 1740-1748; (around 1692 AD). It contains 16 sections and 1074 verses.

The first section deals with the prayer. The para souls incarnated here to witness the play of this transient world. They became forgetful of their own real self in this illusory drama, and, therefore, are experiencing the miseries of this world. This spiritual wisdom awakened them and they came to know that they themselves had asked the Lord for this worldly play. Now there is no scope for any complaint to Him; but still they made a request to the Lord about their problem. Mahamati listened to their prayer/ and asked them to dissolve their ego; the sense of 'I' which is the only hinderance to their going back to the Supreme Lord. In other five sections the mysteries of the Abode, the supreme souls and the lord along with their relationship have been discussed. The divine dialogue between the Lord and these souls, the majesty of the Lord, sending of the guru for awakening the souls, the secrets of the supreme Abode and compassion of the Lord for the souls are some other topics discussed in this book. All this has been explained through the medium of a dialogue. When we read this book with a devotion, we experience as if we ourselves are in conversation with the Lord.

The Khilvat 'Dialogue in Solitude' is an important contribution in the spiritual stream of the medieval Indian devotional literature. Dialogue of the common man is known as a conversation between two individuals. It is different from a debate where the parties discuss, argue and refute each other's point of view. The topic is discussed 'for' and 'against'. The dialogue in the Khilvat is between the soul and the Supreme Lord and is quite different from ordinary conversation, which comes in the realm of our thinking. No doubt, in the Republic of Plato, the pupil asks question and the preceptor answers his queries, but invariably all worldly things are discussed. Like wise in the dialogues of J. Krishnamoorty, the thought process and the question answer series leads to the deconditioning of mind and thus comes to complete rest. The Bhagvat Gita is a dialogue of philosophical nature where Arjun explains his doubts and Krishna removes them and in the ultimate, he prepares him to fight. In these cases the preceptor and the pupil are physically present. Their language is worldly and can be easily heard and understood. The whole process remains within the domain of this existing world.

But the dialogue, in the case of Khilvat, is different from the above dialogues. Here there is the individual soul and the Lord and their communion is this dialogue. The mind and the world are totally left behind. The soul is benefit of worldly fetter and it is calm and collected, pure and pious, sober and serene and is in its own original form. Both are face to face and talk without any language. This is like the unspoken language of love between the husband and wife. It is the intense feeling of joy and rapport between you and Him, and after a while you are dissolved in Him or the me overflows in "you", he drops in its unlimited being. In the ordinary language of the devotional cult it is called the divine marriage and both are in warm embrace and the bride (soul) goes to the home (celestial home) of the bride groom and enjoys eternal bliss. Their training is framed by science. They depend on logical, analytical, and rational approach, and also for good reasons. They have discovered the mysteries of nature and made improvement in several fields. In this scenario they are left spiritually starved and out of balance. The man of science and mind goes without while the devotee of spiritualities goes within and under the deep and hidden treasures of this innate nature.

In the Khilvat, this going within is called to live and have one’s being in the solitude. This word solitude is of deep significance for those who follow and practice the science of spirituality. Ordinarily, solitude means being alone, lonely, separate, secluded or remote from society. But in the Khilvat it is not used in the physical or social sense. In the spiritual sense it means total stillness of the mind where any vibrations of the world or of thinking process come to stand still. In that state, the flow of thoughts ceases and there is utter silence within. The pollution of the loud noises of the mind is cleaned and it is ready to regain its original supreme form. To be precise, it is a state where there is no mind and the soul experiences its original form and gets ready to have a dialogue with the Supreme Lord which is the main subject matter of the Khilvat. This dialogue opens the kingdom of spiritual universe and the soul is totally in perfect union with Him. This experience is described by Plato, the Greek mystic in these words, "The soul neither sees, nor distinguishes by seeing, nor imagines that these are thus things; but becomes as it were another thing, ceases to be itself and to belong to itself. It belongs to God and is one with Him, like two concentric circles: concurring they are one but when separate, they are two".

Solitude does not mean that the mind is empty and vacant, but it is totally devoid of worldly images, cravings and the sense of '1' or "me". In its place, the deep longing to meet the Lord and the intense degree of divine love begins to flow in every pore of the being of the devotee. According to the Khilvat, solitude is not a vaccum, but a heart over flowing with His love and the setting of the soul for a divine dialogue. This means that the whole world is our and the strong current of love is in the soul. This phenomenon of 'out' and 'in' is the required condition and connectivity to have and enjoy the spiritual conversation which has been lovingly explained in this text. Thus the love affair of the soul with wordly things is replaced by the love for the Lord. 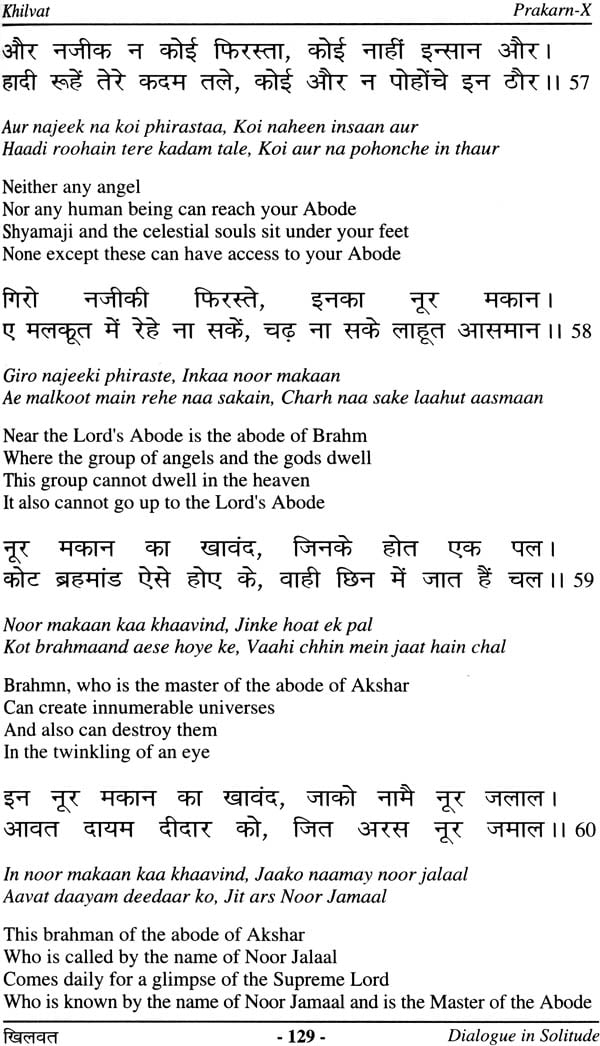 The Search Within Based on Mahamati Prannath's Tartam Vani
By Dr. Anil Mehta
$22
FREE Delivery