A Lover's Guide To Warangal: The Kridabhiramamu 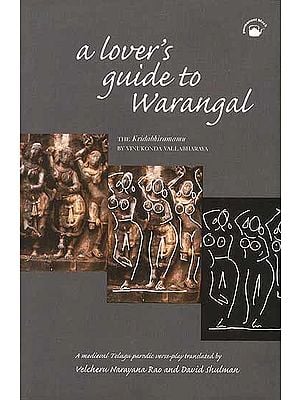 $29.00
Notify me when this item is available
Save to Wishlist Send as E-card Share by Email
From The Jacket

The Kridabhiramamu of Vinukonda Vallabharaya unique place in the history of South Indian literature. Composed as a one-act play in Telugu verse in the early fifteenth century, it offers a parodic vision of the Kakatiya capital of Warangal as reimagined by a poet living far to the south, in Mopuru, some hundred years after the destruction of the Kakatiya city by the Tughluks.

The poet unfolds a remarkably realistic and highly eroticized panorama of life in the alleys and streets of Warangal as the hero of his text, Govinda Mancana Sarma, moves through the city in search of his former lover. A series of rich lyrical vignettes brings to life images of basket-weavers, peasants, seductive whores and madams, pole-dancers, snake-charmers, folk singers, cock-fights, ra-gights, dice games, and other component of a social universe usually not documented in medieval Indian texts. At the same time, this parodic reality is radically transformed in highly unusual ways.

The translators' introduction analyses this transformation and suggests an interpretation of the text that links it to notions of carnival and ritual inversion, while insisting on the distinctiveness and radical nature of the process embodied here. A new-theory of carnival transformations is set forth, partly in relation to the medieval Sanskrit genre of bhana, which offers somewhat similar, though less far-reaching, effects.

Since the rediscovery of the Kridabhiramamu at the beginning of the twentieth century, the book has been the subject of intense controversy among Telugu scholars and critics, some of whom attacked it as obscene. The translators discuss this controversy and suggest a new way of closely reading the text in the light of the vibrant literary milieu in which it was composed.

An afterword by Phillip B. Wagoner situates the imagined Warangal of Valabharaya in relation to the archaeologically documented Kakatiya city and its major shrines and finds, and in the historical context of fourteenth and fifteenth-century Andhra.

Velcheru Narayana Rao is Krishnadevaraya Professor of Languages and Cultures of Asia at the University of Wisconsin, Madison. He is the author of a number of works on Telugu literature.

David Shulman is Professor of Indian Studies and Comparative Religion at the Hebrew University, Jerusalem, Israel. He is the author of several works on Tamil, Telugu, and Sanskrit Literature and poetics, and on the history of religion in South India.

Together, Narayana Rao and Shulman have published several translations of Telugu literary texts. Their most recent publication (with Sanjay Subrahmanyam) is textures of Time: Writing History in Sough India 1600-1800, also published by Permanent Black.