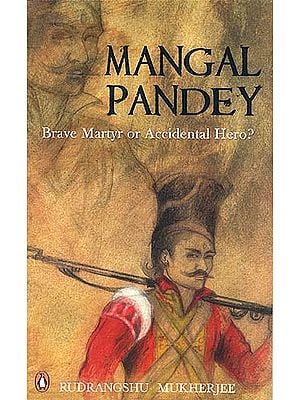 $12.00
Notify me when this item is available
Save to Wishlist Send as E-card Share by Email
From the Jacket:

'Come out! Get ready! It's for our religion! From biting these cartridge we shall become infidels!'

On a sleepy Sunday afternoon in March 1857, an agitated sepoy in the English East India Company's 34th Native Infantry marched on to the parade ground in Barrackpore, exhorting his comrades to join him in protecting their religion from the Europeans. When British officers arrived to arrest him, he drew his sword on them and then turned his musket on himself. As he was led off to the gallows a few days later, Mangal Pandey passed into history and legend as the man who single-handedly started the 1857 Rising.

But who was the real Mangal Pandey? A dashing, heroic figure, as portrayed by Aamir Khan in the film The Rising? A fiery patriot who embarked on a suicidal mission to defend his country's honour? Or just an ordinary sepoy who, in a state of intoxication, committed a foolhardy act for which he was hanged?

Lively, thought-provoking as well as scholarly, Rudrangshu Mukherjee's analysis of this episode in Indian history presents a vivid picture of life in the barracks of the East India Company's cantonments in 1857, describes the social customs and military regulations that governed the daily routines of Mangal Pandey and other Indian sepoys, and examines the controversies and unrest that foreshadowed the 1857 Rising.

Uncovering the hard facts behind the myths and conjectures of popular belief, nationalist rhetoric and cinematic imagination, this book provides, for the first time, a credible portrait of Mangal Pandey as he really was.

Rudrangshu Mukherjee was educated at Presidency College, Kolkata, Jawaharlal Nehru University, New Delhi, and St. Edmund Hall, Oxford. He was awarded a D.Phill in Modern History by the University of Oxford in 1981. he has taught History at the University of Calcutta and held visiting appointments at Princeton University, the University of Manchester and the University of California, Santa Cruz. He is author of Awadh in Revolt 1857-58: A Study of Popular Resistance (Delhi, 1984, repr. 2002) and Spectre of Violence: The 1857 Kanpur Massacres (Delhi, 1998). He has also edited The Penguin Gandhi Reader (Delhi, 1993) and the Art of Bengal: A Vision Defined, 1955-75 (Kolkata, 2003). He is the co-editor of Trade and Politics and the Indian Ocean World: Essays in Honour of Ashin Das Gupta (Delhi, 1998). He is now editor, editorial pages, The Telegraph.