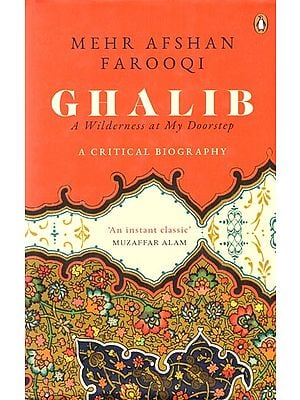 Mirza Asadullah Khan Ghalib was born in Agra in the closing years of the eighteenth century. A precocious child, he began composing verses at an early age and gained recognition while he was still very young. He wrote in both Urdu and Persian and was also a great prose stylist. He was a careful, even strict, editor of his work who took to publishing long before his peers. His predilection for writing difficult, obscure poetry peppered with complex metaphors produced a unique commentarial tradition that did not extend beyond his work. Commentaries on his current Urdu divan have produced a field of critical writing that eventually lead to the crafting of a critical lens with which to view the classical ghazal.

The nineteenth century was the height of European colonialism. British colonialism in India produced definitive changes in the ways literature was produced, circulated and consumed. Ghalib responded to the cultural challenge with a far-sightedness that was commendable. His imagination sought engagement with a wider community of readers. His deliberate switch to composing in Persian shows that he wanted his works to reach beyond political boundaries and linguistic barriers.

Ghalib's poetic trajectory begins from Urdu, then moves to composing almost entirely in Persian and finally swings back to Urdu. It is nearly as complex as his poetry. However, his poetic output in Persian s far more than what he wrote in Urdu. More important is that he gave precedence to Persian over Urdu. Ghalib's voice presents us with a double bind, linguistic paradox. Exploring his life, works and philosophy, this authoritative critical biography of halib opens a window to many shades of India and the subcontinent's cultural and literary traditions.

MEHR AFSHAN FAROO grew up in Allahabad, India. A multiple-gold medalist from Allahabad University, Farooqi is currently associate professor of Urdu and South Asian literature at the University of Virginia. Her research publications address complex issues of Urdu literary culture, particularly in the context of modernity. She is interested in bilingualism and how it impacts creativity. A well-known translator, anthologist and columnist, she is also the editor of the pioneering two-volume work The Oxford India Anthology of Modern Urdu Literature (Oxford University Press, zoo8). More recently, she has published the acclaimed monograph The Postcolonial Mind: Urdu Culture, Islam, and Modernity in Muhammad Hasan Askari (Palgrave and Oxford University Press, 2,013). Farooqi also writes a featured column on Urdu literature of the past and present in the Dawn.

If a taste for poetry was the law of the land, My poems would have fame like the Pleiades; And Ghalib, if this art of poetry was a religion-This book of poems would be its Revealed Book.

Mirza Asadullah Khan Ghalib was born in Agra in the closing years of the eighteenth century. A precocious child, he began composing verses at the age of nine (or maybe even earlier) and had a divan (a collection of poems organized alphabetically) of Urdu poetry before he was twenty. At that time, he wrote mostly in Urdu and a little in Persian. Later, he devoted more attention to Persian. Ghalib's deliberate switch to composing in Persian during a long and important period in his life (from about 1825 to 1860) might suggest that he wanted his work to go beyond political boundaries and linguistic barriers.

He was a great letter writer, too. In the early years, his letters were written in Persian; later in life he switched to Urdu and became known as a major stylist of Urdu prose. Ghalib was a careful, even strict, editor of his work. He realized the advantages of print technology and published his poetry long before his peers. 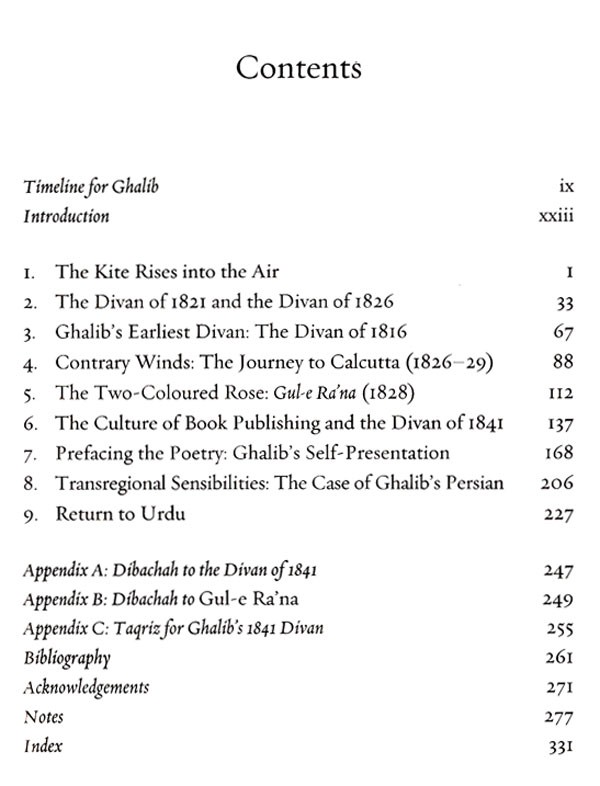 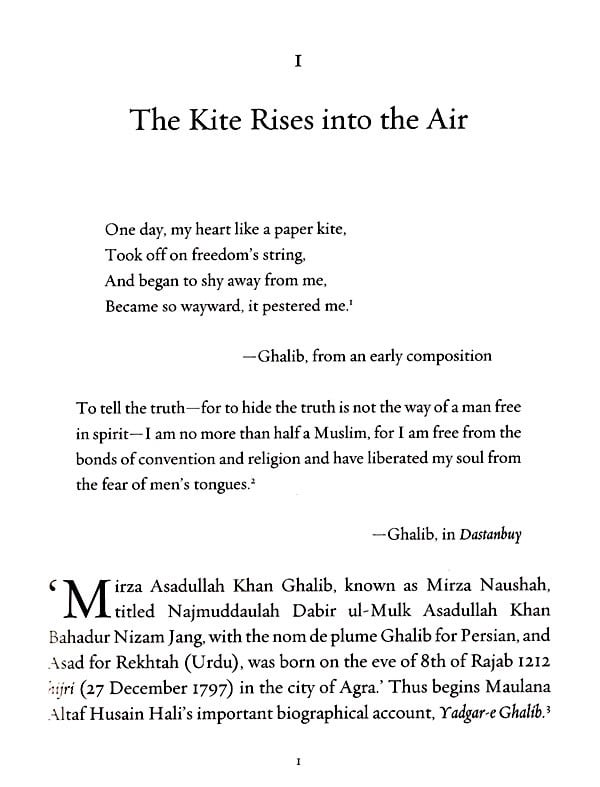 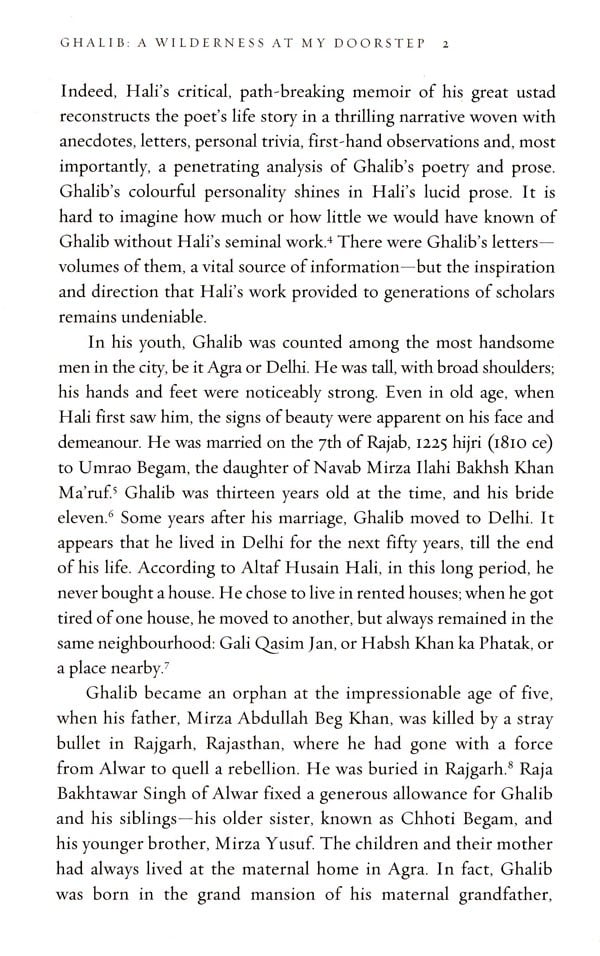 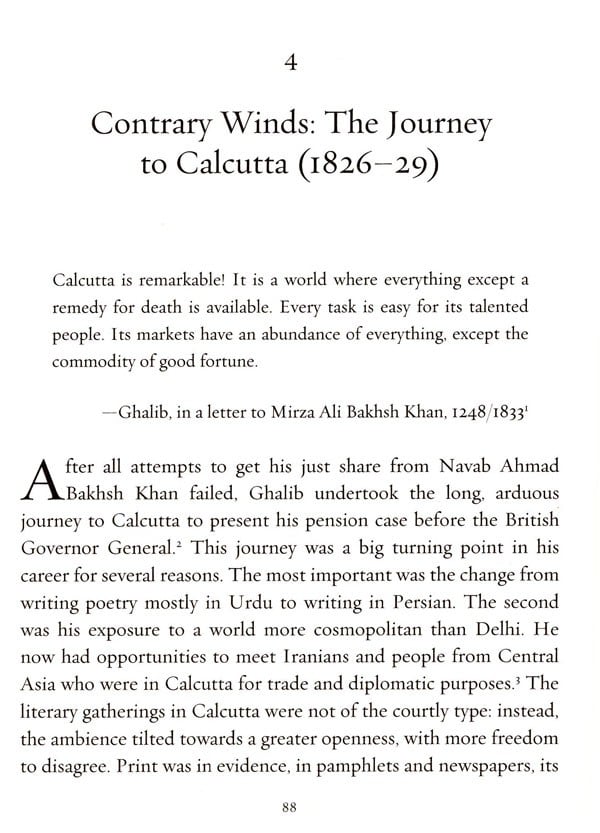 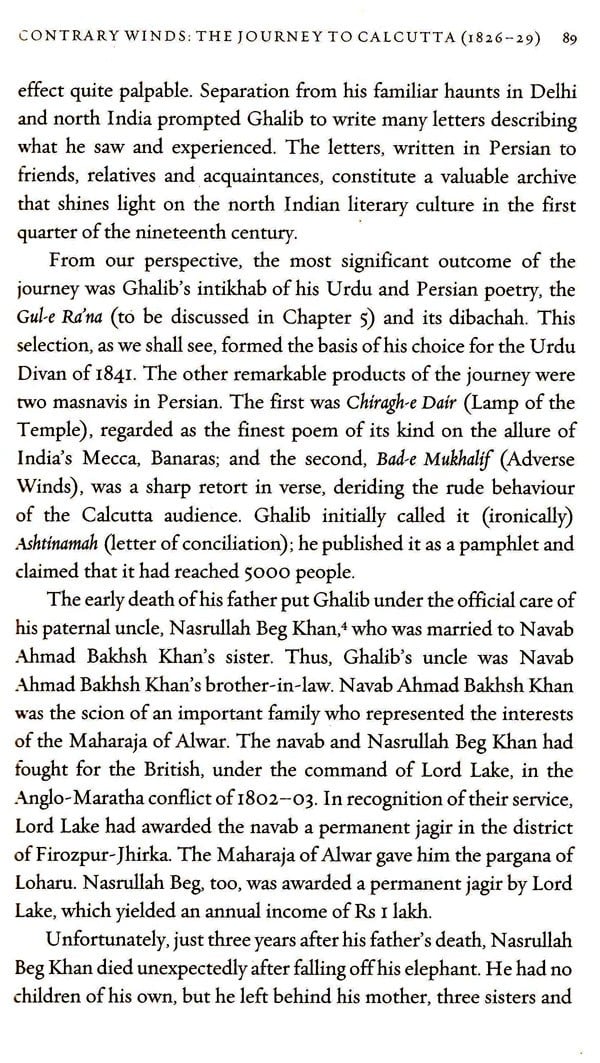 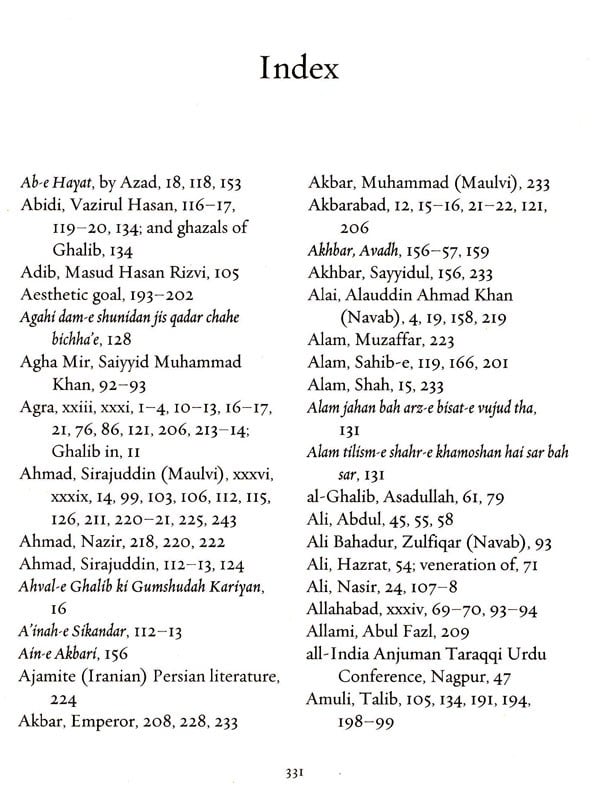 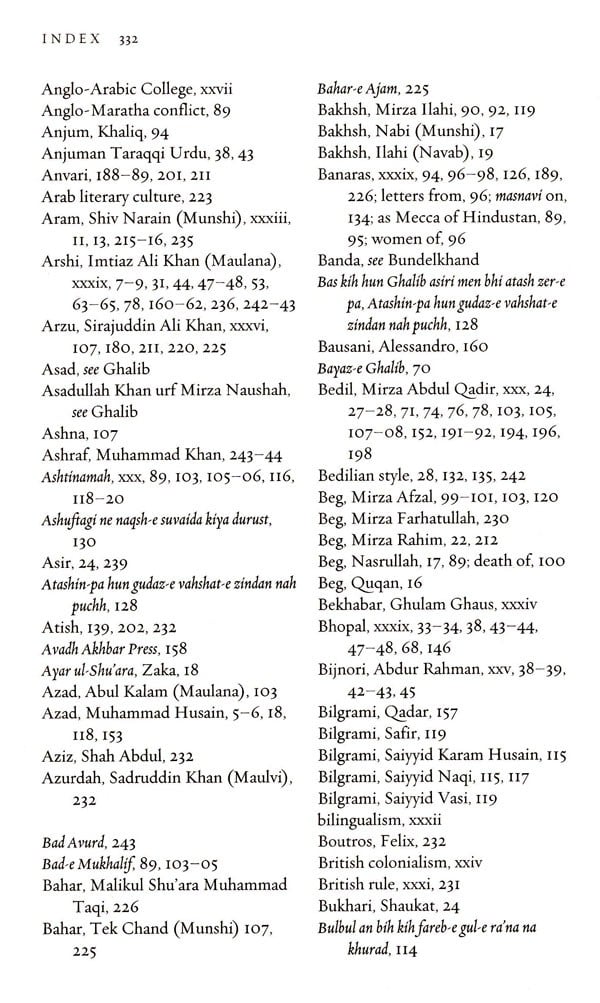