This book represents the philosophy of language in Navya - Nyaya, based upon an analysis of the "Verbal Suffix Chapter" (Akhyatavada) of Gangesa's Tattvacintamani. Since this chapter elaborates what kind of verbal understanding is generated and discusses related issues, the book demonstrates the main features of that philosophy of language and serves as a good introduction to that. The analysis mainly deals with Gatigeta, but in some cases it refers to Raghunatha. Since the book is an attempt to pursue philological exactness and philosophical analysis, it is hoped to interest not only Sanskrit scholars, but also philosophers in general.

The book consists of four lectures. Lecture I clarifies Gangesa's view of the meaning of the suffixes of a finite verb, which (meaning) is greatly disputed among the Navya - Nyaya philosophers, the Mimarhsa philosophers, and the Grammarians. Lecture II investigates how Gangesa’s determines the meaning of words and illustrates that his method bears upon ontological categories of Vaisesika. Lecture III deals with Gangesa's "Five Definitions of Invariable Concomitance Section" (Vyaptipancaka) and elucidates the relation between meaning and the logical structure of the definitions. The lecture also provides diagrams as a tool to represent the structure. Lecture IV explains the realistic standpoint of Navya-Nyaya by clarifying the concept of the counter positive (pratiyogin) of absence (abhava), or a thing whose existence is negated, focusing on empty terms or non-factual expressions such as "a round triangle", "the present King of France", "a rabbit's horn", and so forth. The lecture delineates how Udayana, Gangesa’s, and Raghunatha observed and, as the time passed, did realism thoroughly in language analysis.

Dr. Toshihiro Wada is Professor of Indian Philosophy at Nagoya University, Japan. He received a PhD degree from the University of Poona in 1988 and a DLitt degree from Nagoya University in 2002. He published Invariable Concomitance in Navya - Nyaya in 1990, The Analytical Method of Navya-Nyaya in 2007, and A Navya - Nyaya Discussion on the Meaning of the Negative Particle NaR: A Study of the Naavildakarika of Udayana (co-authored) in 2013. He also contributed papers to Journal of Indian Philosophy, Asiatische Studien, Indologica Taurinesia, Nagoya Studies in Indian Culture and Buddhism: Smhbhasil, and so forth.

This book is a collection of lectures, which I delivered as a visiting professor of the Indian Council of Philosophical Research (ICPR), New Delhi at four academic institutions during the period of 24 November through 9 December 2013: the University of Pune, Pune; Jadavpur University, Kolkata; the ICPR Academic Centre, Lucknow; and Jawaharlal Nehru University, New Delhi. First of all would like to express my deepest gratitude to ICPR, in particular to its then Chairman, Prof. Mrinal Miri, for giving me an opportunity to present the lectures at the above centers of Indian philosophy and Sanskrit study in India.

The four lectures included in the book deal in some way with the philosophy of language in Navya-Nyaya. Lecture I clarifies Gangesa’s view of the meaning of verbal suffixes, which (meaning) is greatly disputed among the Navya-Naiyayikas, the Mimamsakas, and the Grammarians. Lecture II investigates how Gangesa determines the meaning of words. Both lectures are based upon an analysis of the "Verbal Suffix Chapter" (Akhyatavada) of Gangesa's Tattvacintamani. This chapter demonstrates the main features of the Navya-Nyaya philosophy of language and serves as a good introduction to that. Lecture III deals with the "Five Definitions of Invariable Concomitance Section" (Vyaptipancaka) of Gangesa's text and discusses the relation between meaning and definition. Lecture P/ explains the realistic standpoint of Navya - Nyaya by clarifying the concept of the counter positive (pratiyogin) of absence (abhava), or a thing whose existence is negated, focusing on empty terms or non-factual expressions such as "a round triangle," "the present King of France," "a rabbit's horn", and so forth.

Lectures I and H were delivered at the University of Pune with Prof. Vasistha N. Jha (Member of ICPR) presiding; Lectures I and IV at Jadavpur University with Prof. Prabal Sen and Prof. Sukharanjan Saha presiding respectively; Lecture 111 at the ICPR Academic Centre with Prof. Rakesh Chandra (Member of the ICPR), Prof. Kamalesh Jha, and Prof. Nirupama Srivastava presiding; Lecture IV at Jawaharlal Nehru University with Prof. V.N. Jha presiding. My lecture at Jawaharlal Nehru University was designated the first B.K. Matilal Memorial Lecture. I consider it a great honor to be the first speaker in this series of lectures. On this occasion Prof. Manendra Singh (Member Secretary of ICPR) made the opening speech, and Prof. Satya Gautama (Centre for Philosophy, School of Social Sciences, Jawaharlal Nehru University and then Vice-Chancellor of Mahatma Jyotiba Mule Rohilkhand University, Bareilly) introduced me to the audience. Mrs. Karabi Matilal, wife of the late Prof. B.K. Matilal, kindly came from Kolkata to attend this memorial lecture and also made a speech. I wish to deeply thank all these scholars for their efforts and for their helpful comments following the lectures. In particular, no words can express my gratitude to Prof. V.N. Jha, who was my PhD supervisor at the University of Pune about thirty years ago, for presiding over my lecture at Jawaharlal Nehru University. It is a rare case in India for a teacher to fly in from a great distance to preside over his/her student's lecture. In addition, I cannot forget Prof. Jha's kindness for reading Gangesa's "Verbal Suffixes Section" with me in Nagoya, Japan in 1995, which enabled the research upon which Lectures I and II are based.

My thanks are also due to Prof. Ravindra Muley (Director of Centre of Advanced Study in Sanskrit, University of Pune), to Prof. Soumitra Basu (Head of the Department of Philosophy, Jadavpur University) for the hospitality given to me at their respective places, and to the audience at all the lectures for their questions and comments, which greatly helped me in the subsequent revision of my lectures. I also want to thank Prof. Nirmalya N. Chakraborty (Member Secretary of ICPR), who helped me comply with the formalities of my lecture tour before he left New Delhi.

I completed the manuscript of the present book in May 2014; but unfortunately its publication was delayed. I would like to thank Mr. Susheel Mittal of D.K. Printworld for agreeing to publish this book. 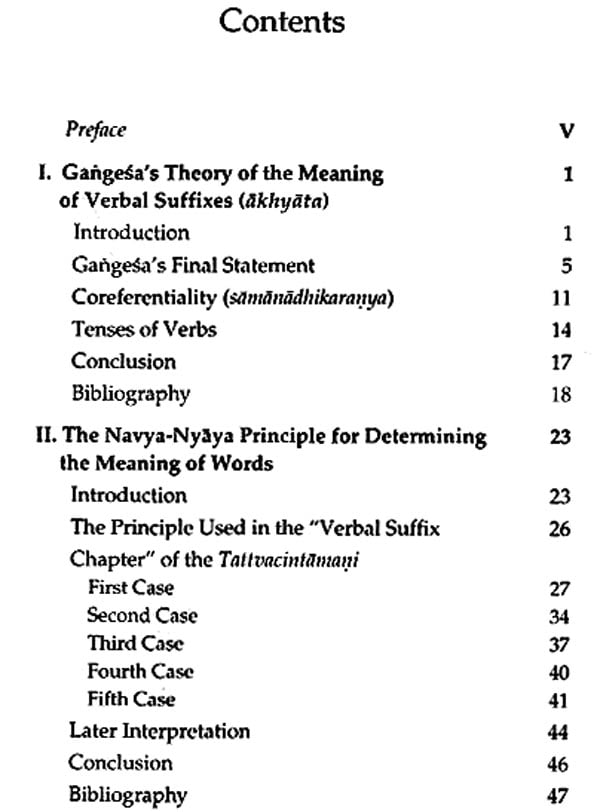 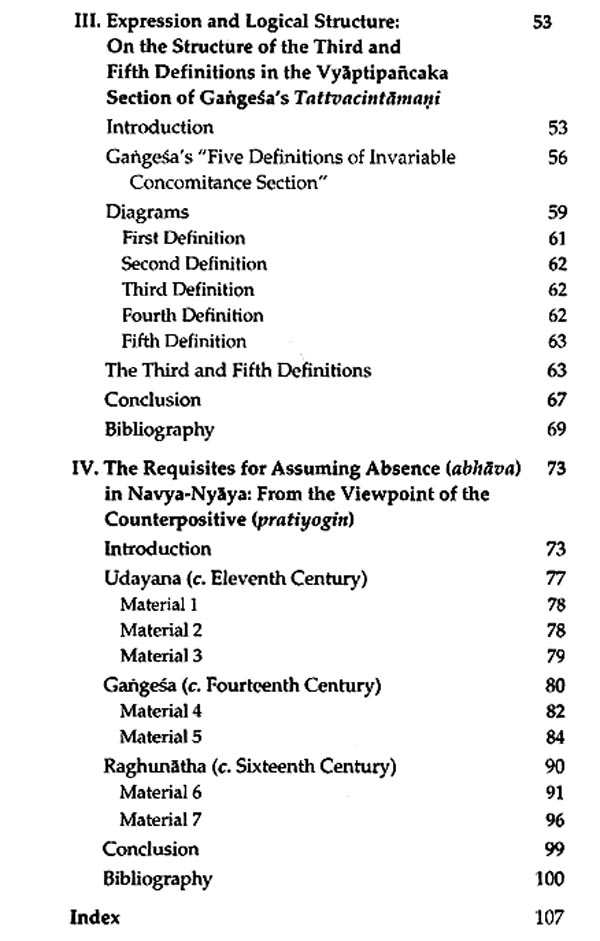 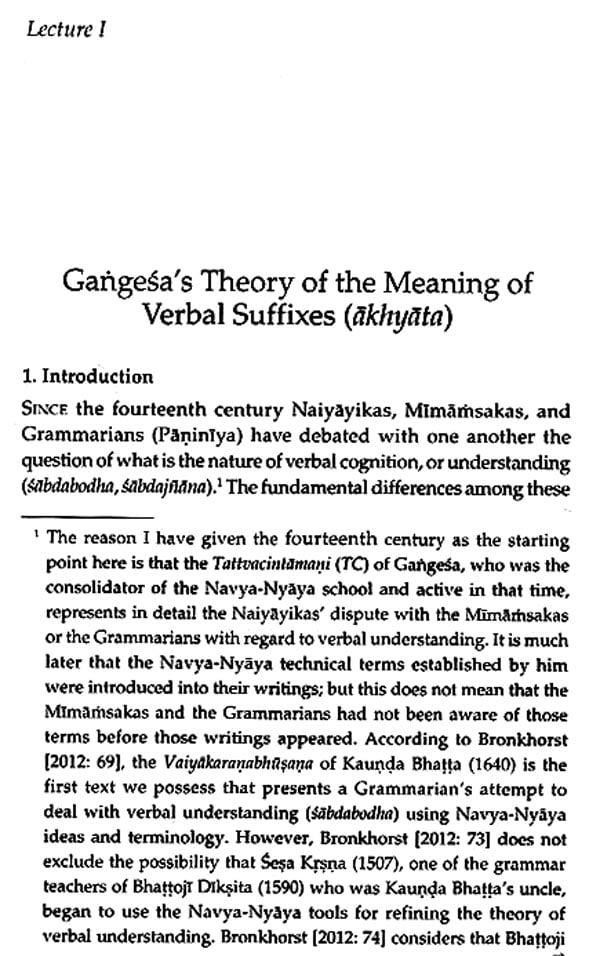 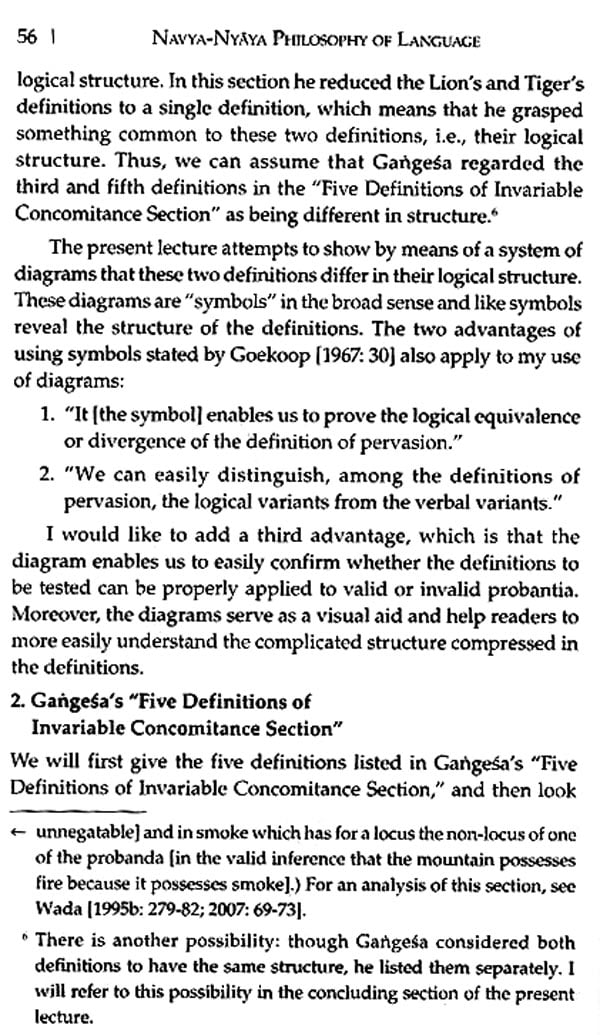 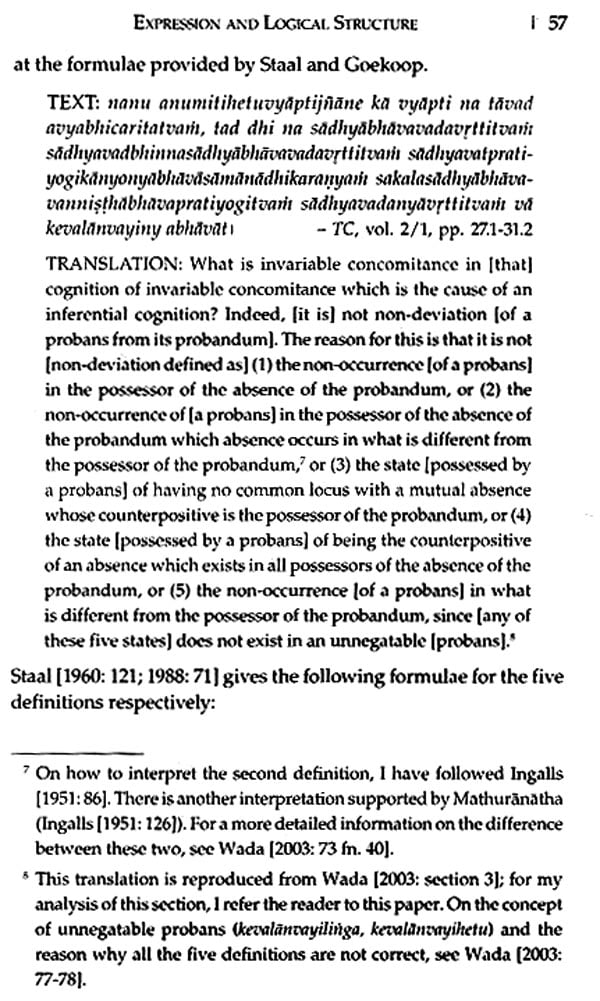 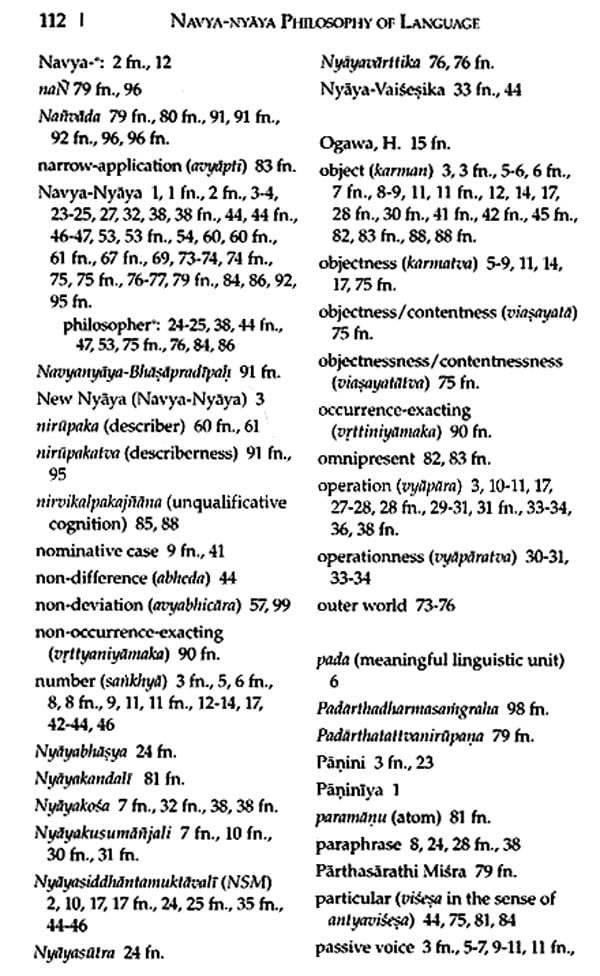 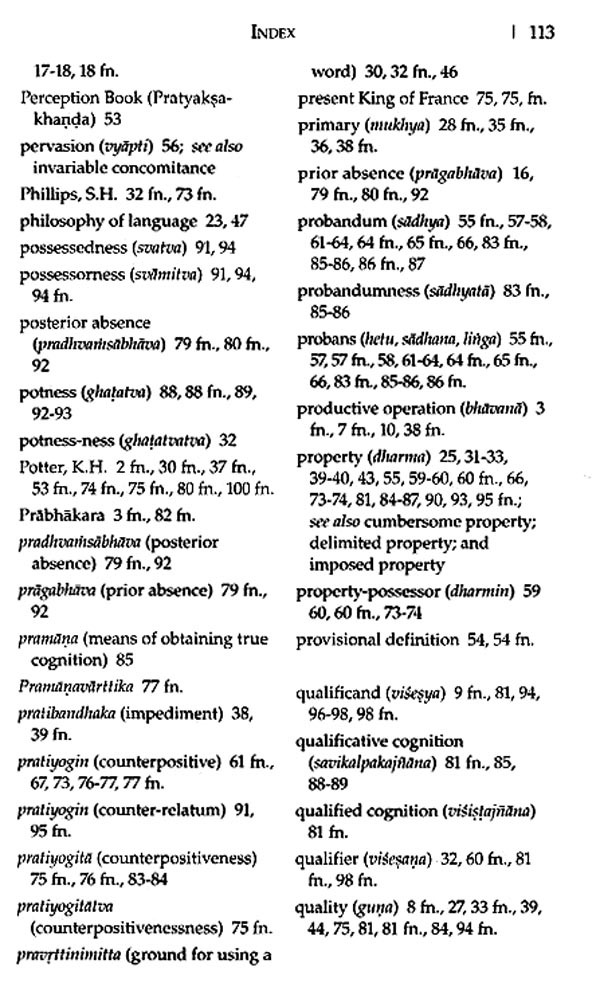 A PRIMER OF NAVYA NYAYA LANGUAGE AND METHODOLOGY: (Navya-Nayaya-Bhasa-Pradipa of MM Mahesha Chandra Nyayaratna)
By UJJWALA JHA
$23.50
Out of Stock

Manikana (A Navya-Nyaya Manual)
By Dr. E.R. Sreekrishna Sarma Forward by H.H. Ramavarma
$31
Out of Stock

The Justification of Inference - A Navya Nyaya Approach (An Old and Rare Book)
By Dr. Raghunath Ghosh
$31
Out of Stock

नव्यन्यायभाषाप्रदीप: Navyanyaya Bhasa Pradipa (Brief Notes on the Modern Nyaya System of Philosophy and Its Technical Terms)
By Shri Mahesh Chandra Nyayaratna
$31
Out of Stock

Mimamsa Nyaya Prakasa of Apadeva (An Old and Rare Book)
By Dr. K. N. Chatterjee
$29
Out of Stock 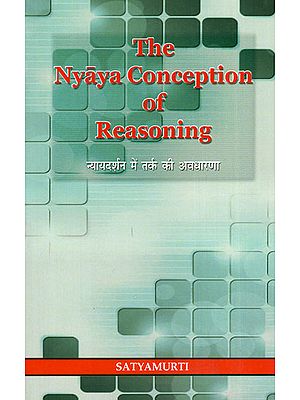