A New Education for a New Consciousness

What extraordinary times we are living in.

History seems to be moving faster than those who are making it. Well-established values are ruthlessly being challenged, and some of them have already collapsed. Our reason is unable to grasp the meaning of the events that are driving us, unable to discover how they fit into Nature's" evolutionary plan.

Is there, hidden behind our present upheavals, an Intention that surpasses our understanding? Is there some immense Power that is directing the course of euents a.nd setting them in theirrightplace?

For Sri Aurobindo, the answer was clear:

"There are particular movements in particular epochs," he said, "in which the Divine Force manifests itself with a supreme power, shattering all calculations, making a mock of the prudence of the careful statesman and the schemin politician, falsifying the prognostications of the scientific analyser and advancing with a vehemence and velocity which is obviously the manifestation of a higher than human force. These are the times when we say God is in the movement. He is its leader and it must fulfil itself however impossible it may be for man to see the means by which it will succeed.

Referring to the vast changes he foresaw, Sri Aurobindo once remarked:

"The events that sway the world are often the results of trivial circumstances. When immense changes and irresistible movements are in progress, it is astonishing how a single event, often a chance event, will lead to a train of circum- stances that alter the face of a country or the world. At such times a slight turn this way or that produces results out of all proportion to the cause. It is on such occasions that we feel most vividly the reality of a Power which disposes of events and defeats the calculations of men. The end of many things is brought about by the sudden act of a single individual. A world vanishes; another is created almost at a touch. Certainty disappears and we begin to realise what the pralaya of the Hindus, the passage from one age to another, really means and how true is the idea that it is by rapid transitions long-prepared changes are induced. Such a change now impends all over the world, and in almost all countries events are happening, the final results of which the actors do not foresee."

Still, there are clues to guide our baffled intelligence, and we find them exposed in the light of Sri Aurobindo's vision of the future. From this perspective, one certainty emerges: the dumbfounding crisis we are witnessing today is not merely a crisis of civilisation but" a crisis of evolution itself”.

The evolution of life upon earth he affirms is clearly an ascending one. This is shown by the increasing complexity of the forms created throughout the ages, forms better and better equipped to express a growing consciousness.

Man is at present the highest form of life on earth. But the fact that he now stands on the peak of evolution does not mean that the ascent is over. How can a being so painfully limited as man be the final term of the evolutionary endeavour?

Steeped in convention and prejudice, prey to the illusions and elusions of his short-sighted knowledge, man is now battling with the contradictions of his own mental systems. Given his limitations, will he be able to find a way out, r, rather, a way in? Will he be able to control the magnitude and complexity that his outer life has assumed? Will he be able to properly use the secrets of life he has discovered? Or manage an economy expanded to a planetary scale? Or bear the on sequences of his exploration of space? These are but a few of the problems whose "universality" is obvious. What of those that man is not yet even aware of?

"The evolution of human mind and life," said Sri Aurobindo, "must necessarily lead towards an increasing universality; but on a basis of ego and segmenting and dividing mind this opening to the universe can only create a vast pullulation of unaccorded ideas and impulses, a surge of enormous powers and desires, a chaotic mass of unassimilated and intermixed mental, vital and physical material of a larger existence which, because it is not taken up by a creative harmonising light of the spirit, must welter in a universalised confusion and discord out of which it is impossible to build a greater harmonic life. "

Thus, to create a "harmonic life", man must outgrow his little mind and ego and universalise himself. It is vain to hope for a true change of human life without a change of human nature - a change that seems to be" an impossible miracle".

What a challenge to our poor ratiocinations! If the solution depended on them there would certainly be no hope. But in fact the “impossibility” exists only for our lineary vision. There is a Light and Power of the Spirit what Sri Aurobindo called the “Supermind”, which presides over the movements of the evolution, and can transform human consciousness and remould life upon earth. 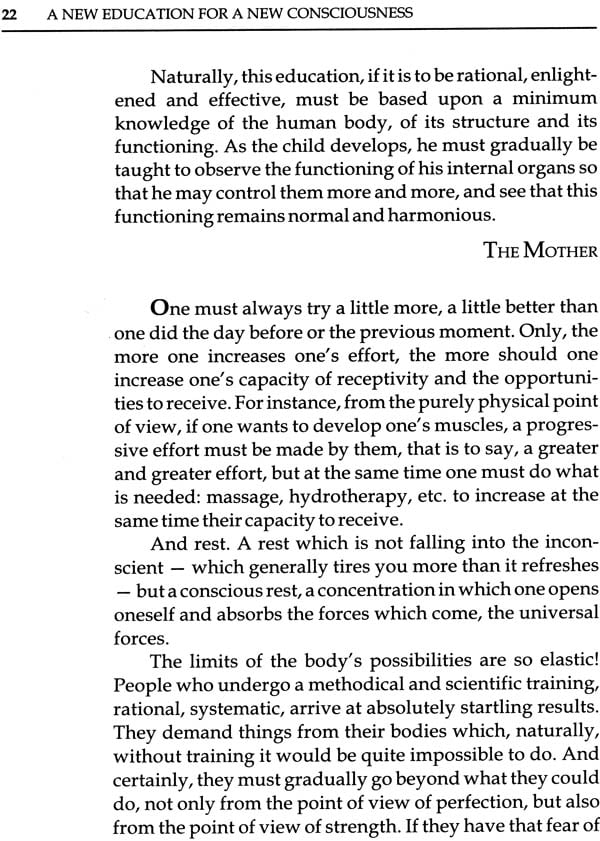 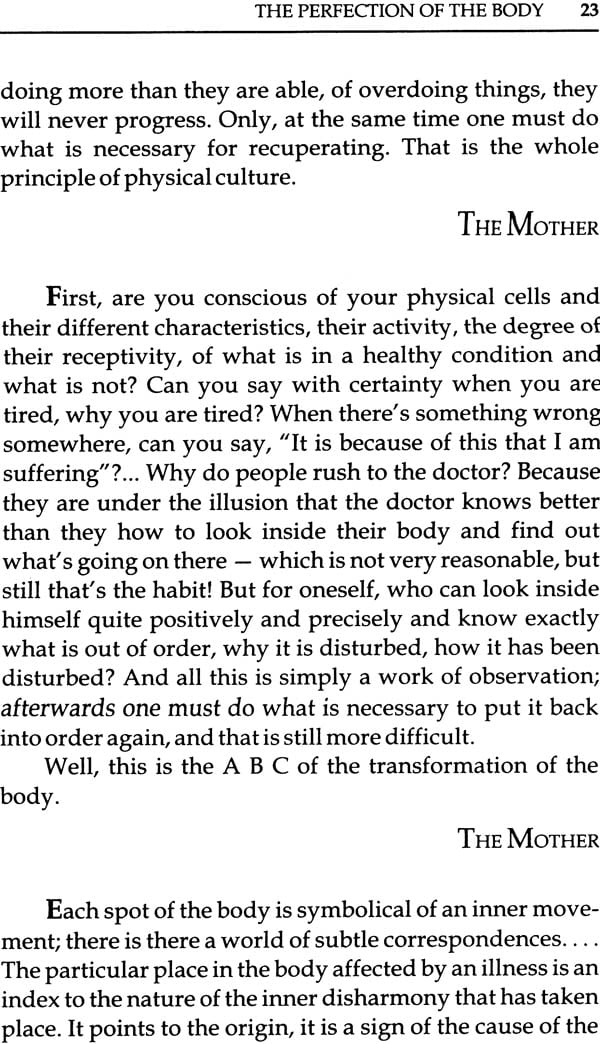 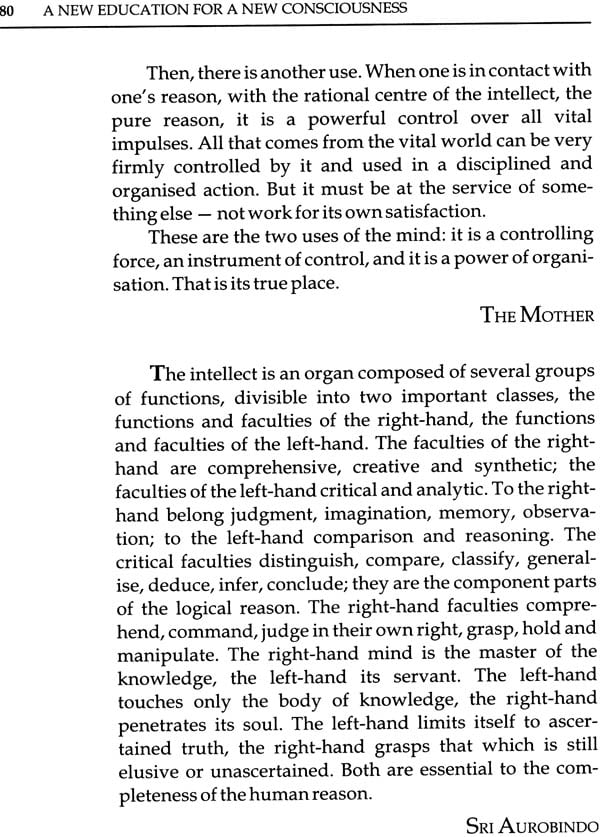 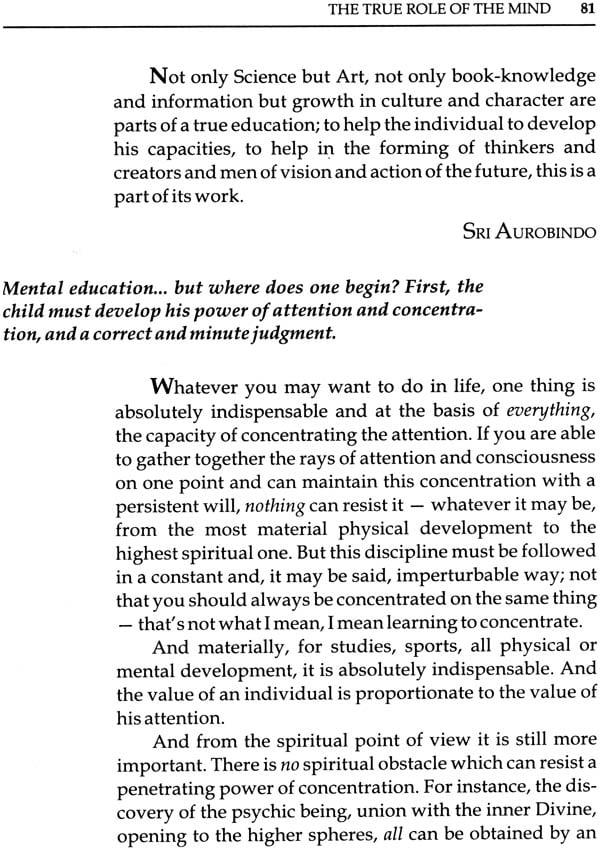 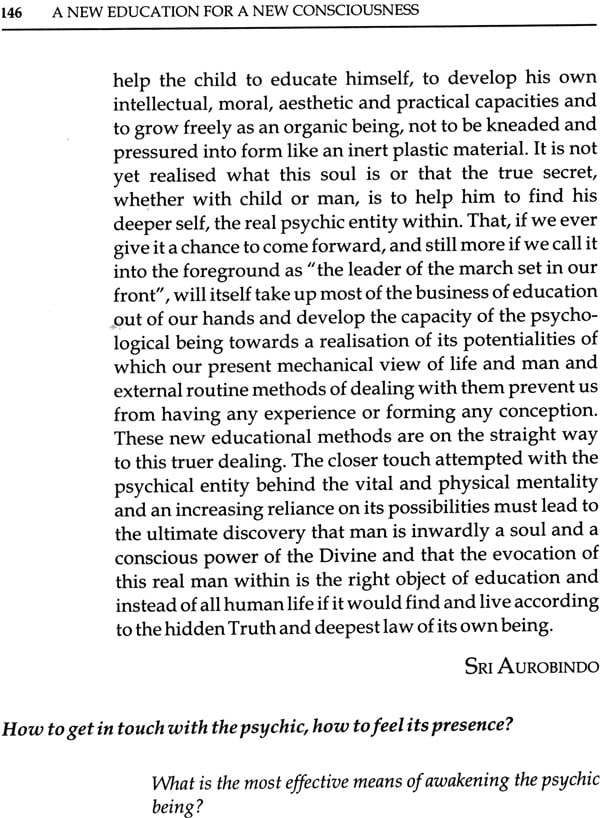 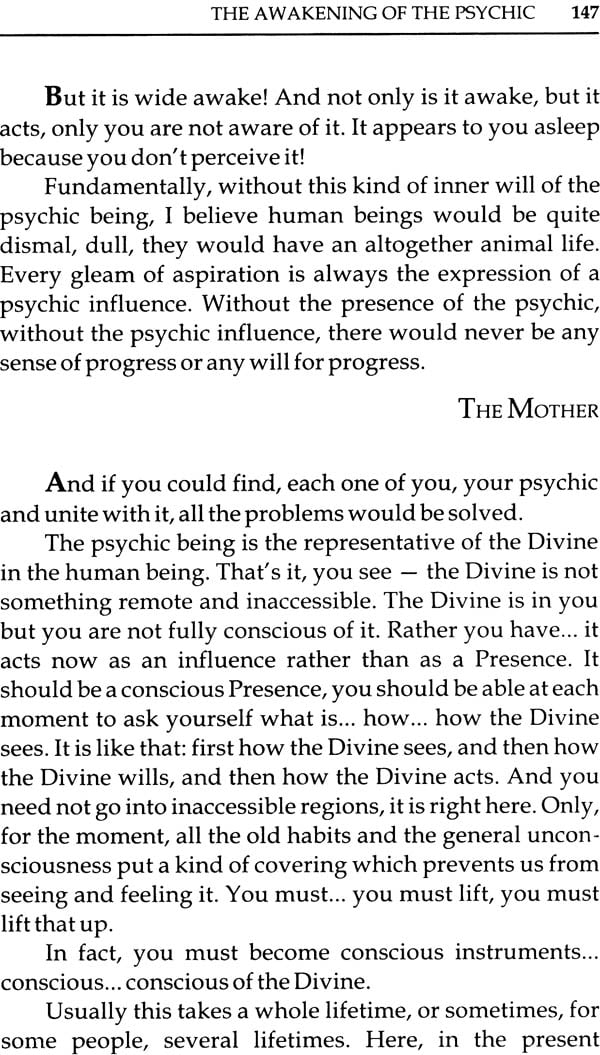 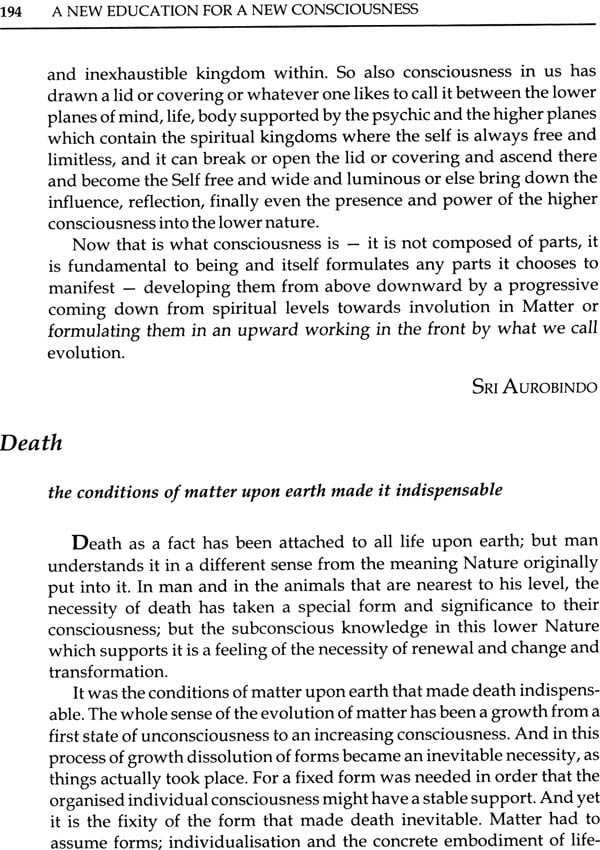 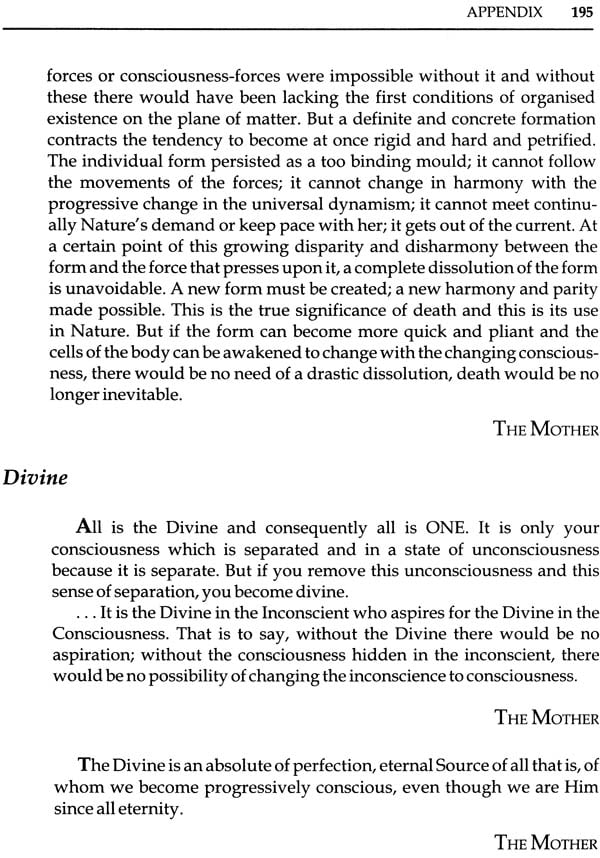 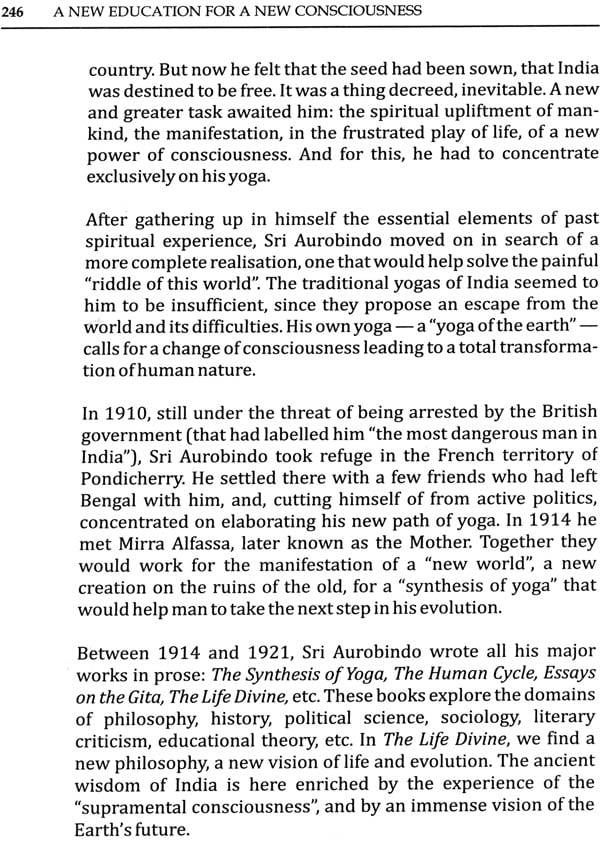 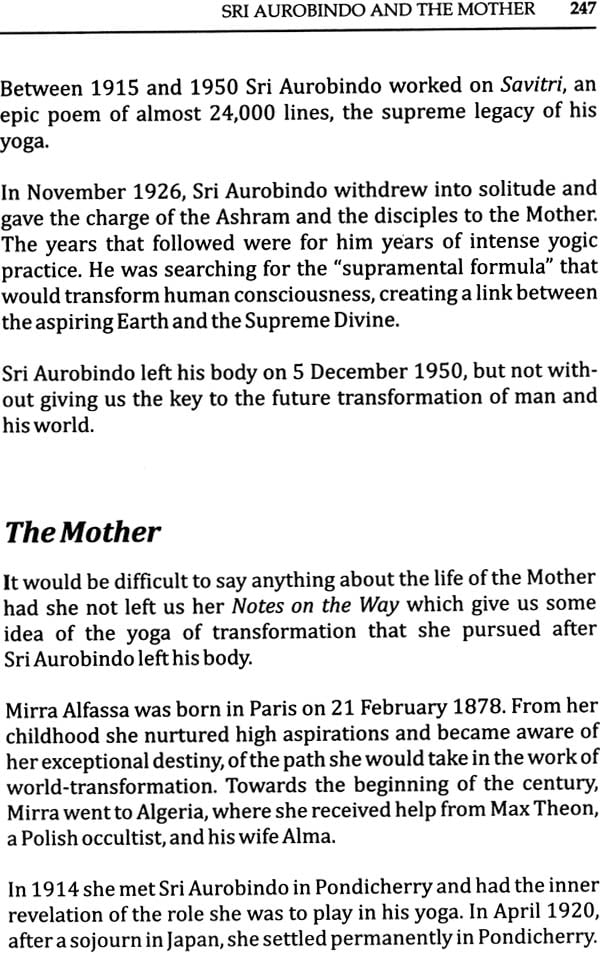 The Life of Sri Aurobindo
By A. B. Purani
$31
FREE Delivery Sri Aurobindo and The Freedom of India
By Chanda Poddar, Mona Sarkar and Bob Zwicker
$24.80
FREE Delivery
$31  (20% off) Autobiographical Notes and Other Writings of Historical Interest
By Sri Aurobindo
$24.80
FREE Delivery
$31  (20% off)