Nikhil Banerjee (Down The Heart of Sitar)

This biography, drawing on extensive interviews, contemporary reviews and archival documentation, offers and intimate profile of Nikhil Banerjee, the youngest of the trio of twentieth century masters of the Sitar; following his creative evolution through his close interactions with Ustad Alauddin Khan, Ustad Ali Akbar Khan, Annapurna Devi, Ustad Vilayat Khan and Ustad Amir Khan. Moving beyond the facts of the master's life, the author provides rare insights into the personal style and the baaj that he had developed for himself, and extensive documentation of Nikhil Banerjee's recorded recitals.

With a Masters in English from Calcutta University, Swapan Bandyopadhyay has taught at the Ramakrishana Mision Vidyamandir, Belur; Visva-Bharati University; and Barddhaman Vivekananda College. He Received his taalim in Sitar from Indranil Bhattacharya, a disciple of Ustad Alauddin Khan. His published work inculde Annapurana: An Unheard Melody and Taar Chhindey gechhey kabey. He has written extensively on music and culture.

Pandit Nikhil Banerjee was a devoted Sadhak of Ma Sarawati. He took his early taalim in sitar from his father Shri Jitendranathji, Ustad Mushtaq Ali Khansahab and Birendrakishore Roychowdhury, a Zamindar in what is now Bangladesh. Then he came to Mihar for taalim under Baba... and that's when I met him.

My first assignment , as it were , was to teach Nikhil the Tameez needed for learning from Baba. However, i don't think I did a good job of it. I had advised him against performing before Baba , but when Baba told him ,'kya raga bajate ho, humko sunao', he proudly played Raga Purvi. When he finished , Baba jumped up gave him thumbs down and yelled ,'Purvi nahi murgi bajaya , murgi'. And then Baba put him up in a room next to his and Nikhil started in earnest: palta ,alankaara, Murchhana, taan, meend... Baba always adjusted his taalim to a particular student personality and temperament. Nikhil was shy and his temperament sober. Baba's individualized taalim in Dhrupad style gave Nikhil's playing that haunting feel and helped him create magic and maintain the mood of the raga whenever he played Shiranjani, Malkauns or Sindhu Bhairavi .

After his taalim under baba at maihar , Nikhil moved to Mumbai when Dada (ustad Ali Akbar Khansahab) settled there. In Mumbai, he learned from dada and also played for Hindi films . He could have made a lot of money doing this but he only played to earn enough money to sustain himself and devoted rest of his time learning and practicing.

He went to Kolkata, when Dada opened the Ali Akbar College of music there and become my shishya when I started teaching there. Music was Nikhil's passion and sitar his soul. He did his riyaaz before every concert - He was probably the only artist who came home and practiced till the wee hours of the morning after giving a concert at night.

My congratulations to swapan for sharing Sadhak Nikhil Banerjee's life with people through this book. I hope that this biography of one of the greatest sitarists of the twentieth century is read by globe and that the readers apprehend and appreciate the real meaning of the oft repeated phrase 'the pursuit of excellence ' while reading it.

Listening to Pandit Nikhil Banerjee is instructive and contemplative. A performance by Nikhil Banerjee was a rare assimilation of classical precision , grandeur and dignity. Indeed it is great art- a perfect balance of imaginative depth and sensitivity . Music for him was a path of self- realization , to be performed in a spirit of prayer. while playing , he would completely immerse himself in the Raga. As he often said , it was important to submit to the notes of a raga , not merely to strike it, but it embrace it with the purest feelings of one 's heart . In his interview to Ira Landgraten [11.9.85] ,Nikhil spoke of his vision of the elevations of all great art into the realm of the supreme :'... for a few moments good music , good literature , good poetry ,a good picture lifts you up and you forget your whole body and surroundings. That is the purpose of the art. As i listen to Nikhil's sitar , all that went into his becoming comes to my mind in a flash and that is how the idea of writing this book evolved . This volume thus is an attempt to present the musician's genius in the marking.

Till recently writing on the lives of Indian musicians was not much in vogue for various reason . Firstly , the life of a Guru follows a culturally predictable and perhaps even a monotonous paradigm. Uniformly, he has a poverty - stricken childhood. As he chances upon his Guru, he exhibits his prodigious power. The Guru transmits his best to the disciples which enables a golden and smooth sail to the top. The Musicians Guru is beyond rational analysis and he is fed upon by the Guru and his shishyas. Moreover, the musicians -subject ordinarily -subject is so last in the world of music that he seldom provides the solid base of his so-called 'mundane' life.

Still , more significantly recently , musicians biographies , authoritative or otherwise , are flowing out from the pens of writers not associated musically with their subject. They tend to be usually well- documented , well- researched and impartial , mixing the rainbow hues of imagination with the solidity of granite as Virginia wolf vouched for in a balanced biography. I do not stake any claim for such excellence . but i have in general sought to make the life of Nikhil as near the truth as possible by providing an imaginative reconstructed of details based on solid data.

Nikhil was lost in the glorious haze of great performers -both instrumental and vocal - in his early , formative days . After achieving name and fame in the seventies he kept himself cocooned with his private world. His was the privacy of glorious light. He had and amiable disposition and made frequent musical journeys in India and abroad including the United Kingdoms ,USA ,Germany and the Scandinavian countries. But he lived the life of a recluse . When he was not playing he shut himself off in his cosy, two-storeyed retreat named 'Nirab' or 'Silence' in Jodhpur park, Kolkata. He spent his time mainly practicing on the sitar and reading Tagore and other books on philosophy in seclusion. As his eyesight grew feebler due to serious problems with his retina, he entrusted tabaliya Abhijit Banerjee with the task of reading out from books for him.

May be it is also due to this withdrawal from the outside world and his strict adherence to individual riyaaz on the sitar that he would not generally accept young aspirants as disciples. He left the world leaving no Shishya through his baaj was the most loved , sought after and imitated during and after his life. Nikhil's reclusiveness makes my task difficult and challenging.

I have tried primarily to present a straightforward chronological/biographical sketch of the sitarist from his early boyhood days in Kolkata in search of the perfect Guru, his oscillations- not always his feat, but of circumstances - from one guru to another, the magical touch of the great master Ustad Baba Alauddin Khan in his efflorescence as the ultimate artiste through his taalim from Ustad Ali Akbar Khan and Annapurna Devi and his tangential raport with Ustad Amir Khan ; the data collected from interactions with his family and his gurus and browsing through articles and literature published on Nikhil and allied narratives. 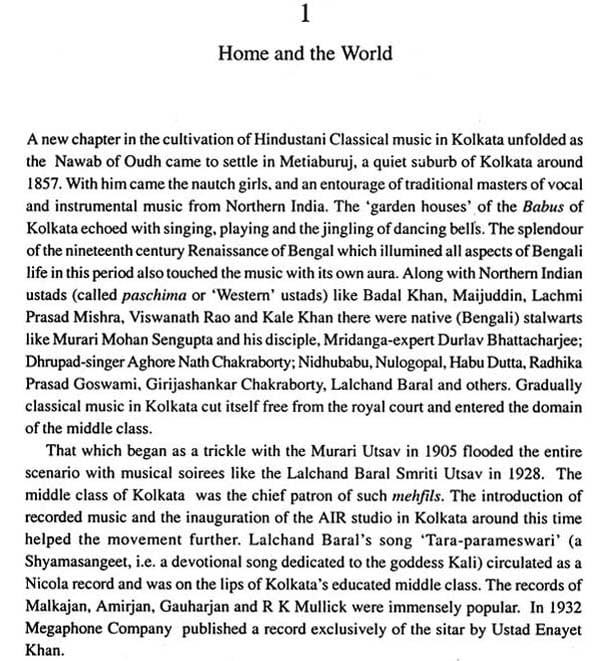 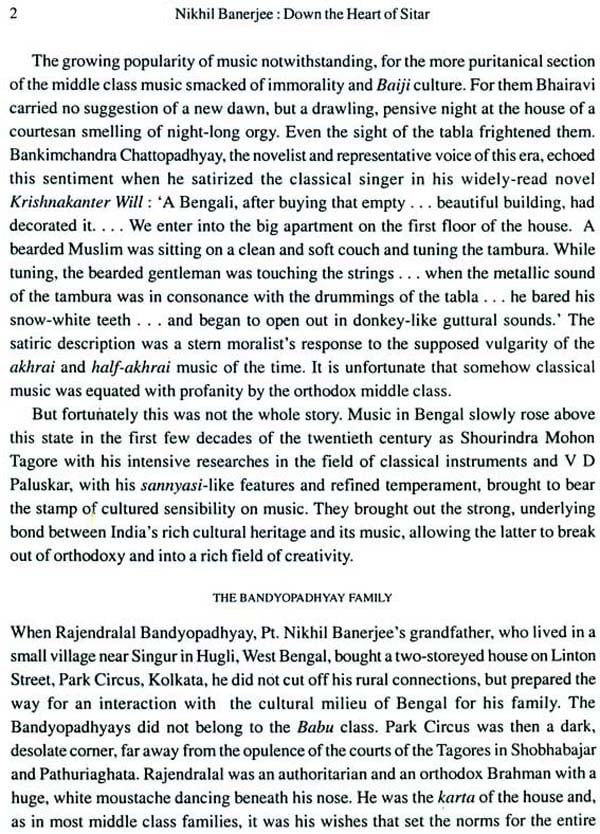 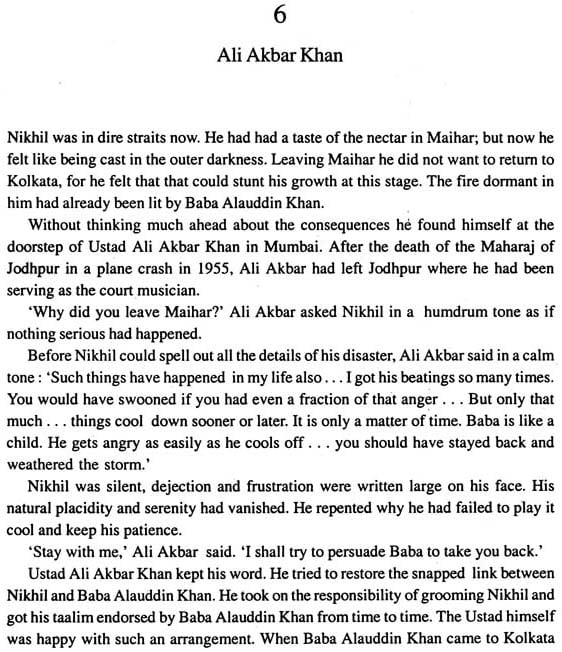 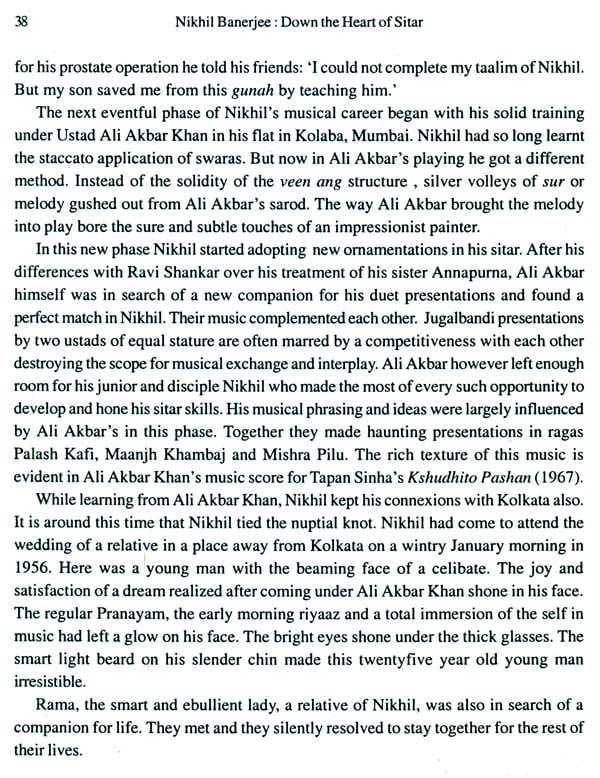 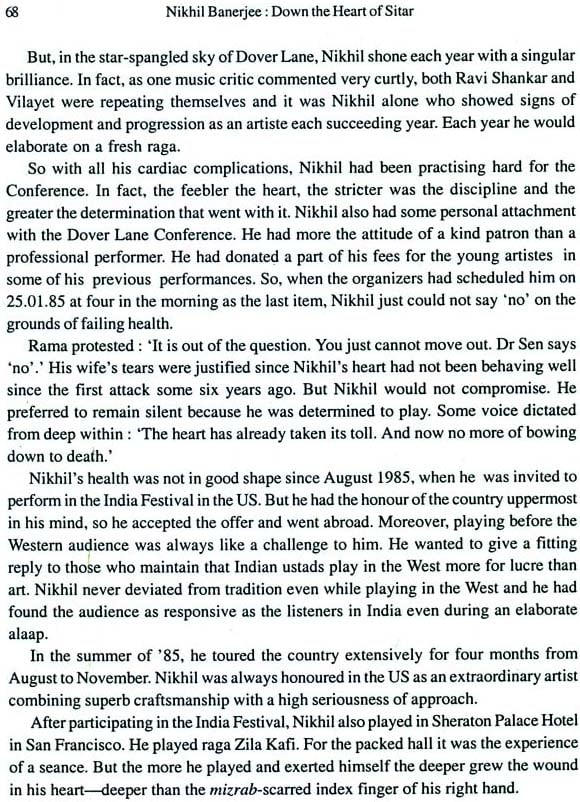 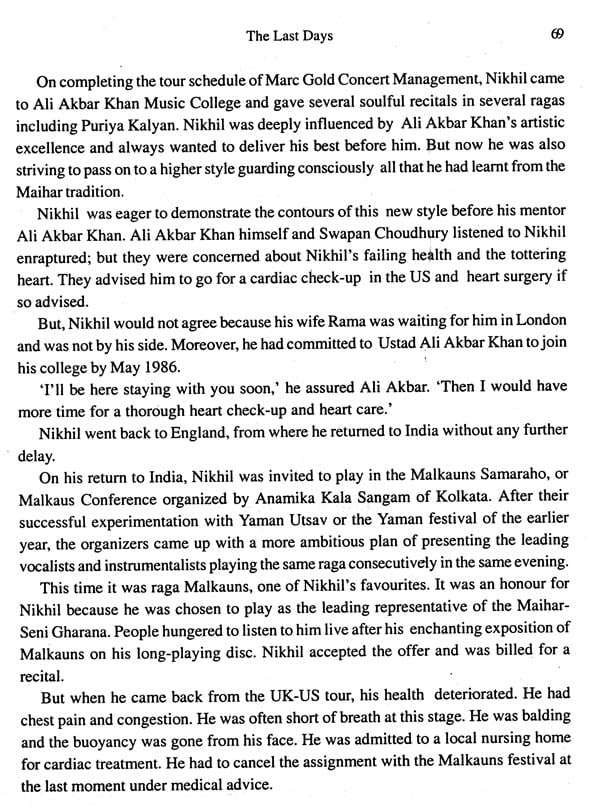 The Sound of Sitar
By Subroto Roy Chowdhury
$16