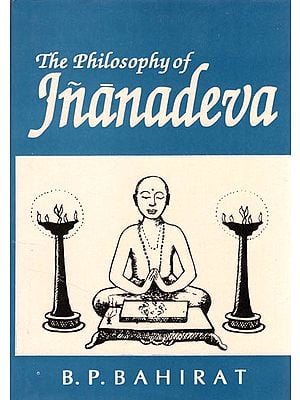 The present work is devoted to the philosophical teachings of Jnanadeva, the well-known 13th century saint and genius of Maharashtra, in whom we find a rare combination of poetry, philosophy and deep religious experience. The author has based his work mainly on Jnanadeva's Amrtdnubhava, but he has also taken into consideration other works of Jnanadeva. He gives a clear and lucid exposition of Jnanadeva's theory of Chidvilasa, which is approached by him through an acute criticism of the theory of Avidya. He also shows how Jnanadeva's philosophy culminates in his conception of natural devotion and forms a firm foundation of the Bhakti cult in Maharashtra. The views of Jnanadeva are also compared with those of Eastern and Western thinkers.

This is the first attempt to present in English the Philosophy of Jnanadeva in a systematic form and to convey a clear vision of his lofty and integral idealism.

"Mr. B.P. Bahirat M.A. has tried to bring out a synthesis of the philosophical teachings of Shri Jnaneshwar, the greatest saint of Maharashtra, with particular reference to the Amritanubhava. The Amritanubhava is a very difficult work and it is no simple job to deduce Jnaneshwar's teaching from it. Mr. Bahirat has succeeded well in his achievement. He has focused his attention particularly on four topics-Metaphysics, Cosmology, Nature of Jiva and Bhakti doctrine. He has also discussed the influences on the philosophical thought of Jnaneshwar from the times of the Upanishadas down to the age to Shamkar and Gorakhanath. He has also made a comparison of the teachings of the Amritanubhava with those of Plotinus, Spinoza, and Bradley. It is a task of great labor and I think Mr. Bahirat has succeeded well in his undertaking."

JNANADEVA was a great genius of Maharashtra in whom we find a rare combination of poetry, philosophy and deep religious experience. As a saint he is held in high respect among religious sects. As a poet he is appreciated among literary circles. His contribution to the solution of the persistent problems of philosophy has not been however, fully recognized. As a matter of fact this contribution is his great gift not only to Maharashtra but to all mankind for whose welfare his heart yearned day and night. He has written all his works in his mother tongue-Marathi. It was but natural on the part of the eastern or western scholars not acquainted with Marathi language, to have neglected them. Some Marathi scholars have tried to explain his philosophical view point. But some of them have neglected his peculiar contribution while others have not brought forth its full significance. An attempt has, therefore, been made in this work to present in English the philosophy of Jnanadeva in a systematic form and to convey a clear impression of his lofty and integral idealism.

The chief works of Jnanadeva are Jnaneshwari, Amri-tanubhava and Abhangas or religious lyrics. Jnaneshwari is his famous commentary on the Bhagawad Gita. This classical work is selected by the famous world-organization UNESCO for translation into English. French and Spanish languages for international propagation. The Abhangas or religious lyrics of Jnanadeva are mainly the outpourings of his devotional heart though they also contain his religious and moral teachings as well as descriptions of his yogic experiences. Amritanubhava, however, occupies a unique position. It is an independent work that sets forth clearly his philosophical point of view. The present work is mainly based upon Amritanubhava. The other works of Jnanadeva have also been taken into consideration and they yield a more consistent world view when seen in the light of Amritanubhava.

Jnanadeva's original contribution to idealistic thought in Indian philosophy is his theory of Chidvilas or the play of the Pure Intelligent Atman. The main target of his criticism is the theory of ignorance advocated by Shamkar. Though other thinkers like Ramanuja have criticised it before him, Jnanadeva does it in his own way, He stands on the same Advaitic ground as Shamkar and points out the discrepancies in the conception of ajnana or ignorance and also shows the lines of its consistent developments. The rejection of the conception of ignorance results in the transformation of the conceptions of God, the individual self and the world. God is not the phenomenal appearance of the Absolute as Shamkar believes. He is the very Absolute and contains within Himself the principle and the explanation of plurality. The world is not caused by Maya or the mystery of ignorance but it is the expression of in-finite Divine love and joy. So Shamkar's attitude leads to asceticism while Jnanadeva's angle of vision leads to the path of loving devotion and self-less activism.

According to Jnanadeva it is not the Maya but the power of the Lord that is responsible for the appearance of the world. This doctrine resembles to that of Kashmir Shaivism. But Jnanadeva does not stop here. He analyses the conception of this power and comes to the conclusion that the power is the power of love. So the love of God becomes the central reality of which His power and wisdom are but aspects. Love is not the quality of God, but God Himself, out of which all creation flows spontaneously. This infinite love is the deepest fact of the universe. There is a tender divine benediction over all things. So Jnanadeva says that God and his Love are the only two inmates of the home of the universe and not even a blade of grass is created without their mutual help. (Amt. I, 12-13).

To appreciate and fully realize in life this spring of Divine Love is Bhakti or the supreme devotion. It is called by Jnanadeva "Akritrim Bhakti" or natural devotion. As the temple, the deity and the worshippers can be hewn out of the same mountain-rock, so there can be the process of devotion even in the state of union with God. (Amt. IX, 41) As the Ganges united with the ocean plays upon its bosom, so the devotee united with God experiences the sweet flavor of devotion .(Jnaneshwari, XVIII, 1138) "It is in love, and in nothing else that we find not only the supreme value of life but also the supreme reality of life and indeed of the universe" these words of McTaggart (quoted by Dr. T. M. Forsyth, M.A., D.PHIL., in his "God and The World" p. 146) will represent the view of Jnanadeva if we under-stand love to mean not merely a personal love felt by one individual for another, but its very spring that wells up in the heart of Divinity. So Jnanadeva called his work Anubhavamrita" which means "The sweet Nectar of Ex-perience".

Indian idealism proceeding from the Upanishadic philosopher Yajnyavalkya finds its matures expression in the writings of Jnanadeva. As such it deserves a place of honor in the history of Indian philosophy. His philosophic view point leads to activism in addition to supplying a sound theoretic foundation to the Bhakti cult in Maharashtra. 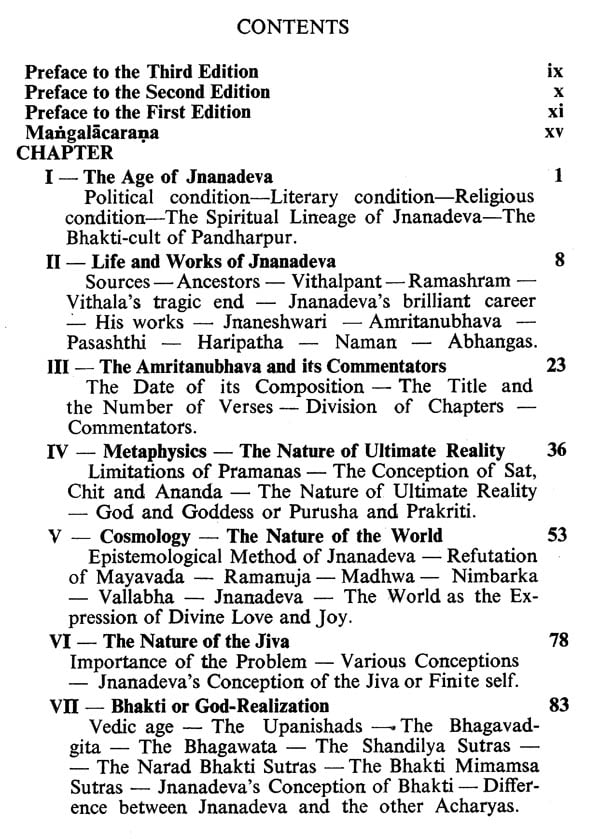 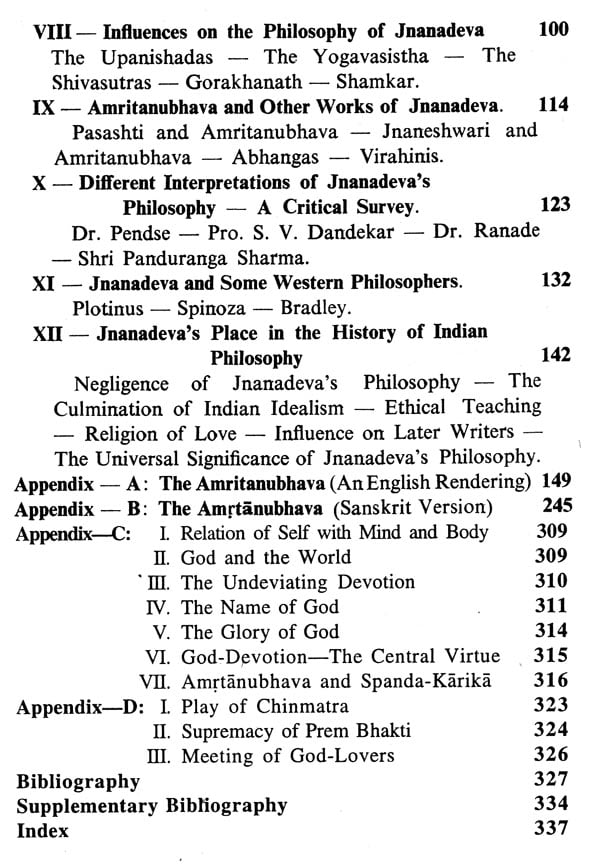 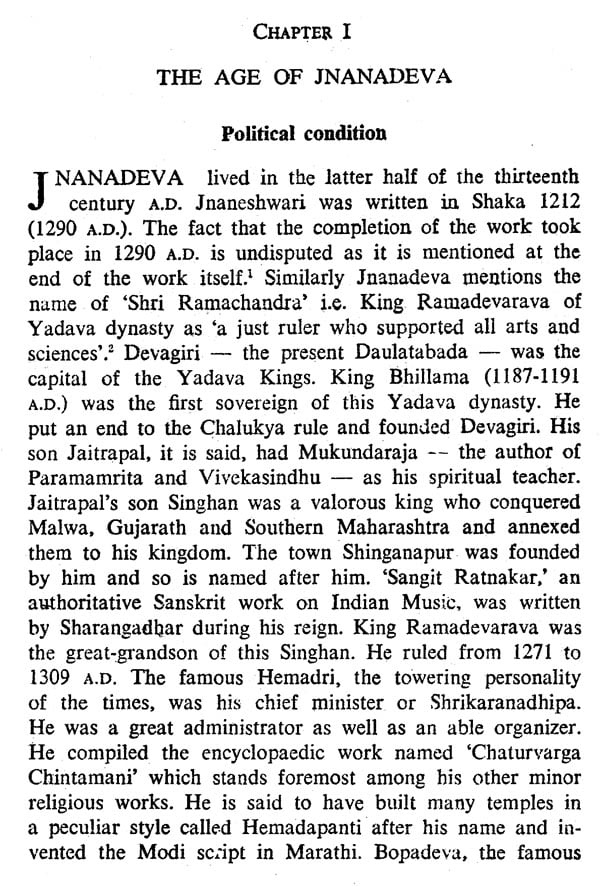 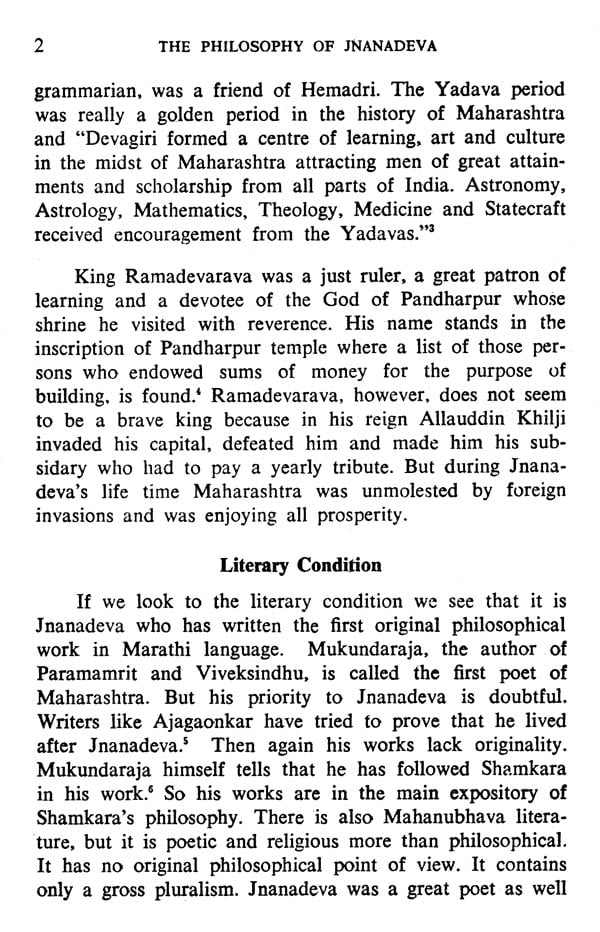 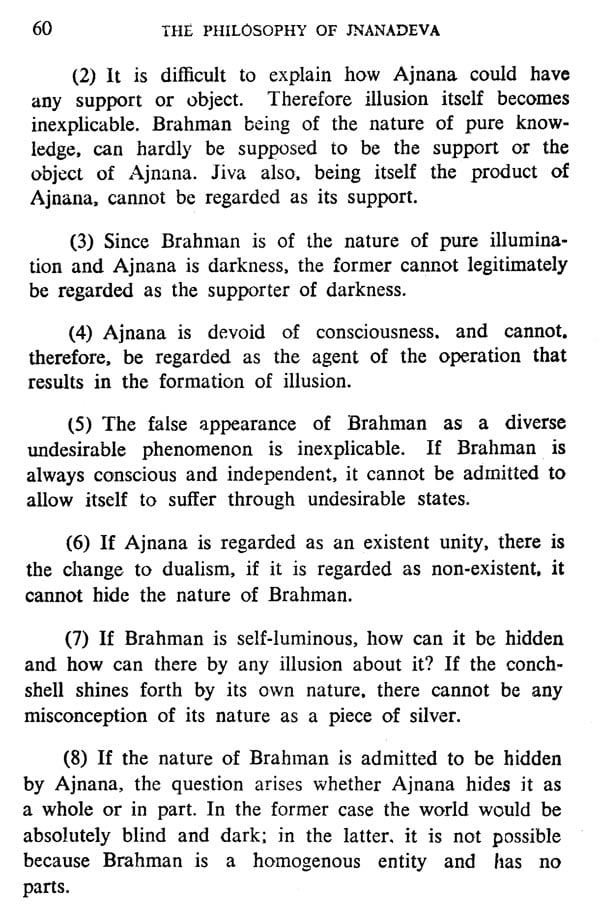 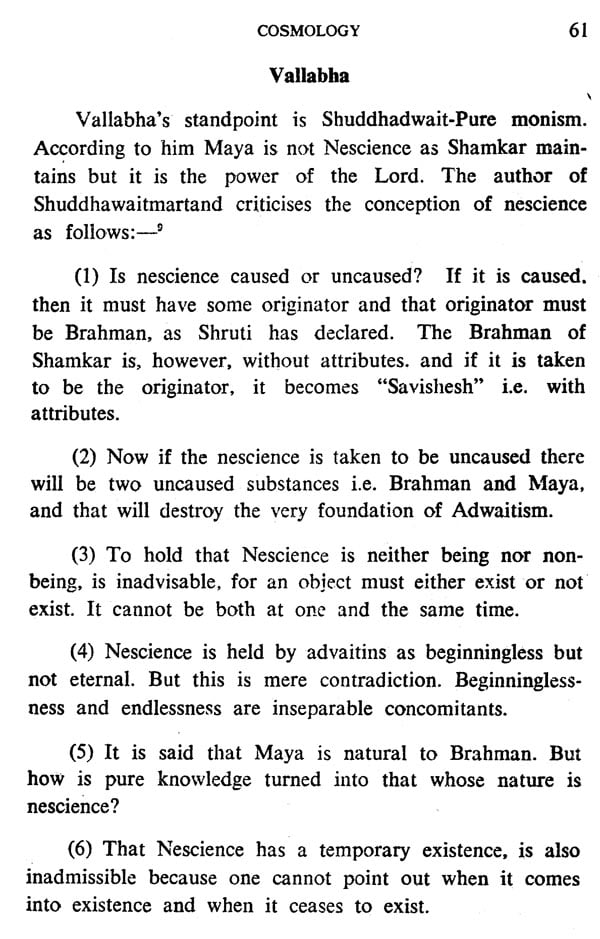 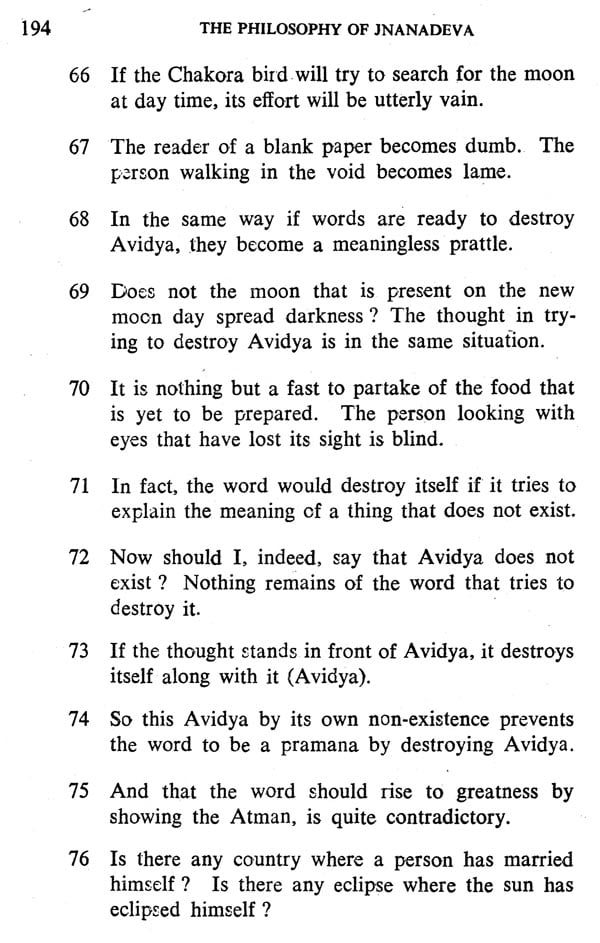 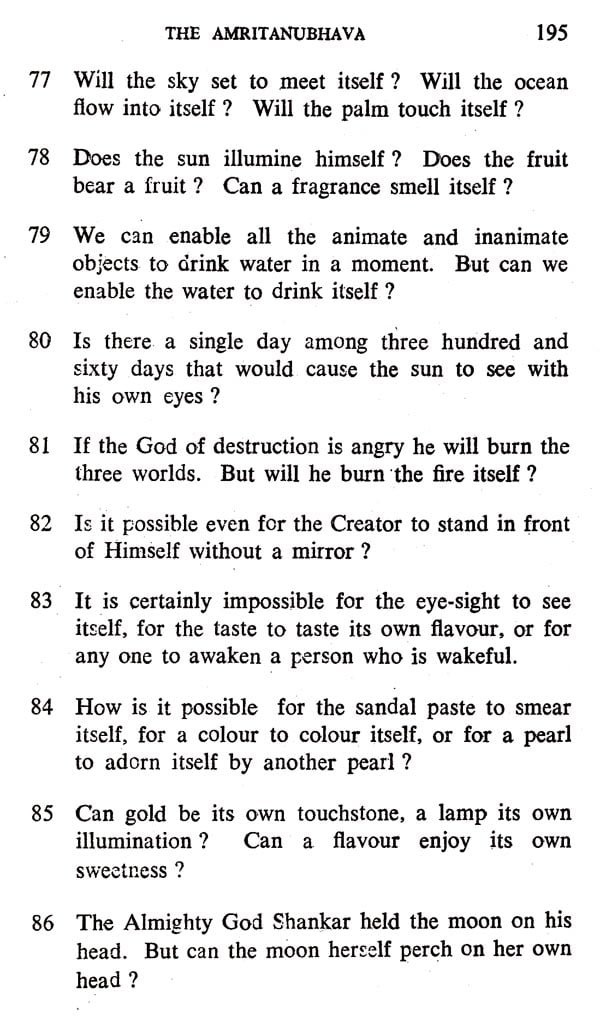 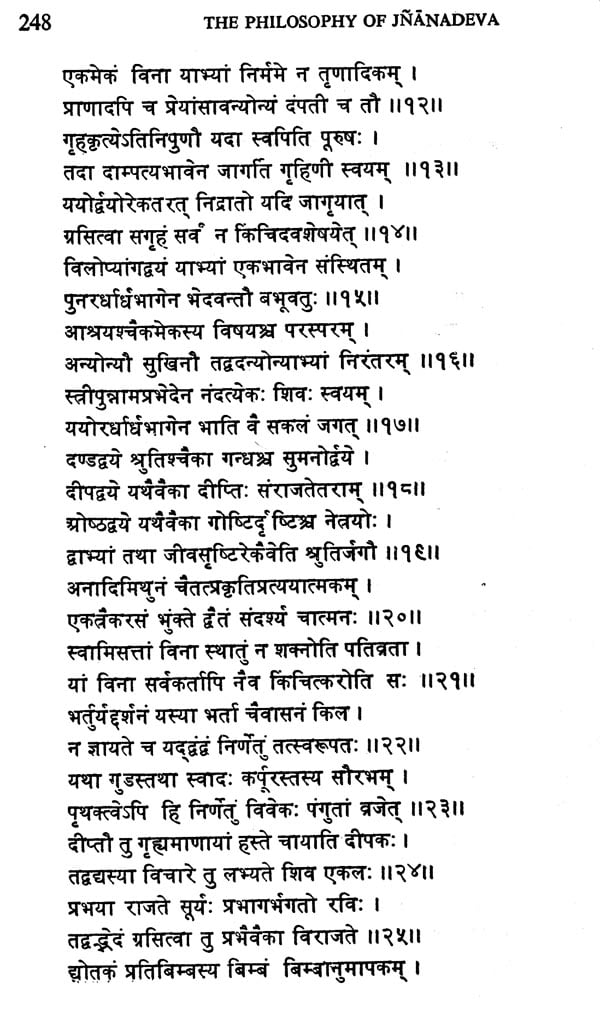 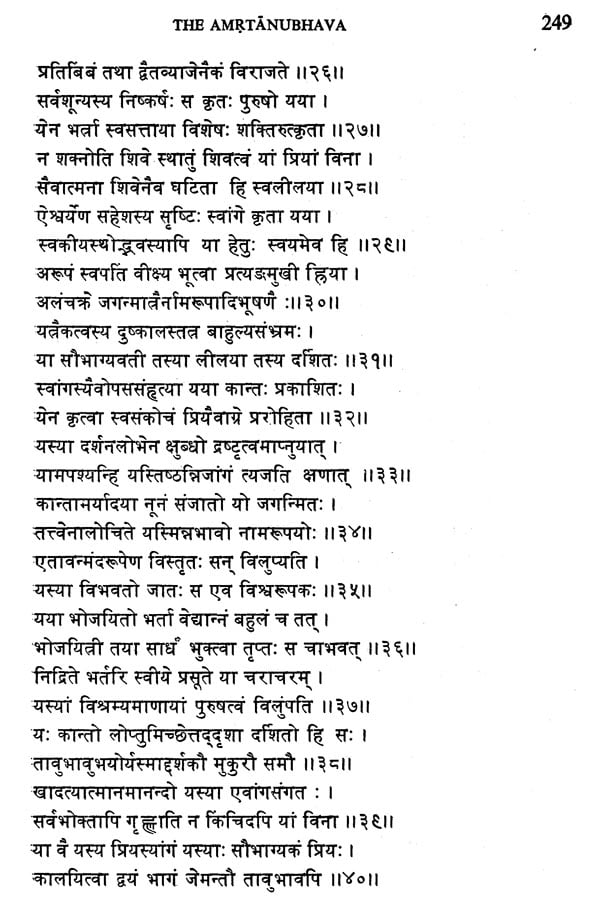 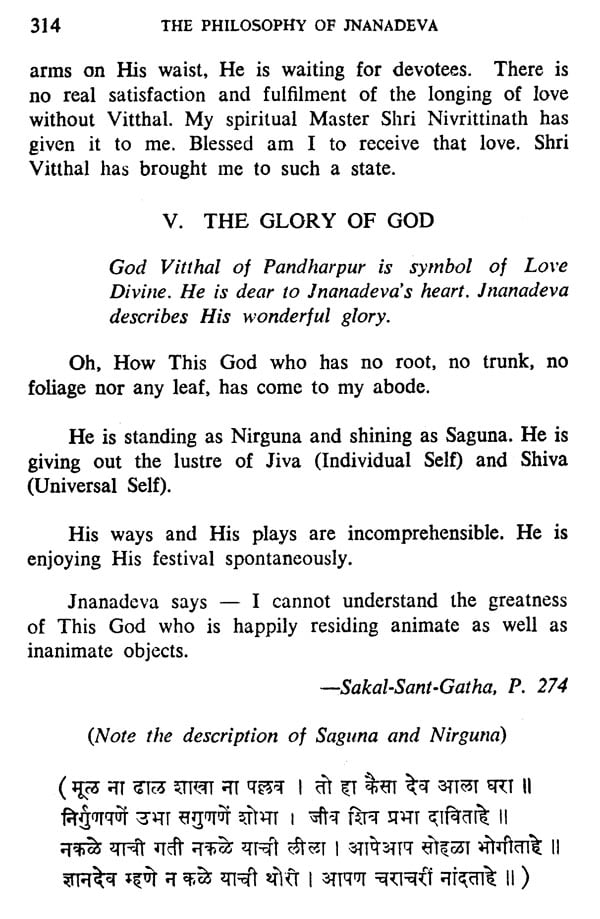 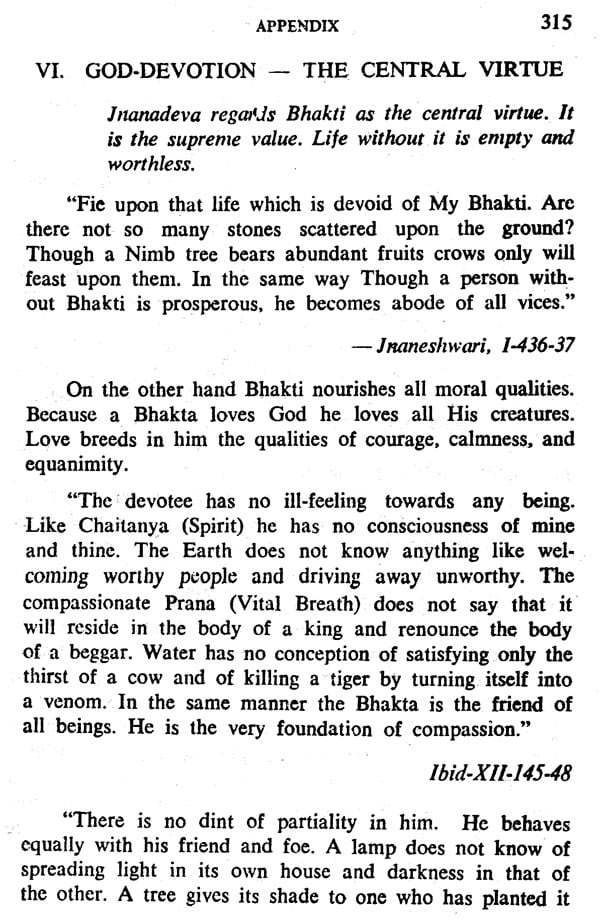 योगवासिष्ठ: The Yogavasistha of Valmiki : With the Commentary Vasistha Maharamayana Tatparyaprakasa (Volume I and II): Sanskrit Only
By Vasudeva Laxmana Sharma Pansikar
$126.40
FREE Delivery
Best Seller
$158  (20% off)