Mahesh Dattani is a well-known Indian director, actor and the first playwright in English to be awarded the Sahitya Akademi award. His highly acclaimed plays include Final Solutions, Dance Like a Man, Bravely Fought the Queen, On a Muggy Night in Mumbai, Tara, Thirty Days in September, and The Murder that Never Was.

Dattani's plays are strongly Indian in flavour and tone which attract the audiences because of their strong emotional appeal. He has presented a large variety of social phenomena we come across in everyday life. He has been quite audacious in staging themes that are considered taboo in our society. However, there is no obscenity or vulgarity in his expression in dealing with sex-related issues. His treatment of the subject is subtle and the dialogues of his characters are catchy.

The book is an anthology of scholarly articles on various aspects of Mahesh Dattani's plays. A representation of subjugation depicted through the conflict of traditional cultural thought in Dattani's plays has been highlighted. Revisiting him, an attempt has also been made to analyze whether economic progress has changed the psychology of womenfolk and the mentality of mankind-a theme on which some of Dattani's plays are based. Some other themes used by Dattani and taken up in the book include emotional, social and moral issues of contemporary society; communal hatred in the fundamentalist society; and crises of urban existence afflicting the upper middle classes. Dattani chooses expressionism to illustrate the continuous struggle of modern Indian society in familial, social, moral and cultural spheres.This has been ably explored in the anthology. It will be useful for the students and teachers of Indian English Literature and researchers in this field.

Vijay Kumar Sharma, a distinguished researcher and teacher, has been teaching English in Delhi University for more than four decades and is Principal of Ram Lal Anand College (University of Delhi). He has been a British Council Visitor to Oxford and Strathclyde Universities (UK) to study cultures of England and Scotland; a Fulbright Scholar at Boston (Massachusetts) and Philadelphia (Pennsylvania); a Post-Doctoral Indo-Shastri Canadian Research Fellow at Carlton University (Ottawa) and the University of Toronto (Toronto); and a Salzburg Seminar Fellow at Salzburg (Austria).

The recipient of several academic grants and awards, V.K. Sharma has co-edited an international journal in Canadian Studies and four books on various scholarly subjects. He has been trained at the CIEFL, Hyderabad in ELT and has been a teacher trainer for more than 25 years. As a resource person in ELT,especially in curriculum design and evaluation, he has also served as the Chairperson of Forum for Teachers of English Language and Literature, and is the Patron of ELTAI, Kanpur Chapter. His academic interests include Indian, American, English, Canadian, and South Asian, North American Literatures,and Gender Studies,Translation andTranslation Studies.

Shyam Samtani taught English Literature for more than four decades. A Visiting Professor in School of Languages, Devi Ahilya University, Indore for more than two decades, Samtani had also been a Resource Person at the Refresher Courses in Indore, Jabalpur and Rewa. He presented papers and chaired various sessions in national and international seminars. He has published more than 35 papers in research journals and books. Having published and travelled widely, Samtani retired as Head and Professor, PG Department of English and Research Centre, Indore Christian College, Indore.

I have often said, on several occasions, that Mahesh and I are like an old married couple in the theatrical space.

We have worked together for over 20 years, have produced 5 plays, vastly varied in theme and form, have made and modified, experimented with and exhumed, altercated about and altered, censored and celebrated, every one of them, from inception to maturity, have learnt how to push and challenge each other, and finally how to extract the best from each other.

By freeing our imaginations and walking on roads less travelled, but especially by putting our egos to one side, we have travelled together.

Of course, the writer and director have to be on the same page (the director has to resonate with the theme and content of the writer's material) but this process of working on a piece of writing together, to create the final product, is a literary process peculiar only to theatre and cinema. It is a co-creation like no other, because it is only in the playing out of the material on stage that the playwright really knows whether his work works!

It may all sound brilliant on paper, but unless the dialogues come 'trippingly on the tongue' they may as well stay on the page. So too the characters. They may sound fascinating to read, but must sparkle with equal richness and complexity when played. The acid test for the playwright is when the play hits the boards!

Some of the most exciting plays have been born out of such collaborations, one of the greatest being that between Elia Kazan and Arthur Miller, who shared the same artistic vision, while holding radically divergent political views. Kazan directed and shaped those legendary plays to become the classics that they are today, whittling and polishing the script till it was at its leanest, potent best.

My theatre company was set up primarily to promote and platform Indian writing in English, to create a body of work that was contemporary and original, so that we could tell our own stories, which were uniquely Indian in spirit, yet moored in a universal context. And also, to then take these productions abroad, and open them up to a global audience to gauge how well they fared on the world stage.

Mahesh's plays are strongly Indian in flavour and tone, but whatever their themes, they always hook an audience because of their strong emotional appeal.

We have performed his plays all over India and across the globe and they have struck a chord with people everywhere, be they about over-the-hill Bharatnatyam dancers (Dance Like a Man with 520 shows and still dancing!) or sexual abuse (30 Days in September that has broken barriers and performed in several repressed socio-cultures across the world) or about ageing Divas-from the world of theatre and the trauma of the subcontinental partition (Where Did I Leave My Purdah?)-to India's first original play on homosexuality (On a Muggy Night in Mumbai). All these productions broke new ground in one way or another.

I think we are both attracted to subjects that delve into socio-cultural issues but that still manage to engage and entertain, (because this is an art form which is not complete unless it is a shared experience with an audience) and the challenge is how to marry these two goals. Over the years this challenge remains, especially in the light of competing with a burgeoning type of theatre that aims largely to entertain and please.

In closing, I need to mention two of his most powerful plays-Tara and Bravely Fought the Queen-which I feel still haven't received their due.

I hope one day to explore and perform both these, but as of now, Mahesh and I are both lost in the rarefied world of Indian classical music and an era gone by, in search of India's first great musical rockstar and her triumphs and travails...the fiery and fabulous Gauhar Jaan, undisputed queen of the Thumri!

T.S. Eliot observes that for as great a writer as Shakespeare it is likely that we may not be right; therefore, let us change our stand of being wrong every time. In other words, there is always some scope for multi-dimensional, myriad-minded interpretation of his works which defies possibilities of concretization of opinions. As a matter of fact, creation and so also the interpretation of a work of art depends on an individual's intuitive perception, his sensibility and susceptibility, the horizons of his education and orientation, the experiences and traumas of life. One just needs to appreciate the perspective of the author which is conditioned and chiselled by the circumstances he is placed in.

India is a vast country with multi-lingual, cultural, religious and regional diversity manifesting itself in literature supposed to be the mirror of the society. Be it a poet, a novelist or a playwright, the medium reflects the patriarchal socio-familial set-up, gender construct, marginalization of women struggling for space, the silenced voice of the subaltern, communal conflicts, rapes and violence, child sex-abuse, drug peddling, fusion of chromosomes resulting into LGBT (lesbian, gay, bisexual, transgender), identity crises, etc. leading to problems like split personality, neurosis, paranoia, mania, phobia and such other obsessive or compulsive disorders. A creative writer, whatever society he lives in, cannot keep his lids down or ears plugged to the surroundings. His instincts impel him to use his medium to express and ventilate his feelings, ire or responses. The purpose may be to serve a clarion call to the dormant consciousness or jolt the complacent social apathy.

Mahesh Dattani, one of the most prolific of the contemporary playwrights, has looked around with woken eyes and presented a large variety of social phenomena one is confronted with in everyday walk of life. One needs the courage of conviction, ability to array thoughts in communicative idiom, vision to create living characters, vibrant dynamics of theatre, including the stagecraft, multi-levelled stage, acoustics, light dimmer/reflectors and props. Let alone the theatrical skills, Mahesh Dattani is a trained classical dancer; he has an ear for music too. His plays have created both ripples and rapids in the world of theatre, not only in India but also abroad. With his second play, Dance Like a Man, Dattani shot into what can possibly be termed as blazing fame. Erin Mee, the celebrated theatre director, who is associated with the Department of Theatre in New York University, included Dattani's play, Tara, in her syllabus for a class on Indian Performance. Mahesh Dattani, winner of the pestigious Sahitya Akademi Award has never looked back. In fact, he has carved for himself a place in the history of Indian English Drama.

Dattani has been fairly audacious in staging themes which are considered taboo in the social structure. One can deal with such themes in a novel, which is supposed to have a wide canvass and can be read in an easy armchair inside a secluded room; but to present such issues, which implicate the law of the land, on the stage needs the iron nerves and sinews of a Dattani. There is neither any obscenity nor vulgarity in expression characteristic of a red light area while dealing with sex-related issues. Dattani's treatment is subtle and dialogues of his characters catchy.

In some of his plays such as Where Did I Leave My Purdah?, Dattani advocates the cause of the theatre, in which the protagonist prefers the theatre to films: "Your cinema is too small for me.... Only theatre deserves me." His latest play, The Big Fat City, boxes multiple themes which beget one another like the medieval cycles of stories. The audience, so also the reader, marvels at such ingenuity of the author. We are indeed grateful to Mahesh Dattani for providing us the manuscripts of his then unpublished plays, Where Did I Leave My Purdah? and The Big Fat City. This enabled us to get papers from scholars on these plays. He has been helpful in other matters too.

We express our gratitude to Ms. Lillete Dubey for embellishing this volume by writing the Foreword. We thank the contributors for their papers without which the book could not have seen the light of the day. We owe thanks to Atlantic Publishers also for printing this volume. We sincerely hope that it would help the students in their academic pursuits. 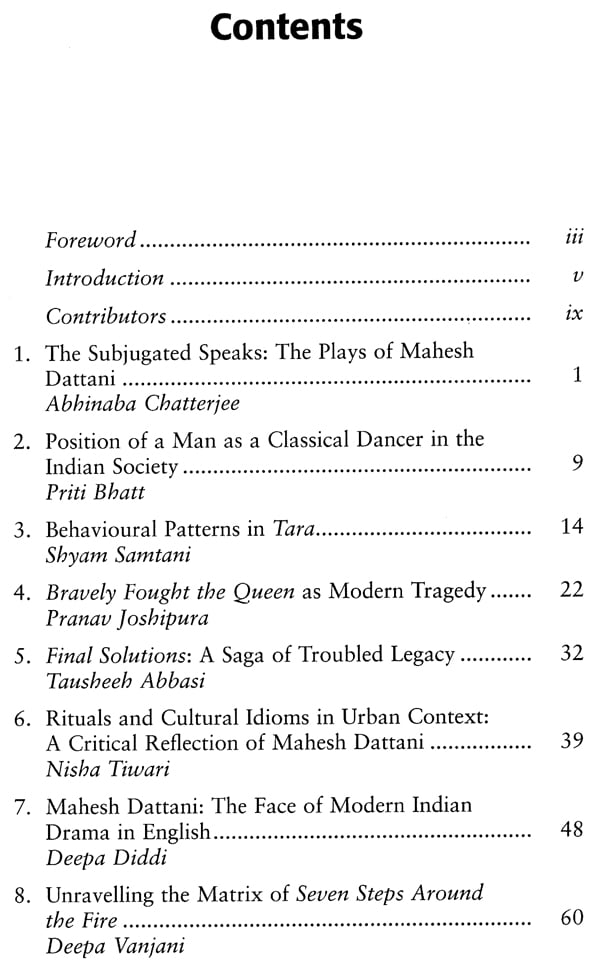 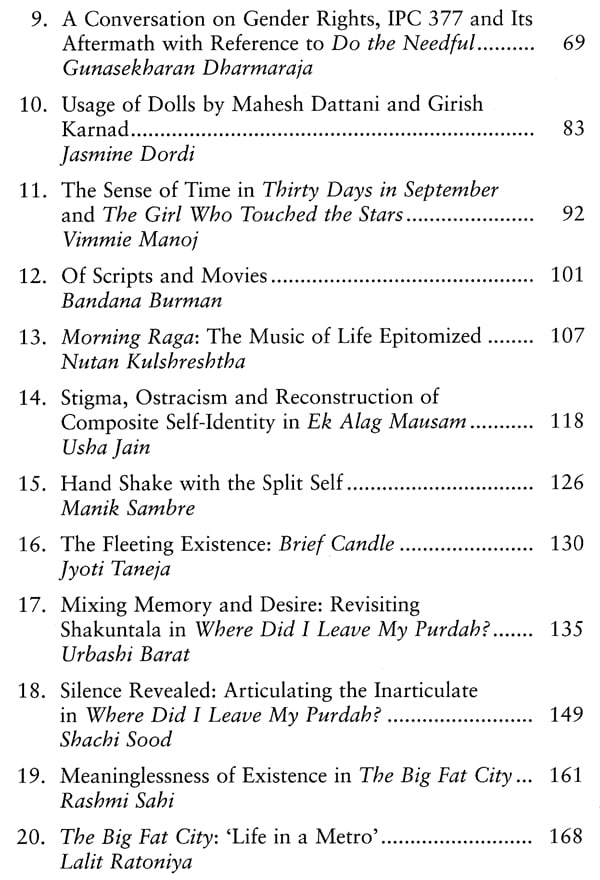 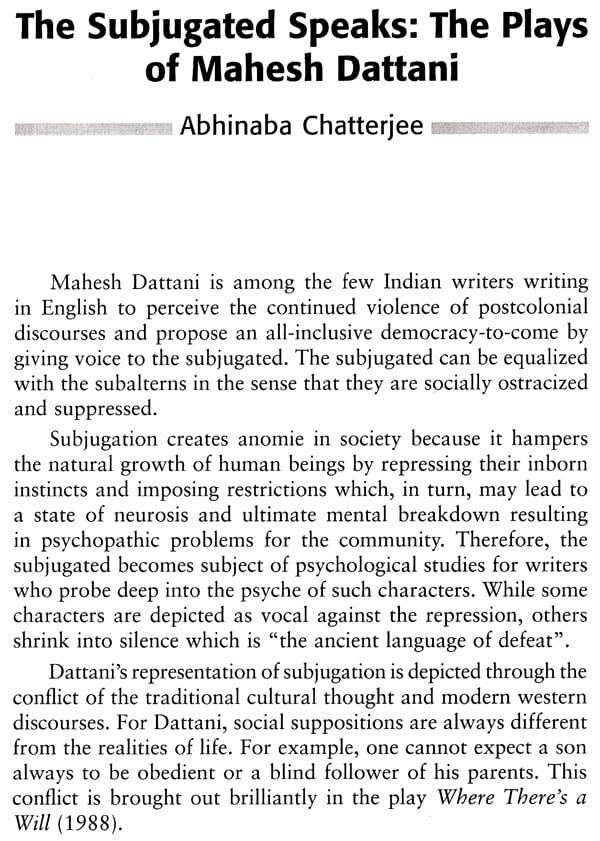 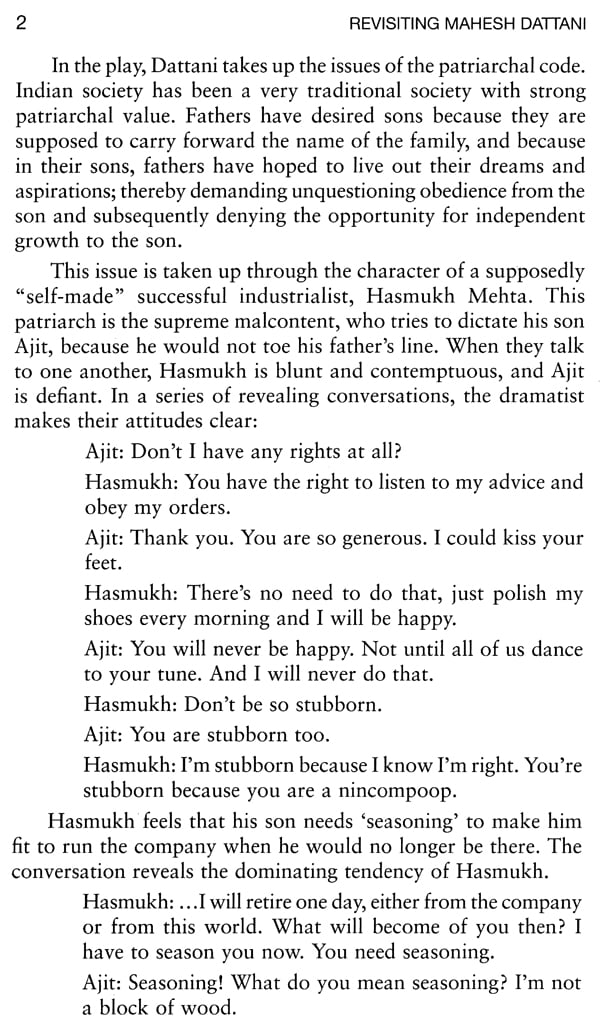 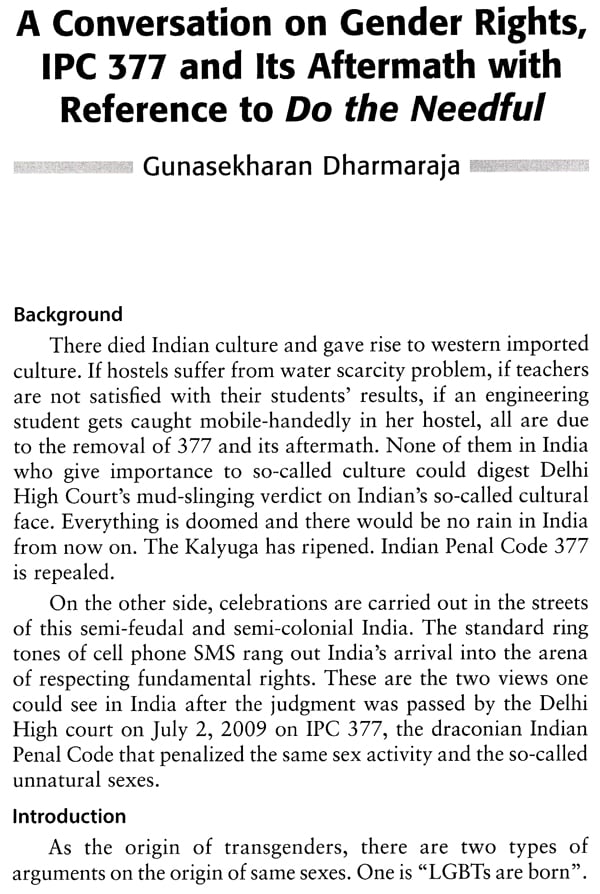 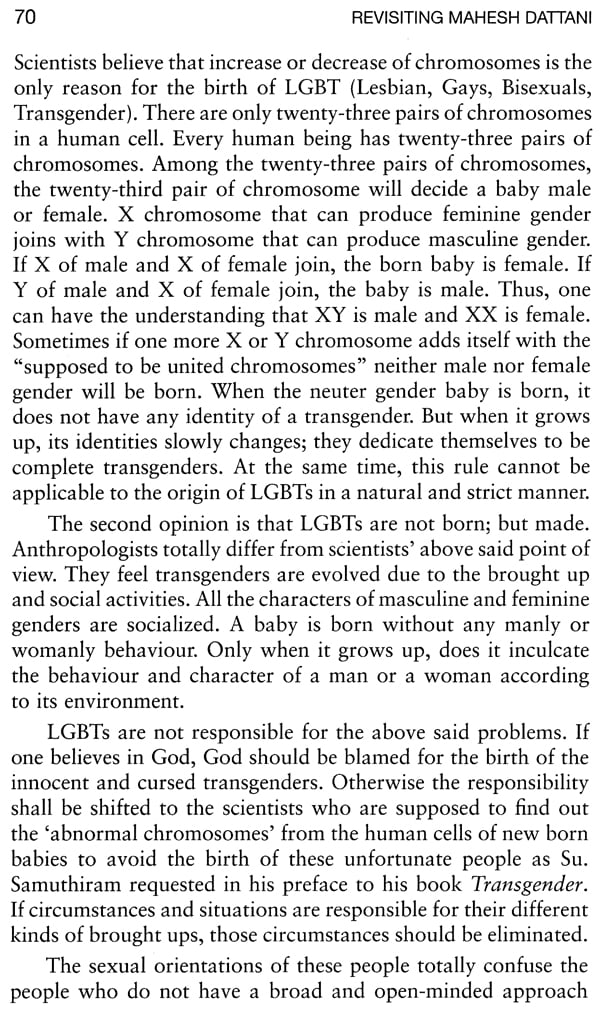 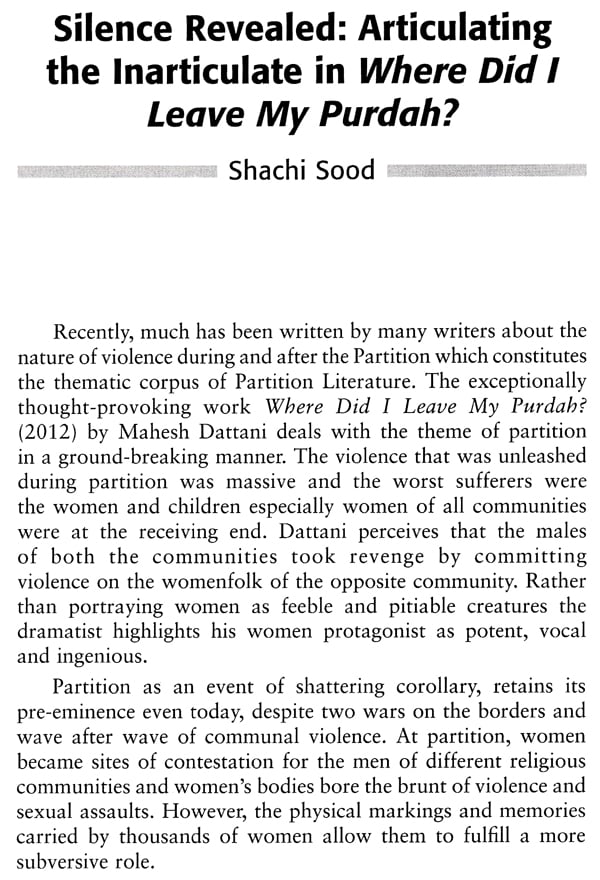 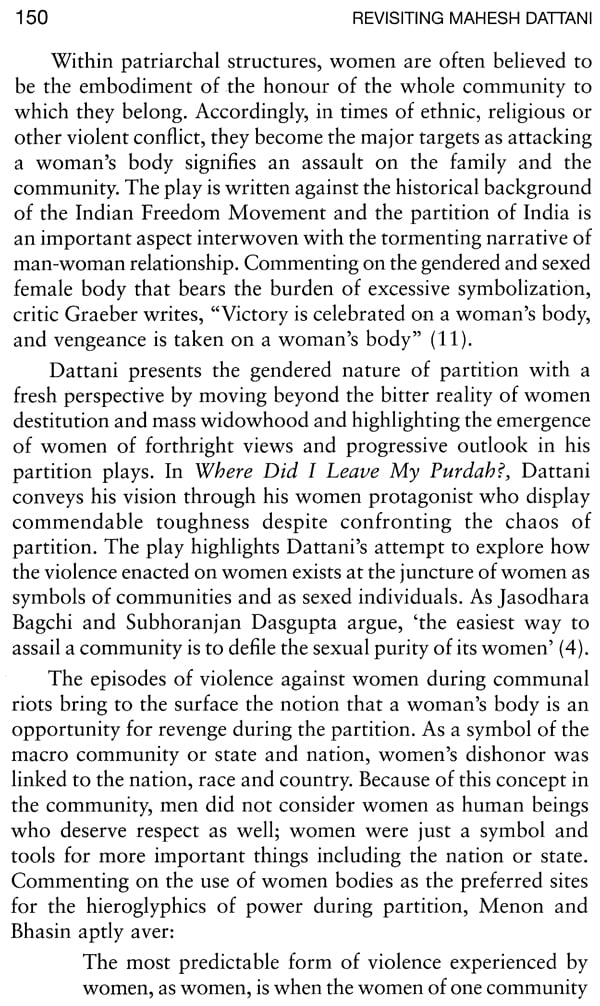