Salman Rushdie, one of the progenitors of the worldwide controversies till date, occupies a coveted place in the galaxy of post-colonial authors. His literary expedition spans overmore than four decades right from his debut novel, Grimus (1975) to the latest, Two Years Eight Months and Twenty Eight Nights (2015). Rushdie adroitly situates postcolonial impressions of the Indian subcontinent in his creative articulations and beautifully paints the canvas of fiction with multiple hues of ethnicity, Muslim imperialism, and historical blend in the post-independence politics of India. The novels of Salman Rushdie are the true representatives of postcolonial fiction. He embodies in his own life and in his writings the conundrums of the postcolonial author, writing within the traditions of Indian writing in English while concurrently appealing to the conventions and tastes globally, especially to the Western readers.

The present volume offers fresh perspectives on Salman Rushdie that contains seventeen critical essays which traverse through his literary taxonomy and bring out an incisive criticism. Papers in the present volume contemplate profoundly upon his fiction within the theoretical rubrics of ‘post-colonialism; ‘orientalism, ‘gender theory’ ‘diaspora, and ‘identity’ Each of the essays closely scrutinizes and puts forth the insights of multiple themes which Rushdie adeptly deals with. The volume strives to find how Rushdie is germane in the twenty first century politics of globalization, literary schema, and cosmopolitanism. The younger and the unheard voices, budding scholars from India, candidly posit their views on Rushdie’s assorted works in the present book. All the essays collectively corroborate that Rushdie’s works are difficult to study without supportive criticism. Hence, this anthology!

Ajay K Chaubey, PhD, is an Assistant Professor of English at the Dept. of Sciences & Humanities, National Institute of Technology, Uttarakhand, India. His key publications include V.S. Naipaul (Atlantic,2015) followed by South Asian Diaspora (in three volumes) to be released by Rawat Publications, Jaipur by the end of this year. Dr. Chaubey has visited and participated in conferences and symposium held at Nottingham Trent University, University of Leicester and York St. John University, York (UK) during June 2014. His research papers have appeared in the journals of international repute including Critical Practice, UML, Journal of AESI, Creative Forum, Littcrit, and Asian Journal of Literature, Culture and Society, published by Assumption University, Thailand.

Janmejay K Tiwari holds PhD degree on Salman Rushdie from the University of Allahabad. Currently, he is working as a freelance academician based in New Delhi.

Bishun Kumar, PhD, teaches at the Department of English, Babu Banarasi Das University, Lucknow with a Doctoral degree on Mulk Raj Anand, from University of Lucknow. Besides the present anthology, he has also edited Major Voices in New Literatures in English (Atlantic, 2015) and Mahesh Dattani: Themes, Techniques and Issues (Atlantic, 2015). Additionally, Dr. Kumar has co-edited (with Dr. Ajay K Chaubey) Transnational Passages: An Anthology of Diaspora Criticism Vol.| and Discursive Passages: An Anthology of Diaspora Criticism Vol. Il (Yking Books, 2015). He is also an Assistant Editor of The SPIEL: Journal of English Studies and has published many research papers and critical essays of the diverse fields in different reputed International Journals and anthologies.

Bill Ashcroft, Gareth Griffiths, and Helen Tiffin borrowed the title of their influential 1989 work of postcolonial theory, The Empire Writes Back, from an essay of Salman Rushdie. More than Walcott, Coetzee, Achebe, or Soyinka or any other candidate for the honour, Rushdie was hailed as the epitome of the literary postcolonial and his 1981 novel Midnight’s Children as the quintessential postcolonial novel. However, no sooner did he put himself at the masthead of a literary and critical movement that sought to reverse the relations of imperial centre and periphery than Rushdie acquired a host of other, seemingly very different meanings. 1989 was also the year the Ayatollah Khomeini declared, in a fatwa, a death sentence against him as. the author of blasphemous novel, The Satanic Verses. Rushdie has since been commonly regarded as the spokesperson for Western secularism against religious intolerance, especially Muslim religious intolerance.

The Bombay-born Cambridge-educated author has never been content to rest within a single self-definition: the Indian became British became American in a progress that he made seem inevitable. The author of the postcolonial masterpiece Midnight’s Children became the author of the great novel of the immigrant experience in Britain, The Satanic Verses, and later of a novel of globalization, The Ground Beneath Her Feet, that folded India into a much larger contemporary world. Later still, he became the author of a New York novel, Fury, explicitly indebted to Saul Bellow and Ralph Ellison. The recent Two Years Eight Months and Twenty-Eight Days has left India far behind. The erstwhile prophet of post-colonialism has become identified with diaspora, transnationalism, or cosmopolitanism.

Part of Rushdie’s restlessness can be attributed to his creativity: he has always sought new subject matter and new ways to transgress. Arguably, however, his protean versatility has not represented a journey so much as the nature of Rushdie’s character already present at the beginning of his career. His novels have constantly returned to the same themes, tropes, and structural features. The violent alter ego bent on revenge who threatens the flawed hero appears in every novel, from Midnight’s Children through Shalimar the Clown. So does the question of how a new idea passes from the text into the world: the Prophet in The Satanic Verses had one answer, Rushdie himself another. The struggle of the forces of openness and tolerance against those of narrow intolerance, of the Many against the One, has always been a concern. So is the relation of ideas, including religious ideas, to the material world. And the relation of the part to the whole has been the constant theme of the man who imagined his own circumstances as somehow linked to the nation-state and to the world. A Rushdie novel, however different from every other, is unmistakably a Rushdie novel. Arguably what is truest about Rushdie therefore is his consistency. The post-colonialist was always also diasporan and cosmopolitan. After all, the author of Midnight’s Children could only write that novel because he stood outside India and envisaged it as a whole in a way that no one within India could. He modeled his novel of India on Gunter Grass’s postmodern classic The Tin Drum—to the point where the chapters of the two books can almost be mapped against each other. In other words, Rushdie was always already a world author, even when he was the most identified with a national literature.

Some may feel, however, that Rushdie’s great restlessness has worked against his creativity. Everything he has written since Midnight’s Children can sometimes appear, if not a falling off, then a series of extrapolating sequels. Indian literature cannot be imagined without Rushdie, but he will never be an essential novelist of New York. The great master of the new and the surprising can seem all too predictable, a fate that echoes what has happened to postmodernism more generally. It therefore feels right that this collection of critical articles devoted to Rushdie should take as its twin foci Midnight’s Children and the author’s entire literary output: the most significant part is a synecdoche of the whole; the whole is a working out of what was already present in the part. 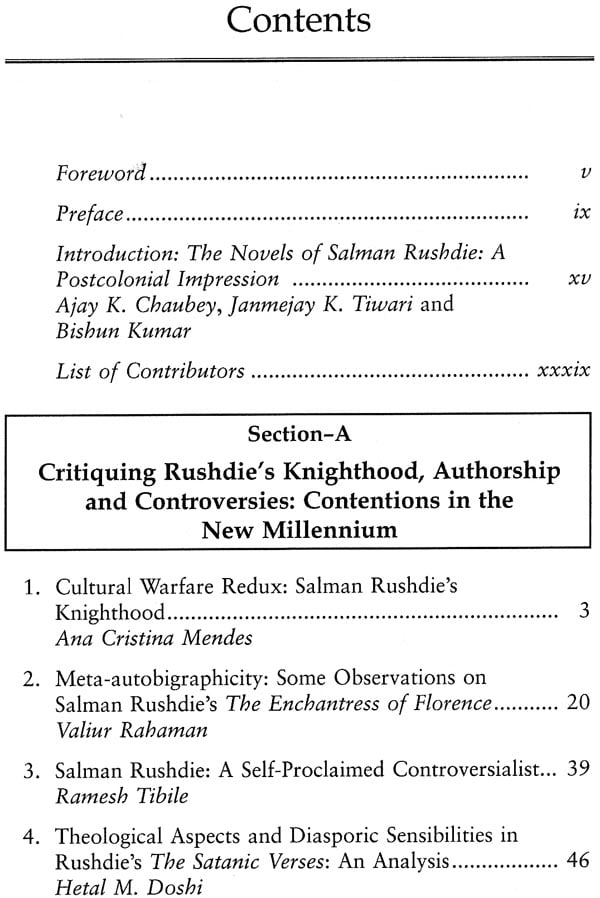 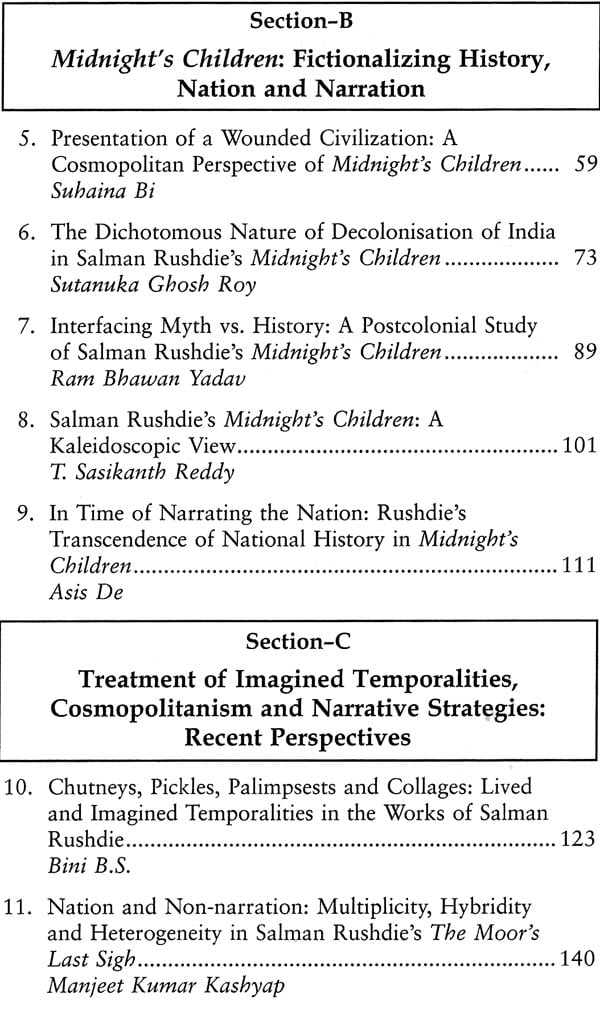 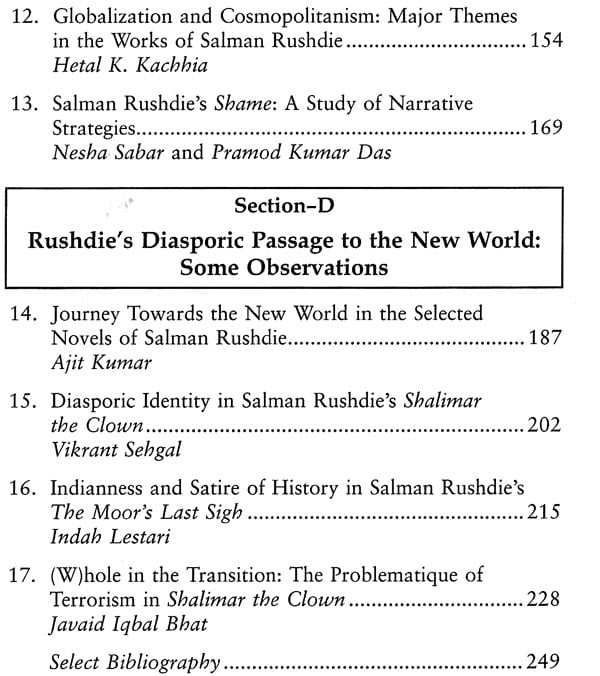 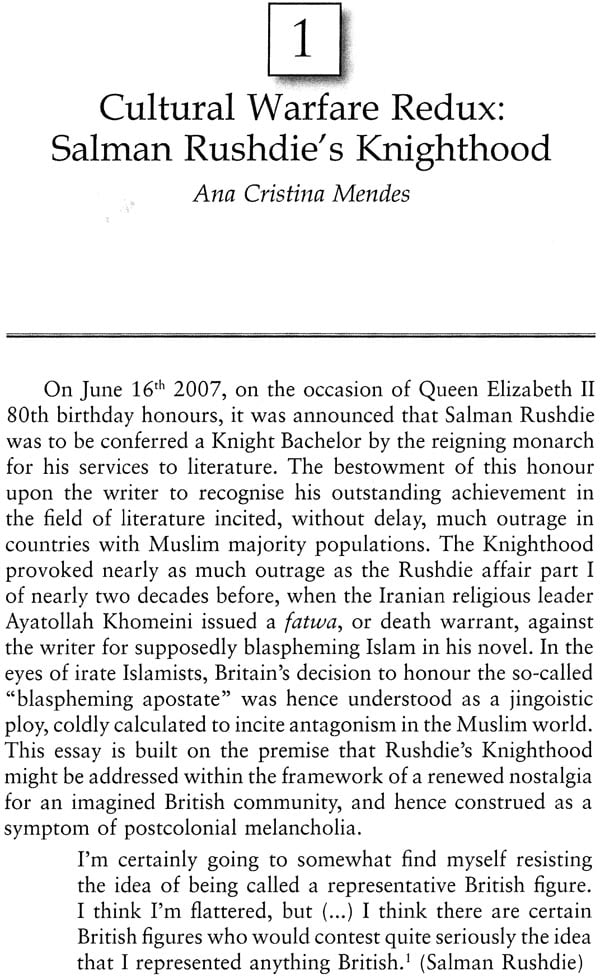 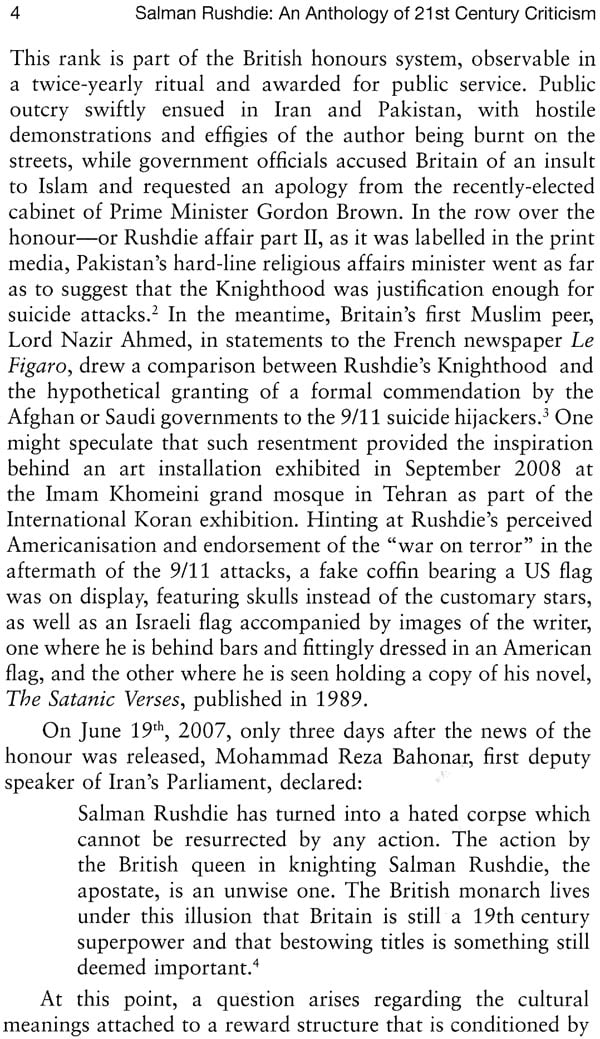 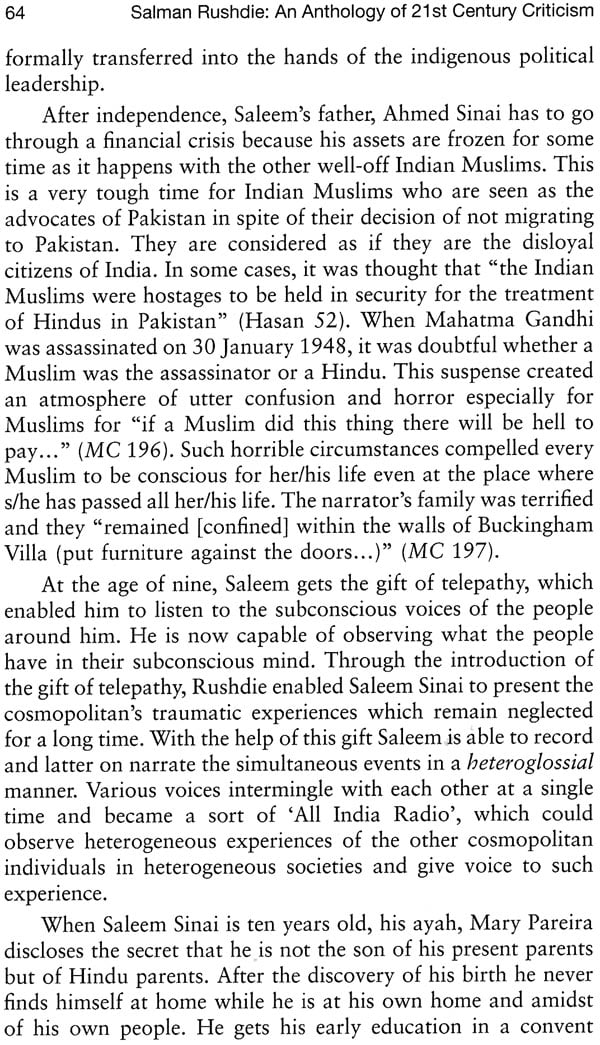 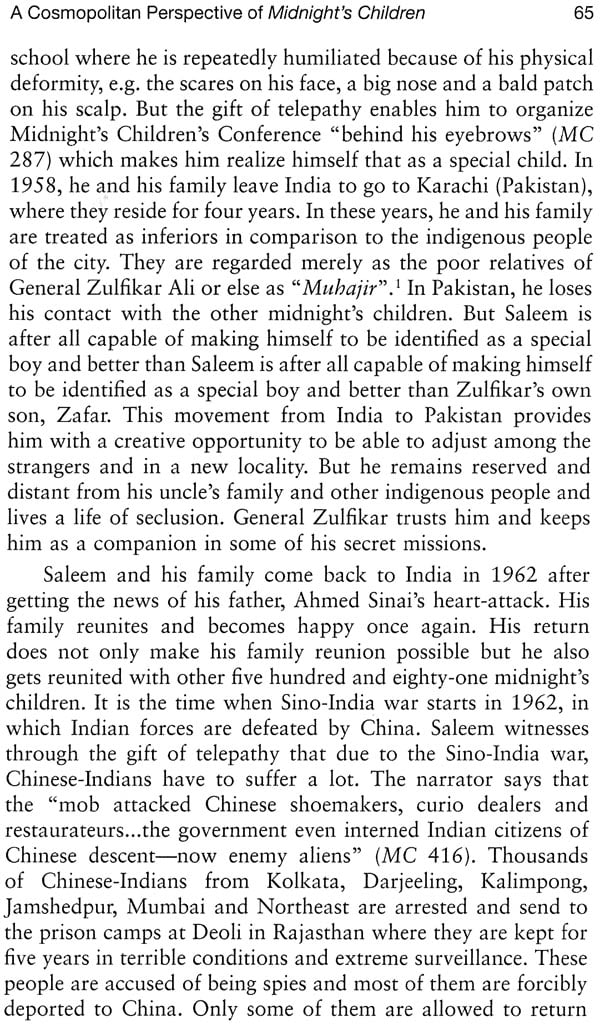 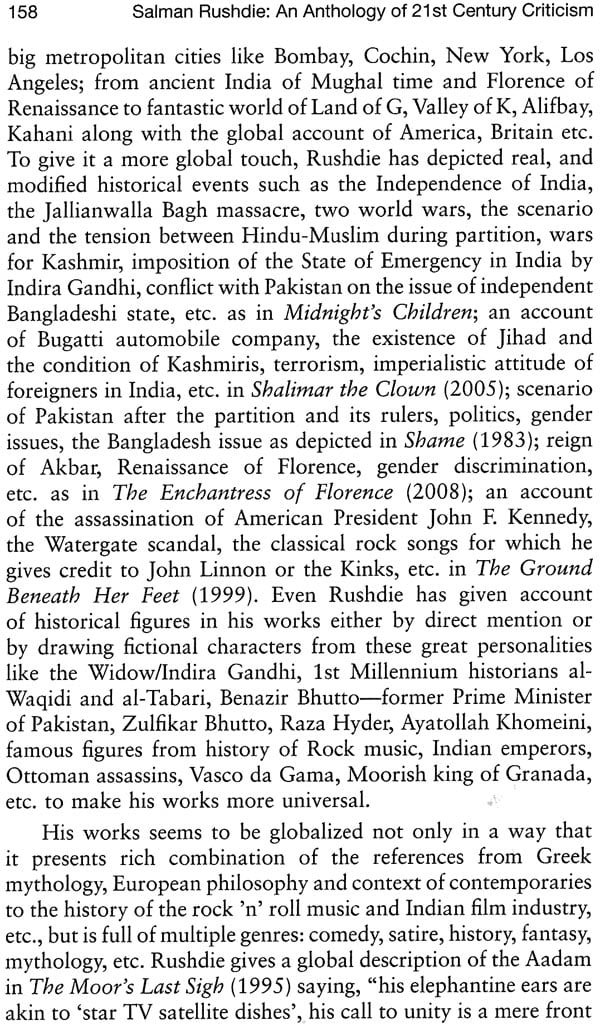 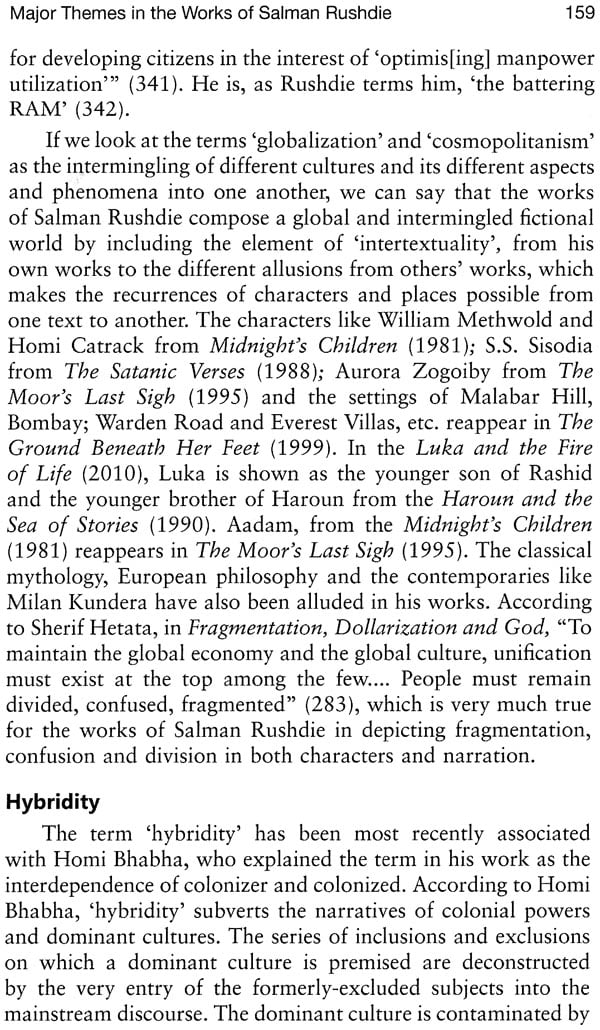 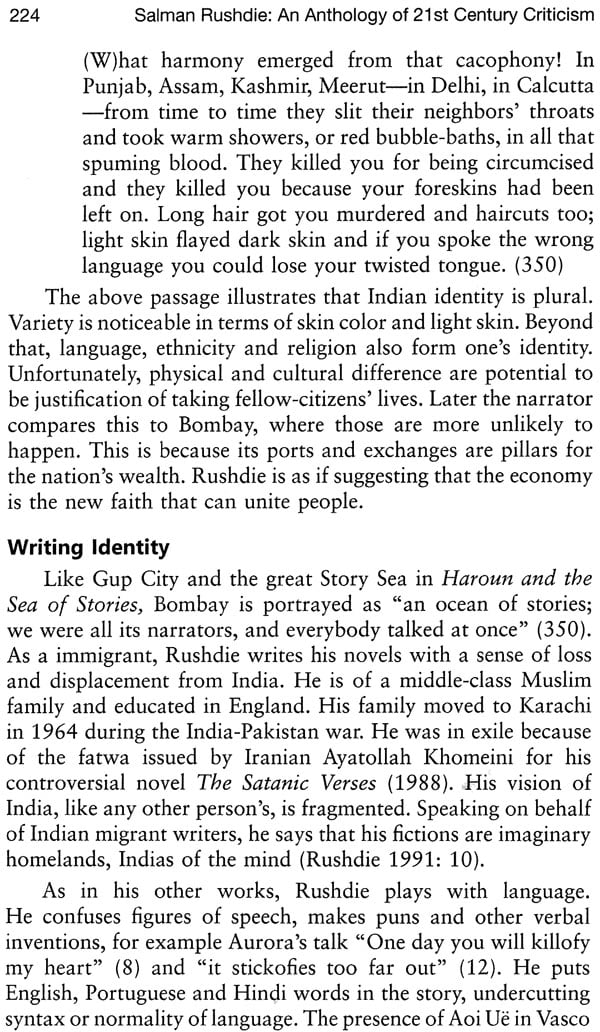 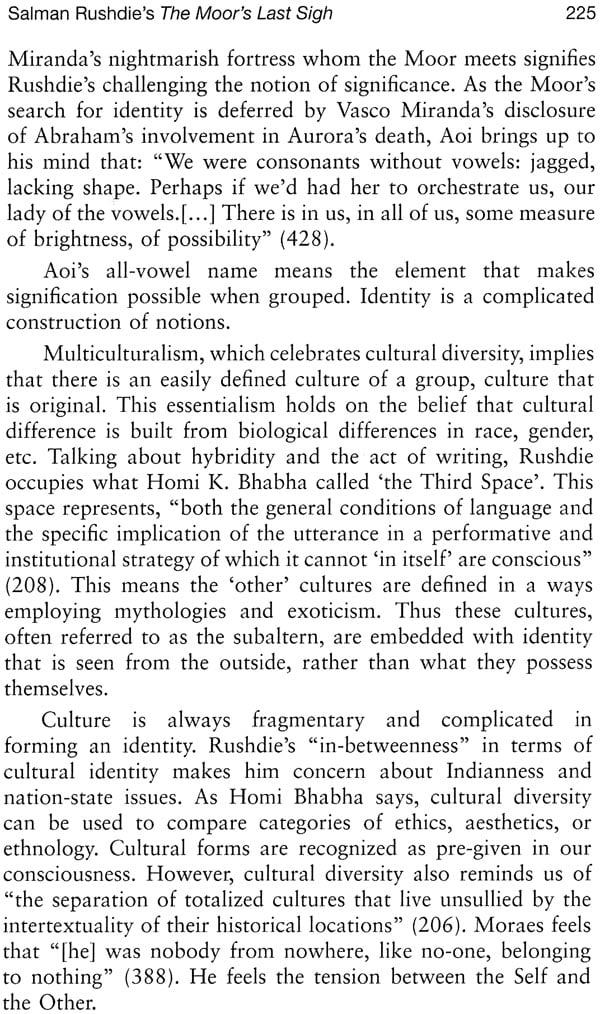 In Stereotype (South Asia in the Global Literary Imaginary)
By Mrinalini Chakravorty
$44.10
FREE Delivery
$49  (10% off)