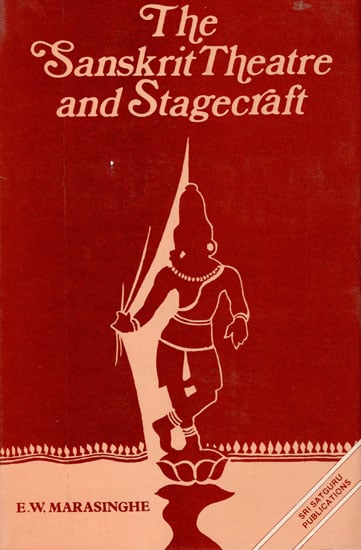 This is the most comprehensive study done in recent years on the stagecraft of the ancient Indian theatre. Admirably written with a living theatre in mind, the work in its fourteen chapters unfolds the mysteries of Sanskrit theatre production with particular emphasis on the playhouse, the role of the curtain, the dramatic preliminaries, the employment of music, character-types, historic art, theatrical techniques and extraneous representation, all of which have received but scant attention of scholars of Sanskrit drama but so vitally important to a proper understanding of the way in which Sanskrit plays took physical shape on the stage. Chapter 13 is devoted to a detailed discussion on the different theatrical genres with a clear distinction drawn between rilpaka and upargpaka forms.

The author dispels the fallacy that the Sanskrit theatre catered to the nobility and the literati alone and remained from the very beginning monopoly of the royal court. The reader will soon realize that Sanskrit plays, despite royal patronage, served as a form of popular entertainment throughout its long history from about the dawn of the Christian era at least up to the close of the first millennium. Its emphasis on the theatrical aspects of Sanskrit drama makes this book much different from what has hitherto been written and published about this most intriguing theatre.

E. W. Marasinghe holds a First Class Honours degree in Sanskrit from the University of London and a Ph. D. from the University of Calcutta. Presently he is Senior Assistant Librarian of the University of Peradeniya, Sri Lanka. The present work embodies the results of four years of research conducted by the author at the University of Calcutta for his doctoral thesis, as a Research Fellow under the Commonwealth Scholarships/Fellowships Programme. Besides Sanskrit theatre, his main fields of interest are Indian classical music and supasastras. His next major research constitutes the editing and translating into English of a unique Sanskrit apa text discovered some years ago in Central Sri Lanka. This work entitled Wistuvidytdastra and ascribed to Bodhisattva Malijusri exclusively deals with Mahayana monastic architecture of ancient Sri Lanka and is due to be released shortly in Bibliotheca Indo-BUDDHICA SERIES.

This book is based on a thesis submitted by the present writer for the Doctor of Philosophy degree of the Calcutta University in 1971. It has since been revised and updated in the light of recent research in the field of Sanskrit drama, but the views expressed and the conclusions arrived at in the original work remain substantially the same. The scope of the work has been restricted to the theatrical aspects of the classical drama of ancient India during the first millennium of the Christian era. The beginnings and the development of the Sanskrit drama are still veiled in mystery and the body of extant dramatic literature represents only its culmination and decline. The most noteworthy feature of this 'decline' is that the plays began to be less and less theatrically effective and more and more poetically precious, a tendency that developed in the neighborhood of the tenth century A.D., perhaps even earlier. Apart from this unhealthy development, there is practically nothing to tell us about any changes that the theatre-production underwent during this decadent period. No attempt has, therefore, been made in this work to make a historical survey of the development and the decline of the ancient Indian theatre; instead it will Endeavour to present a reliable picture of the manner in which plays were actually presented on the stage in the hey-day of the Sanskrit theatre.

Among the ancient authorities on Sanskrit dramaturgy Bharata and Abhinavagupta are the only two writers who have taken some pains to document the theatrical details pertaining to drama. Among the rest there is hardly any-one who has evinced an awareness of the existence of a living theatrical tradition. Perhaps the Niityadorpava authors, Ramacandra and Gunacandra, are an exception, but the Niityadarpava does not really deal with theatrical details as such. The others among whom Dhanafijaya, Vgvanatha, Sagaranandin and Singhabhupala are the foremost, seem to have been content with repeating what their respective schools taught about the dramatic theory. Even the several standard commentaries on Sanskrit plays are not of much help to us. They have been written with the reading public in mind, and if any theatrical details are discussed in them, it has been done so only casually. This is understandable because the commentaries came to be written at a time when the Sanskrit drama as a practiced art had ceased to exist, and so, was being studied and appreciated merely as literary works.

The appearance of A.B. Keith's scholarly work, The Sanskrit Drama, is a significant landmark in the history of researches in the field of Sanskrit theatre, and it remains up to this day the most authoritative book written in the present century on the Sanskrit dramatic literature. It discusses at length the origin of the Sanskrit drama, deals authorwise with the whole history of the dramatic literature from Mvaghosa downwards, with a discussion on the date of the author, an interesting narrative of the plot of each play, a critical essay on the dramatist's art and style. the language and the metres, and gives a concise but comprehensive account of the Sanskrit dramatic theory as enunciated by Bharata and his successor, but theatre production has been dismissed in a few cursory pages. The great Indologist Sylvain Levi's Le Thecitre indien, Professor Konow's Das indische Drama and H.H. Wilson's The Theatre of the Hindus are the earliest of modern works on the Sanskrit drama, and a great deal of new facts and information about this bygone theatre has come to light since their appearance. The Sanskrit Drama-Its Origin and Decline by I. Shekar makes no attempt to investigate into the theatrical aspects of the drama. C.B. Gupta's thesis, The Indian Theatre, devoted to a study of the presentation of Sanskrit drama, is an essential departure from these works. His attempt is indeed praiseworthy but the results fall far short of our expectation. The different aspects of the Sanskrit theatre have been briefly dealt with in a haphazard manner and the most important topics, the theatrical technique and the histrionic representation, have been left un-touched. Dr. S.N. Shastri's The Laws and Practice of Sanskrit Drama, the first volume of an ambitious project, is nothing but an exposition in English of the Sanskrit dramatic theory as enunciated by the ancient authorities, and therefore, is of little service to the student of Sanskrit theatre. Henry W. Wells' The Classical Drama of India is a readable book written with a living theatre in mind and mainly intended for the Western reader. The chapter on theatrical technique is admirable indeed. But the work based only on a few well-known plays is not an exhaustive study and does not discuss any point in a critical manner.

It is gratifying to note that there has beer, in recent years, a growing interest among Indologists, particularly in India, in the study of theatrical technique and stagecraft of the Sanskrit theatre. Thanks to the unceasing labours of a few devoted scholars during the past two or three decades, a flood of light has been thrown on many obscure technical details relating to the production of Sanskrit plays, and the several seminars and conferences held under the auspices of such organizations as the Sangeet Natak Akademi, New Delhi, the Madras Music Academy and the Sanaskrta Ranga of Madras have contributed much towards creating a new awareness among theatre enthusiasts throughout the world of the great potentialities of the Sanskrit theatre. Among the few great savants who have rendered distinguished services in the field of Sanskrit drama, the late V. Raghavan deserves special mention. Apart from his long association with the above-mentioned cultural organizations, he conducted extensive research on the Sanskrit drama with particular emphasis on its presentational aspects such as the employment of music, the actor's technique and the technique of the dramatist. His numerous papers on the subjects of dance, drama and music published in various research journals are of invaluable help to the student of Sanskrit theatre. No less significant are his contributions to the studies of the Natakalaksa-naratnako,sa and his scholarly interpretation of the in his monumental thesis, Bhoja's grhgdraprakas'a. Notwithstanding these valuable contributions of the modern scholarship to the study of Sanskrit theatre, an integrated work dealing with all aspects of the production of Sanskrit plays has been a desideratum and it is with the object of fulfilling this need that this work was undertaken by the present writer some twenty years ago.

Most of the conclusions that have been arrived at in this thesis are based on the authority of the Ncilya,s'astra of Bharata and the Abhinarabharati, its great commentary by Abhinavagupta. The former is a unique work which has no parallel in any dramaturgic literature in the ancient world. It deals with all the thinkable aspects of drama, theoretical as well as theatrical, but its treatment of the subject of theatrical presentation has not been done in a methodical way. Some of the very important stage conventions have not been mentioned in the work perhaps because by Bharata's time they had become established requiring no documentation, and whatever has been subjected to discussion lies diffused in a wide range of chapters. And the few MSS, that have come to light are not free from interpolations, lacunae and scribal errors. The habit of studying these comprehensive and highly integrated works piecemeal for immediate purposes has been responsible for leading many scholars astray. In this monograph these two works have been subjected to a thorough and critical study bringing to light many details pertaining to the presenta-tion of Sanskrit plays. The other works on dramaturgy, since they do not show any originality of appreciable worth and are posterior to all the dramatic compositions of outstanding merit, have been studied only in the light of the Niityas'eistra. There is no doubt that plays written ever since the Arcitya.s'ilstra was com-posed were cast, by and large, in the same mould conditioned in that work. But there are several conventions and artifices that seem to have laterly developed and they have been discussed in this book in their proper contexts.

While going through the pages of this book the reader will notice that there are no pettifogging arguments on theoretical details that have suffered much torture at the hands of scholars, both ancient and modern. Theoretical details have been touched upon only in cases where they are perceptibly related to the actual presentation of plays. All theatrical technicalities discussed here have been illustrated with copious examples picked out from a wide selection of pays. However, special attention has been paid to those works that are better known and easily available to the reader. The origin and the development of the Sanskrit drama, a subject on which much has been written and many theories propounded, does not fall within the purview of the present work. It opens with a brief note on the meaning of natya, followed by a discussion on how far the Sanskrit drama deserved to be called a form of popular entertainment. It has been shown that there is no truth in the popular notion that it could never free itself from the tyrannical monopoly of the royal court. All available evidences have been adduced to establish that the Sanskrit drama did enjoy the rights and privileges of a people's theatre.

Chapter 3 is devoted to a discussion on the different classes of theatrical figures, namely, the actors, the musicians, the director and his assistants and, the last but not the least, the audience. 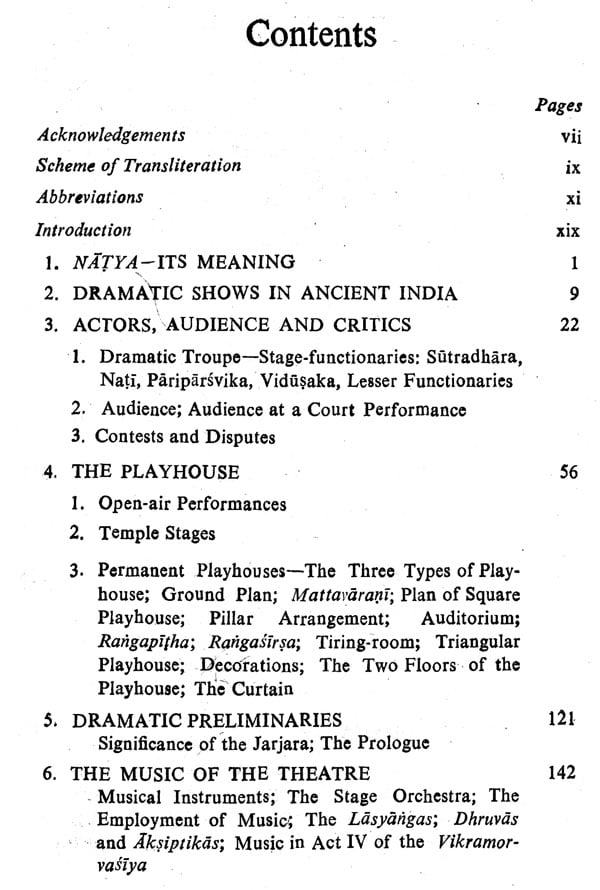 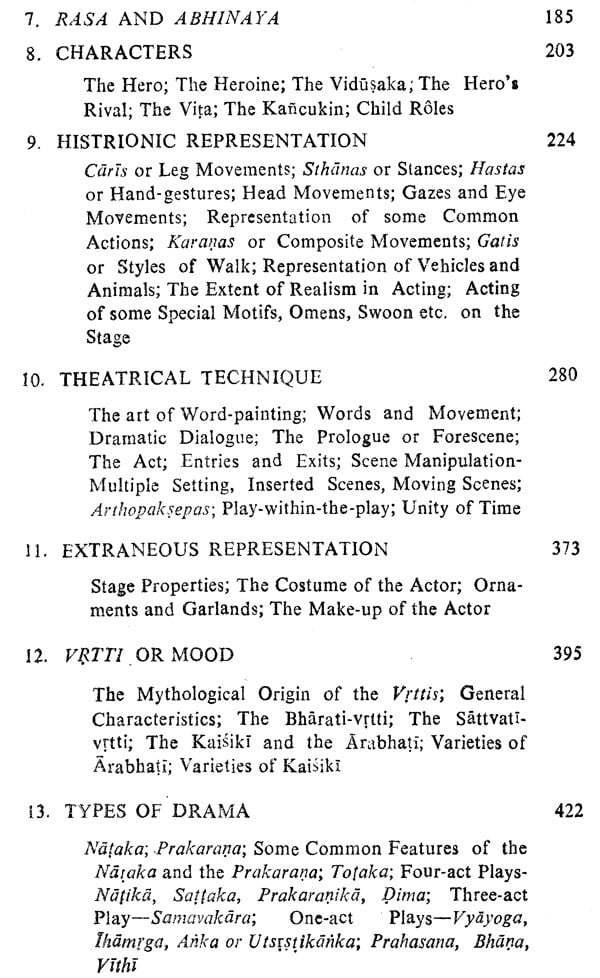 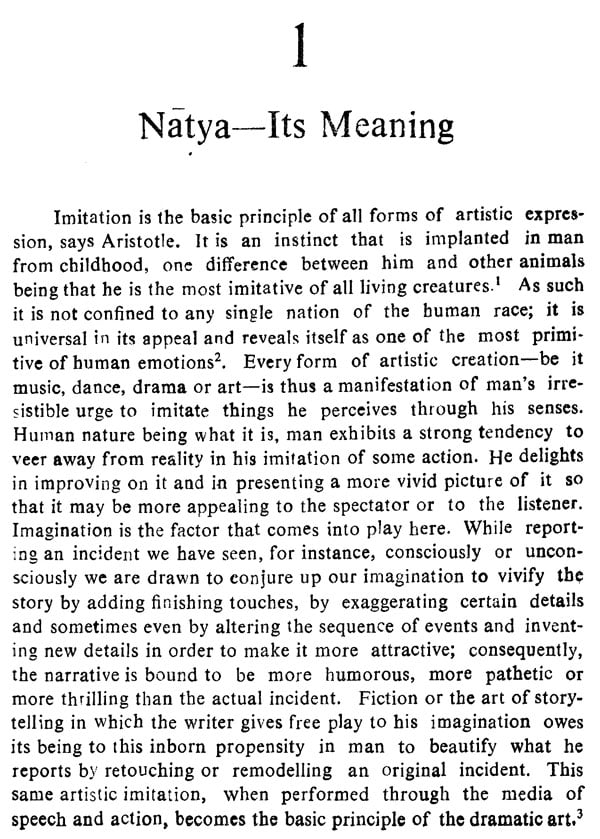 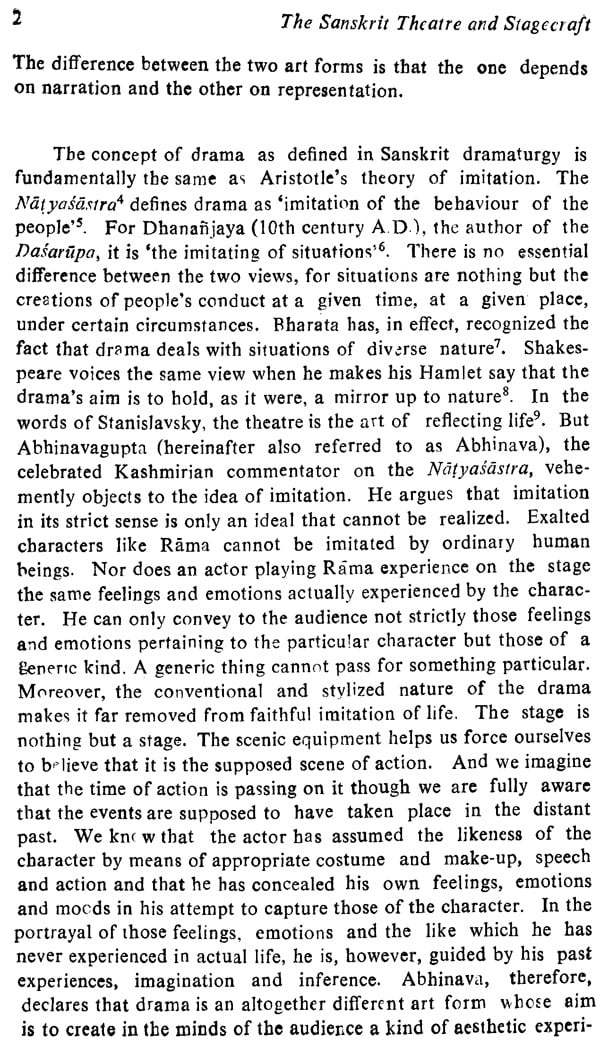 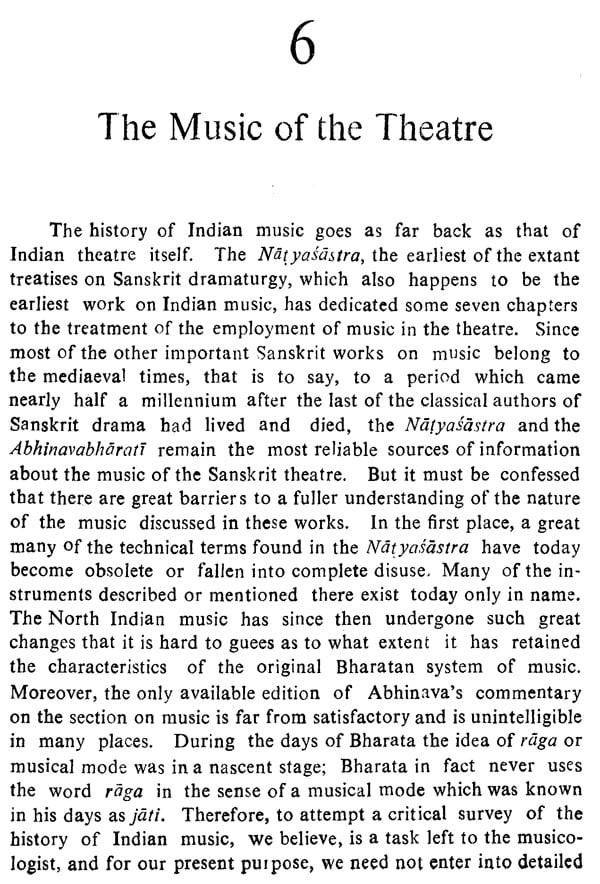 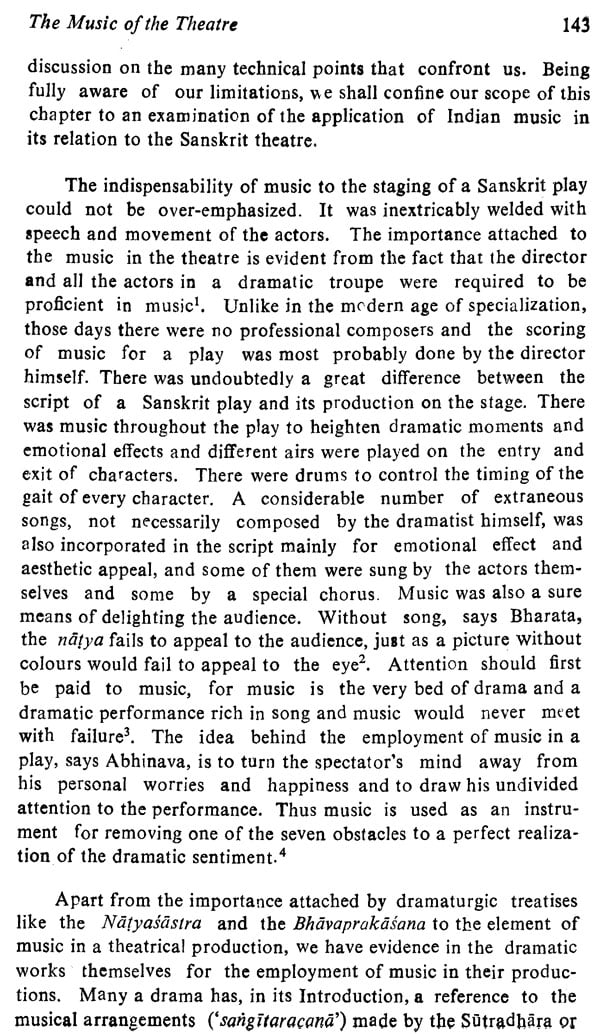 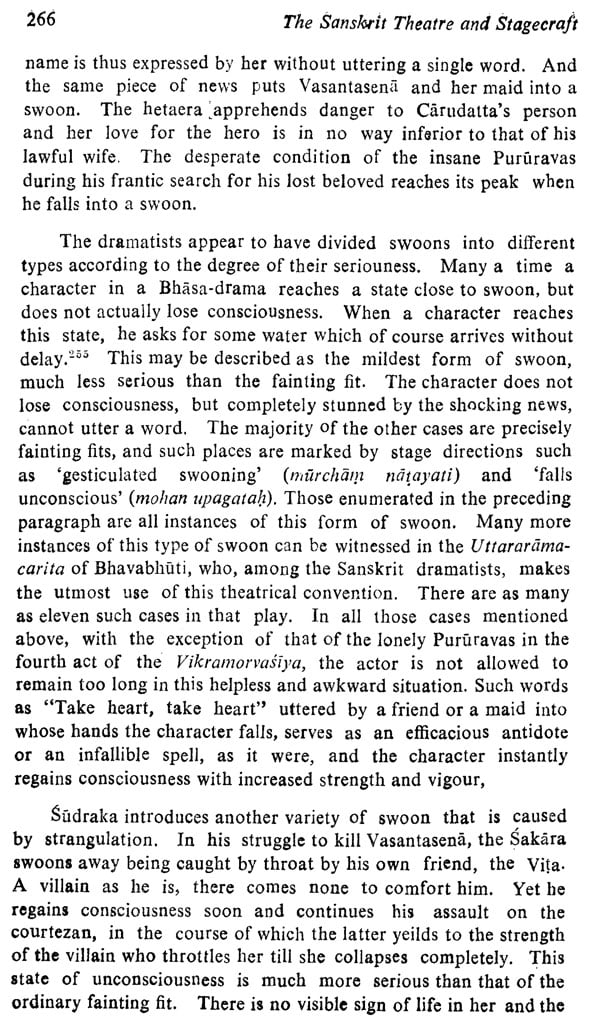 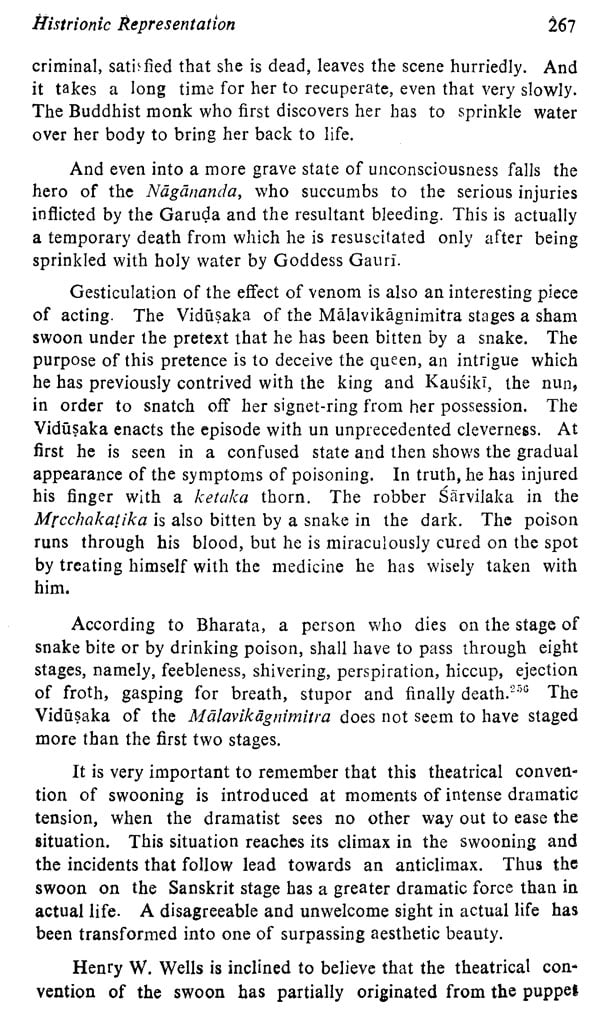 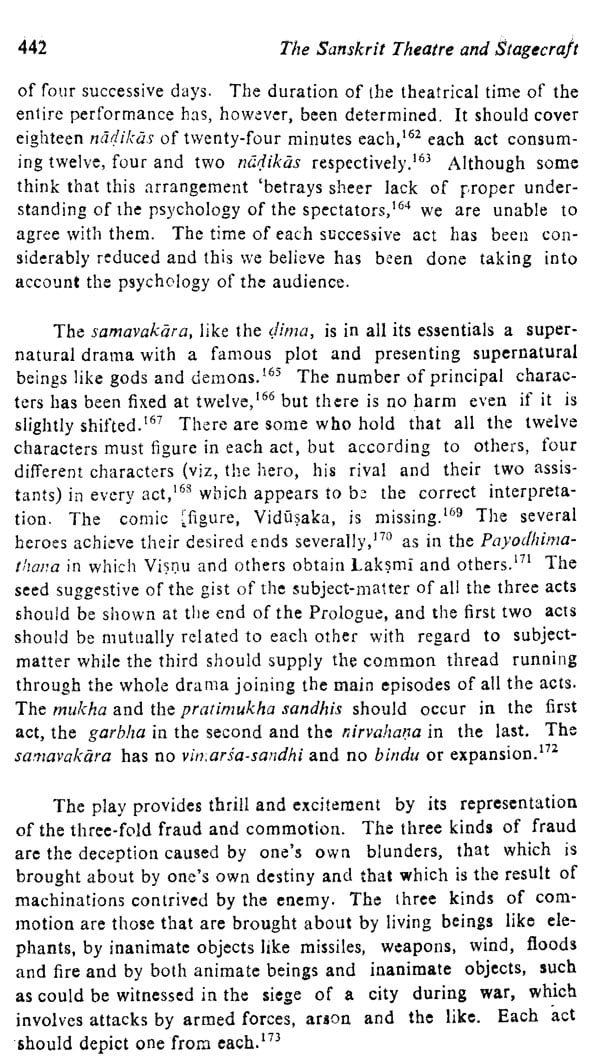 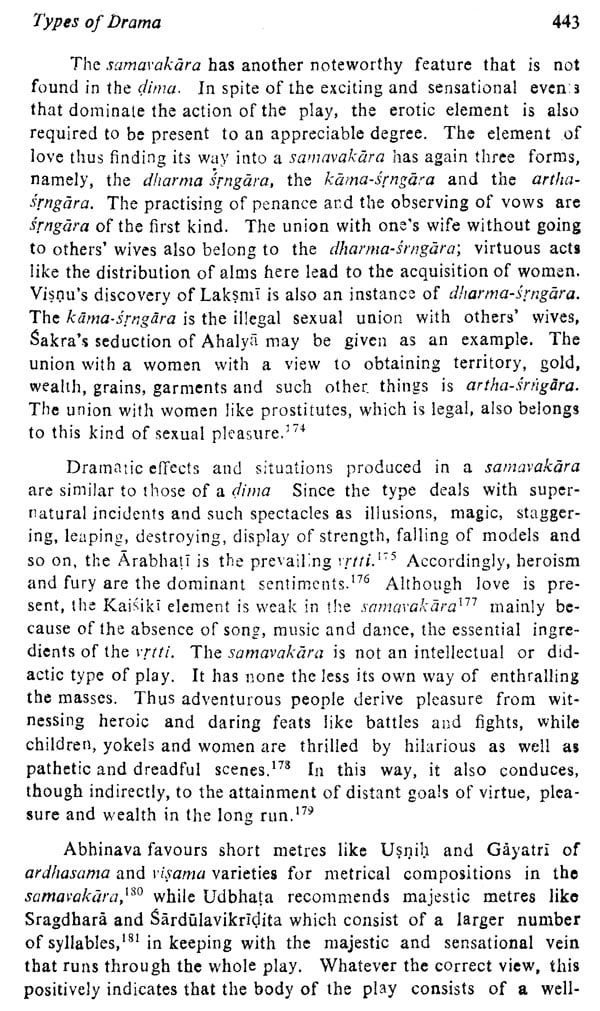 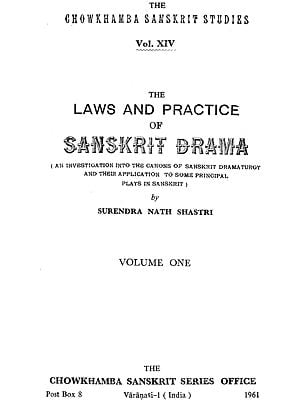 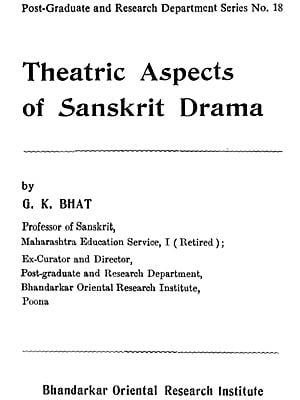 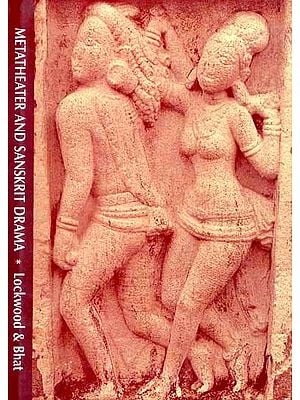 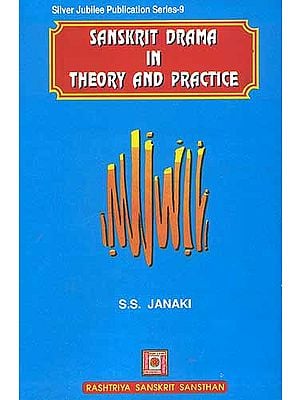 SANSKRIT DRAMA IN THEORY AND PRACTICE
By S.S. JANAKI
$14
Out of Stock 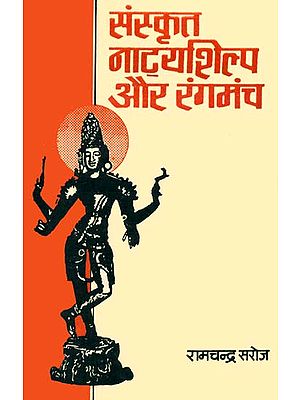 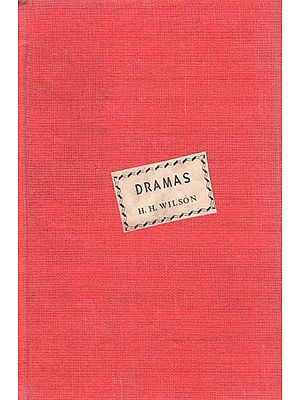 Dramas or A Complete Account of the Dramatic Literature of the Hindus (An Old and Rare Book)
By H.H. Wilson
$24
FREE Delivery 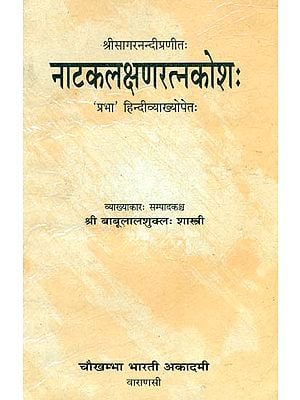 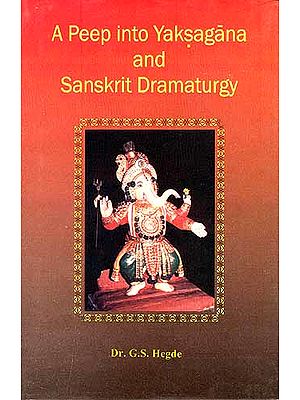 A Peep into Yaksagana and Sanskrit Dramaturgy
By Dr. G.S. Hegde
$26
FREE Delivery
Add a review
Have A Question