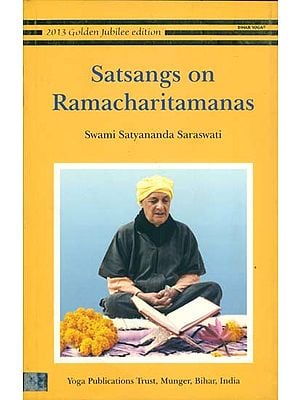 Satsangs on Ramacharitamanas is a compilation of talks given by Sri Swami Satyananda Saraswati at Rikhiapeeth, India, from 1994 to 200 I, in which he speaks on the Indian epic, its wisdom, beauty and poetry. His modern approach and language brings the ancient scripture to life and makes its spiritual instructions accessible to the reader of the twenty-first century.

Sri Swami Satyananda Saraswati found in the Ramacharitamanas the fulfilment of his spiritual quest and said that it contained the answers to all his questions. In these satsangs he shares his understanding and deep feeling for the characters, the plot and spiritual teaching of his beloved Ramacharitamanas by Tulsidas.

"Ramacharitamanas deals with life, its conflicts, frustrations and disappointments from birth to death. It gives the complete idea of the timetable of life."

Swami Satyananda was born in AImora (Uttaranchal) in 1923. Drawn to spiritual life from an early age, he left home at the age of eighteen, and in 1943 surrendered himself to Swami Sivananda in Rishikesh who initiated him into Dshnami sannyasa in 1947. He served his guru for twelve years, perfecting every aspect of spiritual life. Thereafter, he travelled throughout the Indian subcontinent as a Wandering ascetic.

Realizing the need of the times as scientific rendition of the ancient system of yoga, he founded the International Yoga Fellowship in 1956 and the Bihar School of Yoga in 1963. During the next twenty years, Swami Satyananda hoisted the flag of yoga in every corner of the world, consolidated BSY into a foremost institution of yoga, and authored over eighty major texts on yoga, tantra and spiritual life. Satyananda Yoga' became a tradition which combines classical knowledge with experiential understanding and a modern outlook. In 1984 he founded the Yoga Research Foundation to synchronize scientific research and yoga, and Sivananda Math to assist the underprivileged. In 1988, at the peak of his achievements, he renounced everything and adopted kshetra sannyasa, living as a paramahamsa ascetic. In 1989 Rikhia was revealed to him, where he came to live and performed higher vedic sadhanas in seclusion. Receiving the command to provide for his neighbours in 1991, he allowed the ashram to help the underprivileged villages in the region. From 1995 onwards, he performed a twelve-year Rajasooya Yajna with the sankalpa of peace, plenty and prosperity for all, and in 2007 he announced the establishment of Rikhiapeeth with its mandate to 'serve, love, give. Swami Satyananda attained mahasamadhi, a yogic accomplishment of discarding the body at will to become one with the universal consciousness, in 2009, in the presence of his disciples.

Ramacharitamanas was composed by Tulsidas in the sixteenth century in a rural Hindi dialect, rather than in the language of sophisticated people. While drawing on the Ramayana, the ancient Sanskrit epic composed by Valmiki, which describes Rama as a human being, Tulsidas describes Rama as a god. The Ramacharitamanas is a purely spiritual book, which was not intended just to tell the history of Rama, but to instil devotion to God into people's hearts. The foundation of every aspect of life of the Indian people can be found in this epic, which is chanted by devotees throughout India.

Such was the importance that Sri Swami Satyananda Saraswati devoted many years to the chanting of the Ramacharitamanas. Chanting became the daily sadhana of the ashram in Rikhiapeeth, Jharkhand, for the residents and guests. "I have read the Ramacharitamanas so many times. If you want to know how many times, I would have to consult my diary. I used to sit at midnight and finish it the next day at four in the morning. I would rest for one day then begin reading the whole book from beginning to end again. In bhakti it is necessary to detach the mind from the world and attach it to God."

Through this intense involvement Sri Swami Satyanand discovered his personal relationship with God and thus the fulfilment of spiritual life. "After thoroughly studying the Vedas, Upanishads, Bible, Koran and many other spiritu: books, I stopped my reading with Ramacharitamanas. The one book paved the way in my life. It took me out of the gravitational force of mind and intellect, and now it is the only book I read."

The satsangs of the present compilation, spanning the period from 1994 to 2001, were first published in the series Bhakti Yoga Sagar, Volumes 1-7. These books contain S Swami Satyananda's satsangs during the annual Sat Chant Mahayajna held at Rikhiapeeth. The present excerpts 0n the Ramacharitamanas are taken from those discourses give during the period of Sri Swami Satyananda's immersion in the world of the Ramacharitamanas.

As such this compilation is not a commentary on the story from beginning to end, nor a discussion on philosophy It describes aspects of the Ramacharitamanas that a set has drawn through his personal reading and experience opening the door, in a simple way, into the heart and spirt of this profound epic.

Each sutra, or aphorism, elucidates a truth and those which are included here guide and inspire the reader towards a feeling and understanding on a deeper level. Sri Swan Satyananda Saraswati understood the shabar mantras, the subtle mantras interwoven through the main text, that a ordinary reader would not know of. These hidden mantra are like locks to a transcendental experience which Sri Swan Satyananda conveys through his feeling and insight.

The selection of satsangs compiled in this volume introduce the many topics dealt with in the epic: its history and plot, the question of God with or without form, faith devotion and surrender, life and suffering, grace and the power of the divine name. The ancient wisdom is elucidate in a modern language and style so that the present-day reader is able to relate to it easily.

Sri Swami Satyananda understood the need of people for spiritual guidance and inspiration. He had found both in the epic. His desire to communicate his love and understanding can be felt in every word of these satsangs. "Ramacharitamanas deals with life, its conflicts, frustrations and disappointments from birth to death. It gives the complete idea of the timetable of life. It is a commentary on faith and the most powerful tonic for generating bhakti. 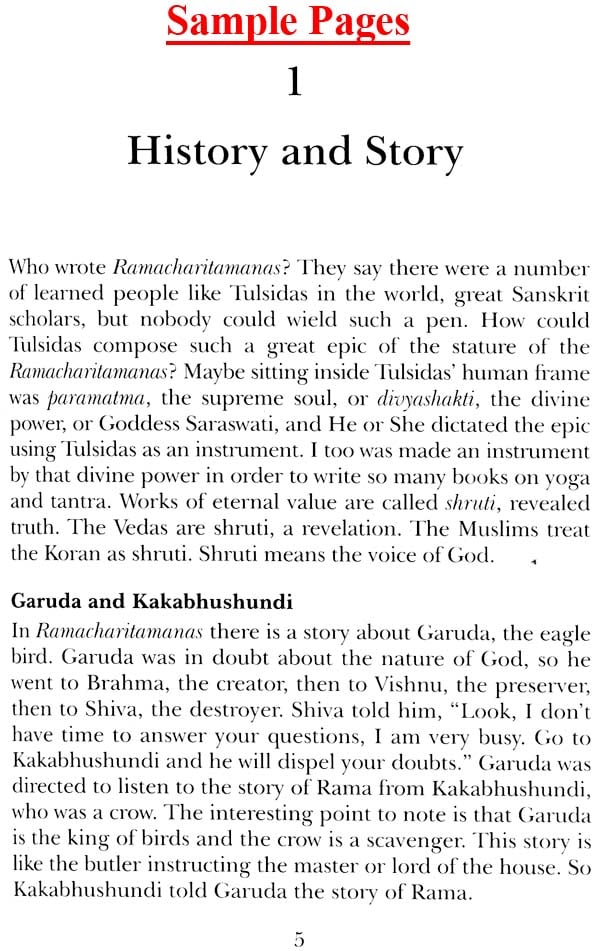 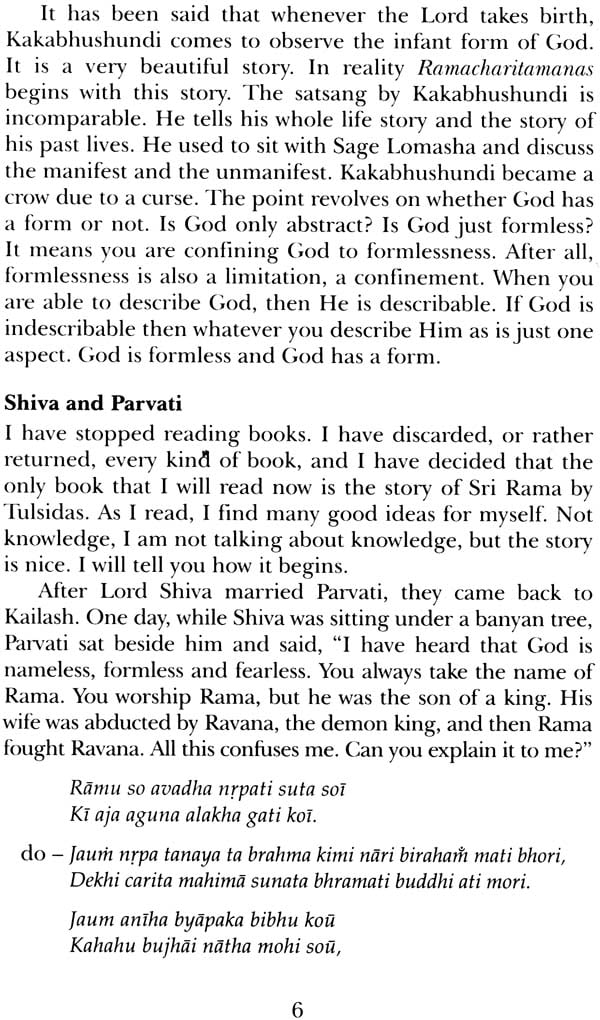 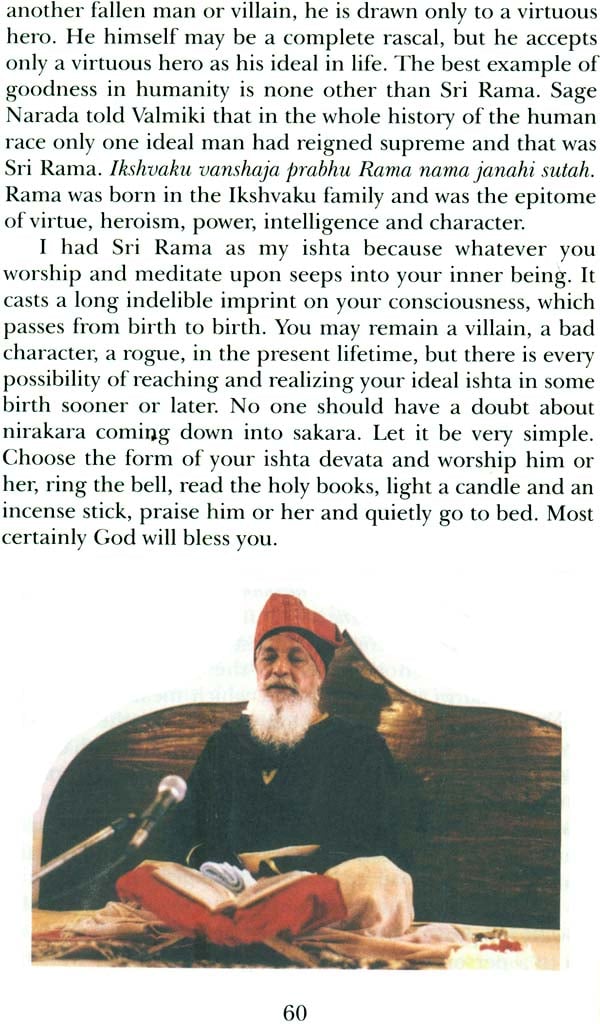 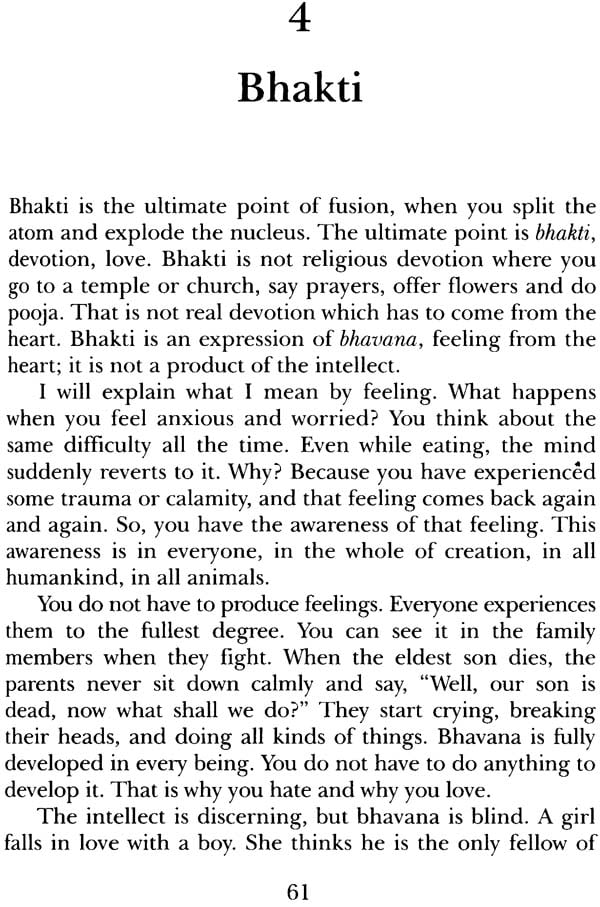 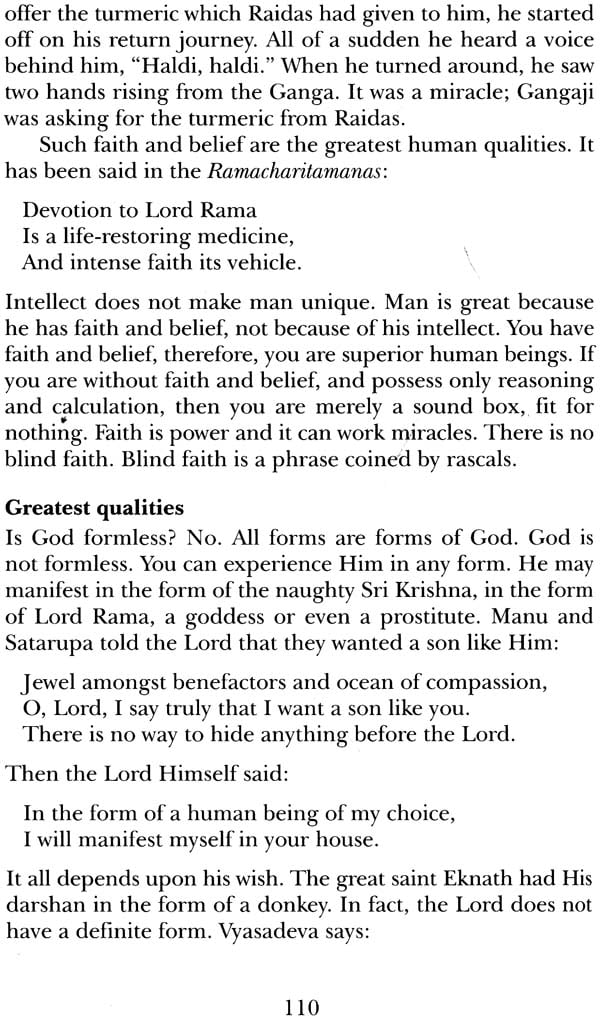 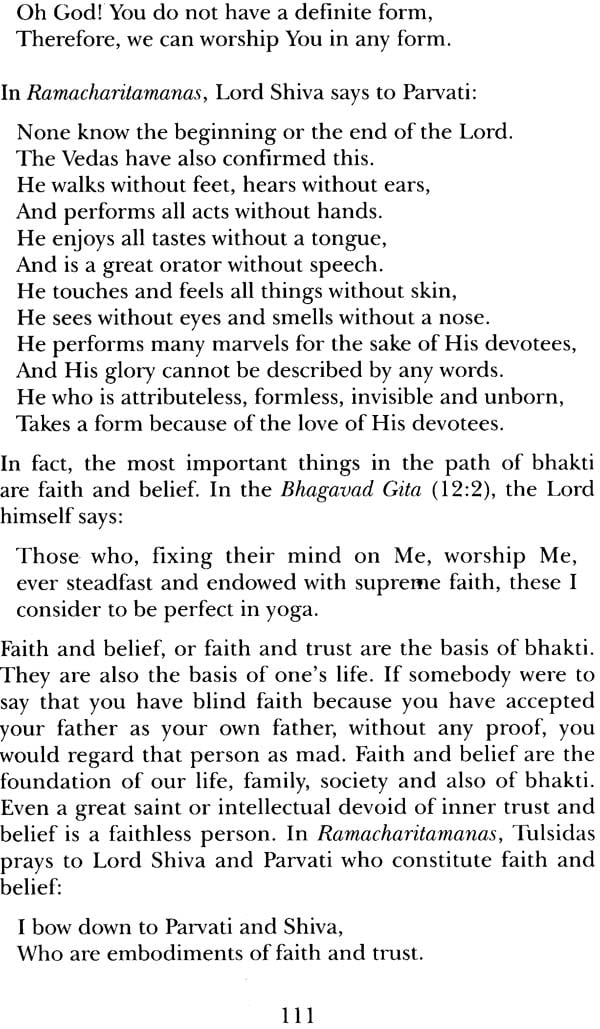 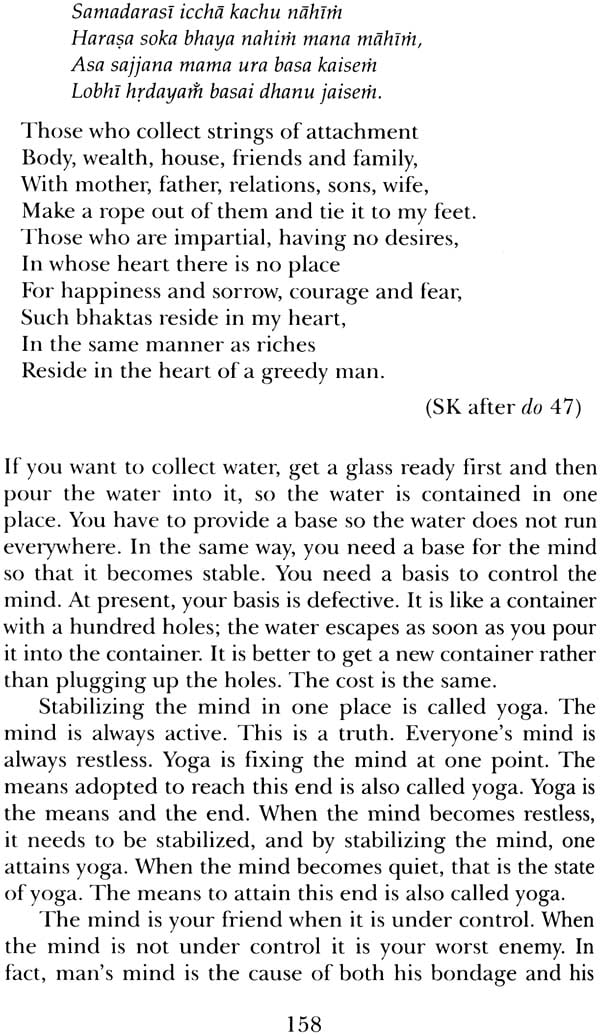 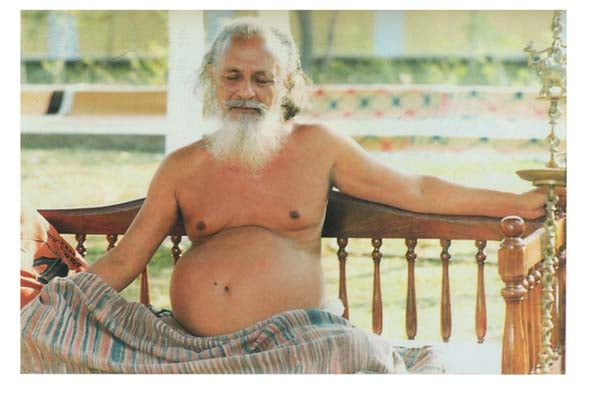 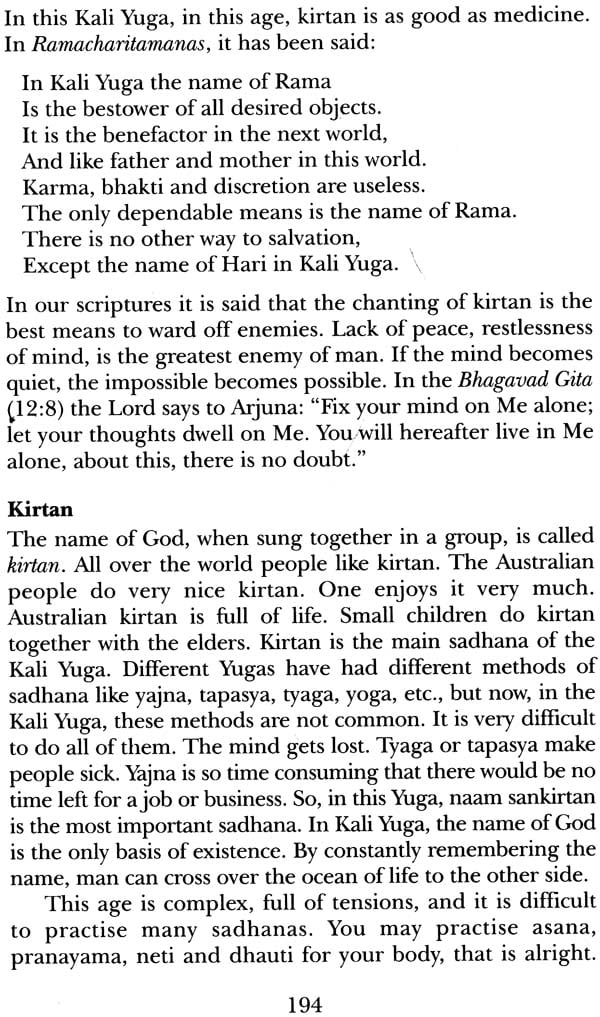 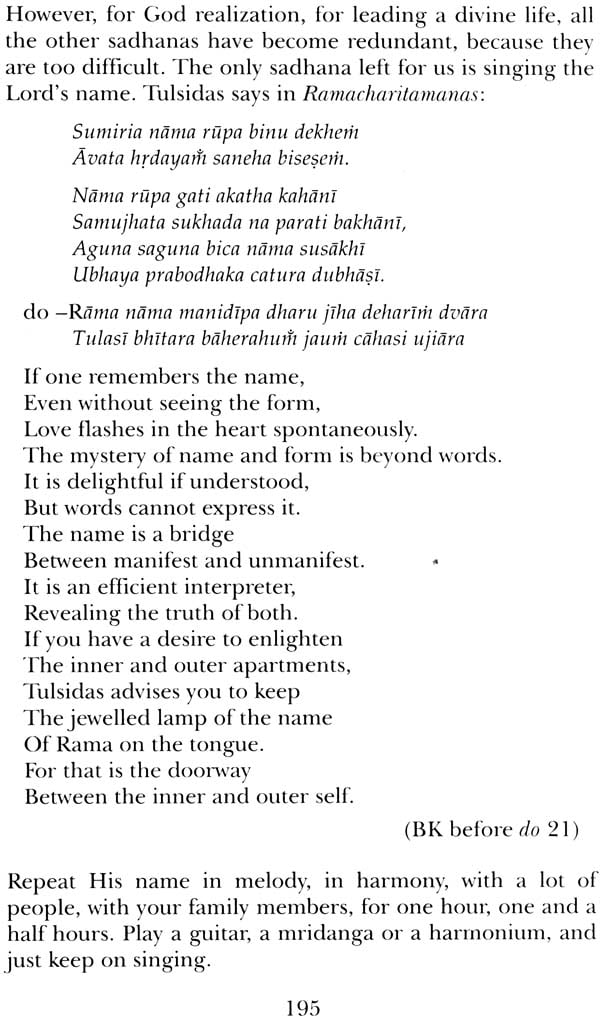