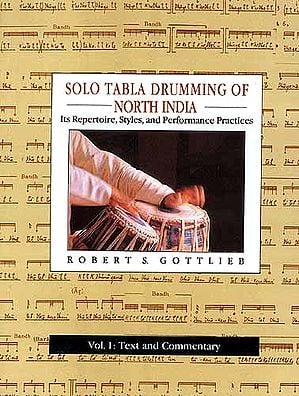 $85.00
Notify me when this item is available
Save to Wishlist Send as E-card Share by Email
From the Jacket:

Volume One: Text & Commentary furnishes the reader with information pertaining to th variety of applications of the Tabla in North Indian classical music, the Gharanas of Tabla, an explanation of the Bols accompanied by photographic illustrations, a discussion on the basic repertoire and how it relates to improvisations, and an explanation of stylistic features relevant to the recorded performances. The author has also included an explanation of the notation system and his own comments and notes for each of the performances. The appendix of this volume contains a glossary of technical terms with their derivative language forms and reference list of the Tals of North Indian music.

Volume Two: Transcriptions consists of transcriptions of Solo Tabla performances by India's leading artists. Since the music and performances of Indian musicians have never been written down, this presentation will provide for the first time a detailed insights into the extemporized practices of Indian drumming. Robert Gottlieb has recorded and transcribed the performances of six outstanding players who represent the six major traditions of Tabla. These traditions are derived from particular Gharana (schools) which have fostered the art of Tabla playing. The following players were recorded in India in 1971: Ustad Inam Ali Khan (Delhi Gharana), Ustad Keramatullah Khan (Farukhabad Gharana), Ustad Wajid Hussain (Lucknow Gharana), Pandit Kishan Maharaj (Benares Gharana), Ustad Allah Rakha (Punjab Gharana). In addition, selected excerpts from older tapes of Ustad Habibuddin Khan (Ajrada Gharana), have been included since he is no longer performing.

These performances have been completely transcribed into notational form combining the rhythmic elements of western notation and the traditional Tabla drum-syllables (Bols) which are used by Indian musicians to define the various strokes. Each of the transcription has been clearly notated to show the variety of formal structures and rhythmic patterns in relationship to the underlying time-cycle (Tal). The author has further distinguished in notation varied elements of performances from fixed elements in order to provide an immediate visual awareness of the improvised aspects of performance. The six transcriptions together with the recordings (in two audio cassettes) provide basic reference materials for comparative stylistic studies.

Dr. Robert Gottlieb was formerly a professional musician, conductor, and Professor of Music. He was a Professor at the University of California Riverside Campus, and taught inter-disciplinary studies at the Evergreen State College in Olympia, Washington.

Robert Gottlieb's principal area of research in Western music was ornamentation and his interest subsequently led him to cultivate his studies in the improvisational aspects of Indian music. In addition to his work on Tabla he has also published on the subject of symbolisms underlying the performance practices in Indian music, and on the music of Muttuswami Diksitar. He also published recording on the music of Sudan for the UNESCO series on African music and produced and directed an award winning film on Kathak dance which is being distributed by the University of California Extension Media Center in Berkeley, California, U.S.A.