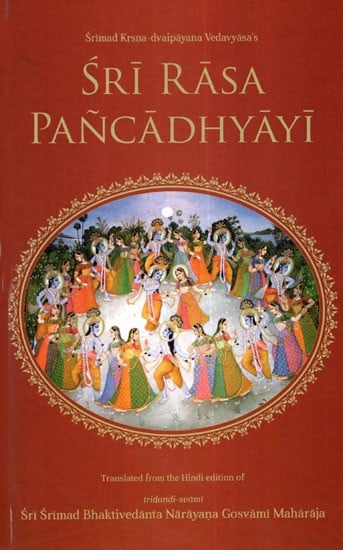 On 14 October 2008, Šaradiya Rāsa-purņima, the disappearance day of Śrīla Bhakti Prajñāna Keśava Gosvāmī Mahārāja, our beloved Gurudeva nitya-līlā-pravişta om vişnupāda aștottara-sata Śrī Śrīmad Bhaktivedānta Nārāyaṇa Gosvāmī Mahārāja presented Śrī Rāsapañcădhyāyīto the Hindi-speaking public. Thus he answered the call of our guru-varga to disseminate the Tenth Canto of Śrīmad-Bhāgavatam with the bona fide commentaries. By doing so, he has assured that the world can have access to the true understanding of the astonishing activities and nature of parama-purusa Vrajendra-nandana śyāmasundara in Goloka Vraja.

Rāsa-līlā is the very zenith of all of Śrī Krsna's activities. Everything about this pastime is phenomenal, to the utmost degree. This festival of divine love proves beyond a shadow of a doubt that Nanda-nandana is no ordinary person. How he danced with billions and billions of the fabulously beautiful, sweet and enchanting Vraja maidens at the same time and thoroughly satisfied each and every one of them is simply a feat beyond the grasp of our material understanding! Only Svayam Bhagavān, the Supreme Godhead Himself, can effect such an accomplishment. In all of existence, indeed, there is no one else capable of doing this. And what was the purpose of His inconceivable, extraordinary behavior? He wanted to share higher and higher levels of prema with the gopīs, whose love and dedication for Him outshine His love for them.

Another aspect of the beauty of this rāsa-līlā is that the joy that filled the forest on that full-moon autumn night was not limited to just Krsna's and the gopīs' experience. No, it touched the whole universe and removed the sufferings of all beings at that time. And even today its effect is still flowing down on Earth, blessing everyone with the promise that we too can become devoted to Śrī Krsna like the gopīs just by hearing about this startling, prema-filled pastime from pure Vaisnavas. The joy that spread throughout the universe on that Śaradiya Rāsa-purņima is ultimately available to us as well. So how merciful is the Supreme Lord that He wants to share His happiness with us and has thoughtfully provided us the effective tool to join Him in the form of this very book!

There is a great necessity to write a special commentary on the Tenth Canto of śrīmad-Bhāgavatam for those who earnestly thirst to serve Transcendent Beauty. Such an exposition will not be a display of the pompous language that big scholars utter in their dissertations on the Tenth Canto. Nor will it be the exhibition of the imitationists, the praksta-sahajiyās, who accept their cheaply conceived fantasies as part of absolute reality. Therefore, those in whom ardent spiritual greed has arisen will certainly want to read this book.

In this world there is no treatise like Śrīmad-Bhāgavatam. It is not hearsay or mythology. If a person truly follows the deliberations of ŚrīmadBhāgavatam without material motivation, he will understand that there is no text that can ever compare to this scripture – now or in the future. ŚrīmadBhāgavatam presents in sequence the progressively evolved conceptions of the Absolute. The preliminary conception is doubt in the existence of any supreme truth (saṁsaya). Next comes denial of the personal Absolute (nāstikya), then acceptance of the Absolute as impersonal and featureless (nirguņa), the theory that God exists but is neuter (klīva), the potent Godhead (puruşa) and then the Potent and His Potency (mithuna). The conception next evolves to svakiya, the eternal matrimony of the Supreme Male and His consort, and finally parakiya, the paramour conception of the Divine Couple.

In the Tenth Canto Śrī Krsna's pastimes, the main subject of this book, are described, so what was the need of presenting the first nine cantos? They come first to make a platform to highlight the fact that Śrī Krsna is the completely independent autocrat. His loving affairs are the paramount subject of the Śrīmad-Bhāgavatam. The first nine cantos present the rudimentary theories of doubt up to the conception of conjugal love God, and in the Tenth Canto, in chapters like Gopi-gīta, the paramour conception is revealed.

It is our great pleasure to present this edition of Rāsa-pañcādhyāyī, taken from the Tenth Canto of Śrīmad-Bhāgavatam. This book is born Lout of the causeless mercy and inspiration of our most worshipable gurupāda-padma, ācārya keśarī nitya-līlā pravişta om vişnupāda aștottara-śata Śrī Śrīmad Bhakti Prajñāna Keśava Gosvāmī Mahārāja. We have included our ācāryas' commentaries: Śrīla Śrīdhāra Svāmīpāda's Bhāvārtha Dīpikā, which Śrī Caitanya Mahāprabhu accepted, Śrīla Jīva Gosvāmīpāda's Sarksepa Vaisnava Tosaņī, and Śrīla Viśvanātha Cakravartī Țhākura's Sārārtha Darsinī. Furthermore, we have written our own Bhāvānuvāda explanation based on the three ācāryas' elucidations. There were many Bengali translations of these three commentaries, but there was nothing in Hindi. I hope that the Hindi-speaking public will be able to relish our Rāsa-pañcādhyāyī with the commentaries.

A few years ago I spoke a series of lectures on Śrī Rāsa-pañcādhyāyī along with its commentaries. After hearing these deliberations, my audience again and again requested me to publish these in book form in Hindi. I could not refuse them. I do not know how this turned out; only the readers can judge.

“I worship the Śrīmad-Bhāgavatam, which is the bridge for crossing the ocean of repeated birth and death; it has appeared for the benefit of all beings as the literary incarnation of Śrī Krşņa. He is the origin of all the gods, the storehouse of mercy, and is black like the tamāla tree. 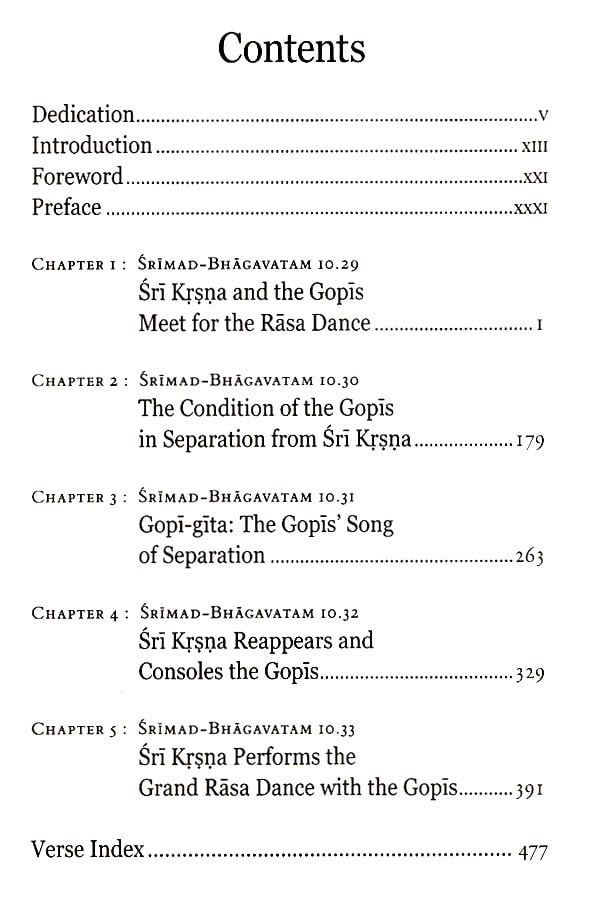 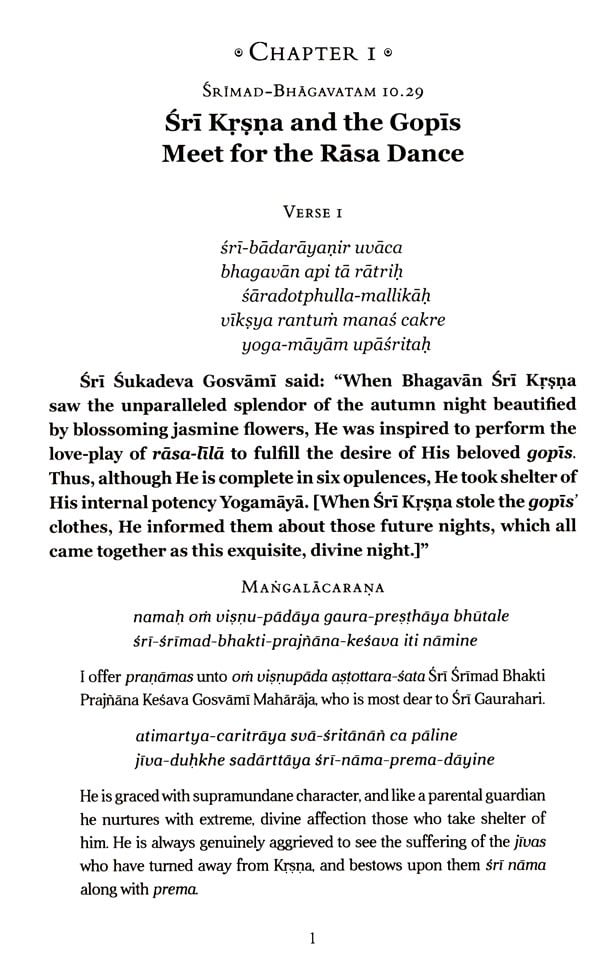 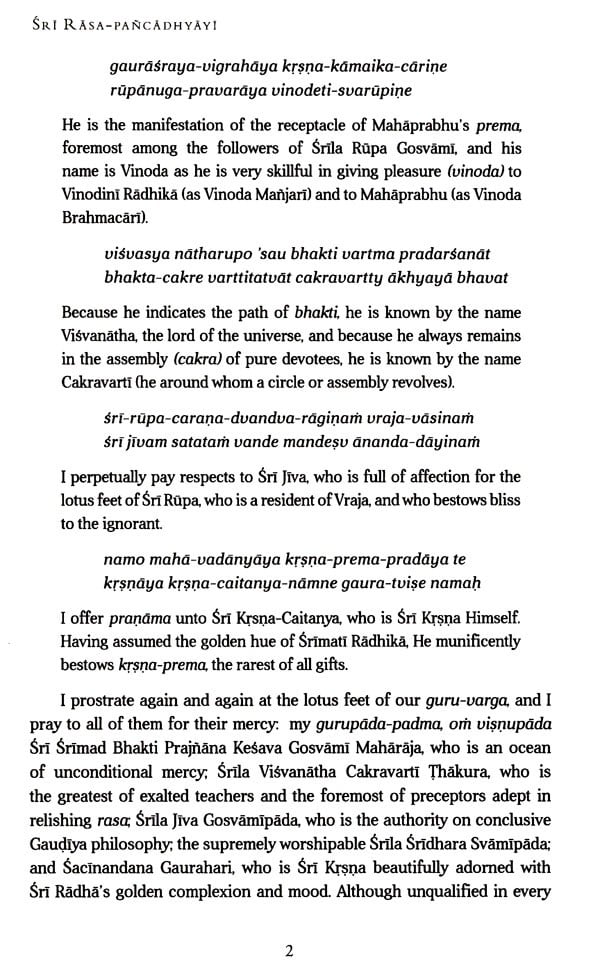 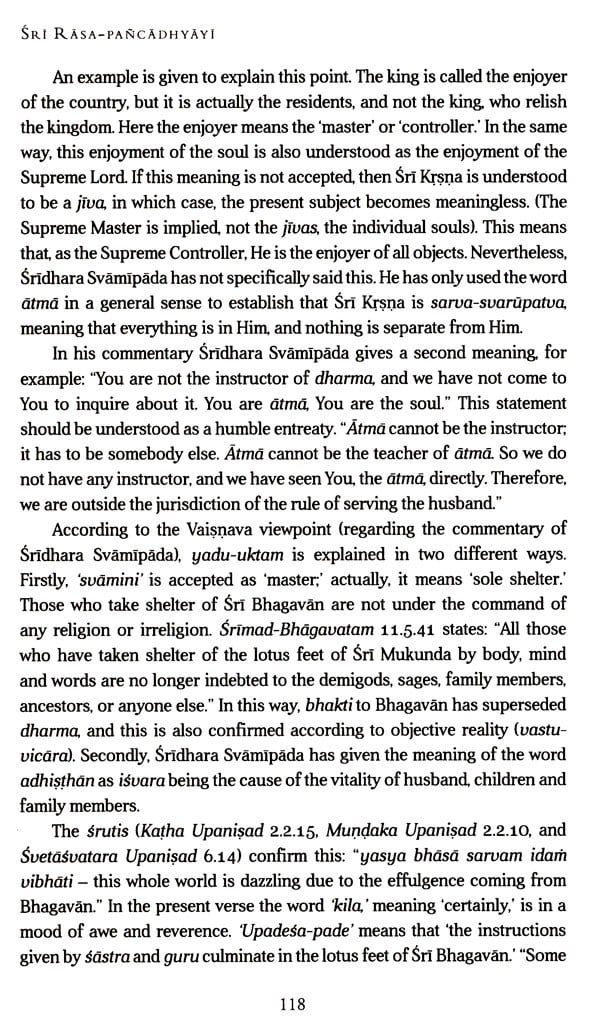 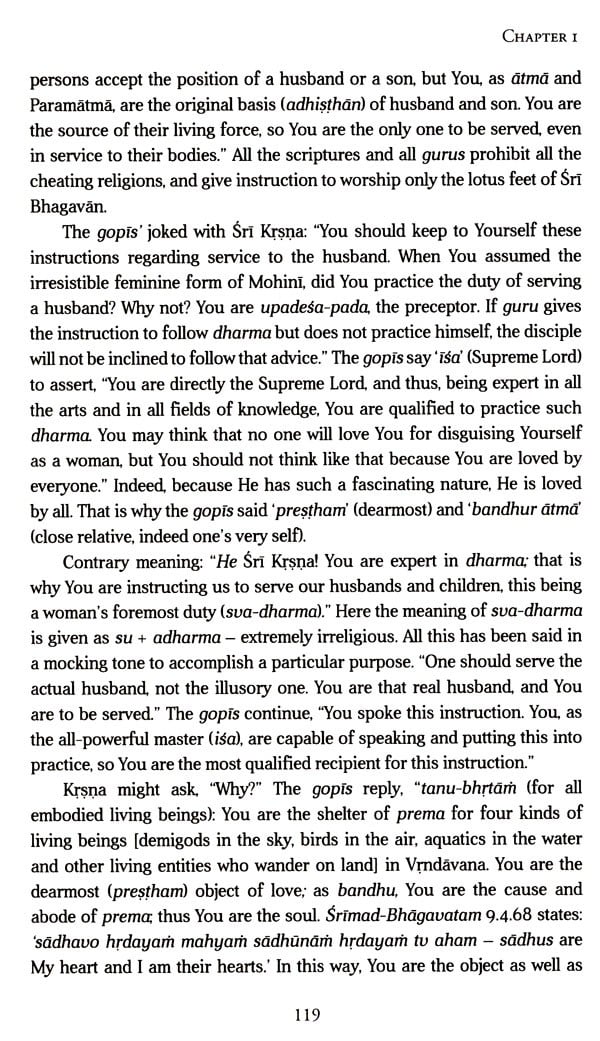 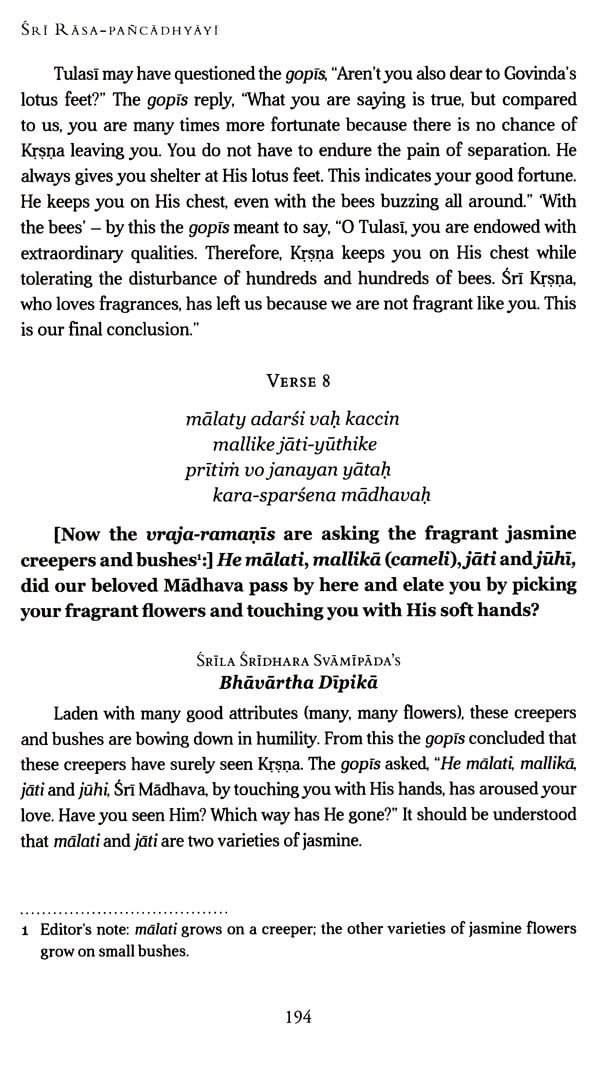 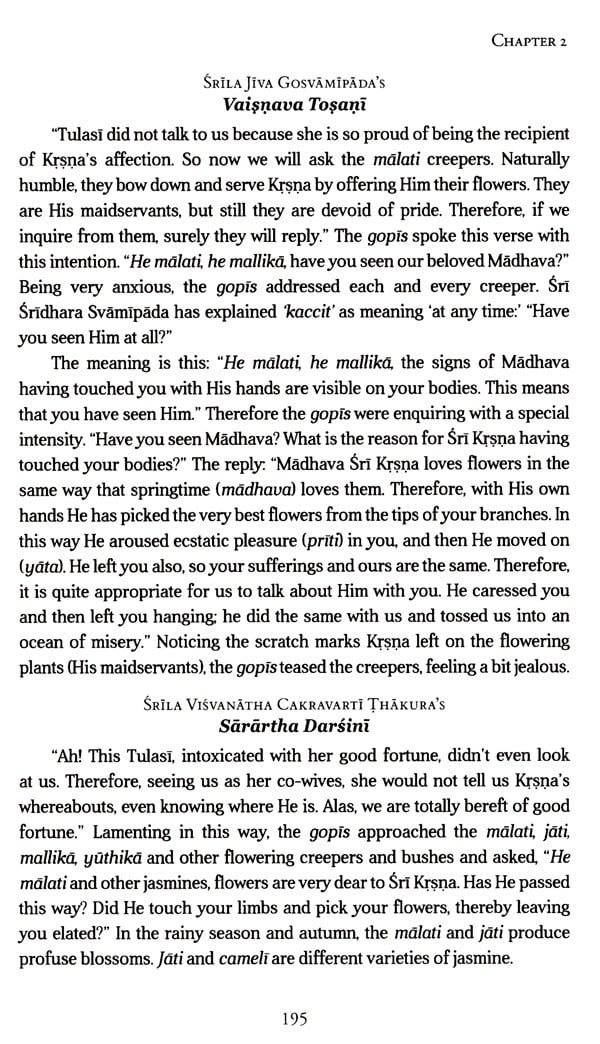 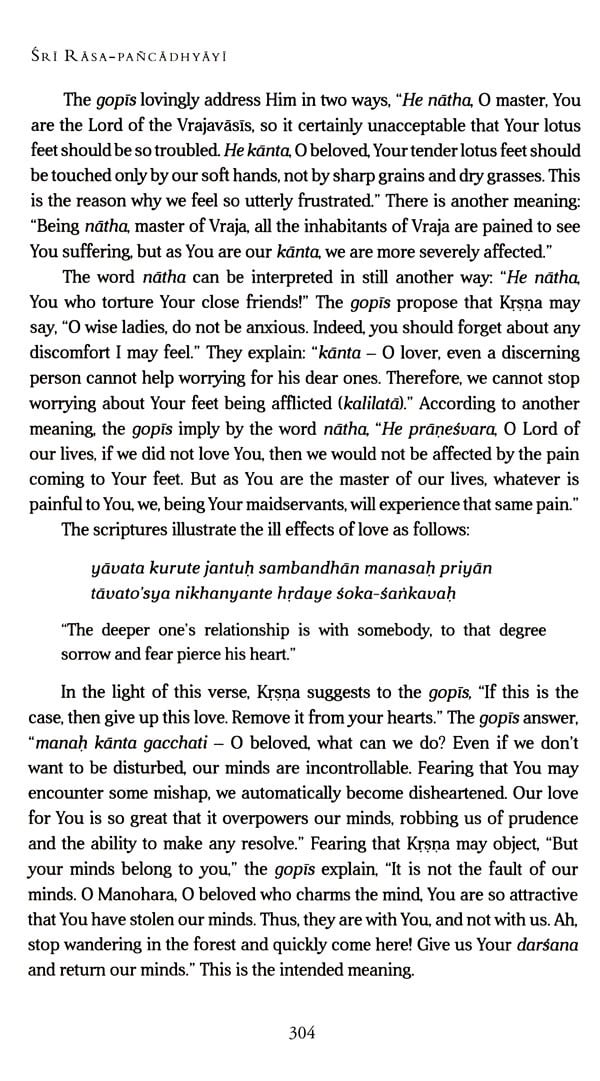 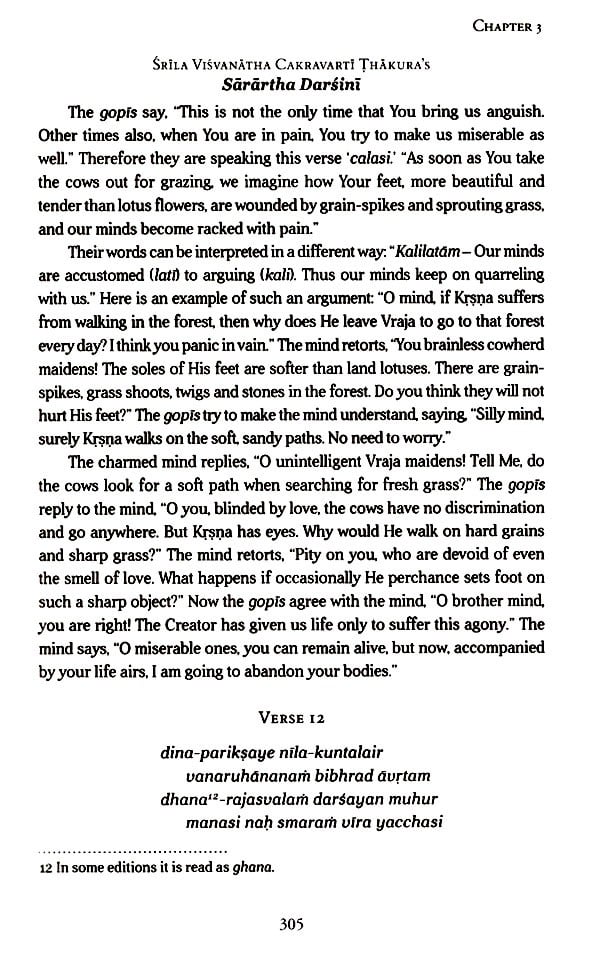 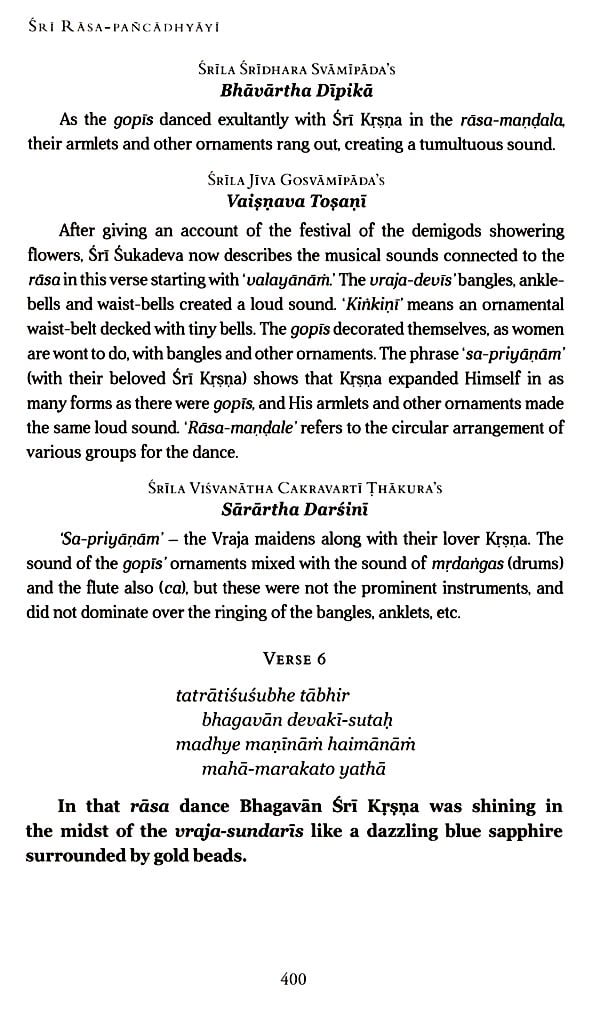 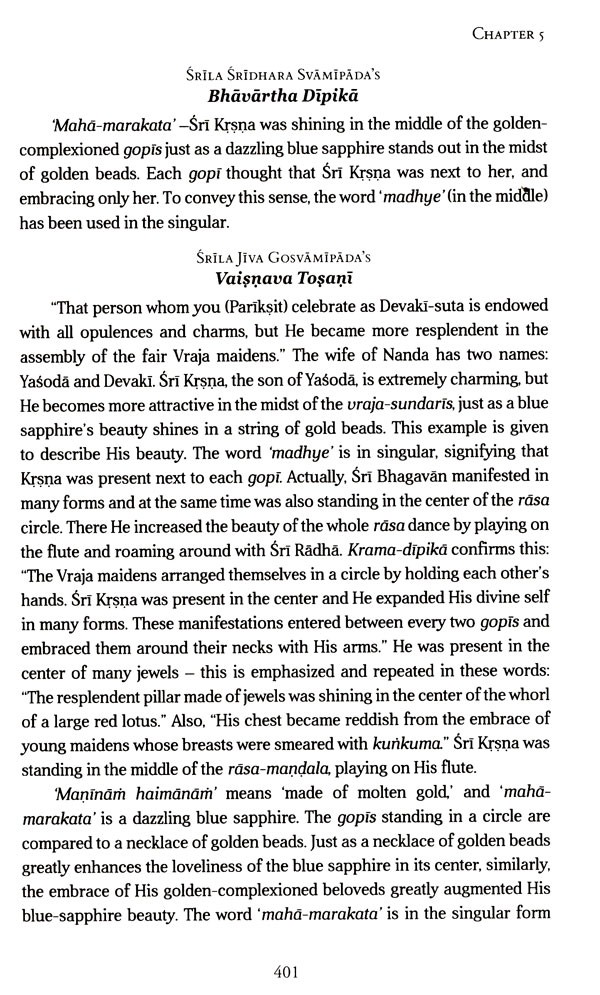 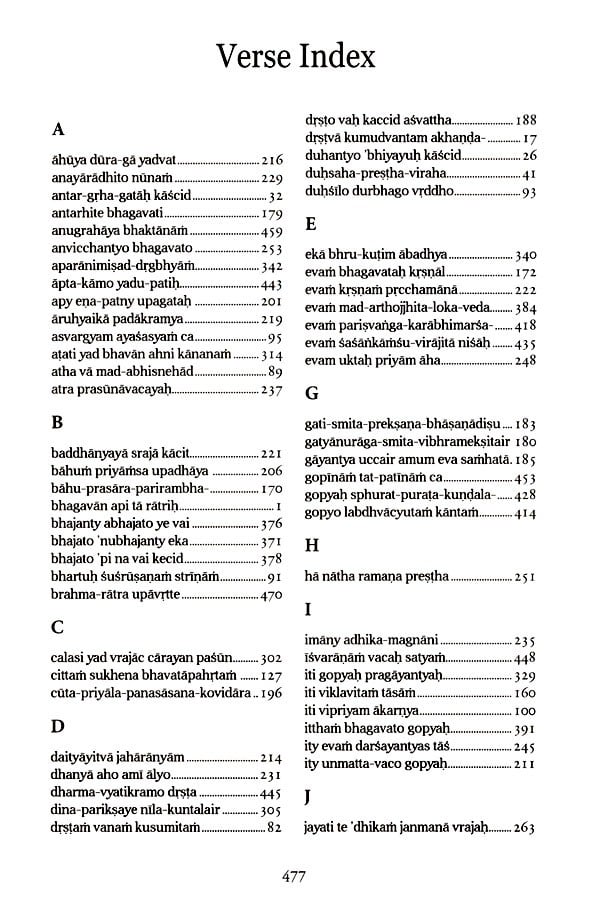 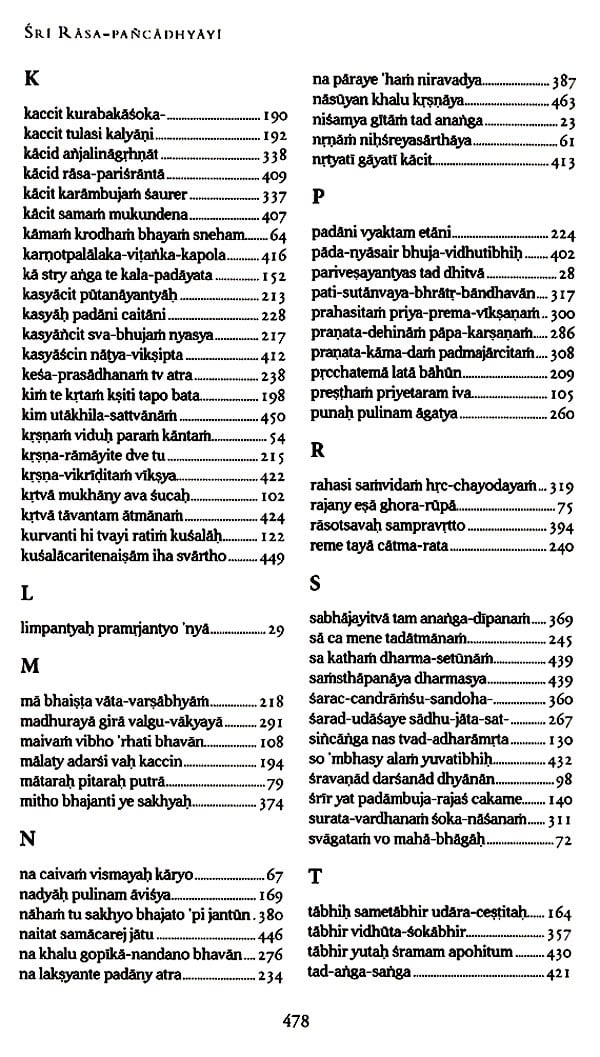