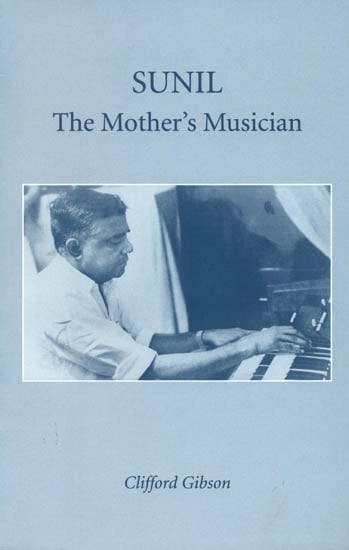 In the fall of 1971 I received a letter from Sunil Bhattacharya. I had written to the Sri Aurobindo Ashram asking about music played by the Mother of the Ashram. Sunil answered with details of the Mother's music and briefly introduced himself and his music: "I am myself a composer. I am assisted by a group of musicians of the Ashram for my orchestral reproductions. My style of music is entirely a development, an expression of the deep impression that the Mother's improvisations had created in me.

After I sent a reel-to-reel tape with return postage for my first taste of Sunil's music, The Hour of God arrived in my mailbox and opened doors onto a new world of beauty and inspiration. Like many who cherished his music I asked about sharing his music with others and Sunil replied: "Regarding the question of permitting people to copy from the tape I sent you, I leave the matter entirely to your discretion. I do not want my music to be commercialized, at least just now. So please exercise a little bit of caution and allow only those people to copy who want the music only for their personal enjoyment."

Attempts were made over the years to persuade Sunil to allow his music to be made available to a wider audience, but he always refused, saying that he felt publicity, "would introduce one more bond, one more power which is irrelevant to what I am given to do and the consequences may well recoil into my life and, above all, into my work." Describing the inner world from which his music sprang he once wrote to a friend: "The insane relish of work is gone, the allegretto agitato of strings have died down but I can however hear muffled base chords resounding like heavy footfalls of strangers along the corridors of my mind. Yet deep within me there is a still pool which sends back the image of a light that is burning somewhere." He did not wish to transform that still pool "into a neon-lit sales counter."

In 2002 I heard of a book project on Sunil that had been started and abandoned and I contacted Victor Jauhar who had helped record Sunil's music from early on. Victor had worked with Mirajyoti Sobel on the suspended Sunil book project and put me in contact with her. I was delighted to have the opportunity to look through the archived materials and enquired about being allowed to take up work on the project. I looked forward to hearing Sunil's voice come back to life in his letters and hoped it might be possible for others to come into contact with the person they have known through his music.

I received permission from Manoj Das Gupta, Managing Trustee of the Ashram, and Minnie Ganguli, Sunil's sister, to look through the 16 large boxes of correspondence containing many dozens of folders and some thousands of letters and other documents and photos lovingly preserved over the years.

Selecting from this material I have tried as much as possible to let Sunil tell his story in his own words through his correspondence with many friends and admirers of his music over a period of several decades from the early 1960s until his passing in 1998. We are fortunate that Chhobi Ganguli, his sister-in-law and faithful secretary, scrupulously saved almost all of Sunil's correspondence over the years and it is from this cache of correspondence that the bulk of letters and quotations contained in this book have been chosen. Also included is the Mother's correspondence with Sunil regarding his music as well as comments she made about his music in other places.

In addition to the correspondence is a truncated auto- biography of Sunil which details his early childhood in the small town of Krishnagar in West Bengal and his life in Calcutta where his family moved before Sunil reached school-age and where he learned to play the sitar from his cousin who had studied with two famous sitar players of the time. Sunil's own account ends while he is still quite young and does not mention studying at Xavier's College in Calcutta where he received a degree in chemistry.

Sunil picks up his story from his first visit to Pondicherry in 1942 and from this point his words are taken from his correspondence. Complementing the letters written by and to sunil are interviews with several people who knew Sunil intimately and accounts written of Sunil’s life residents of Sri Aurobindo Ashram. 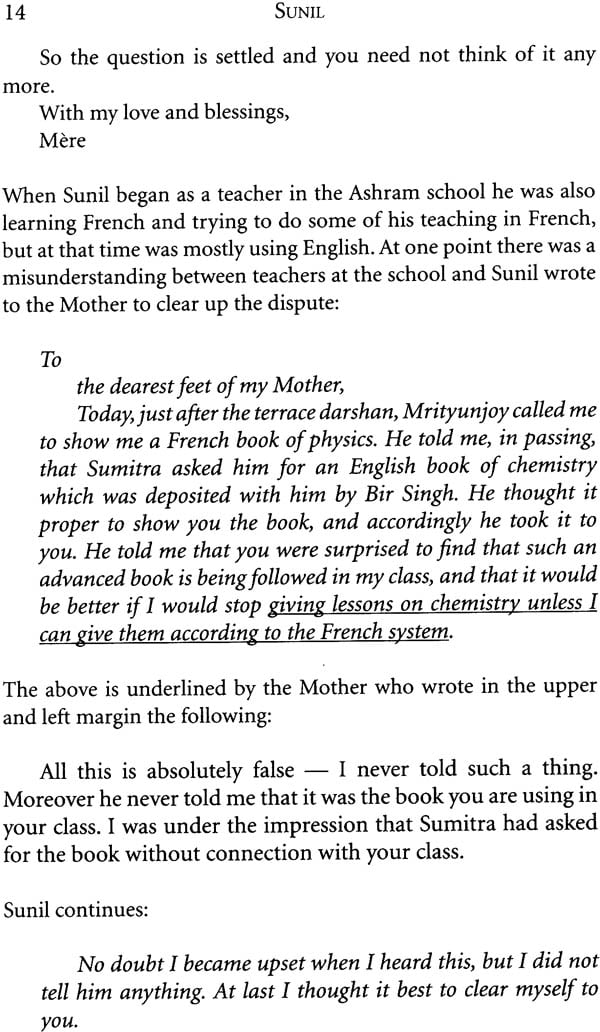 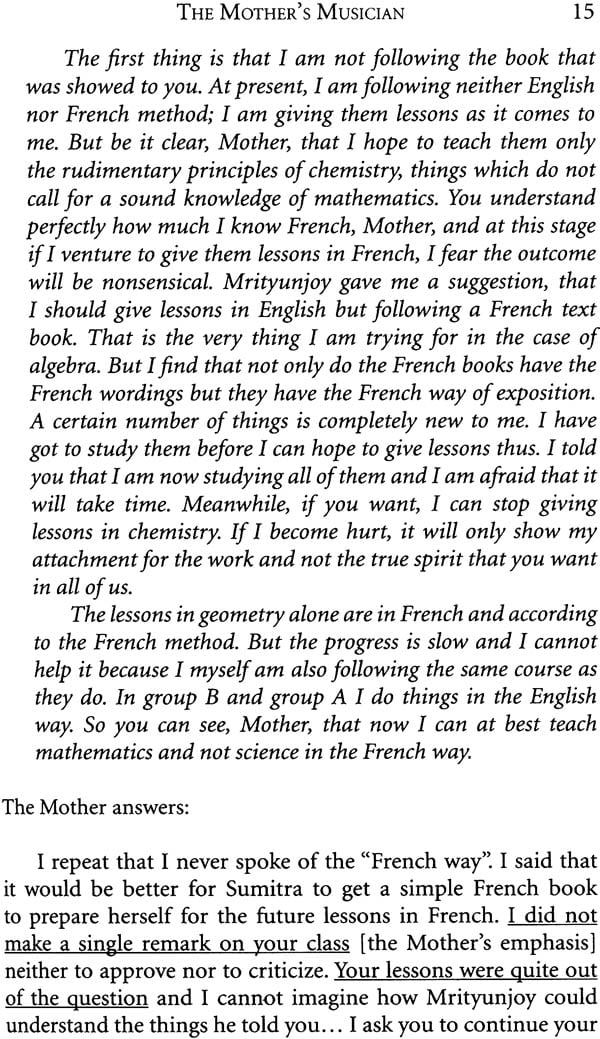 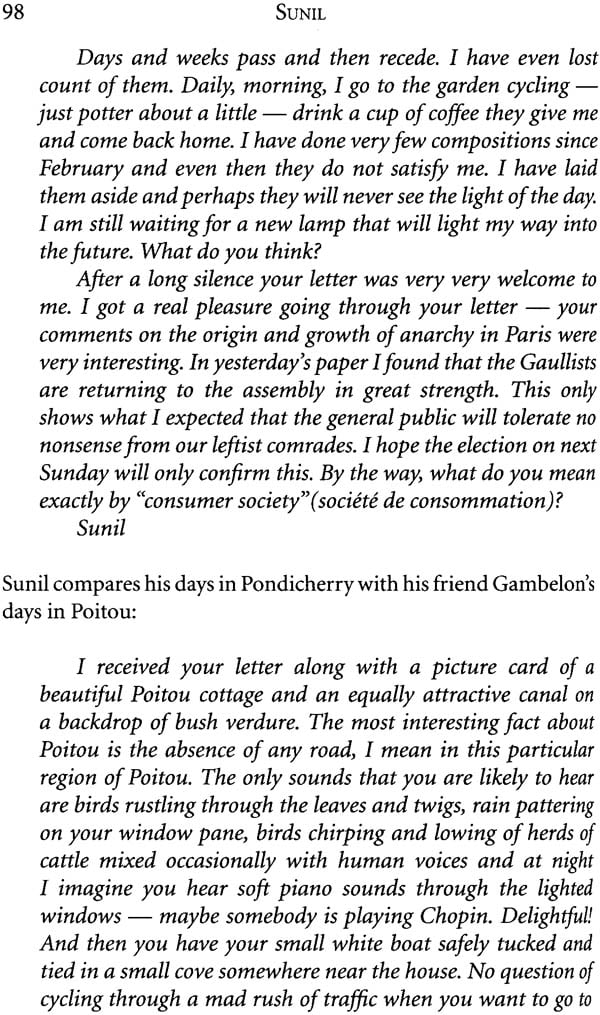 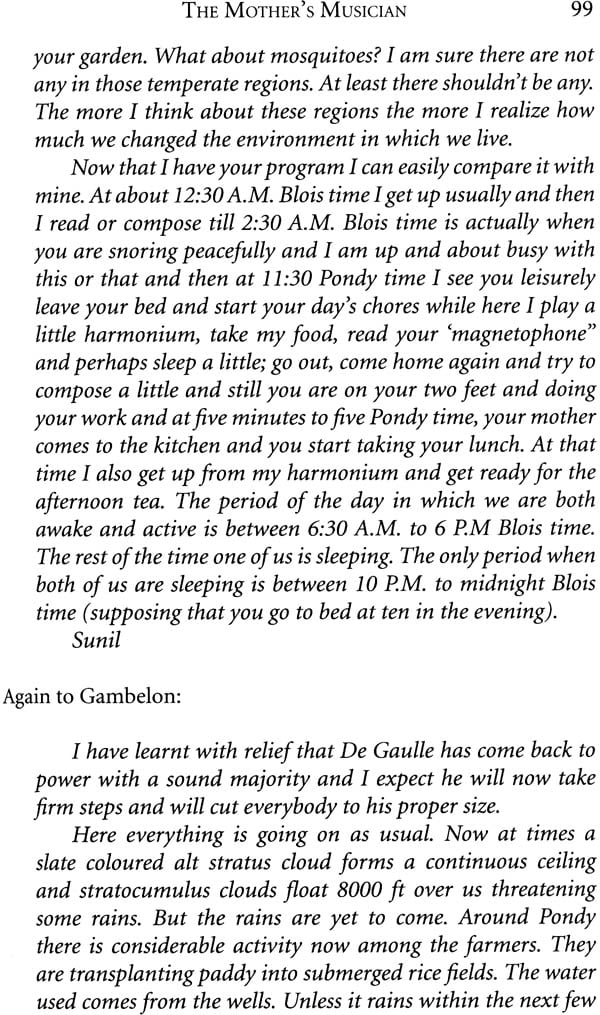 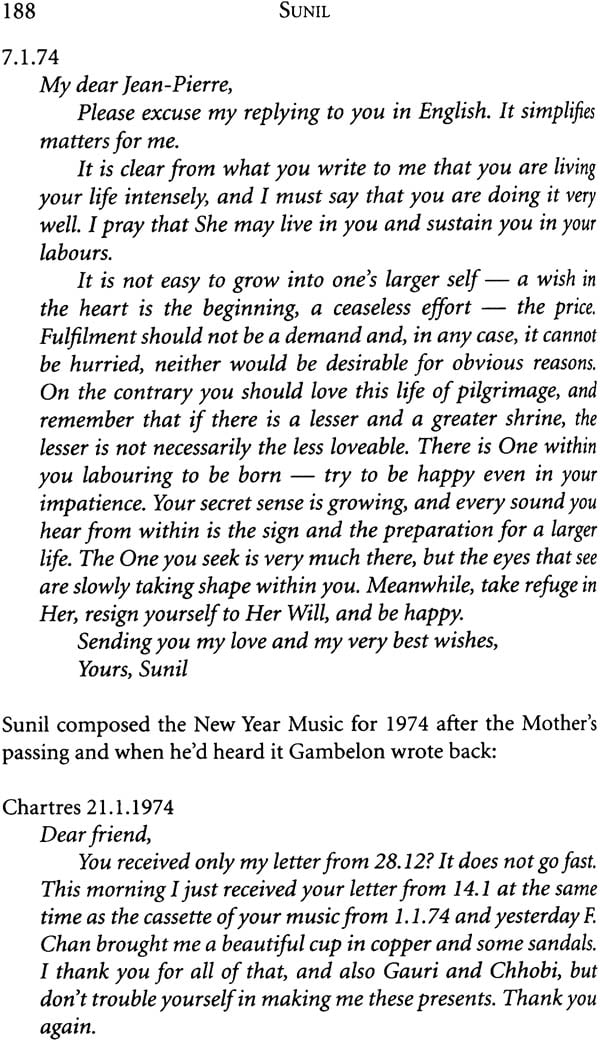 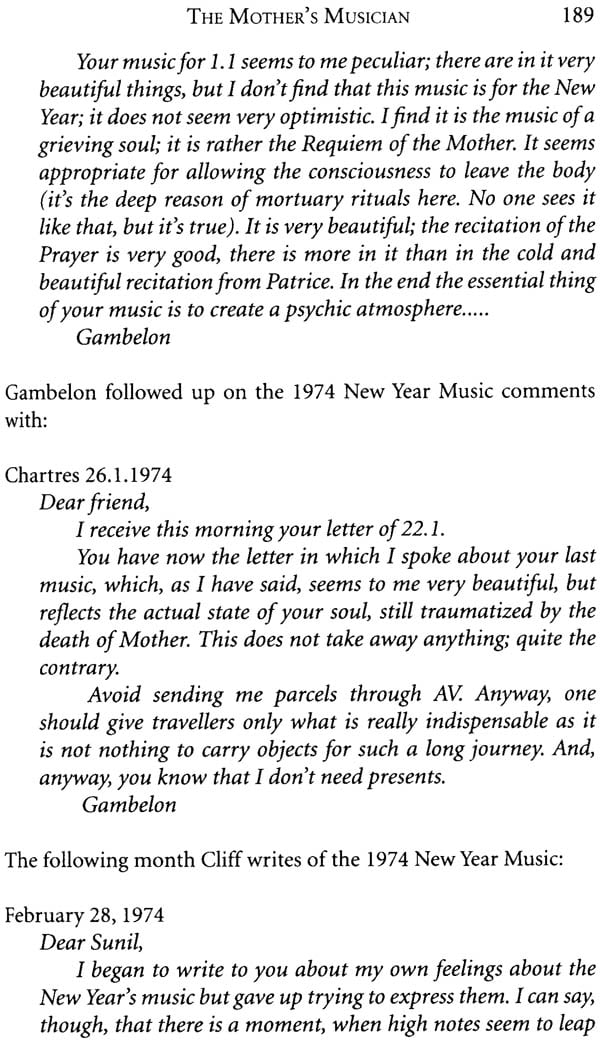 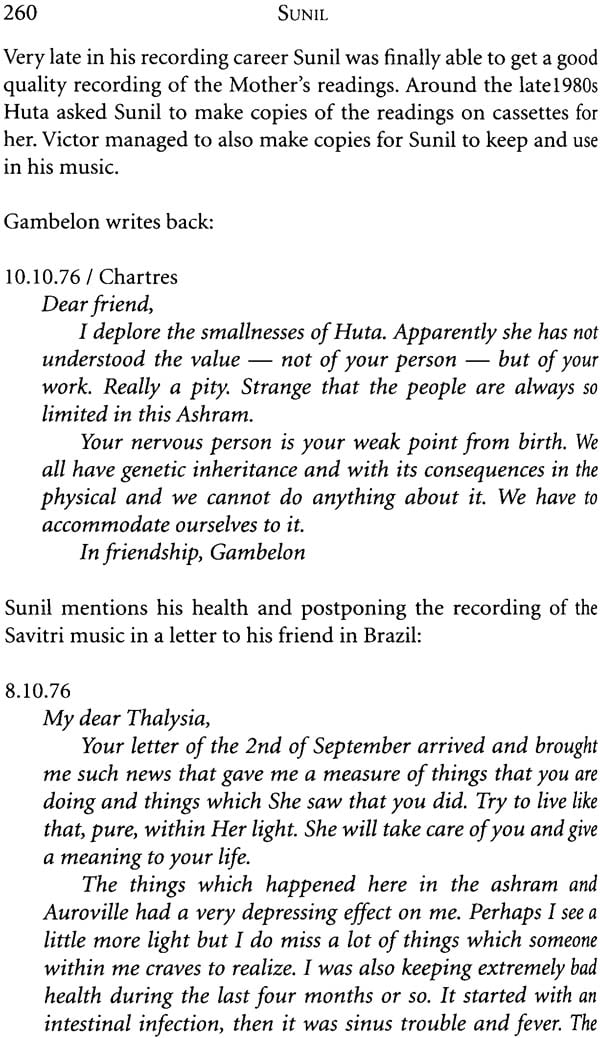 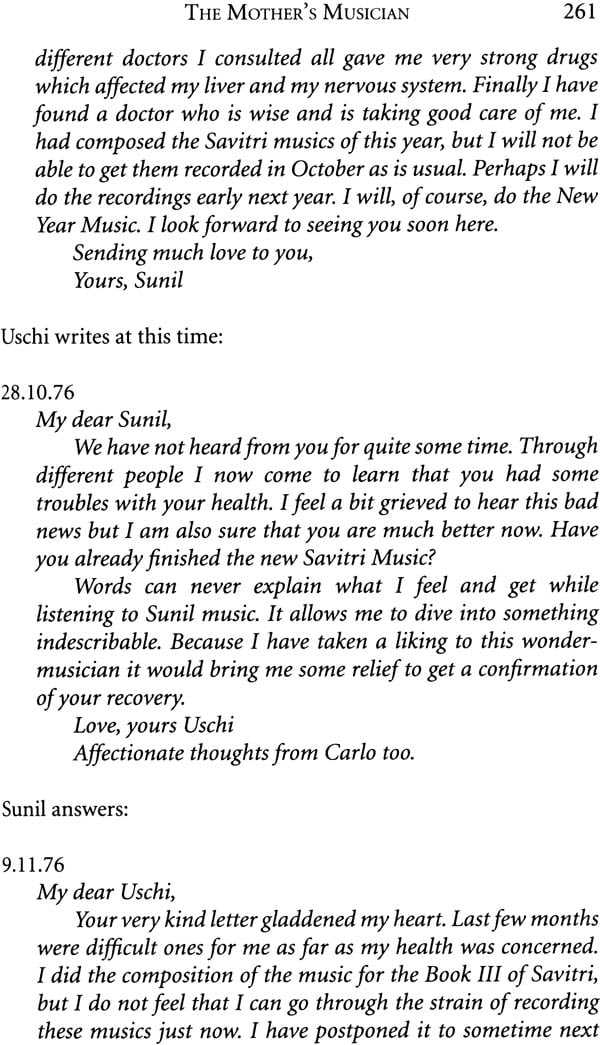 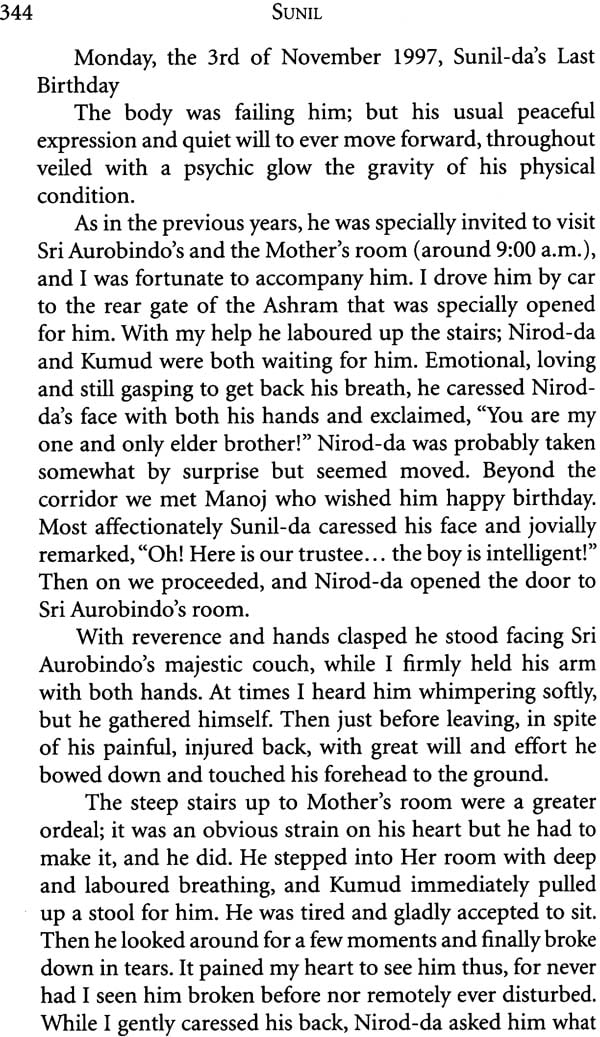 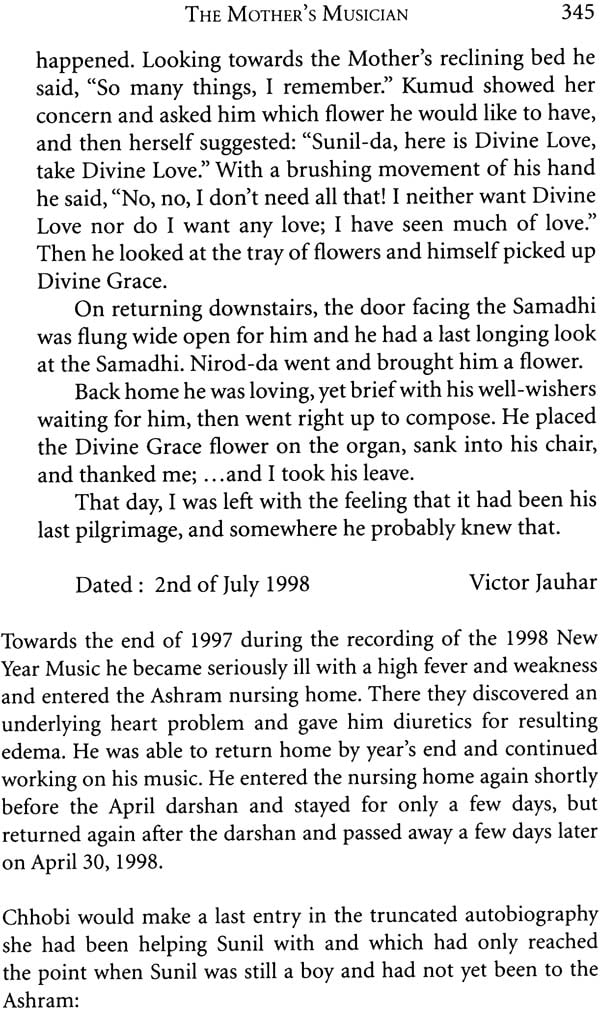 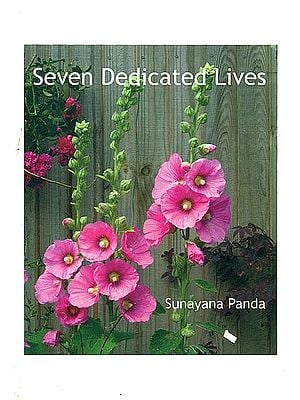 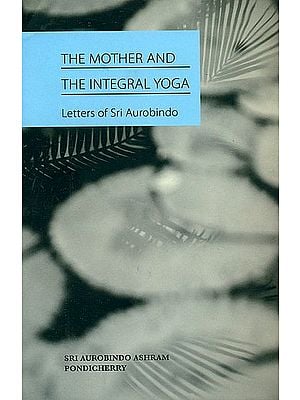 The Mother and The Integral Yoga (Letters of Sri Aurobindo)
Publisher Sri Aurobindo Ashram, Pondicherry
$11.20
$14  (20% off)

The Hidden Forces of Life (Selections from the Works of Sri Aurobindo and The Mother)
Publisher Sri Aurobindo Ashram, Pondicherry
$17

Mysteries of Death, Fate Karma and Rebirth (In the Light of the Teachings of Sri Aurobindo and the Mother
By JUGAL KISHORE MUKHERJEE
$16 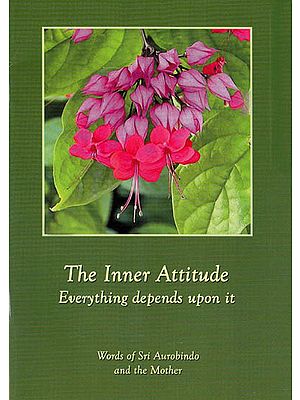 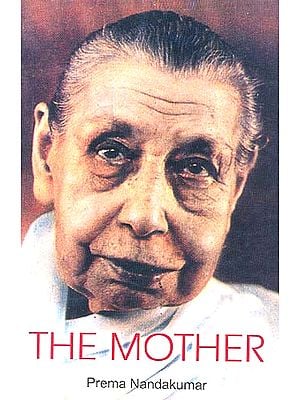