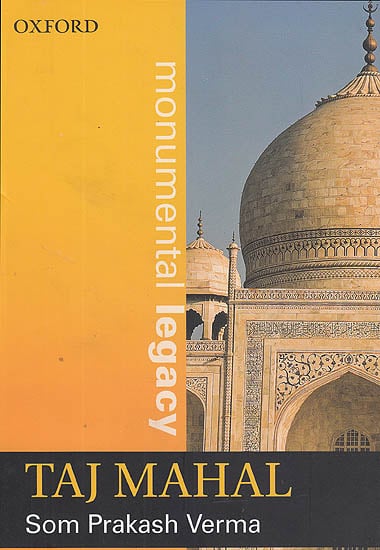 Representing the pinnacle of Mughal art and architecture, the Taj Mahal has captured both popular and aesthetic imagination. Reconstructing the architectural glory of this monument, this book chronicles why the mausoleum is a marvel.

The volume presents a graphic account of the intricacies of carvings and calligraphy as well as the overarching grand design of the Taj. From the chahar bagh pattern, water courses, tanks, and fountains to the delicate handiwork, surface ornamentation, inlay of gemstone, and pietra dura, it underscores the confluence of many styles. Also included are little-known facts on architects, workmen, expenditure, and maintenance, as well as artistic renditions of the Taj Mahal down the ages.

Part of the prestigious Monumental Legacy series, this book is replete with line drawings, visuals, and rare paintings, as well as practical tips and information. It will not only be the definitive guide for tourists but will also interest students and scholars of medieval history, art and architecture.

Time has constructed this edifice, to display thereby the Creator’s glory. Its foundation is stable like the earth, and firm alike the faith of the pious. I know not who with such magic conceived its beauty, for even the ‘inconceivable’ has taken refuge here. ‘Qudsi’, court poet of Shah Jahan (see Begley and Desai [1989: 86]).

The Taj Mahal, which has an exceptional importance for humanity and is listed as a World Heritage Site, is the subject of the present monograph. This historic monument, captured through photographs by everyone who visits it and frequently described and portrayed by artists, has surpassed any other creation in the world in the same category, with respect to its delicacy, grace of form, perfect proportions, and purely decorative architectural designs—testing Indian architects’ high idea of aesthetics.

This book is adequately equipped with academic scholarship and aims at providing general readers information about this wondrous monument, which is reckoned to attract the largest number of visitors compared to any other monument in the world. Most studies on the Taj Mahal describe historical sources, architectural forms, and style. Among these, the foremost are Ram Nath’s The Immortal Taj Mahal (1972), W.E. Begley and Z.A. Desai’s Taj Mahal: The Illuminated Tomb (1989), and Ebba Koch’s The Complete Taj Mahal and the Riverfront Gardens of Agra (2006). The other notable works include The Taj Mahal (1972) by David Caroll, Taj Mahal and the Glory of Mughal Agra (1982) by John Lall and D.N. Dube, and Architecture of Mughal India, New Cambridge History of India (1992) by Catherine B. Asher. I have little to cavil with and much to admire in their works. In shaping this small volume, I have been enlightened by the works of Begley and Desai, and Koch, despite a slight difference of opinion on a few occasions. Z.A. Desai’s scholarly contributions to the subject inspire me to devote the present monograph to his cherished memory.

I would like to thank Nadeem A. Rezavi, Mohammad Afzal Khan, Ishrat Alam, and Vinod Kumar Singh for their occasional discourses on the Taj Mahal. Special thanks are due to my friends Ghulam Mujtaba and Anis Alvi for the on-the-spot photographs. I would also like to thank Dr Imtiaz Ahmad, Director of Khuda Bakhsh O.P. Library, Patna for granting permission to publish two miniatures (Plates V and VI) from the Library’s Collection.

I express my gratitude to Devangana Desai, series editor of the Monumental Legacy series, for giving me the opportunity to share definite views on the Taj Mahal. I also thanks the entire editorial staff of the Oxford University Press for their support.

My acknowledgements will be incomplete without the mention of Smriti Prasad, Astha, and Ami, who always worked for me during my visits to Agra and its monuments.

A wonder of the world, the Taj Mahal represents the efflorescence of Mughal architecture. It is an important milestone in the evolution of Mughal style, which entered its classical phase in the time of Shah Jahan. Under him 'symmetry and uniformity of shapes', 'light and airy columns', and 'surface brilliance' emerged as the architectural ideals of the time. The Taj Mahal displays, at its best, a bilateral symmetry on both sides of its central axis. The use of multi-cusped arches and multifaceted columns, though known in Akbari architecture, became more pronounced. The baluster columns and cornices too dominated the Shahjahani architecture. An arch, foliated or cusped in its outlines, and marble arcades of engrailed arches became the distinct features of Shah Jahan's time.

The sumptuous white marble pavilions and considerably skilful parchinkari (at par with the pietra dura of Florence in excellence) were turning points in the evolution of building art, marking a change from sandstone constructions and opus sectile ornamentation. Mughal architecture was initially influenced by the Iranian style, but Indian methods and traditions began to be incorporated into it from the reign of Akbar. The seventeenth century marked a revival of the Turko-Iranian elements, which argued for elegance and surface brilliance. The Taj Mahal at Agra, the most celebrated and magnificent edifice of Shah Jahan, is the greatest triumph of the Turko-Iranian style of architecture. An admirably graceful form of the Taj Mahal is a consolidated effect of its architecture and typical style of embellishment.

The Taj Mahal is genuinely an outcome of the numerous architectonics that already existed in Indian (particularly Mughal) architecture. The chahar bagh {'fourfold garden'} surroundings with definite water courses were familiar in India since Babur's time (r. 1526-30). The slender minarets dressed in marble, which appeared at Sikandra in the gateway of Akbar's tomb, were precursors of the long tapering minarets. A strong passion for the inlay in marble (parchinkari/pietra dura) too was reflected earlier in the tomb of Itimad-ud Daula at Agra. The Timurid axioms were accepted in creating the architecture. The qualities of harmony and symmetry, the most important aspects of Timurid architecture, were deeply assimilated in Mughal buildings. The Kachpura Mosque at Agra (ca. 1530-1), a small surviving building by Humayun, characterized by tall portal (pishtaq) and high domed hall, affirms its Timurid origin. Belonging to the same period are two anonymous tombs at Delhi, at present known as the Subz Burj ('Green Tower') and the Mia Gumbad ('Blue Dome'), which were equally inspired by the Timurid tradition. The first major project of Akbar's reign, the tomb of Humayun (1562-71), too was an outcome of Timurid architectural tradition and concepts. Further, the Timurid-style gateway of Akbar's tomb, built in 1612-14, asserted the continuity of Timurid formations in Mughal tomb architecture. A strict symmetry in the plan of Humayun's mausoleum, and of other tombs as well, is indebted to Timurid concepts. And the Taj Mahal is not an exception to it.

Babur redefined the Timurids' love of gardens. He designed them on a grid, being divided by a broad walkways and water courses to form a chahar bagh. This formal layout of the garden remodelled the urban landscape integrated with architecture. Babur included baths (hammam) in his garden design. At Agra, he laid out the hasht bahisht garden, which served as a court and residence.

The garden design attached to the funeral architecture (the structures made on burial places are referred to as 'funeral structure maqbara or sepulchre') was exclusive. The positioning of the tomb in the centre of a formal garden was a remarkable innovation of the Mughals. The tombs of Humayun, Akbar, Itimad-ud Daula, and Jahangir were situated at the centre of the classical Mughal form of chahar bagh gardens with broad walkways, water channels, and tanks with fountains. The formal garden at the Taj Mahal, a variant of the chahar bagh pattern, presents the riverfront garden in its most impressive form. 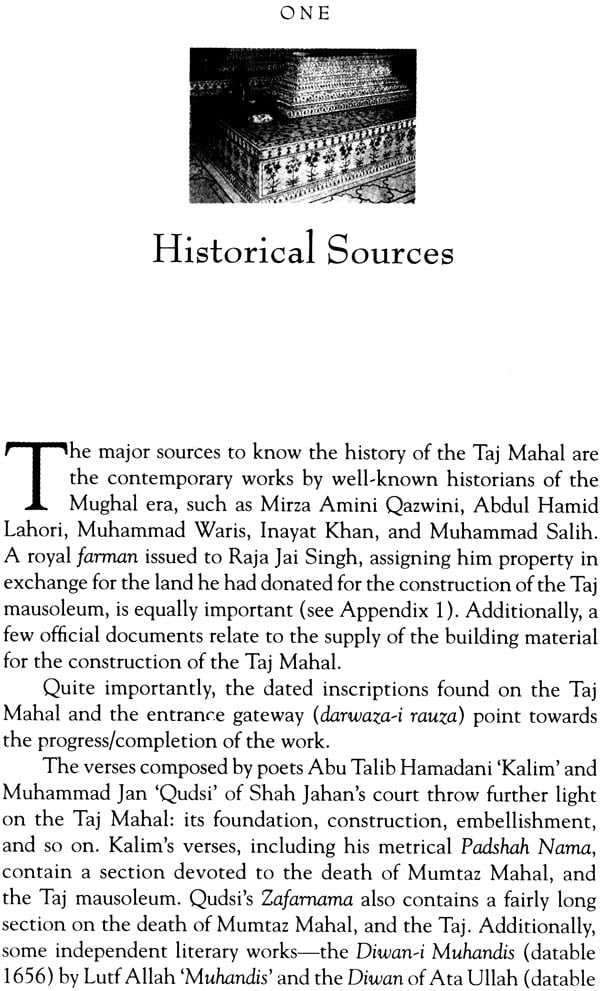 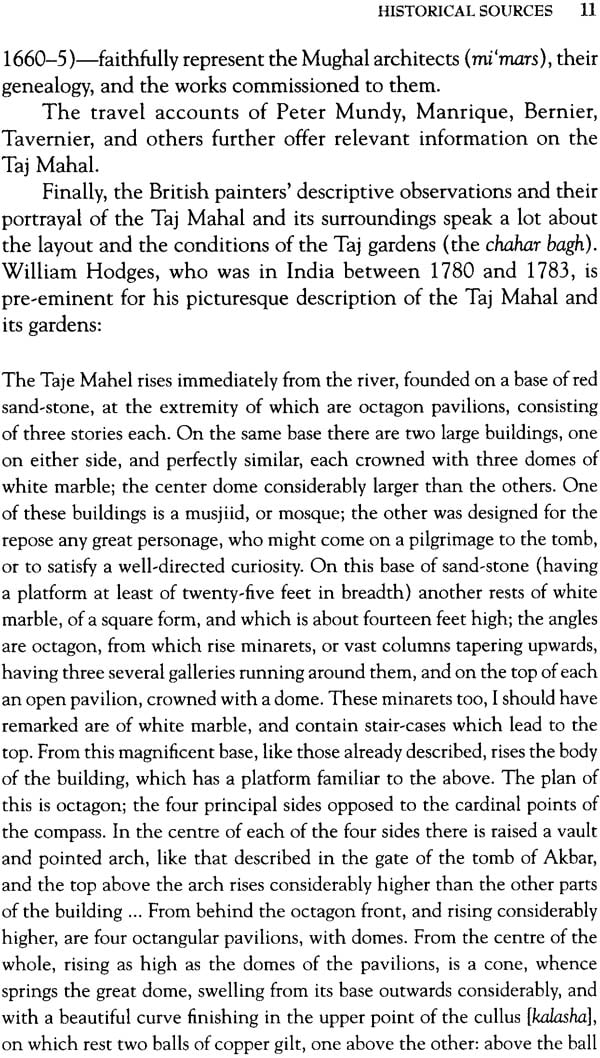 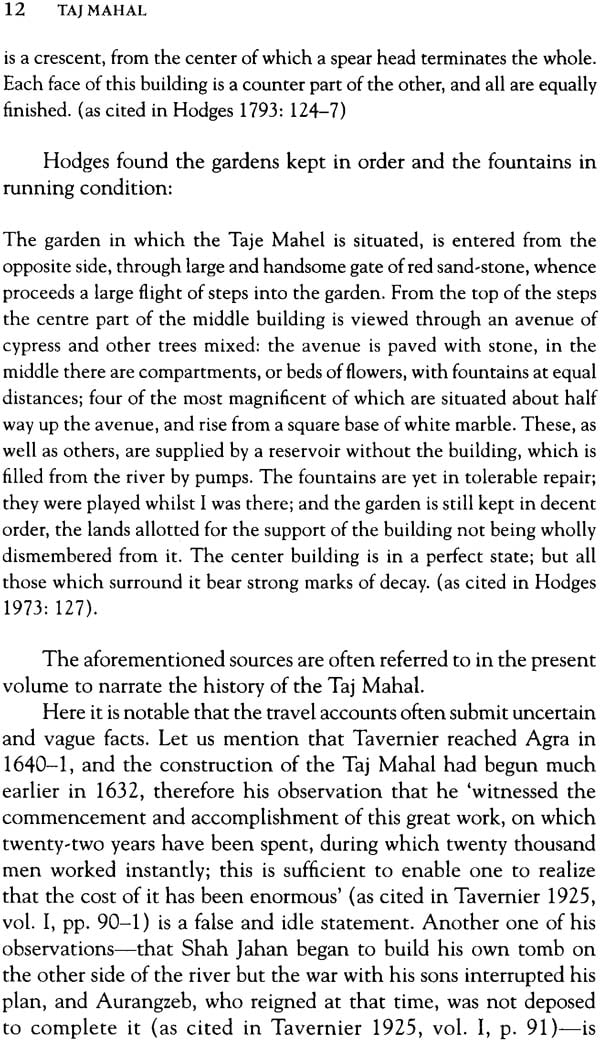 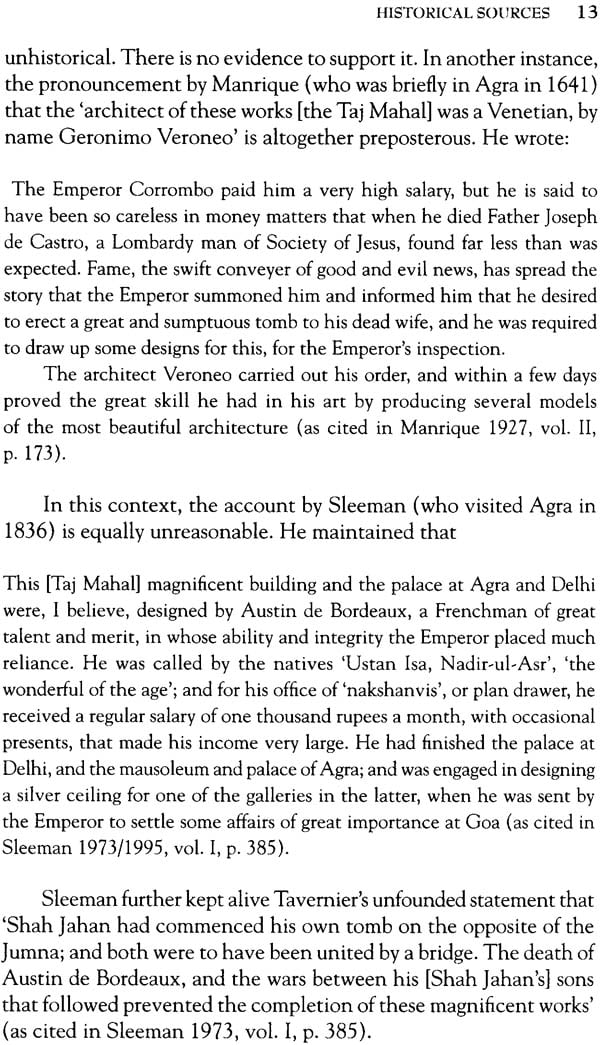 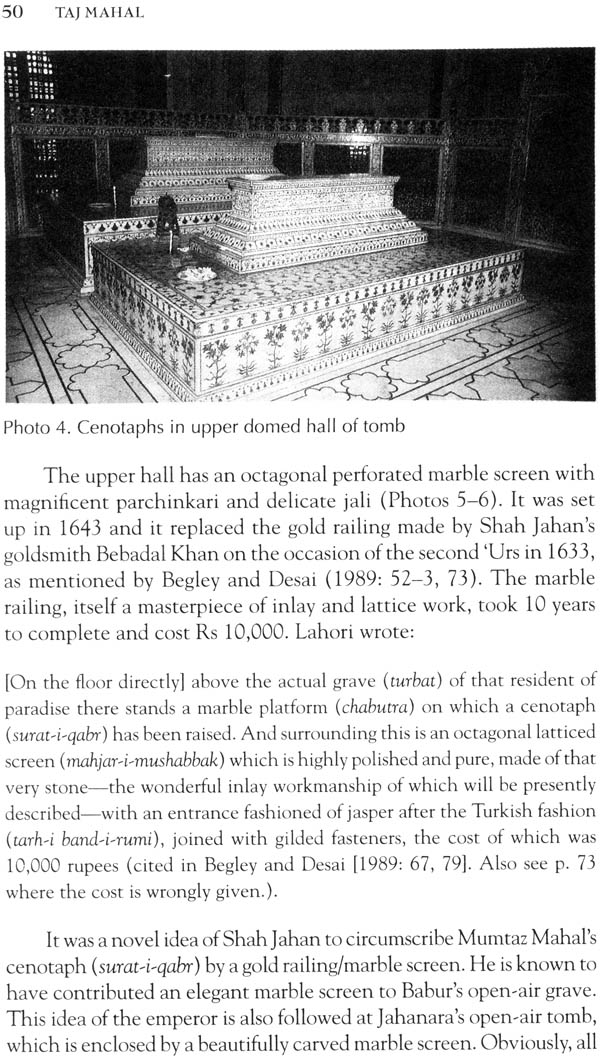 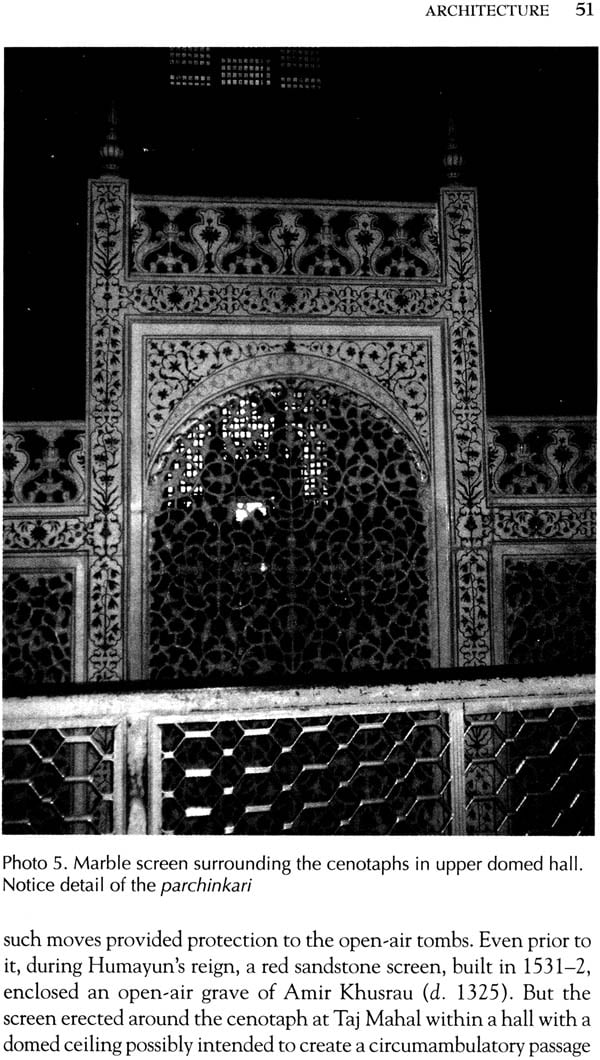 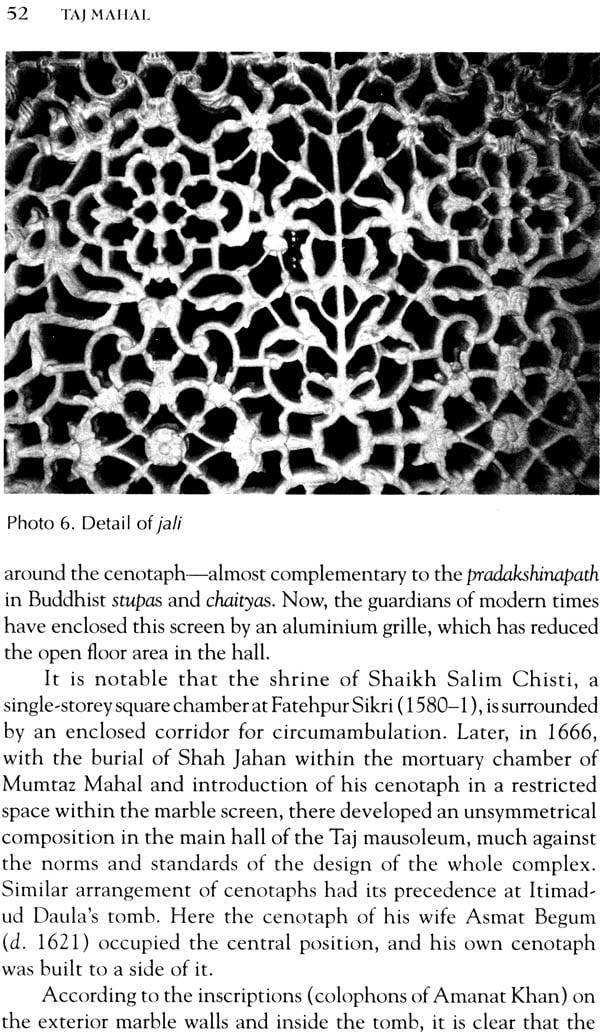 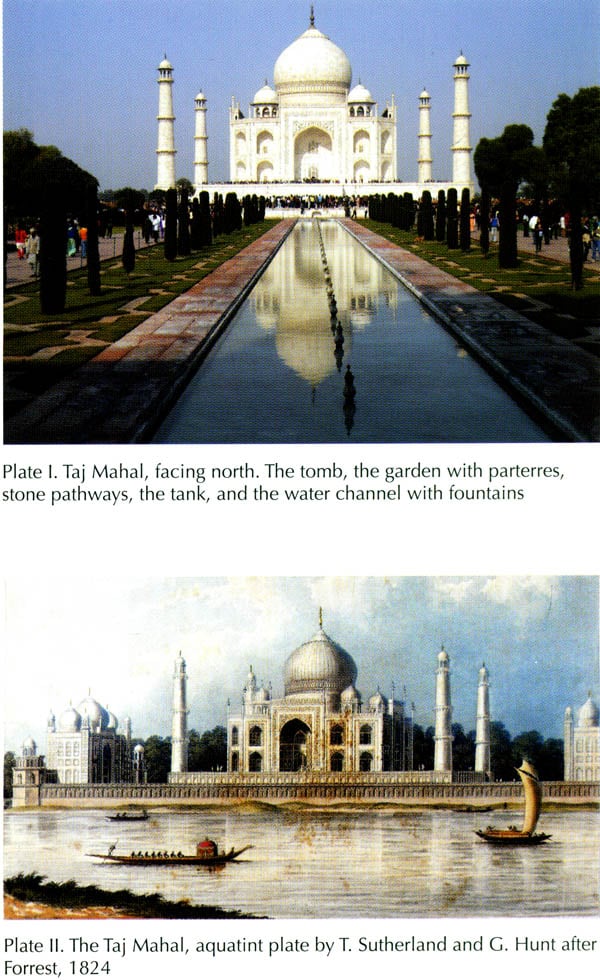 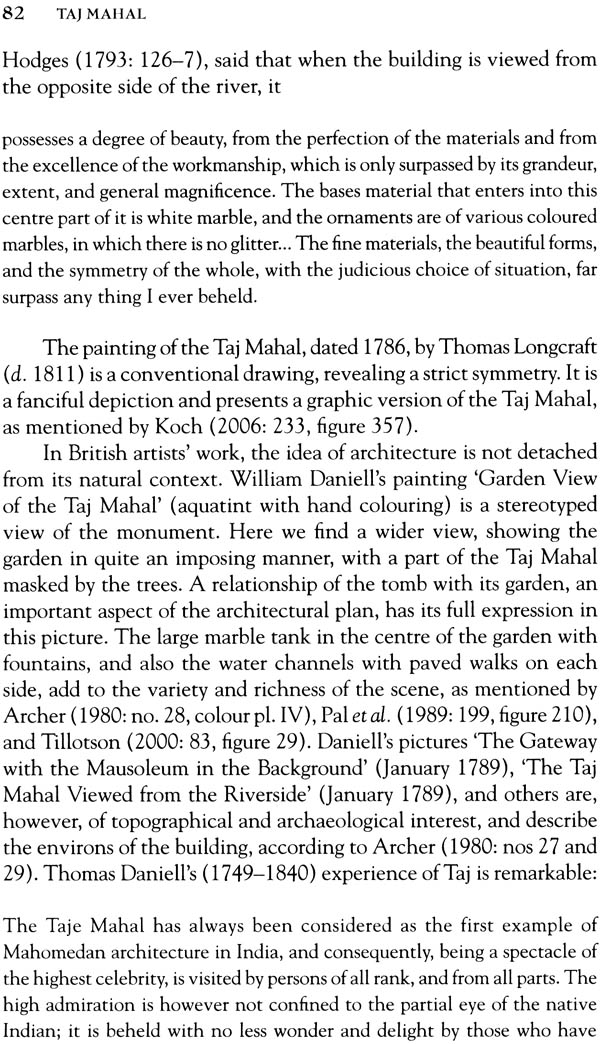 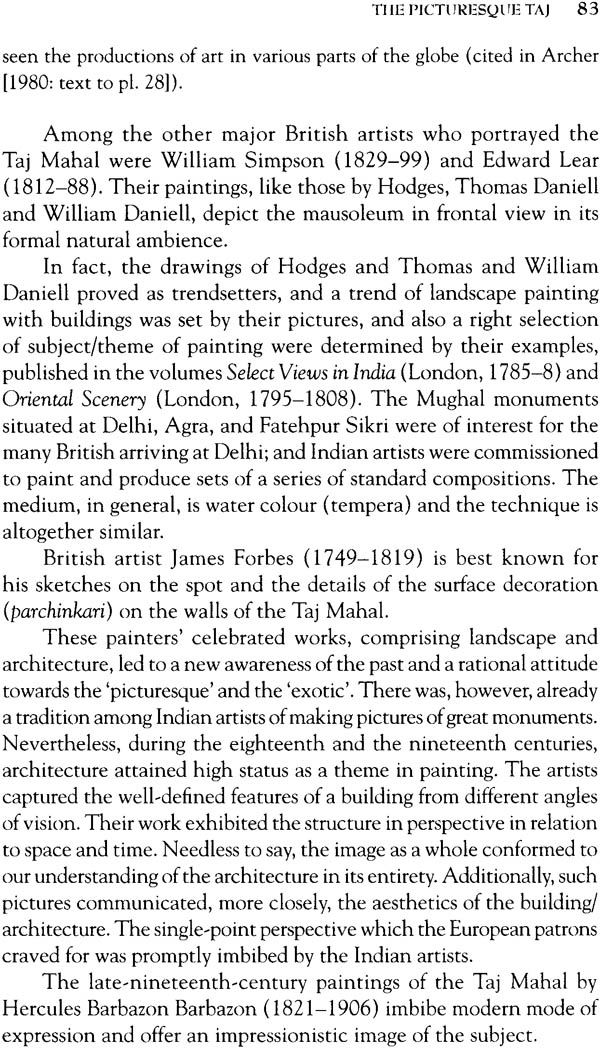 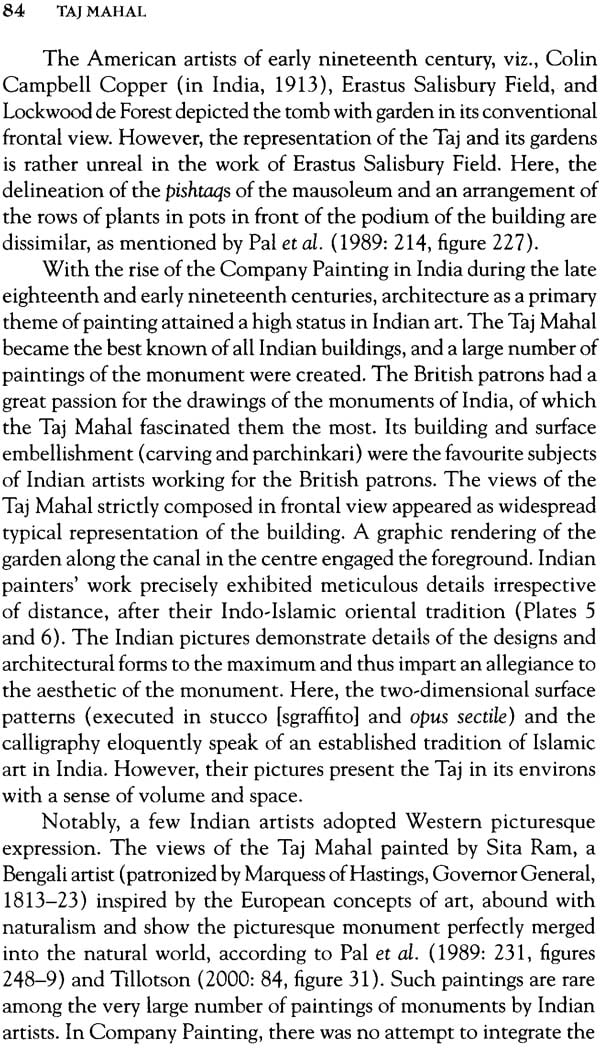 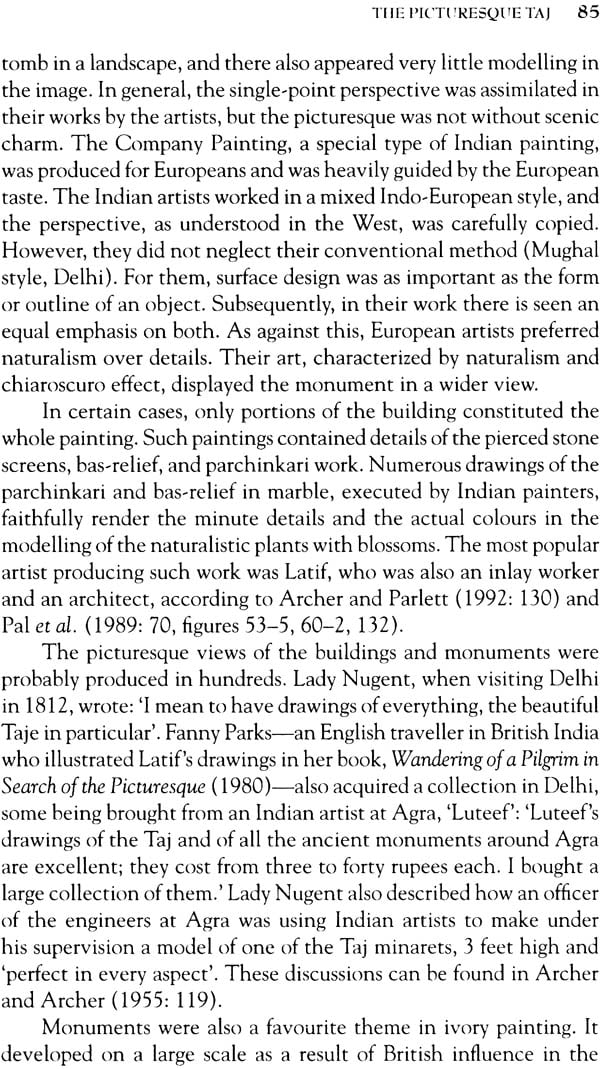 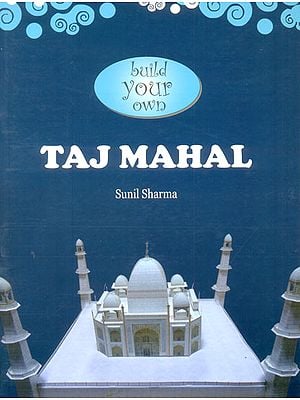 Agra The Architectural Heritage
By Lucy Peck
$30
Sold Out

Islamic Tombs in India (The Iconography and Genesis of Their Design)
By Fredrick W. Bunce
$76
FREE Delivery

Masterpieces of Traditional Indian Architecture
By Satish Grover
$47
Sold Out 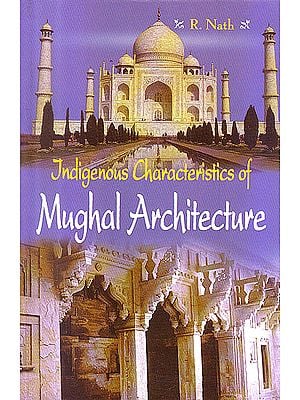 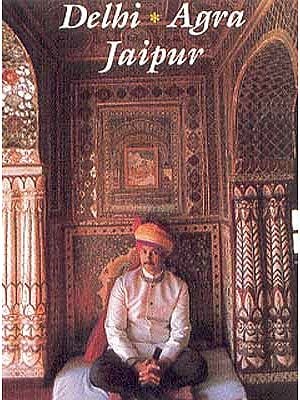