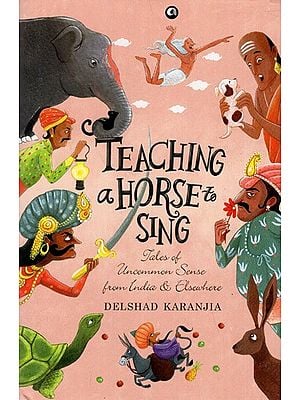 Akbar and Birbal, Krishnadeva Raya and Tenali Raman, Vikram and Vetal, Mullah Nasruddin .... The exploits of these legendary wits, rulers, wise men, riddlers, and tricksters are familiar to every Indian who loves a good story and a good laugh . In Teaching a Horse to Sing: Tales of Uncommon Sense from India and Elsewhere, Delshad Karanjia retells the best-known stories featuring these characters and a few others from around the world. This volume is an eclectic collection of 150 tales from across the world. Teaching a Horse to Sing brings together some of the timeless themes in storytelling like the difference between good and evil, and the trials of day-to-day life. Equally humourous and wise, this collection is an entertaining and instructive read for all ages.

First-time author Delshad Karanjia has worked as a journalist for over four decades across several continents, beginning with the Times Group in Mumbai. In the UK, she freelanced as a copy editor with the Daily Telegraph, Sunday Times, and BBC Publications, as a reporter/ newsreader for BBC Local Radio, and as a researcher/ producer for the Channel 4 network. In the US, she worked as a copy editor at the Houston Chronicle, and subsequently as a writer/editor for the oil company Saudi Aramco in Saudi Arabia. Now settled in Pune, she continues to edit, write, and teach.

Until recently, my passion for stories had been strictly one-sided, obsessed with reading rather than writing them. It was only after I was approached by Aleph Book Company with a proposal to retell stories of wit and wisdom of my choosing that I grabbed this opportunity to spin a few yarns of my own.

Coming from a family of bookworms—my parents were journalists closely connected with Indian cinema—I grew up surrounded by literature. Our spacious flat in Bombay's Chowpatty had several crammed bookcases in various rooms, and books and magazines were piled high on all available tables, desks, and shelves. The entire family—my grandmother, parents, siblings, and I—had a favourite chair or sofa in our large drawing room, where each of us could be found reading a book or magazine in pin-drop silence whenever we were at home. My mother had accounts with two or three major bookshops in the city, and several fresh-smelling books and glossy foreign magazines were delivered to the house every month.

There was never a shortage of reading material, and it was here that my fascination with stories began. Words on a page conjured up magical images, and enchanting stories whisked me off on thrilling adventures in faraway lands. It was here that I read and reread fairy tales, fables, and novels in vividly illustrated books. Being a sickly child, these exotic and exciting stories in beautifully bound hardbacks provided comfort, distraction, and some relief during various childhood illnesses. I began to realize that although truth may be stranger than fiction, fiction was invariably more fascinating than truth. With human beings always needing to share anecdotes and experiences, storytelling has been a powerful force in every culture known to man. Long before writing was invented, it was through telling stories that people were able to quickly pass on information to others. To quote author Hugh MacLeod: `Stories are not simply nice things to have; they are essential survival tools.'

As an almost natural consequence of this innate need to share information with future generations, stories of knowledge and insight flourished in cultures across the world. Wisdom, it is said, is a treasury that grows as you give it away, which explains why googling 'wit and wisdom' yielded more than fourteen million results: a profusion of fables, anecdotes, mythology, homespun philosophy, speeches, witticisms, deft definitions, and quotable quotes from across the globe and spanning the centuries. But the brief from my publisher was specific—to retell popular tales of wit and wisdom, so this feast of riches has perforce been pared down to three courses, beginning with the wise follies of Mullah Nasruddin, moving on to the enduring legends surrounding Emperor Akbar and his adviser Birbal, and rounding off with fables and folklore from around the world.

It came as no surprise to find a common thread linking these human experiences and behaviour, regardless of the origin of the tale. Storytellers of old, recognizing a good yarn when they came across one, would merely substitute the central character with a home-grown hero in their retellings. Hence, we have Mullah Nasruddin or Birbal, or some other smart aleck, facing identical dilemmas in variations of the same folk tale, the only difference being that the setting shifts to some other part of the world.

Sifting through this glut of information, the challenge was tantamount to filtering, remixing, and rebottling vintage wine while retaining its flavour and piquancy. Storytellers through the ages often used foolishness as a stepping stone to sound sense, as demonstrated in hundreds of anecdotes centred on the antics of wise fools and foolish knaves. In addition, love, jealousy, pride, miserliness, competitiveness, misunderstandings, and differences of opinion continue to be the leitmotifs of compelling stories about the human condition, regardless of their origin or age.

The forerunner of many a wise fool, Mullah Nasruddin's daft-yet-crafty escapades, dating back to the thirteenth century, illustrate that there can be traces of canniness in the most foolish of us and much silliness in the cleverest of us. In the mullah, we have a protagonist capable of being either a critical thinker or a buffoon when it suits him, using his gift of the gab to put a positive slant on the mishaps that befall him. Like many a present-day politician, the attention-seeking mullah permitted everyone to ask him questions, but didn't allow anyone to question his answers. Behind the wry humour and apparent foolishness, there are down-to-earth life lessons to be learned from the mullah's folksy insights and sharp tongue.

Although historical records make no mention of the legendary interactions between Emperor Akbar and his trusted aide Birbal, the stories have flourished, possibly because there is a touch of schadenfreude in discovering that crowned heads are not necessarily clever, and that a humble adviser, blessed with native intelligence and wit, can get the better of a mighty monarch. 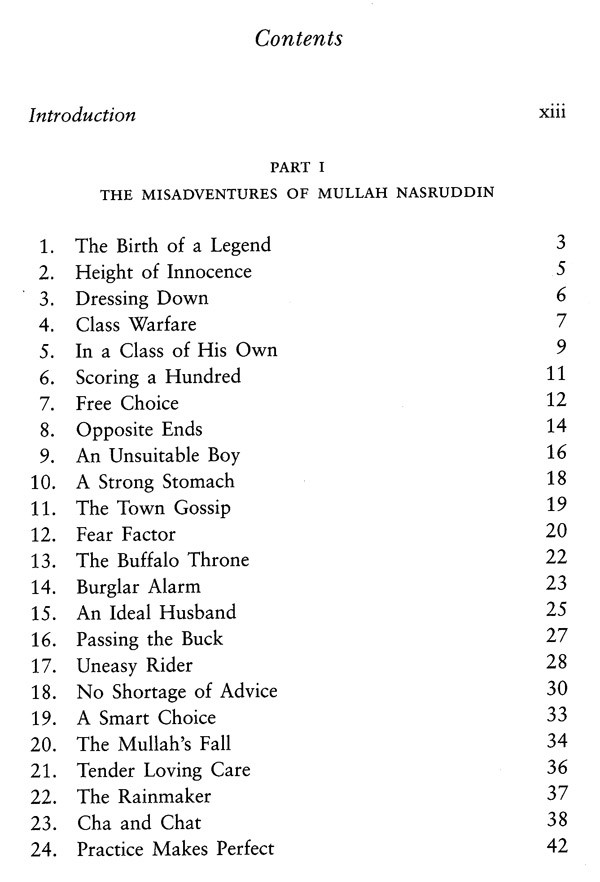 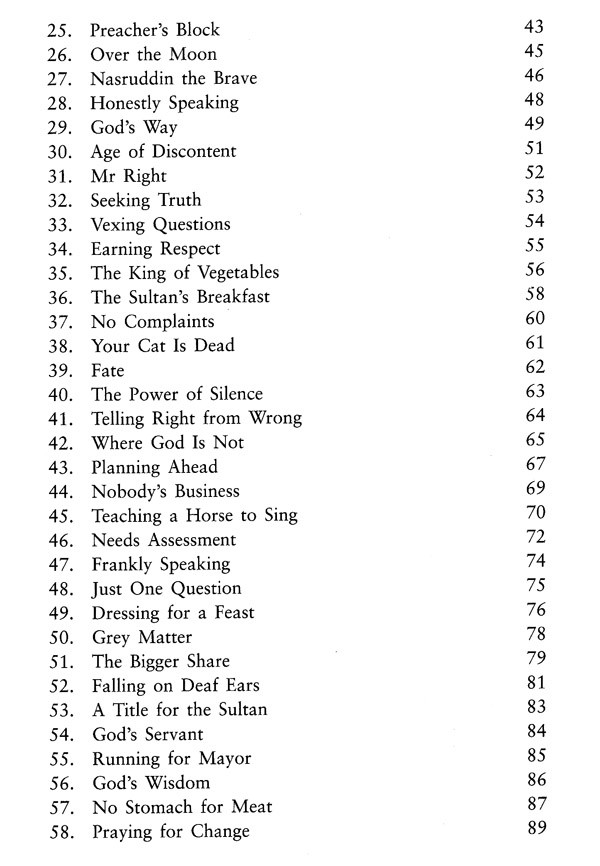 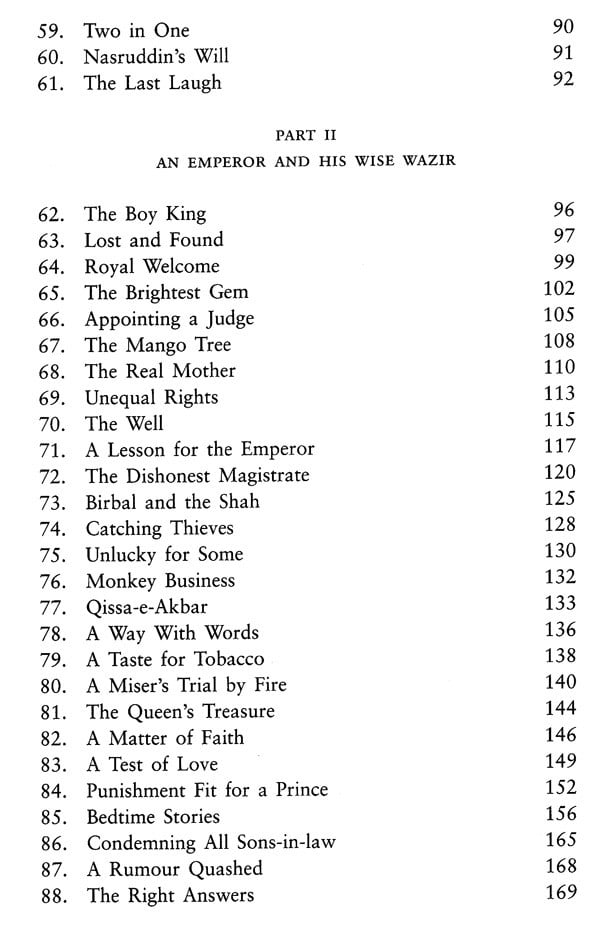 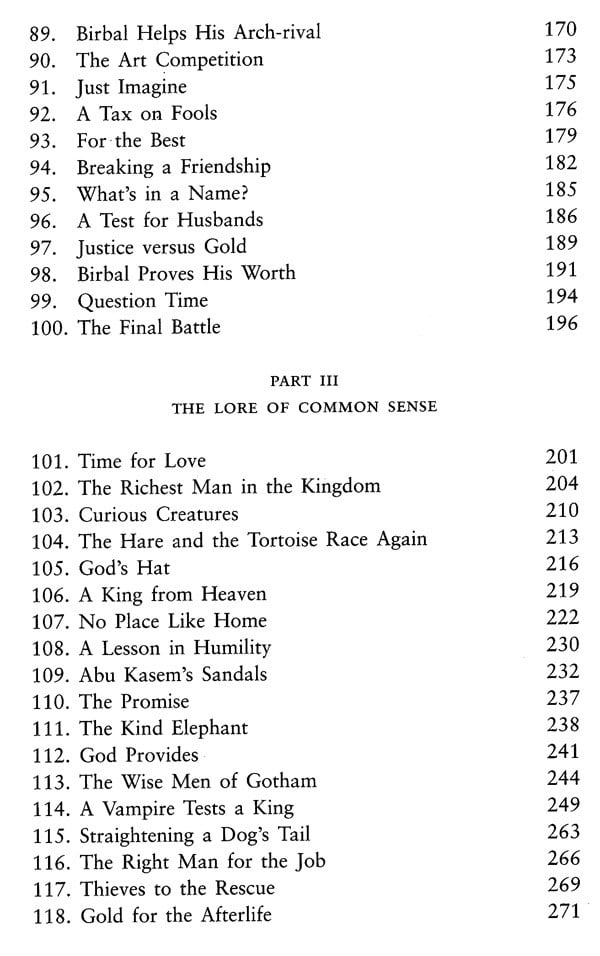 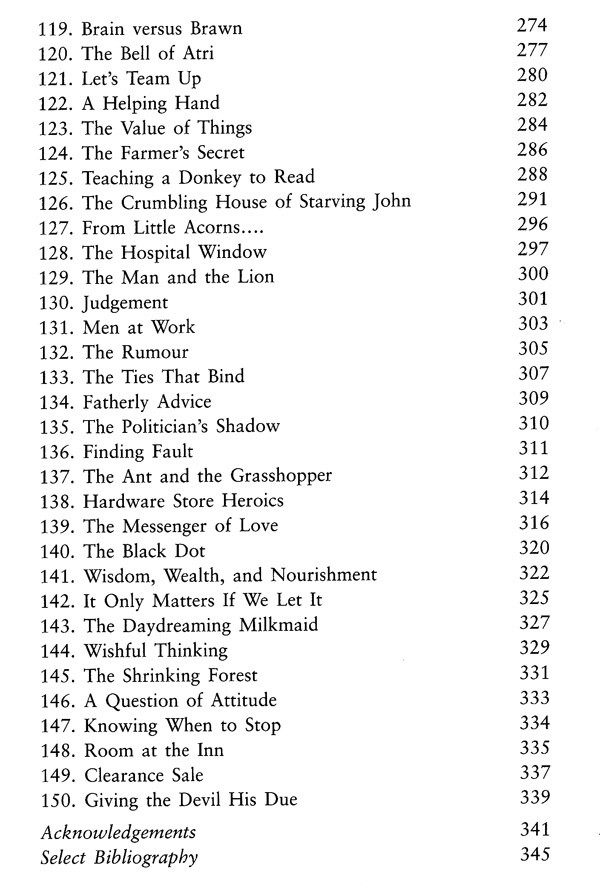 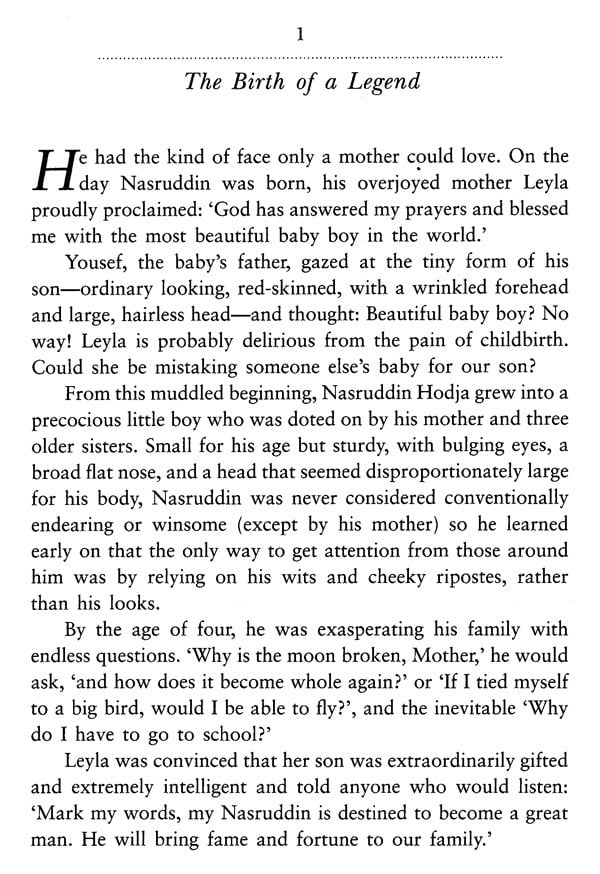 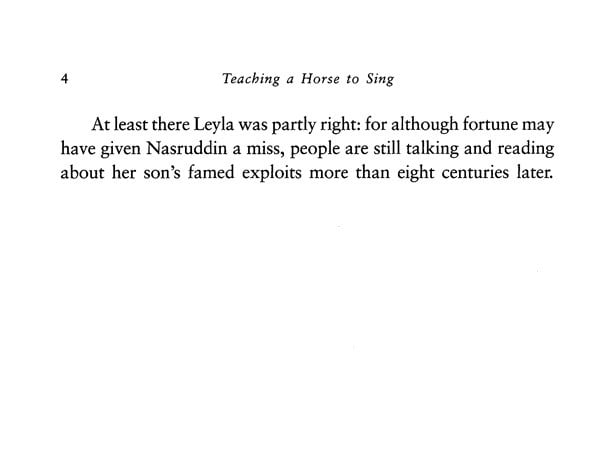 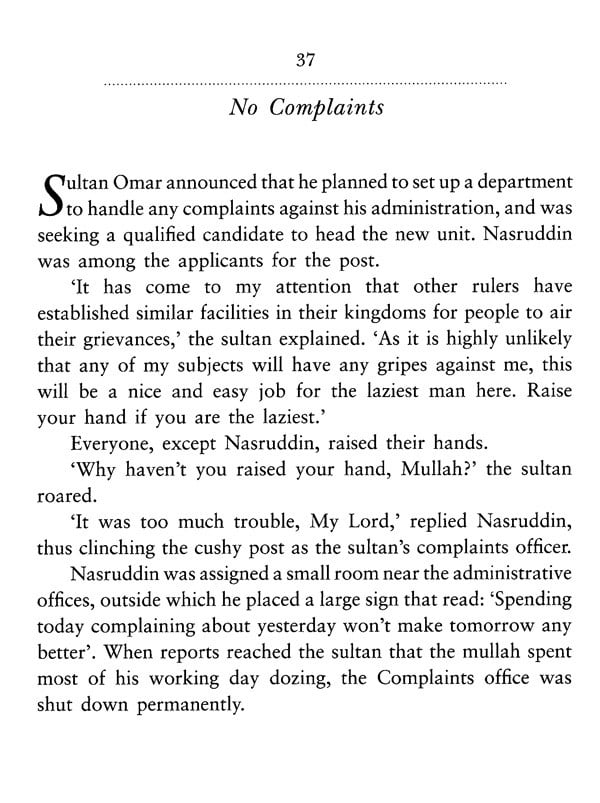 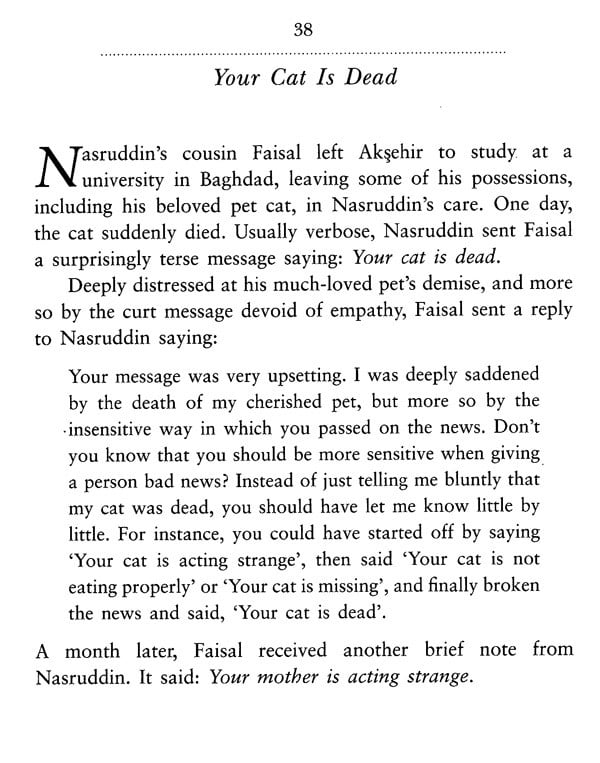 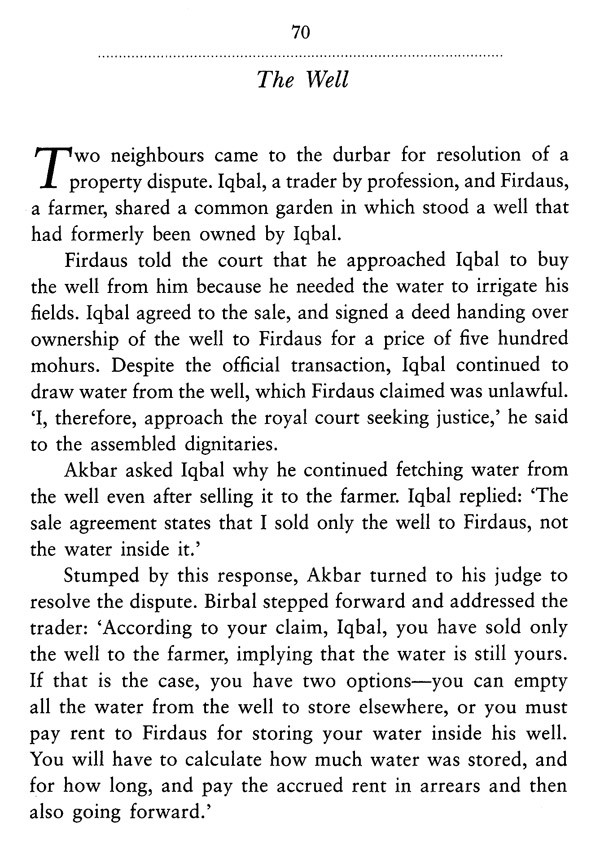 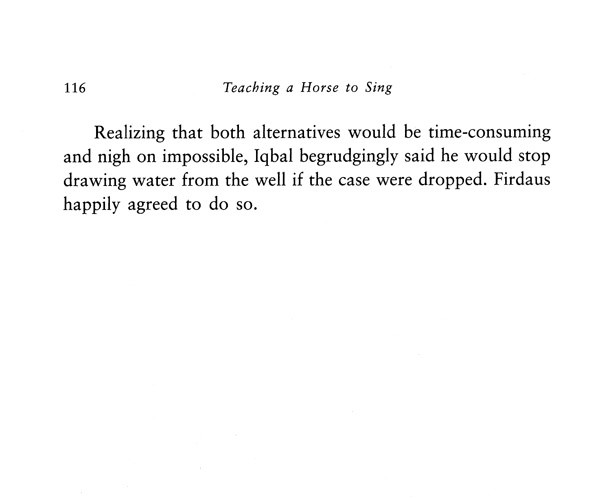 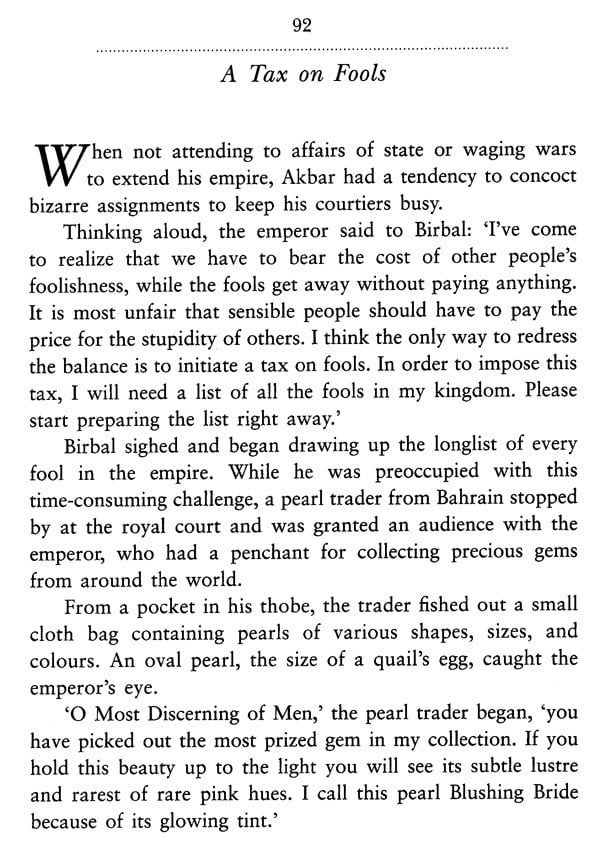 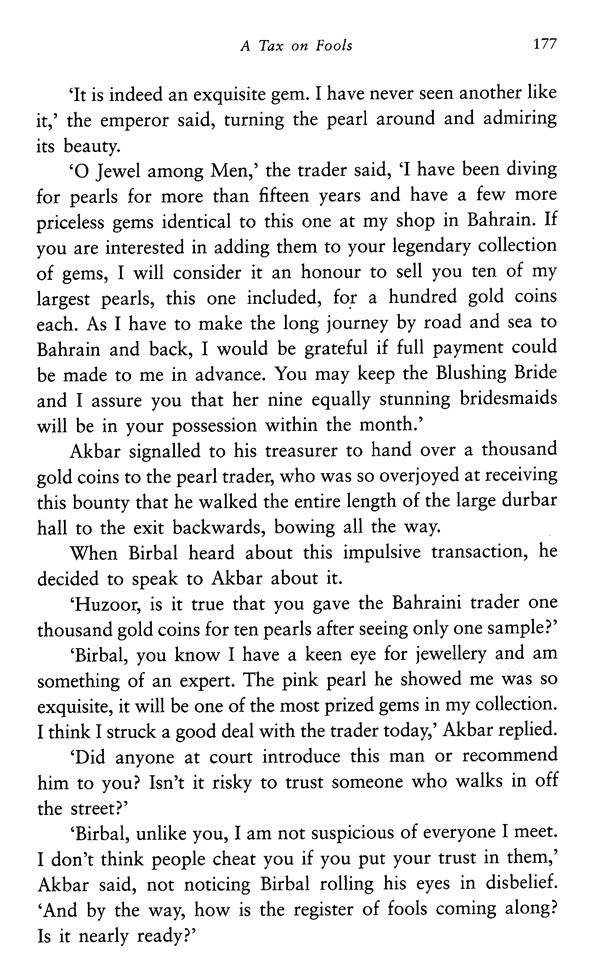 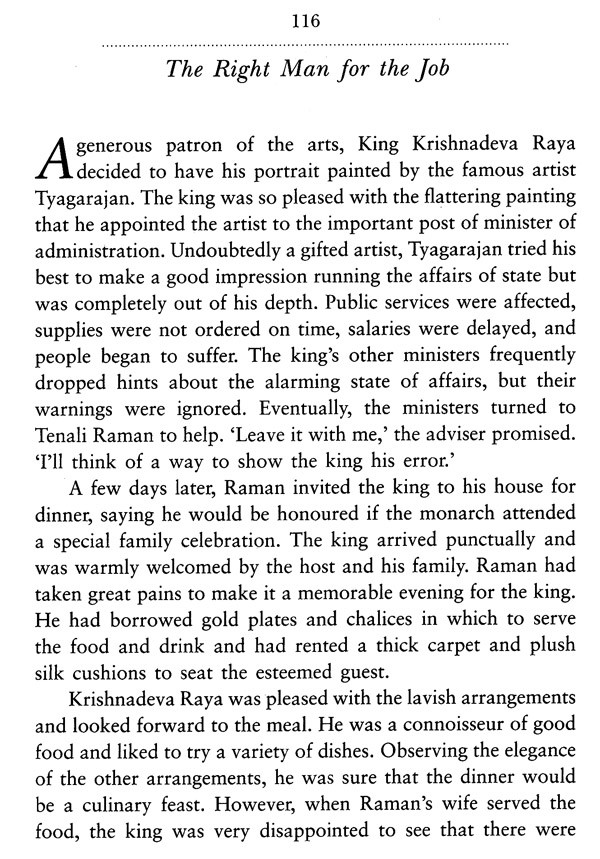 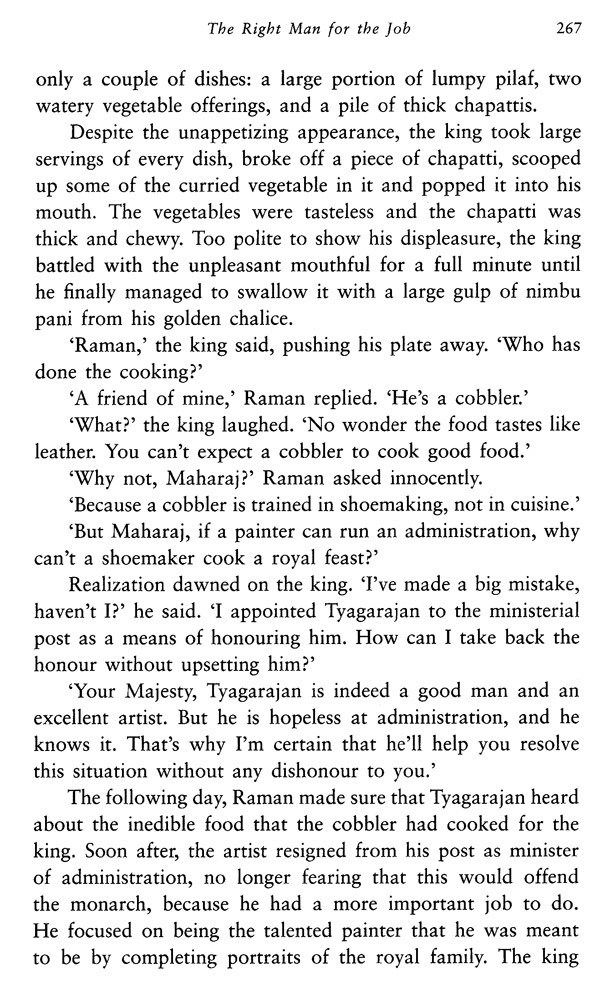