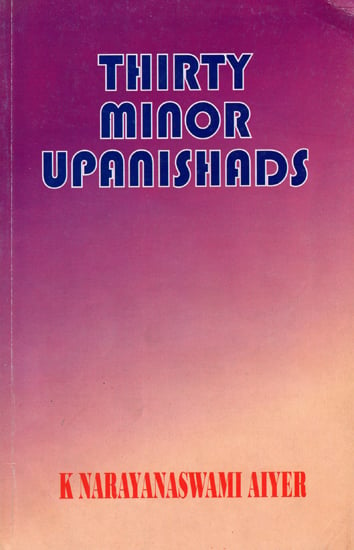 For the first time it is, I believe, that the English translation of so many as 30 Upanisads is being put forth before the public in a collected form. Among the, Hindu Scriptures, the Vedas hold the pre-eminent place. The Upanisads which are culled from the Aranyaka-portions of the Vedas So-called because they were read in the Aranya (forest) after the learner had given up the life of the world-. are regarded as the Vedanta, or the end or final crown of the Vedas. Vedanta is also the end of all knowledge, since the word Vedas means according to its derivation ‘knowledge’. Rightly were the Upanisads so considered, since their knowledge led a person to Atma, the goal of life. The other portion of the Vedas, viz., Samhitds and Brdhmanas, conferred upon a man, if he should conform to the requisite conditions, the mastery of the Universe only which is certainly inferior to Atma. It is these Upanisads that to the western philosopher Schopenhauer were the "Solace of life".

There are now extant, in all, 108 Upanisads, of which the principal or major 12 Upanisads commented upon by Sri Sankaracdrya and others were translated into English by Dr. Roer and Raja Rajendra Lal Mitra and re-translated by Max Miller in his "Sacred Books of the East", together with one other Upanisad called Maitrayani. Of the rest, 95 in number, two or three Upanisads have appeared in English up to now, but never so many as are here presented to the public, so far as I am aware.

Many years ago, the late Sundara Sastri, a good Sanskrit Scholar and myself worked together to put into English garb the Upanisads that had not been attempted before, and succeeded in publishing most of those which are here gathered in the monthly issues of The Theosophist. The Karmic agents willed that my late co-worker should abandoned his physical garment at a premature age. Then I resolved upon throwing up my worldly business of pleading the cause of clients before the bench for that of pleading the cause of God before the public. The incessant travel in that cause since then for over 18 years from place to place in all parts of India left me no leisure until now to republish all the above translations in a book form. But when this year a little rest was afforded me, I was able to revise them as well as add a few more. I am conscious of the many faults from which this book suffers and have no other hope in it than that it will serve as a piece of pioneer work, which may induce real Yogins and scholars to come into the field and bring out a better translation.

The Order of the Upanisads

The Upanisads translated have been classified under the headings of (1) Vedanta, (2) Physiology, (3) Mantra, (4) Sannydsa and (5) Yoga. But these are not hard and fast divisions. For instance in the Sannydsa and Yoga Upanisads, mantras also are given. But in the Mantric Upanisads alone are given.

The Upanisads that come under the headings of Vedanta and Yoga are the most important. But it is the latter Upanisads that are most occult in their character, since it is they that give clues to the mysterious forces located in nature and man, as well as to the ways by which they may be conquered. With reference to Vedanta, the ancient teachers thereof have rightly ordained that none has the right to enter upon a study of it unless he has mastered to a slight degree at least the Sddhana-Catustaya, or four means of salvation. He should not only be convinced in theory of the fact that Atma is the only Reality, and all else are but the ephemeral things of the world, but he should also have outgrown in practice the craving for such transitory worldly things : besides he should have developed a fair mastery over the body and the mind. A non-compliance with these precedent conditions leads men into many anomalies. The orthodox and the clever without any practice are placed in a bad predicament through a study of these Upanisads. In such Upanisads as Maitreya and others, pilgrimages to holy places, the rituals of the Hindus, ceremonial impurities at the time of birth and death, Mantras, etc., are made light of. To the orthodox that are blind and strict observers of rites and ceremonies, statements like these give a rude shock. Hence Upanisads are not meant for persons of this stamp. Nor are they intended for mere intellectual people who have no knowledge of practice about them, and are immersed in the things of the world. Some of us are aware of the manner in which men with brains alone have made a travesty of the doctrine of Maya. Not a few clever but unprincipled persons actually endeavor to justify arguments of all kinds of dissipations and wrong conduct by the assertion that it is all Maya. The old Rsi were fully aware of the fact that Veddnia would be desecrated by those that had not complied with its precedent conditions. Only when the desires and the self are overcome and the heart is made pure, or as Upanisadic writers put it, the heart-knot is broken, only then the Atma in the heart will be truly realised: and then it is that the Atma in all universe is realised also, the universe being then seen as Maya. But so long as the Atma in the heart is not realised through living the life, the universe will not be realised as Mayda, and "God everywhere" will be but in words.

One special point worthy of notice in the Upanisads is that all the knowledge bearing upon a subject is not put forward in one and the same place. We have to wade through a mass of materials and a number of Upanisads, ere we can have a connected view of a subject. In modern days when a subject is taken up, all the available information is given in one place in a systematic manner. But not so in the Upanisads. Take the subject of Pranas which refer to life itself. In one Upanisad, one piece of information is given, another in another and so on. And unless we read them all together and reconcile the seemingly discrepant statements, we cannot have a complete and clear knowledge of the subject. This process was adopted by the Rsis, probably because they wanted to draw out thereby the intellectual and spiritual faculties latent in the disciple, and not to make him a mere automation. In these days when knowledge is presented in a well-assimilated form, it is no doubt taken up easily but it does not evoke the latent reasoning power so much. When therefore, the disciple went in the ancient days to the teacher for the solution of a difficulty, having been unable to find it himself after hard thinking, it was understood easily and permanently because of the previous preparation of the mind, and was also reverently appreciated as a boon and godsend, because of the difficulty previously experienced. The function of the teacher was not only to explain the difficult points to the taught, but also to make him realize those things of which understanding was sought. As an illustration, we might take the case of the soul. The Guru not only explained the difficult passages of points relating to the soul, but also made the disciple leave the body or bodies and realize himself as the soul. As we cannot get such Gurus in the outer world now a days, the only thing left to do instead is to secure the publication of simple treatises on matters of Vedanta and Yoga for the benefit of the public. I hope, I shall before long be able to make a start in this direction.

In studying the Upanisads on Vedanta and Yoga, we find certain peculiarities which throw a light on their greatness. Both of them lay stress upon certain centres in the human body for development. The 12 major Upanisads as well as the Vedanta, Upanisads herein published deal with the heart and the heart alone; while the Yoga Upanisads treat of many centres including the heart. For the purpose of simplification, all the centres may be divided under the main headings of head, heart and the portion of the body from the navel downwards.

But why? The key which will unlock these secrets seems to be this. All religions postulate that the real man is the soul, and that the soul has to reach God. Christianity states that God created the soul in His own image and that the soul has to rise to the full stature of God in order to reach Him. Hinduism says that Jivatma (the human soul) is an Amsa or portion of Paramatma, or God, which is to eventually unfold the powers of God, and compares it with a ray of the sun of God, or a spark out of the fire of God. In all religions, there is an unanimity of opinion that the soul is a likeness of God, having God’s powers in latency to be unfolded hereafter. Let us therefore first understand the attributed of God. He is said to have omnipresence, omniscience and omnipotence. Hinduism translates these ideas into Sat, Cit and Ananda. They are eternal existence, infinite knowledge, and unlimited power. The soul identifying itself with the body thinks it lives for the life-term of the body only; cooped up by the brain, it imagines, it has only the knowledge circumscribed by the brain; carried away by the pleasures of the senses, it whirls about in the midst of them as if they constituted the Real Bliss. But when it wakes up from the dream of the lower things of the body and glances upwards to the higher world of Spirit, it discovers its delusions and finds itself to be of the same nature as the God above, who is eternal, all-knowing and all- powerful. And this discovery has to be made by each soul in the human body, in which it is functioning, through the three main centres of head, heart and navel. Through the heart, it cuts the heart-knot and realises its all-pervading character when it realises its eternity of existence; through the brain, it rises beyond it through its highest seat, viz., Sahasrara which corresponds to the pineal gland in the physical body, and obtains its omniscience; through the nuvel, according to the Upanisads- It obtains a mastery over that mysterious force called Kundalini which is located therein, and which confers upon it an unlimited power- that force being mastered only when a man arises above Kama or passion. Psychologists tell us that desires when conquered lead to the development of will. When will is developed to a great degree, naturally great power, or omnipotence, ensues : our statement is that Kundalini when conquered leads to unlimited powers and perfections, or Siddhis like Anima, etc., and that Kundalini can only be conquered through rising above the desires of the senses. 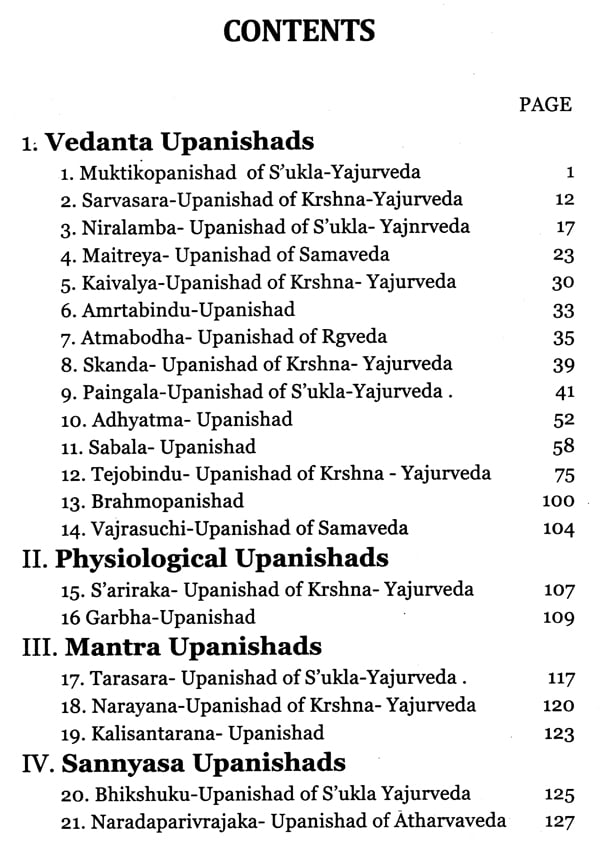 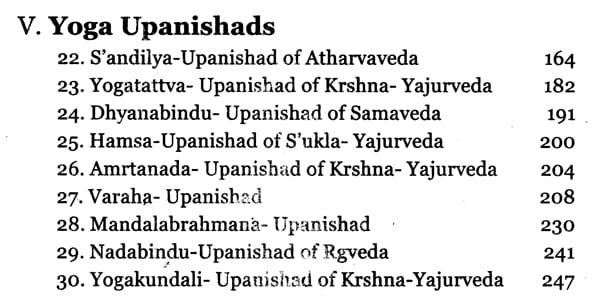 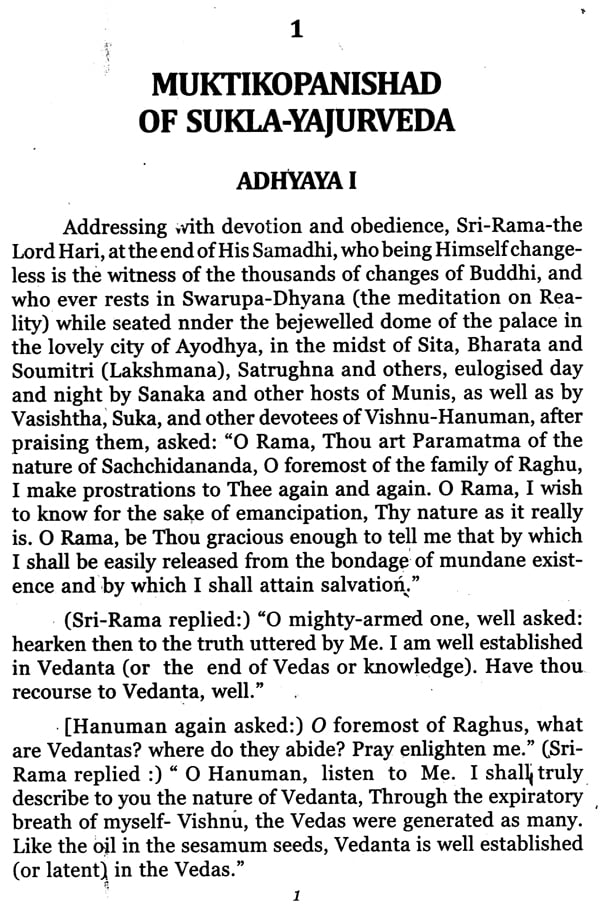 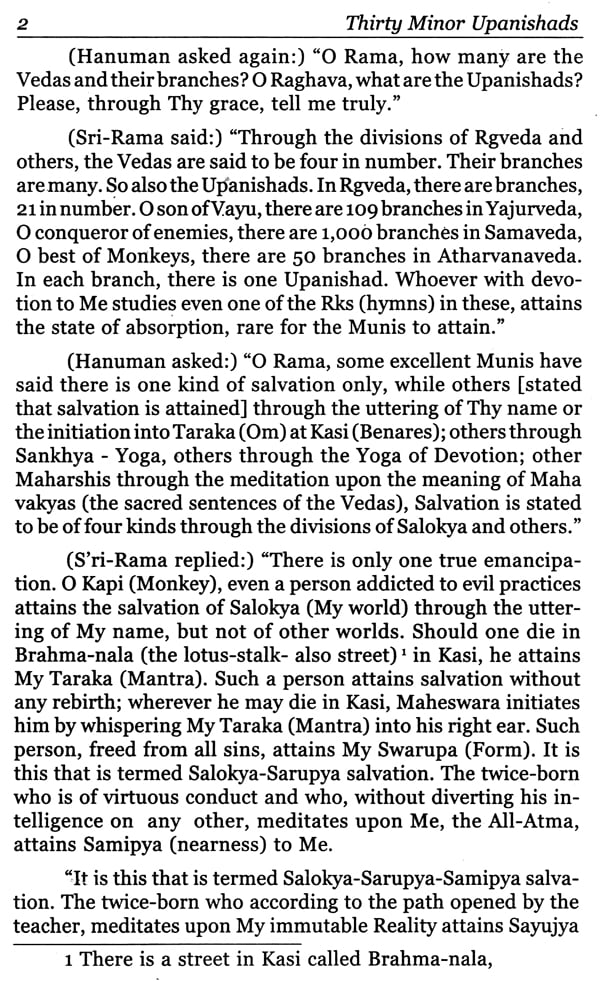 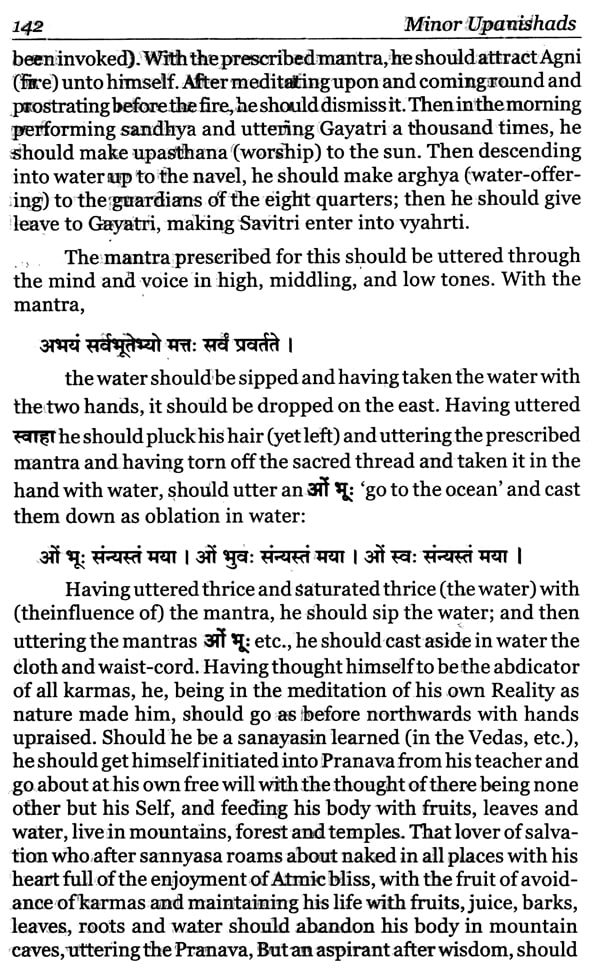 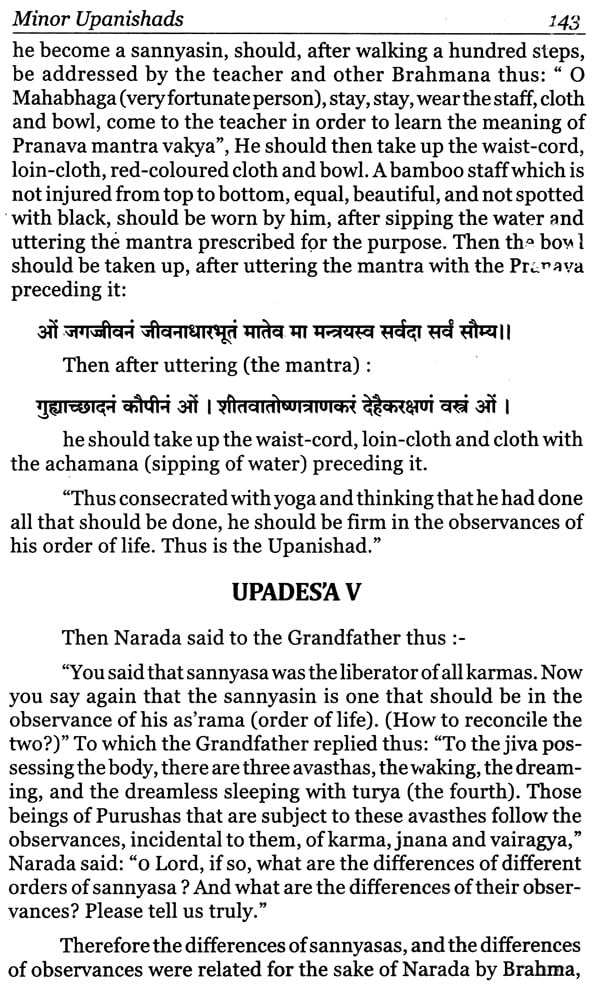 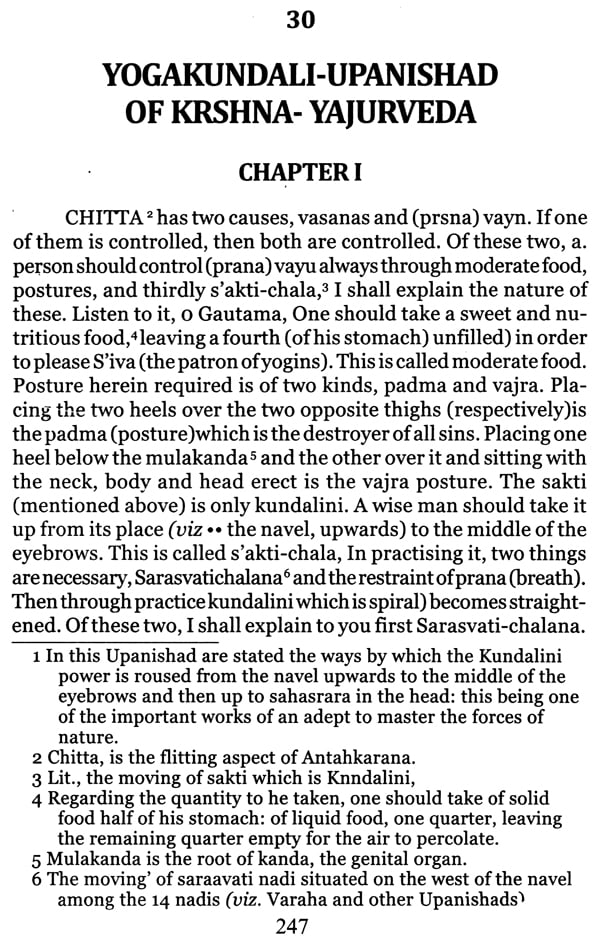 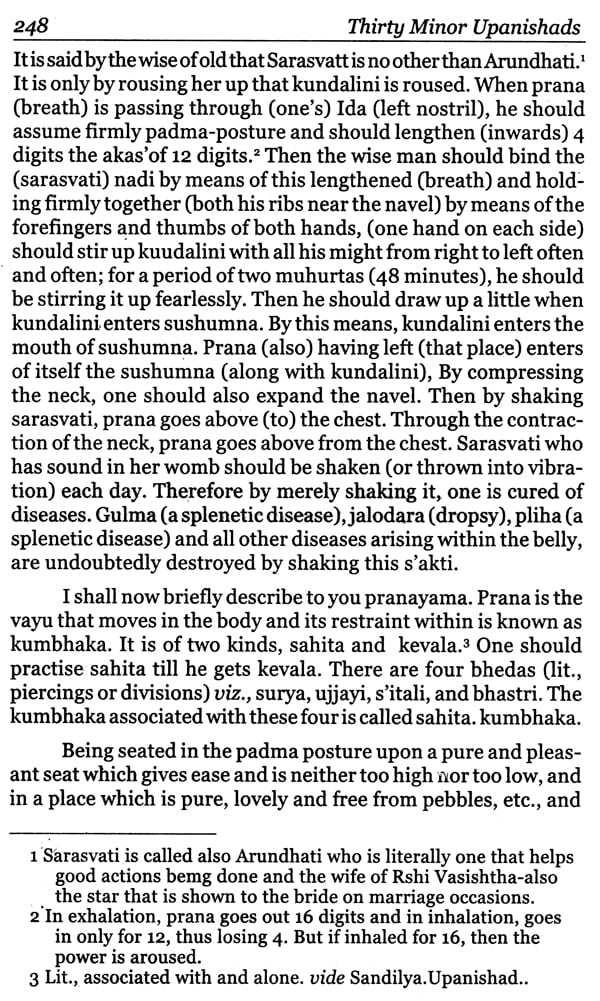 The Samnyasa Upanisad’s (On Renunciation), Based on the Commentary of Upanisad Brahmayogin
By A.A. Ramanathan
$40
FREE Delivery
Best Seller

A Constructive Survey Of Upanishadic Philosophy: Being An Introduction To The Thought Of The Upanishads (An Old Book)
By R.D. Ranade
$39
Sold Out

The Upanishads - Isha , Kena and Other Upanishads (Set of 2 Volumes)
By Sri Aurobindo
$60
FREE Delivery

The Yoga Upanisads (On the Basis of the Commentary of Sri Upanisad Brahmayogin) - An Old and Rare Book
By T.R. Srinivasa Ayyangar
$60
FREE Delivery
Best Seller

The Vaisnava Upanisad-s - English Translation Based on the Commentary of Upanisad Brahmayogin
By A.A. Ramanathan
$55
FREE Delivery
Best Seller
Book FAQs
Add a review
Have A Question