To Die in Benares (Stories)

In. seven grim, macabre and sometimes darkly comic tales, Madavane traces France's forgotten colonial presence, playfully reinterprets Hindu myths and recounts the many ways to die in postcolonial India. Recalling the pitiless world of Maupassant and animated by ghosts, gods and holy men, these haunting stories offer a fresh perspective on India's past and present, its many ironies and idiosyncrasies.

Mourir a Benares was first published in French in 2010 and received high acclaim for its depiction of India's most fabled town and the many unusual characters who populate it. Now available in English for the first time, To Die in Benares brings to a wide audience a rare and irresistible literary voice.

Born in Pondicherry, K. MADAVANE went to school at the Lycee Francais de Pondichery. He received his PhD from Jawaharlal Nehru University, where he explored the theme of death in the Theatre of the Absurd. He taught at JNU for years before retiring in 2011.

Madavane's plays include The Mahabharata of Women, The Veritree or the Falsity of the Gods, A Monologue for a Woman on Stage, and 1947: The Man from Lahore, which was shortlisted for The Hindu Playwright Award in 2017. To Die in Benares was first published in French as Mourir a Bewares in 2010 and is one of his most acclaimed works.

Madavane currently lives in Delhi with his wife.

THE WORLD OF To Die in Benares is the mirror of a `perhaps' disguised as certainties for which one is ready to die. In this world, it is necessary to have such certainties to accept oneself as human: by drinking the water of the Ganges, with its flowers and its pieces of flesh and its perfume of decay and its transformative burden, its inhabitants absorb the country and its objects, they are not wanderers left to their fates, all pains are admitted, because everyone shares them.

‘In the shade of trees imprisoned in their saffron roots, gods and men played, laughed, cried, mingled ceaselessly, and left each other without bitterness.’

Without bitterness? I'm not sure. For the price to pay for living in this place is beyond measure. Think of the long ordeal of Harischandra! Think of losing everything, sacrificing everything, in order not to tell a lie! This myth echoes like the death-knoll of Jocasta hanging herself with her scarf and of Oedipus gouging out his eyes: Harischandra, the archangel of the cemetery, the servant of corpses, clothed in orphan ashes, watching over the shadow of the departed and the cry of the jackals, a mythic figure who lingers long after the story's happy ending has deceived us. I do not believe in the wise man's repentance. They remained thus, frozen in their tragedy, and isn't the story more beautiful this way, isn't its music more fitting, when the fallen king refuses to burn the body of his sacrificed son unless his wife gives her clothes as payment? The subtext is subtle. A patriarchal world in which male honour is more important than female virtue, but no matter, Harishchandra is a heroic figure, he can only live according to the rules of this narration that does not forgive. I will retain of him the image of the guardian of the corpses, in the temple made of three red bricks. I will sleep beneath your eyes of walking nightmares, Harishchandra!

Without bitterness? Oh, but no! Kashi gives you a child when you set a hundred-rupee note floating on the Ganges. A lovely offering from a deserving couple who asked in return, not for millions, but for a child, that's all, a little something to enchant their lives with its perfumes of flesh and tenderness, what could be more fitting and simple? 'That very night, in Kashi, the two spouses had the same dream.' But of course, it's Parvati herself, it's Shiva himself, who will bring them this gift for their old age, this unexpected treasure, sought in vain, and which finally arrives late. The end of the story? Not here, no. Not in this place where, more than any other, one believes in fate. Not only is their child taken from them with this open contempt that the gods show to mortals who believe that they can make deals with them, but he will be taken from them in such a way that their lives, too, will be devoured and shredded by rats and vermin, they will go forward losing the rags of their last foetid illusions. Kashi doesn't just give death but also life? False. Kashi gives life the better to retake it, in a setting that can only satisfy its thirst for the tragic and theatrical. Seeing infinite pyres eventually becomes boring. A little serving of well-prepared fate, that's much more entertaining!

Under such a strict surveillance as that of the dead, who would dare, after this, to drive nails into tamarinds, knowing that they might stick themselves into one's own flesh? Here the dead are more present, less phantasmal, than the living. They scream, cling, shout, resist the disappearance of memory. A dead person is killed best by being forgotten. The dead of Benares don't want to be forgotten. And so, they appear. They don't need to haunt us, because they are there, at every crossroads, in every tree, in a ruined wall, and the end of a road that had seemed, however, to be safe. Beware each step forward! ‘To each his death.'

These relationships that bind us to the dead and to the infernal cycle of rebirths do not illuminate only the past. Isn't it also evident, in this collection, that they also cover foreigners and the present? Thus, for this Frenchman to stay in India, with which he has fallen in love, 'he does everything he can to renew his contract regularly. But for this, there is an indispensable karma that must be accomplished: keeping the French embassy happy.' What a karma! It would make us smile if it weren't serious. Each step forward creates a star composed of myriads of other steps, which all end by leading to Benares. In this story, as delicious as can be desired, "A Holy Cow in Varanasi" (I'm not stubborn. I'm selfish. I'm saying no,' the narrator says with a pleasurable lucidity), the whole chasm that divides the visiting foreigner, clothed in her preconceptions, prejudices and paradoxes, from the place itself, the ambiguity of which is now evident, appears through the narrator's almost nasty irony towards her. (‘I imagine that one day should suffice to know all about this city, isn't it so? - Just long enough to confirm your cliches.') In the background of this encounter, daily life, varied and unshakeable, goes on with the airs of an ancient chorus. Tragedy or comedy? Both at once, just as it should be.

The sadness of Benares. Journeys by train, calm faces, like masks before observed melancholies and echoes of far-off pains, the fascination of the goal before which everything recedes, fears, sufferings, resentments, resistances—death is the great leveler, and to look into its eyes allows one to believe, once more, in life.

From every corner of this universe these bodies were heaped on the riverbanks in order to disappear on these pyres like monsoon insects that kill themselves on lamplights.

Thousands of unknown bodies multiplied at the touch of this fire that no one had seen be born or give out.

Under its multiple names – Benares, Varanasi, Kashi – this town whose many faces Madavane captures continues to burn and to be reborn, to shine and to annihilate, an impossible cycle in which humanity is subject to wills much greater than its own, which will drive it to become a thief of skulls, a thief of another's memory, a thief of deadly passions, like one becomes a thief of fire, driven by the urgency and madness of poetry. Do not be deceived: sometimes, in Kashi, it is the dead who incinerate the living. 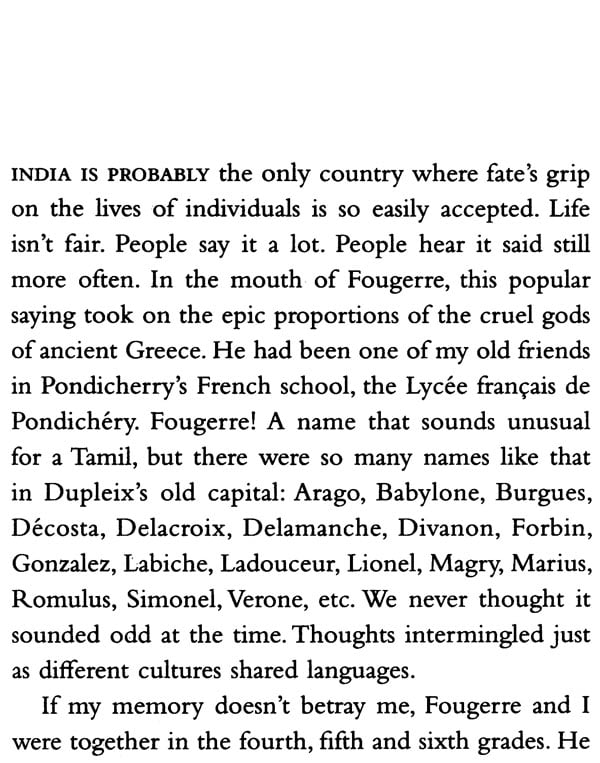 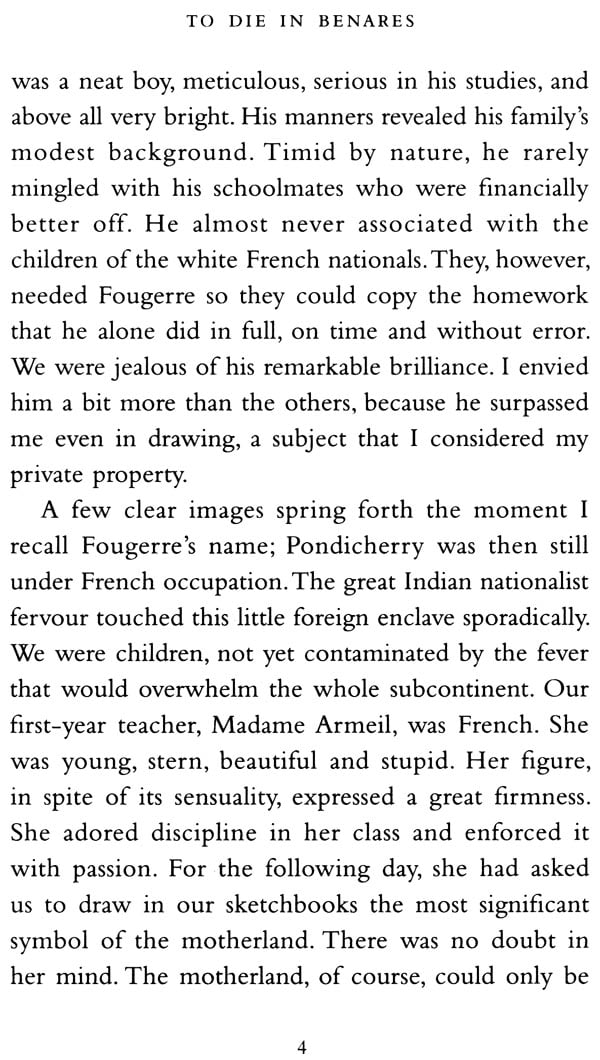 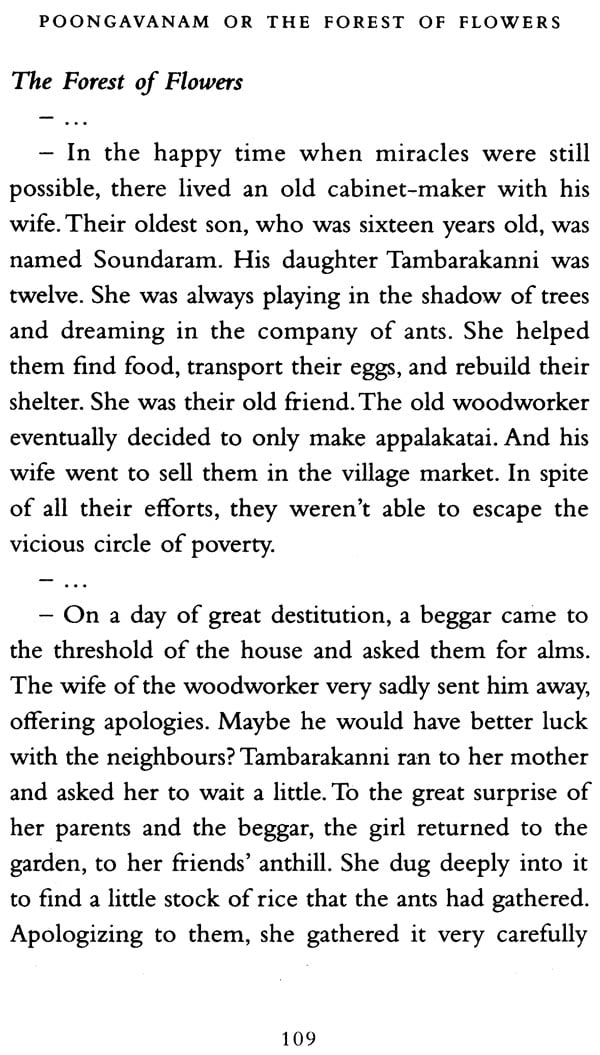 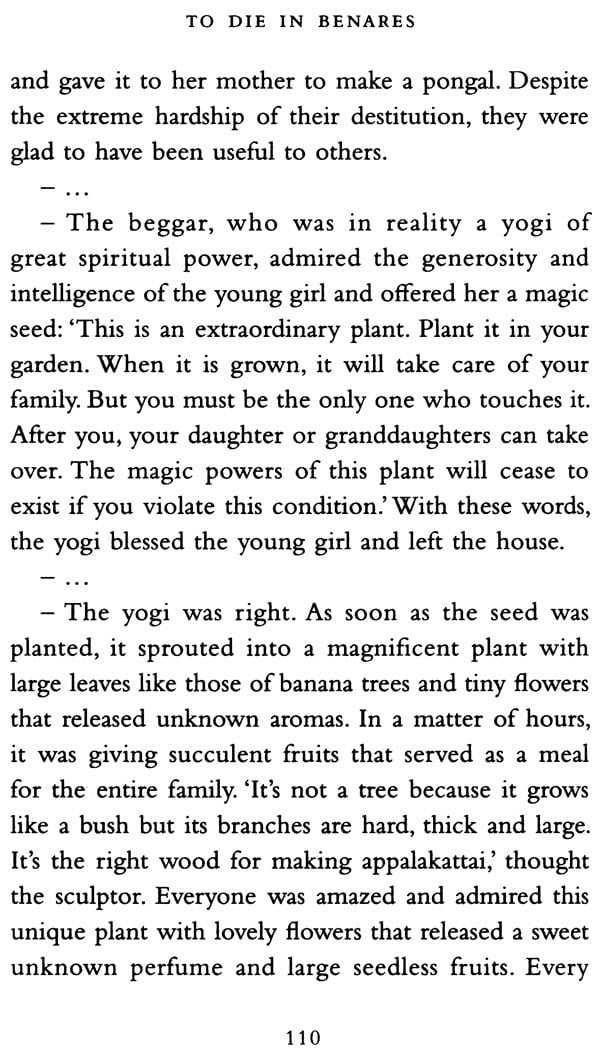 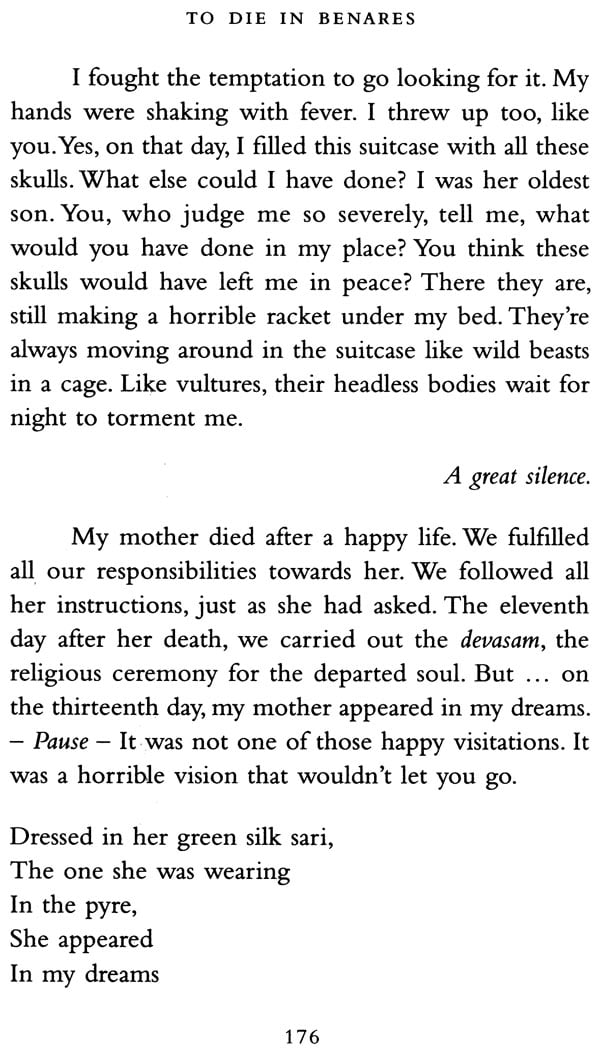 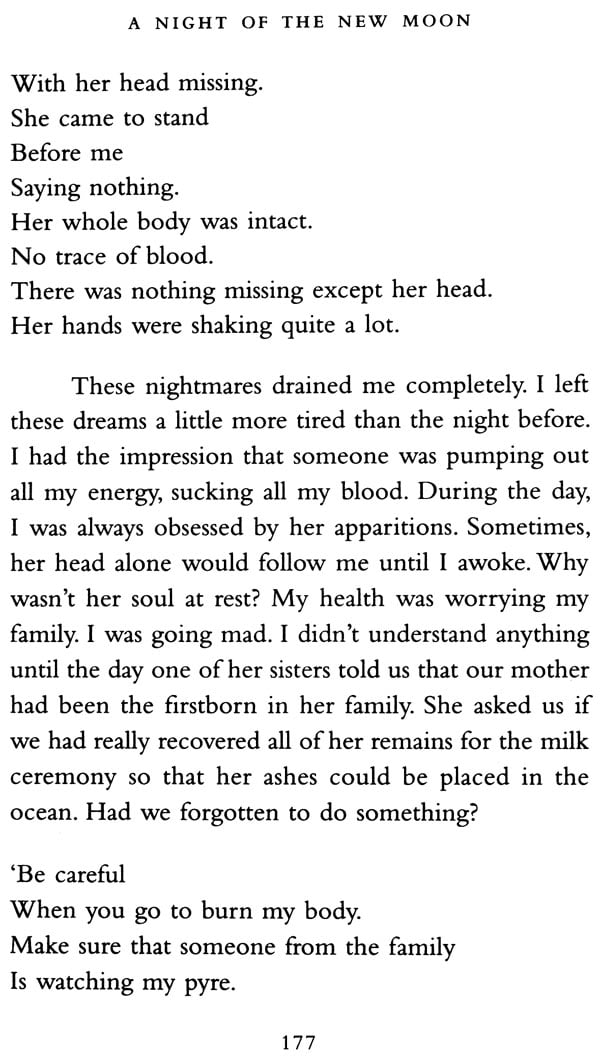 Benares: A World Within a World (The Microcosm of Kashi Yesterday and Today)
By Richard Lannoy
$43
FREE Delivery A Descriptive Catalogue of Sanskrit Manuscripts in the Government Collection (Set of 11 Books)
By Sh. Haraprasad Shastri
$395
Out of Stock An Outline of The Religious Literature of India
By J.N. Farquhar
$37
FREE Delivery