The book presents Sri Harirayaji's tendency of Bhakti-Philosophy, especially of Vipralamtbhasrngarabhakti, a sweet kind of Krsna-devotion, which is established as the climax of God- realization in the term of Divine Love.

The beginning portion of the book introduces origin and development of Vallabha-school and fixes the place of Sri Harirayaji among his predecessors. The first three chapters are colourfully devoted to describe the life and the works of Sri Harirayaji. The last two chapters of this are actually the most important essence and the special contribution in the field of Bhakti- Philosophy. The various factors of Vallabha-principles of Prema-Laksana Bhakti are eleborated in the light 'of Vipralaritbha-Sringararasatmaka-Bhakti, the sumum-bonum of God-realization. The last chapter gives a comparative study of Sri Harirayaji's eye-view of Vipralambha-Bhakti with other saintly experiences of devotion, both nationally and internationally and humbly efforts to establish the superiority of Vipralambha-Srngara- Bhakti, embracing the whole universe as the sweet love-experience of God Krsna, the Lord of Love and Beauty.

The author has tried to prove that the experience of Vipralaritbha-Bhakti is eternal and even superior than that of Sam yoga aspect of Bhakti, giving various quotations from the books of Bhaktisastra. The illustration of the Vraja-Gopis is only followed by Sri Harirayaji to establish the superiority of Vipralambha-type of devotion.

Sri Harirayaji was a devotee, who experienced this kind of separation from Lord Krsna through out his long Life and proved the highest kind of sweet delight in Vipralaritbha-Sringara- Bhaka, i.e., eternal union of God Krsna, in all His Lilas simultaneously even in His outward absence, which gave him अलौकिक सामथ्यर्य Divine power to sustain the life, enduring ever the pain of separation.

Dr. Rameshchandra Govindlal Shah (b. 29th Nov. 1937) comes from a noble Vaisnava Dashalada Yanik Family of DABHOI, a town of Baroda District of Gujarat State of India. He got his education in a vernacular and a secondary school at Dabhoi respectively. After passing S.S.c. Examination in 1954, he joined in Baroda College (M.S.Univ.), where he gradually progressed getting degrees of B.A (Sanskrit), M.A (Sanskrit) and Ph. D. (Sanskrit). He winned Vallabha Vedanta Prize at M.A and so inclined to select his subject of Ph.D. for his thesis viz., Sri Harirayaji, His Life and Works". He also passed M.A (Gujarati) through Gujarat University, Ahmedabad. Dr. Shah served at different colleges and then appointed in 1982 as a University Lecturer at Baroda Sanskrit Mahavidyalaya of M.S. University, where he progressed to reach the post of Assistant Principal. He taught Sahitya and Vedanta and guided even Ph.D. (Vacaspati) students. He is a writer, poet, critic and an orator and also a Missionary, handling as an editor 'Divya-Iagrti' (Gujarati). His publications are Hariraya-Astottara-sata-namavali (Sanskrit), Uddhava-gitamrtabindu (Gujarati) and Prema-datri Sri Yamuna (a commentary of Yamunastakam), Now his book viz., Vallabha-Cult and Sri Harirayajl is recently published through Pratibha-Prakashana, Delhi (AD. 2005).

During my study for M.A. I had to pay special attention to the Anubhasya prescribed as a part of one of the two special papers for my voluntary group. I was attracted by the theory and doctrine of the Suddhadvaita Vedanta system. I also got the special prize called 'Shetha Todarmal Samal Bechar Vallabha Vedanta Prize' given to the candidate passing with the highest number of marks in the section on Vallabha Vedanta. In social life also, I am surrounded by persons, who are believers in the path of devotion. From my childhod I was attracted by devotion to Lord Krsna. I need not enter into further details of my personal life. It was a great luck of mine that I had to study for my M.A. under the guidance of Dr. Prof. Arunodaya N. Jani, who taught me the Anubhasya: I also met Dr. P.M. Modi for consultation on difficult points of Anubhasya. After M.A. (when I got the above prize) I sought help from Dr. A.N. Jani for the choice of a right subject for research for Ph. D. Meanwhile, I happened to hear a lecture on Sri Harirayaji from the great Pandit Krsnasankar Shastri on the birth-day of celebration of this great religious teacher at my native place, Dabhoi, which was the residence of the great Vaisnava poet Dayarama. I came into closer touch with Sri Krsnasankar Shastri, a talk with whom first inspired me to select the theme of my thesis on Sri Harirayaji. I ran to my Prof. Dr. A.N. Jani and he directed me to see the late Prof. G.H. Bhatt, who had inherited the religion and philosophy of Sri Vallabhacarya, from Prof. M.G. Shastri, the great scholar and follower of sud dhadvaita vaisnavism and a very enthusiastic propagator of the same. It was Prof. G.H. Bhatt, who helped me in definitely deciding the theme of my thesis. Inspite of heavy work as both Professor and Director of the Oriental Institute, M.S. University, Baroda, he guided me at the first stage of my research. He made certain personal suggestions to me for fulfilling the work, I was to undertake. This concerns my own personal life. I made this note here because I even now feel that whatever efforts I have made and whatever success I have got are partly due to my carrying out these personal instructions of Prof. G.H. Bhatt.

The work, which I undertook was in a way quite new. It required me to move about in order to find out the material of my thesis. There have been in India innumerable religious teachers, about whose life people know very little. Though they honour them, Harirayaji is also one of such teachers. So I had to go out on several tours to gather the information on my subject and also to understand exactly the contribution of Sri Harirayaji to the development of the particular school he belongs. Without getting this information and putting it properly my thesis could not be completed. I, therefore, mention here the persons with the places, who have positively helped me and to whom I am highly indebted.

Before I mention persons outside Baroda, I must acknowledge my first hand indebtedness to my revered guides in Baroda itself. Among these the professors in the Sanskrit Department of the University stand first. The first person is Prof. C.H. Bhatt, whom I have already mentioned. I may feel a little unhappy that unfortunately he could not survive to see the completion of this work. The next person is Prof. Dr. Arunodaya N. Jani, who, in absence of Prof. Bhatt, inspired me to fulfil the work just begun. I am sure, without his advice and encouragement throughout the project, it would have been impossible for me to make any progress in my thesis. I am happy to say that during this time fortunately for me Prof. Dr. P.M. Mody, who retired from his Bhavnagar State service, settled down at Baroda and joined the M.S. University as an honorary professor of Sanskrit. His study and experience have been always open for me for use whenever I needed them. I pay my respect to Shastri Badrinathaji, in this connection. I had also the benefit of getting information on my subject from two persons, who are not only scholars, but who are themselves followers and teachers from long tradition of the religion and philosophy of Sri Vallabhacarya. They are: (i) His Holiness Goswami Sri Mathuresaji Maharaja and (ii) Pujya Sri Indira Betiji Maharaja. Out of these two authorities the latter one has explained to me several technical matters known only to the religious heads of the particular sampradaya, which I would not have otherwise known. She has also obliged me by allowing me to stay and to read at her temple.

In this connection, I owe my obligation to His Holiness Vrajaratanalalaji Maharaja of Surat (Balakrsnalalaji temple), who gave me details about the works of Sri Harirayaji and later on, on other occasion explained to me some doctrinal points, including that of Radhaji or Swaminiji. Sastri: Chimanlal, of the same place, suggested some important points about my thesis and made me acquainted with journals and works, dealing with my subject.

Prof. Nagaradasabhai Bambhania is the next one, whom I should mention here. It was he, who fixed my mind on the definite lines on which I was to proceed with my work, leaving aside matters not directly connected with the theme. Among other scholars of Ahmedabad, I should mention, Sri K.K. Shastri and Ex Principal Sri J.G. Shah. With both of them I had a discussion about the works of Sri Harirayaji. The former has published two volumes, containing the works of Sri Harirayaji and the latter is the author of works in Gujarati and English, well known and very useful to special students of suddhadvaita. I have taken advantage of Prof.J.G. Shah's work "Srimad Vallabhacarya, His Philosophy and religion" published only recently (i.e. before 1970).

From among the Maharajas (the religious heads of the pusti marga, I must here mention His Holiness Sri Dixitji Maharaja of the Bada Mandir, Bombay, who taught me certain portions of Sri Subodhiniji and who introduced me to the librarian Giridharlalbhai, dealing with the works of the pusti marga. I also took advantage of the Gatulal's library and the Farbas Sahitya Sabha, Bombay. From these I could read not only the printed works, but also some important MSS.

At Nathadvara and Kankaroli, I found much valuable literary material (both published and unpublished). At Nathadvara and Khimanor situated nearby, I could secure pictorial information which I have mentioned separately in 'list of photographs with description', given in. this book. It would not be wrong to say here that I grasped the contents of Sri Harirayaji's work viz., Brahmavada and of his writings on the Subodhiniji, from Sri Anandilal Shastri, the head of the Vidya Vibhaga at Nathadvara temple. Several other persons at Nathadvara, including Lala Bhagavandas, have also obliged me. At Nathadvara and Kankaroli I secured the help as stated above, in the special institutions of the pustimargiya temples. His Holiness Sri Vrajeshkumaraji of Kankaroli obliged me, when he visited Baroda, by allowing me to copy an unpublished letters of Sri Harirayaji and Gopesvaraji, which are given in the Appendix III. I benefitted from a talk with Shastri Sri Kanthamani at both at Kankaroli, his place of service and at Baroda, which he visited.

At Kamavana, near Mathura, I was allowed to copy the MSS of Sri Harirayaji in the temple there.

Among the places I visited I must mention the Religious Seats (the Bethakas) of Sri Harirayaji at Jambusar, Savali, Dakar, Nathadvara, Khimanor and Gokul, which even now inspired the Vaisnavas, devoted to Hariraya's tradition. There is also one more seat at Jesalmer. Bethak at Khimanor is shown in the respective pictures, given in this book. Among the Maharajas I must mention His Holiness Vrajabhusanalalaji 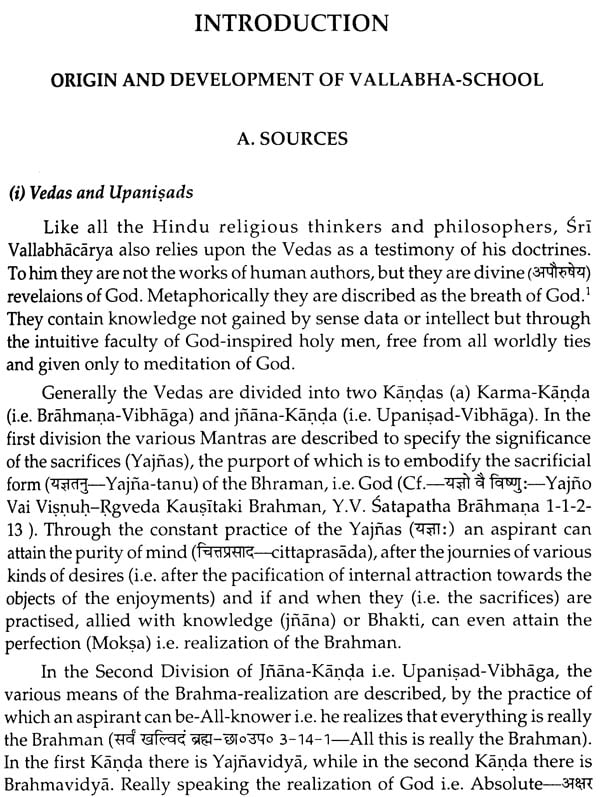 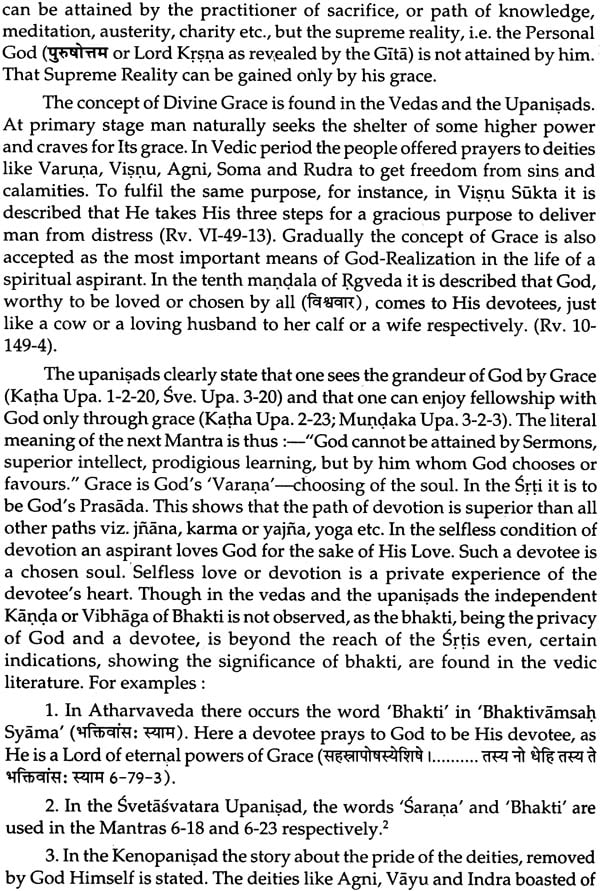 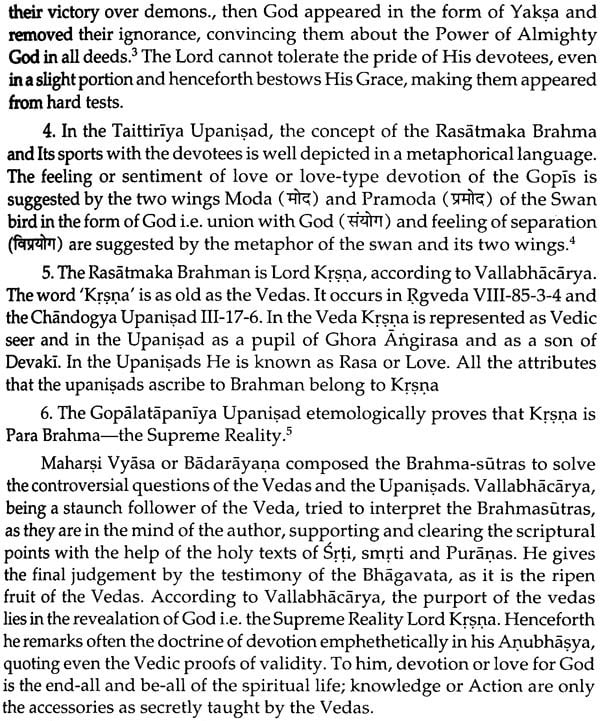 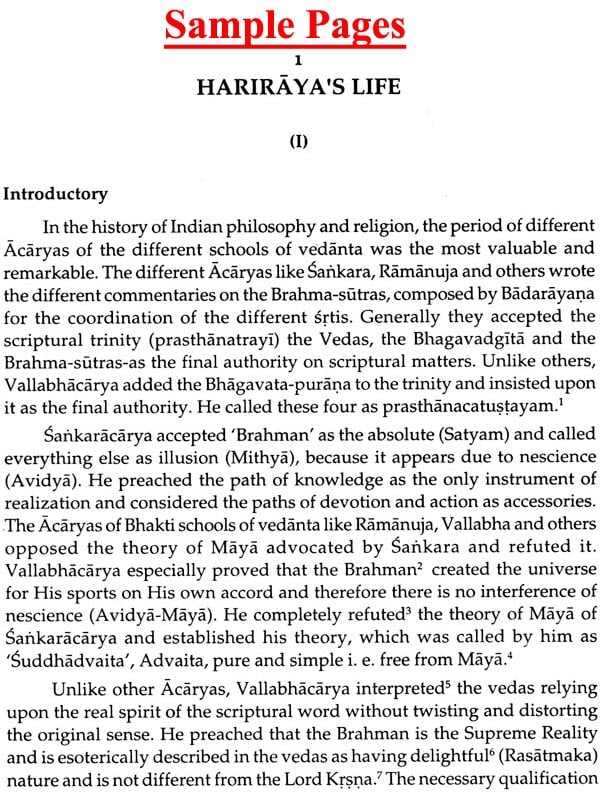 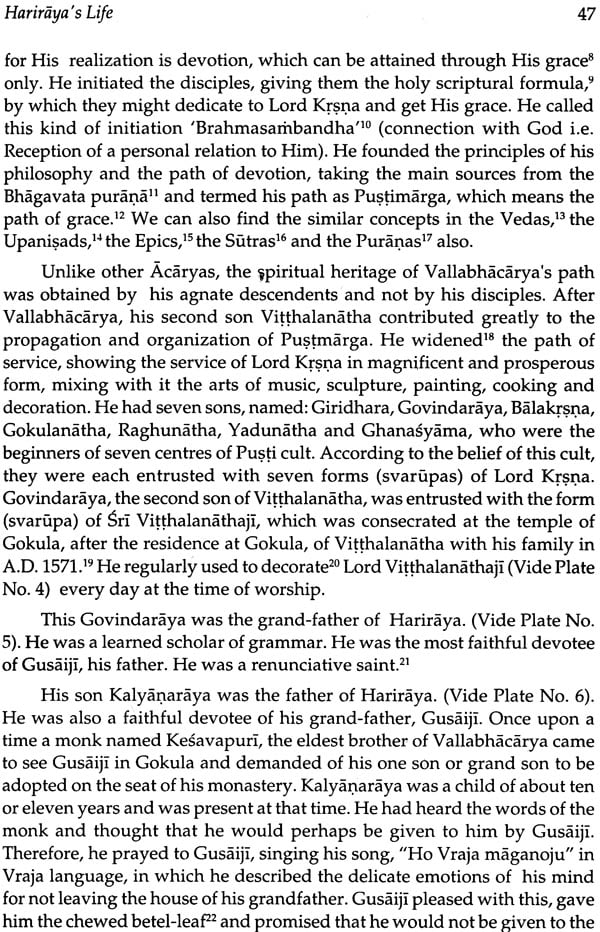 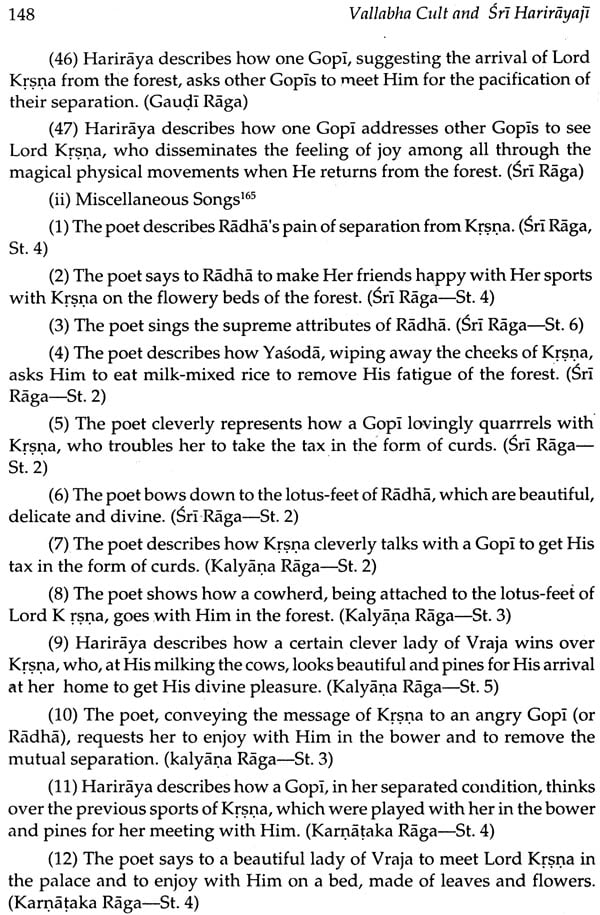 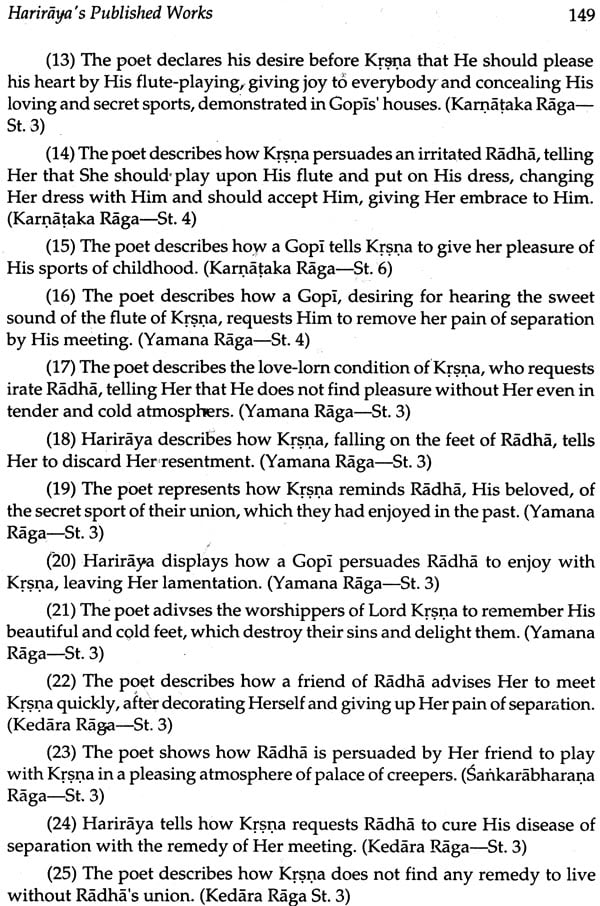 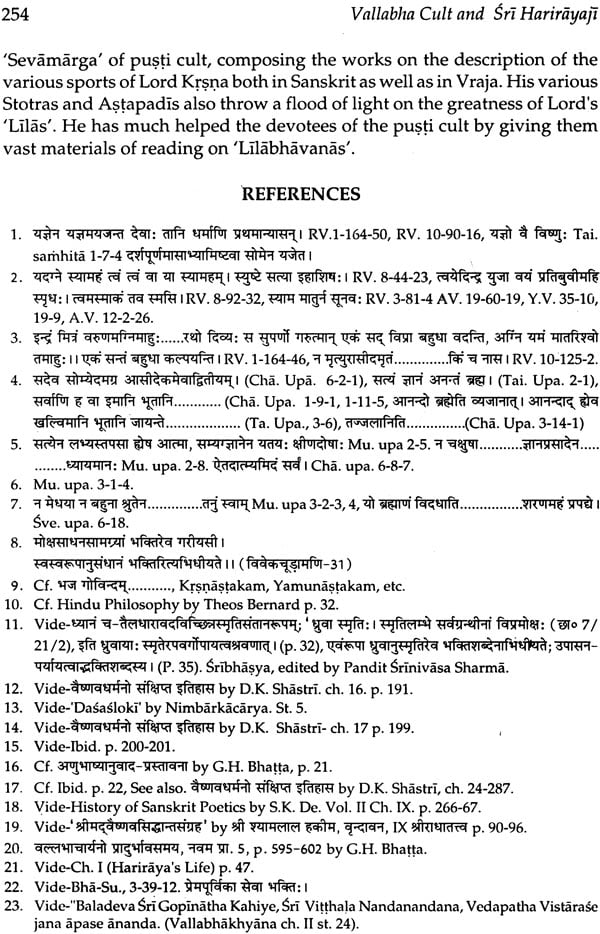 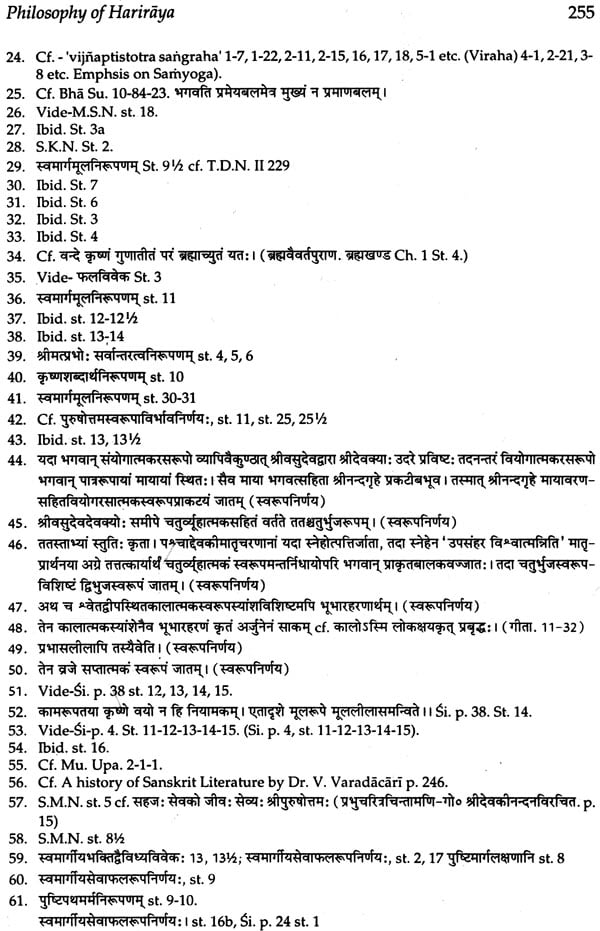 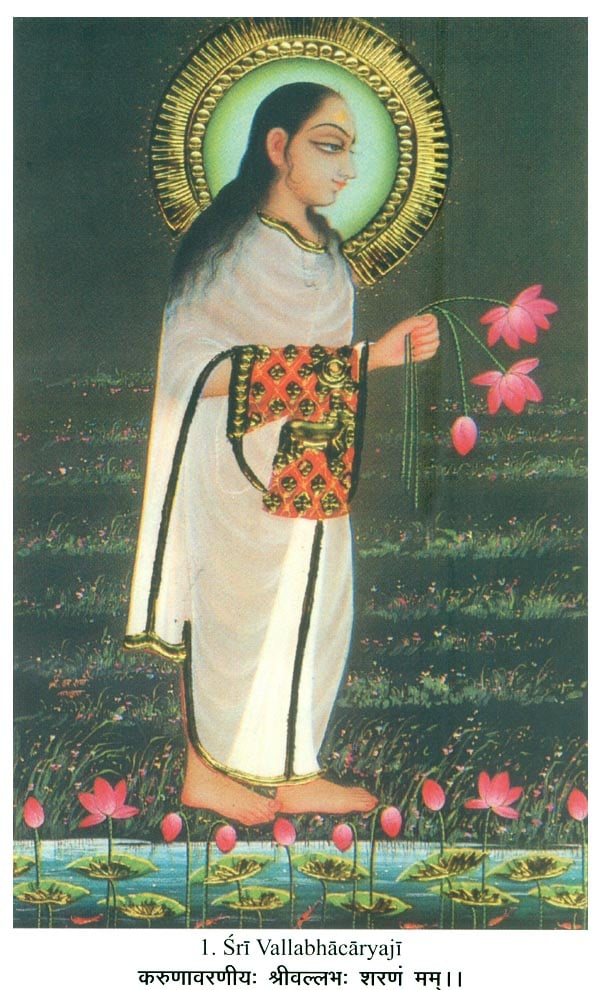 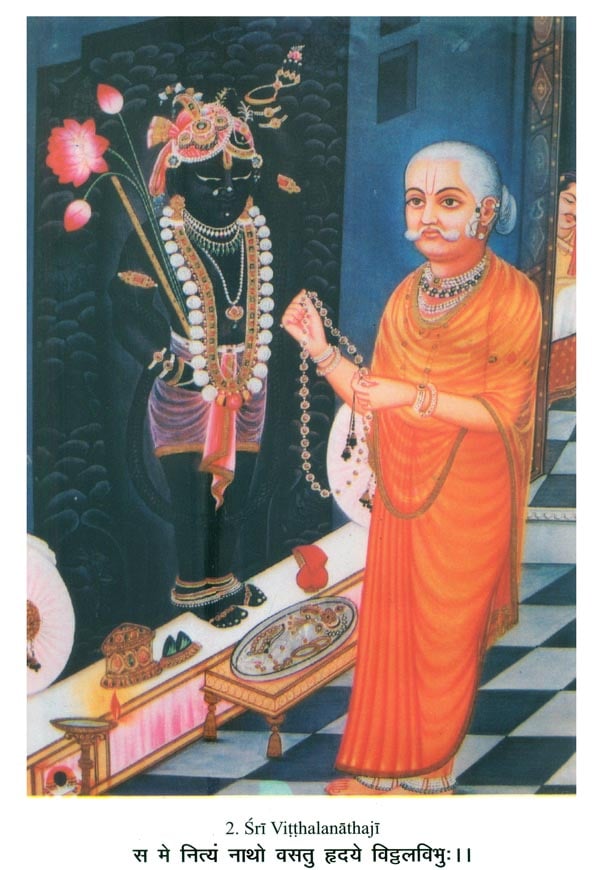