Tara - The Goddess who guides through Troubles 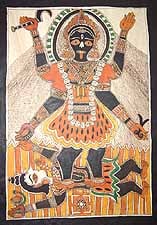 $35.00
Notify me when this item is available
Save to Wishlist Send as E-card Share by Email
The oral tradition gives an intriguing origin to the goddess Tara. The legend begins with the churning of the ocean. Shiva has drunk the poison that was created from the churning of the ocean, thus saving the world from destruction, but has fallen unconscious under its powerful effect. Tara appears and takes Shiva on her lap. She suckles him, the milk from her breasts counteracting the poison, and he recovers. This myth is reminiscent of the one in which Shiva stops the rampaging Kali by becoming an infant. Seeing the child, Kali's maternal instinct comes to the fore, and she becomes quiet and nurses the infant Shiva. In both cases, Shiva assumes the position of an infant vis-à-vis the goddess.

The dhyana mantra of Tara in her form as Nila-saraswati in the Tantrasara is as follows.

I bow to you mother Nilasarasvati. You give well-being and auspiciousness. You are situated on the heart of a corpse and are advancing aggressively. You have three fearful, bright eyes. You carry a skull bowl, scissors and a sword. Your form shines like a blazing fire. Give me refuge. Give me golden speech. Please let your gracious nectar drench my heart, remover of pride. You wear a tiger skin as a skirt and a garland of chopped off heads. You are frightening and remove fear.

The similarities in appearances between Kali and Tara are striking and unmistakable. They both stand upon a supine Shiva, identifiable here by his damaru. Both goddesses are black. Both wear minimal clothing. Both wear a necklace of severed human heads and a girdle of severed human arms. Both have a lolling tongue, and blood oozes from their mouths. Their appearances are so strikingly similar that it is easy to mistake one for the other. Indeed, they are often said to be manifestations of each other; for example, in their thousand-name hymns they share many epithets as well as having each others names. Tara, for example, is called Kalika, Ugr-kali, Mahakali, and Bhadra-kali.

Like Kali, furthermore, Tara in her Hindu context enjoys blood. In her hymn of a hundred names from the Mundamala-tantra, she is called She Who Likes Blood, She Who Is Smeared with Blood, and She Who Enjoys Blood Sacrifice. The Tara-tantra describes Tara's delight in both animal and human blood but says that the latter is more pleasing to her. The blood of devotees is to be taken from specified parts of the body, such as the forehead, hands, breasts, head, or area between the eyebrows; some of these areas may correspond to the different chakras, spiritual centers within the body.