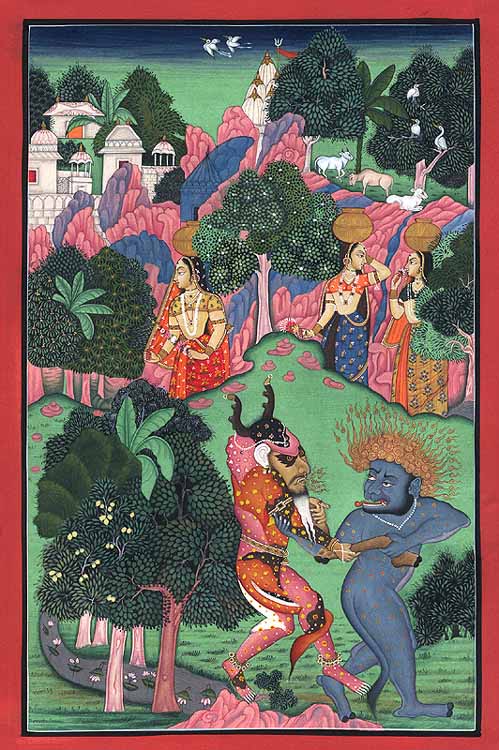 $205.00
Notify me when this item is available
Save to Wishlist Send as E-card Share by Email
This exceptionally fine painting, a masterpiece of miniature art, clubs together on a single piece of canvas two extremely contrasting themes and aesthetic visions and of course a number of art styles. The landscape, peculiar as it is, stands divided into two parts by a series of typical rocks of pink-red, mauve and lavender rising in the center of the canvas. On this and yonder side of these rocks there stretch patches of land in flat green not characterized by any kind of plants, shrubs or vegetation. On the lower side of the painting two demons, one red and the other deep mauve, are seen fighting over an animal limb. At the foot of the rocks and in the center of canvas there are three partially concealed damsels who are carrying on their heads pitchers and in their hands flower bunches. They are returning after collecting water from pond, river or well. The space beyond the rocks has strewn all over it temples, palatial mansions, trees laden with fruits and flowers, cattle and birds. The green patch on the lower side of the canvas is bereft of life save a few trees, and perhaps herein lies the key symbolism to the thematic mystery of this rendering.

Central Asian folks have in abundance the tales related to horned and quaint creatures like these. There are yet in prevalence in Chinese art and in the art of other Central Asian countries creatures with gold mounted horn-tips and gilded hair. Later these tales and their queer demonous creatures traveled to Persia and Arab nations and were soon part of the Persian folks and the tales of Arabian knights. During medieval days they were brought to India by Islamic invaders and rulers and were soon the popular element of Indian fiction and folks and were widely painted. Thus, the demons are an extraneous element reaching India from Central Asia via Persia. Color scheme, the extensive use of mauve and lavender, peculiar pattern of rocks and features of the demons are more akin to Deccan, though the female figures, architectural patterns and topography have reflection of Rajasthan, Bikaner in particular. Finely drawn symmetrical trees, cranes and other birds have reflections of Pahari art.

The occurrence of demons along a traditional Indian theme and occupying almost half of the canvas is a strange and unusual thing in Indian miniatures. The demons fighting over an animal limb have no known relevance to the main theme. The village damsels coming back after fetching water are unaware of their presence for neither their faces reveal any fear nor their pace betray any kind of uneasiness. The demons too seem to have their role in the painting restricted to only obtaining the animal limb. There prevail locally in some parts rituals to appease demons by making them offerings. All the women carry, quite strangely, bunches of flowers in their hands as if for performing some rituals. But one of them is smelling it, which corrupts the flowers rendering them unworthy for a ritual offering. Besides, even the demons are in no way prepared to serve a votive role. The demon in mauve might be a transformation of a buffalo such as is conceived in Devi cult but the red one corresponding to a panther is hardly the part of Indian mythology.

Despite, the quaintness of theme effected by bringing two worlds, one of men and the other of ghosts, together and the curious amalgamation of various styles make the painting highly interesting. The supernatural element in the painting is very strong. The flames of fire emitting from the gold gilded hair of the one and from the mouth of the other and the eyes of the two are curious and quite unusual rarely seen in Indian miniatures. The red one has horns with tips gilded in gold and a goat like pointed beard. The Indian mythological tradition is not known to have a demon of his kind. The element of quaintness thus makes the painting highly interesting. Another curious element consists of women folk carrying flowers in their hands. The temple with trident flag is a Shaiva temple. The total composition is quite packed with forms and figures but despite it does not give the feeling of being crowded. Symbolically the demons' world is devoid of life whereas that of the men teams with it.