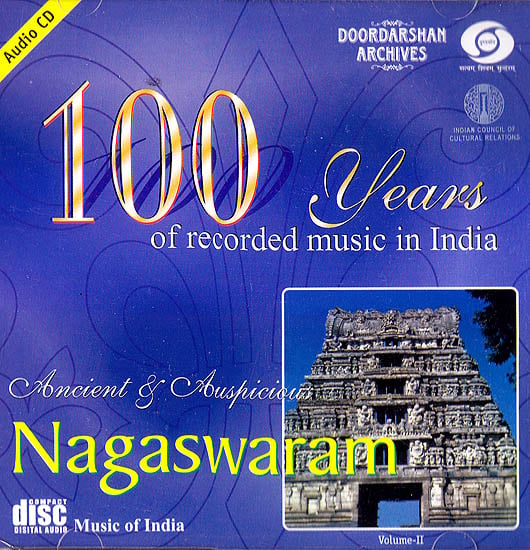 As shehnai is to the North India so is Nagaswaram to South India. Surprisingly this instrument which is so entwined with the lives of the Southerners which is a very important and integral part of their socio cultural life is otherwise not a very well known instrument. Many are not aware of the unique but resounding tonal quality of the nagaswaram.

Strongly associated with the temple rituals Nagaswaram has an exclusive repertoire like Mallari Odakooru and so on. There was a code adopted by the artistes as to what raga should be played at which sannidhi and also on which festival days. Similarity there was a strict traditional rule that no lyrical composition should be played while the deity is in procession Varna or Keertana or Kruti or any such composition had no place there. Mallari is a compositional type with no lyric which requires the precise renderings fo the relatively short composed melody in different speeds within the constant rhythmic cycle. This should be rendered only in the pentatonic raga Gambheera Nata as per the nuncupative norms enunciated by the ancients. Mallari could be compared to a signature tune, for people from any distant corner would easily know, as soon as the sound of Mallari reaches their ears, that some deity has started its procession. Besides such processions of the deity, short Mallaris are also used while bringing water to bathe the idol or for the Kumbhabhisheka’ - consecration (Teeratha Mallari) and while bringing the food offering to the deity from the temple kitchen (Taligai Mallari) and so on. Rakti, though appears very short, is highly technical and improvisational form, based on a particular rhythmic formula. It looks like a short Pallavi, but has no sahitya (lyric) and gives room to manipulations of terse arithmetic that many a time it would tease and deceive even the well experienced Tavil accompanist. This rare and unique piece has also lost momentum nowadays except in one or two temples. ‘Odakooru (correctly Udarkooru) is a peace in Mayamalava Gaula or Nadanamakriya raga and played on the day of the festival when the deity takes procession as Bhikshatana on that festival day no Mallari or Rakti is rendered and this Odakooru is the only item played right from the beginning till the deity returns to the temple. This is restricted only to Siva temples. After Mallari only Raga elaboration followed by Rakti and then the Pallavi have the place and only after the deity enters back in the Rajagopura one or two Padams and then Heccharika are played. Raga expositions for many hour in such a brilliant manner by the talented artistes made the listeners enjoy them without any boredom sleepless night offered them only brinful of joy.

The music is Nagaswaram is filled with auspiciousness and majesty. Because of the same reason it acquired the honorific Mangala Vadya as such there could be no social activity wedding child’s earboring ceremony Gruhapravesam new shop opening be it what may without the active participation of Nagaswaram. In Tamilnadu even Muslims engage Nagaswara troupes for wedding celebrations though its use is restricted similarly like any Hindu temple the Dargah Sahrif at Nagore has a Nagaswara troupe in its pay rolls for daily service. Since the belief that the sound of Nagaswaram wards off all evil and usheres in auspiciousness it came to stay as indispensable for nay domestic ritual.

There were many celerities who enhanced the status of his instruments by their ecemplary playing like Mannargudi Pakkri Pillai Trimrugal Natesa Pillai, Madurai Ponnusvami Pillai and T.N. Rajaratnam Pillai in the recent past two great Nagaswara artistes dominated the musical scene of tamilnadu and by virtue of their excellent mastery and brilliance they reached the pinnacles of glory. They were Namasgiripettai K. Krishnan and sheik Chinnamaulana Sahib.

A veritable feast for all music lovers this ACD brings you some of the finest performances by eminent Nagaswaram vidwans of our times.

It is part of Doordarshan’s special series commemorating 100 years of recorded music in India.

There series is a tribute to all the great artistes who have contributed to India’s rich music and dance heritage.