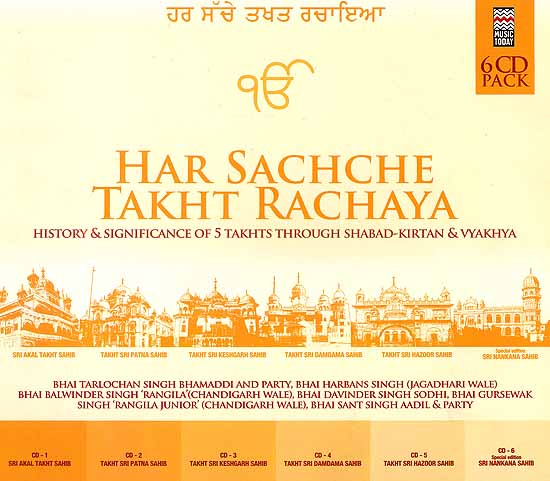 Har Sachache Takhat Rachaya: The History and Significance of 5 Takhts Through Shabad-Kirtan and Vyakhya (6 CDs Pack)

Sri Akal Takhat Sahib has an important place in the Sikh Religion. Akal Takhat is a combination of two words Akal (the Almighty) and Takhat (Throne) thus meaning the throne of the almighty Sahib is used as a mark of respect for Guru Sahib and the Sikh institutions. Sri Akal Takhat Sahib represents the Sikh institutions of Miri (temporal) and Piri (transcendental). The Sikh concept of Miri-Piri is not the unity of the two domains but one ness of the two which means that both Miri and Piri don’t stand apart from one another but they resonate each other. The same is echoed in the words of Sri Guru Gobind Singh Sahib Ji when he says Mukh Te Har Chitt Main Yudh Bicharal meaning that a Sikh concept of Miri-Piri Symbolizes humanity justice righteousness and spiritually.

It is here that Sri Guru Hargobind Sahib Ji used to hold his court and receive ambassadors, emissaries, Diplomats and other dignitaries. It is here that the heroic ballads wee sung by the Dhadi-s (balled singers) in order to infuse the spirit of Chardi Kala (the Concept of ever uprightness) among the Sikhs.

On October 12, 1920 the priests performing the routine duties at Sri Akal Takht Sahib left the throne unattended. Following this the Sikhs present there selected a Jatha (a band) of 25 Sikhs to take care of the Takht. Jathedar Teja Singh Bhucher was appointed the Jathedar (leader) of this Jatha. Since then the term Jathedar has come to be used at the Akal Takht Sahib Presently the Jathedar of the Takht is Singh Sahib Giani Gurbachan Singh Ji.

Takht Sri Damdama Sahib is situated at Talwandi Sabo near Bhatinda. This is the place where Guru Gobind Singh Stayed for nearly a year and compiled the final edition of Sri Guru Granth Sahib Ji also known as the Damdama Sahib Bir in 1705, AD. The only difference in this Bir and the Bir compiled by the fifth Nanak, Sri Guru Arjan Dev Ji, is that the Bani of the Ninth Nanak Sri Guru Tegh Bahadur Ji is added to it.

Takht Sri Hazoor Sahib is situated on the banks of River Godavari in Nander Maharshtra. This is where Sri Guru Gobind Singh Ji breathed his last. The inner room of the Gurdwara is called Angitha Sahib and is built over the place where Guru Gobind Singh was cremated in 1708 AD.

This album presents the history & significance of Takht Sri Hazoor Sahib by renowned Ragi Bhai Davinder Singh Sodhi through shabad-kirtan. It also features the famous aarti Gagan Mein Thaal which is sung at the takht regularly.

When he joined a school at Nankana Sahib the Guru is said to have written fundamentals of education on the wooden takhti to enlighten the people Sri Guru Nanak Dev Ji married on 21st May 1487 AD to Bibi Sulakhani Daughter of Mulchand Khatri of Batala. It was at Nankana Sahib that he met Bhai Mardana who was his companion for 47 years listening to and singing the Guru’s gospel. According to went into silence for days together. He did not eat a morsel or utter a word. Towards his adolescence Sri Guru Nanak Dev Ji left Nanakana Sahib for Sultanpur Lodhi.

At the time of partition the Sikhs not only lost lives property and wealth but also lost their loved and revered shrines which fell on the other side of the border. These Sikh shrines in Pakistan are managed by the board and every year Sikh Jathas visit these shrines on four different occasions. On the occasion of Sri Guru Nanak Dev Ji’s birth anniversary about three thousand Sikh Devotees from India and all over the world visits Nankana Sahib every year.

In this album we present the birth Shabad-s of Guru Nanak Dev Ji by the Jathedar of Sri Nankana Sahib Bhai Sant Singh Aadil.

The Concept of Takht in Sikhism

The concept of Takht literally meaning a throne or seat of authority is the result of historical development of Sikhism. The five Takhts holding special significance for the Sikh community are instituted in five Gurdwaras. These Takhts are the seats of Sikh religions authority important decisions concerning the religious and social life of the Sikh community have been taken here for centuries.

The use of the word Takht in Gurmat is unique. The Takht is not subjective but an eternal concept. It is free from the limitations of time and place. Such a conception of the Takht has been formulated by the Ten Gurus of Sikhism. A Takht advocates impartiality independence and sovereignty of the Guru Panth. All the five Takhts are fountainheads of Inspiration and centers of enlightenment for the entire Khalsa Panth.

For the very first time Music Today presents the history and significance of the five Takhts in the form of Shabad-Kirtan and vyakhya by renowned ragi-s in this special pack of 5 CDs. Each album also features the history of the Takht as narrated by the respective Jathedars.

This pack also features a special 6th album presenting for the first time Gurbani by the Hazuri Ragi of Nankana Sahib the birthplace of Sri Guru Nanak Dev Ji the founder of Sikhism.