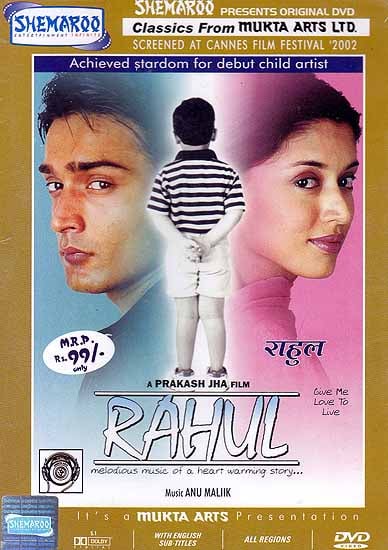 Screened at Cannes film festival 2002
Achieved stardom for debut child artist
Give me love to live.

“…the film scores for its noble premise.” – Afternoon
“Anu Malik’s music and Anand Bakshi’slyrics are superb…Arind K’s cinematography is appealing…” – Mid-Day
“Just the perfect blend of innocence and intelligence, Yashs face is a canas of myriad expressions…” – Indian Express
“No doubt that Jha has treated the subject in a sensitive manner…” – The Asian age.

Rarely does a five-year-old become a sensation with a debut film. Yash Pathak in the title role did just that. The film pits a child’s innocence against adult problems and looks at the ordinary adult world from a child’s point of view. 4 year-old Rahul staying with his papa (Jatin Grewal) wants his divorced mother (Neha) back to his father who has already brought another woman in the house to look after Rahul as a mother. Rahul is in a dilemma and goes through the most interesting blend of tears and laughter to unite his parents till he really fails…the rest is the climax handled with kid-gloves. Yash delivers a heart-warming performance, bringing unanimous applause from many professional actors.