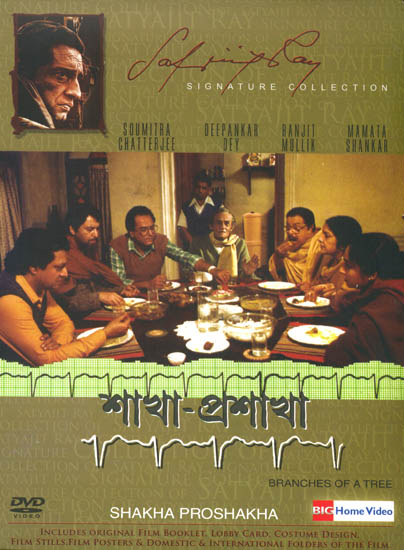 Shakha Proshakha: Branches of A Tree (A Film by Satyajit Ray) (DVD)

The story is set in Anandapur, a township in a mica mining area in Chhota Nagpur, in January 1990.

The film opens on the 70th birthday of the most eminent citizen of the town – Anandmohan Majumdar – who, through sheer hard work and honesty – rose from a low position in the Orient Mica Works to be its General Manager.

He now lives a retired life in his large mansion with his senile father and his second son Proshanto, who became mentally deranged after a motor accident while studying in England.

Anandmohan has three other sons – Probodh, Prabir and Protap – who are all well placed in jobs in Calcutta. Although stories about corruption, black money and the corrosion in values in the city reach his ears. Ananda still believes that if a man decides to honest, he can still be so and make good in life.

At the civic reception in honour of his birthday, Anandmohan has a heart attack.

The family consisting of the eldest son Probodh and his wife Uma, the third son Prabir, his wife Tapati and his 5 year old son Dingo, and the youngest son Protap arrive from Calcutta. They stay for a week in course of which we learn that Probodh, the general manager of a big company, has accepted the fact of a change of values and has taken recourse to black money in order to live well.

The same applies to the businessman Prabir. The youngest, Protap, had been an advertising executive, but gave up his job when he learned that a senior colleague whom he loved and respected as an elder brother, had been involved in a swindle and pocketed a huge amount of money from one of their own clients. Disillusioned, Protap has now joined a theatrical company.

On the day of the family’s departure, Prabir’s son Dingo tells Anandmohan that he had overheard his father and his uncle accusing each other of resorting to black money. The revelation shatters Anandmohan until, for the first time, Proshanto comes into his room and Anandmohan suddenly realises that he still has a one son who is incorruptible. The grasp each other’s hands.

Satyajit Ray, was a towering figure in the world of cinema. He studied at Calcutta University and later joined Shantiniketan, Rabindranath Tagore’s university to study art. Ray began his career as a commercial artist (1943-56). He founded Calcutta’s first film society in 1947 and made his first film, Pather Panchali (1955) while working at an advertising agency, Pather Panchali was an immediate success and won grand prix at the Cannes festival. The success of Pather Panchali gave ray total control over his subsequent films. Two sequels based on the novel (Aparajito – The Unvanquished, 1956; Apur Sansar – The World Of Apu, 1959) completed the acclaimed ‘Apu Trilogy’. What followed was a long career as a long career as a world – class filmmaker. Until 1981, he would make a feature length film every year. His later films included – Parash Pathar (The Philosopher’s Stone, 1958), Jalsaghar (The Music Room, 1958), Devi (The Goddess, 1960), Teen Kanya (Two Daughters, 1961), Kanchanjungha, (1962), Mahanagar (The Big City, 1963), Charulata (The Lonely Wife, 1964), Kapurush-O-Mahapurush (The Coward & The Holy Man, 1965), Nayak (The Hero, 1966), Goopy Gyne Bagha Byne (Adventure Of Goopy & Bagha 1970), Shantraj Ke Khilari (The Chess Player, 1977), Joi Baba Felunath (The Elephant God, 1978), Ghare- Baire (Home and The World, 1984) and Shakha Proshakha (Branches Of The Tree, 1990). In 1961, Ray revived Sandesh, a children’s magazine founded by his grandmother, to which he continued to contribute illustrations, verses and stories throughout his life. He made a significant contribution to children’s literature in Bengali. Most of his fiction was written for teenage children. His detective stories and novels were particularly popular with them.

His stories are unpretentious and entertaining. The subjects included: adventure, detective stories, fantasy, science fiction and even horror. In 1992, he accepted Lifetime Achievement Oscar from his sickbed in Calcutta through a special live satellite-television event and Bharat Ratna the ultimate honour from India.