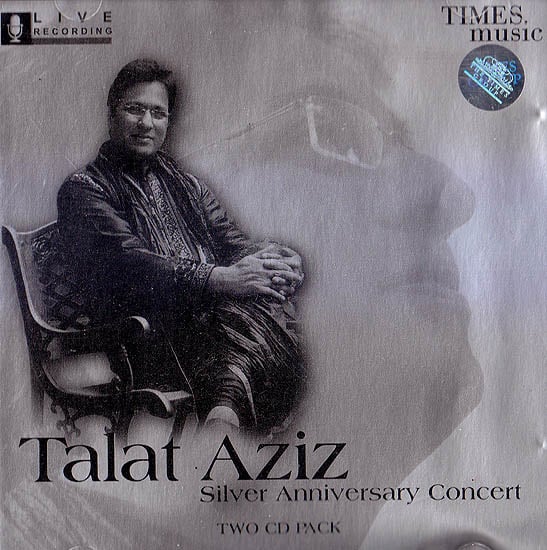 The year 1979 Melody appeared to be drowning in electronic cacophony and then that soothing voice sweeps across the world of music. Talat Abdul Aziz khan has arrived. With Jagjit Singh presents Talat Aziz.

For Talat Aziz and his distinguished hyderabadi family music was a way of life. Formal initiation into this world of music for Tabla Aziz was by Ustad Samad khan Saheb and Ustad Fayaz Khan Sahab Talat had the enviable fortune of being groomed into the genteel art of ghazal singing by none other than the legendary Mehdi Hasana Sahab, Since there have been several concerts in India and abroad where Talat Aziz has had the honor of sharing the stage with this maestro.

Twenty five years of mausiqui have followed the success of various albums like Talat Aziz live Lehren Ehsaas, Suroor, Manzil, Saughaat, Dhadkan, Irshad, Irshadd Indeed for there have been more best selling albums with Music India HMV venus and Khushnuma with Universal. Talat Aziz has been a trend setter in other Important musical ways as well his Tassavvur is the Indian Sub continents’ first ever ghazal music Video.

Talat Aziz talent in the form of his golden voice has flowed into the world of cinema as well Umraao Jaan, Bazaarm Daddy just some of the films where Talat has rendered priceless classics for the big screen. With unforgettables like Zindagi jab hi teri Bazm mein or the soothing Phir Chhidi raat baat Phoolon ki or the meleancholic Aaina Mujhse meri pehli si soorat maange.

The star had not yet reached its zenith while singing for ghazal albums and films. Talat aziz also composed the msuci for several television serials. The tittel and other songs of serials like Sahil GHutan Noorjehan Adhikar, Aashirwad and sailaab continue to be hummed be television viewers across the country.