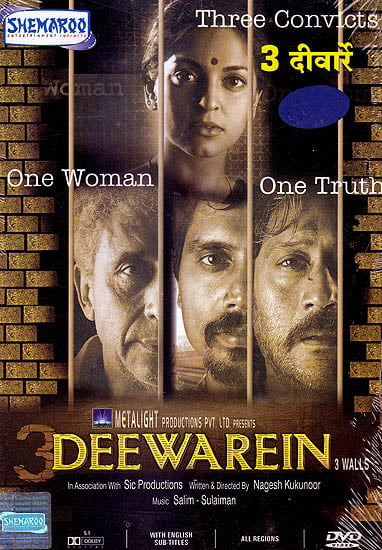 $22.00
FREE Delivery
Quantity
Ships in 1-3 days
Notify me when this item is available
About the DVD

Three prisoners on Death row Jaggu (Jackie Shroff) a lawyer who seek solace in poetry Nagya (Nagesh Kukunoor) a bumbling man aggrieved with the world who believes he is innocent and Ishaan (Nasseruddin Shah) a charmer who believes there is a solution to every problem.

With the entry of Chandrika (Juhi Chawla) a documentary film maker wanting to make a documentary on the three convicts events take on inexplicable twists and turns. As the shooting progresses a bond unfolds between Chandrika and the three condemned men a bond that leads to an edge of the seat finale.

Authenticity is one the key elements that gives the film its cutting edge in the treatment of the story and the prodagonists. The film was shot on location in an actual prison. The actors wore prison uniforms that often lead them to be ordered about by the Jail staff. Even the director was not spread.