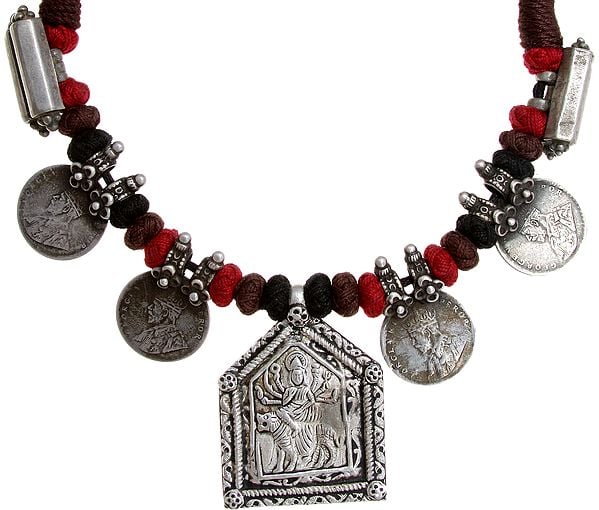 $375
Quantity
Notify me when this item is available

More than 1M+ customers worldwide
Strong ethnic as well as talismanic character wide writ on its face, the necklace consists of three classes of jewellery components : the pendant with Simha-vahini – lion-mounted Durga, four half rupee coins, and two pairs of ‘yantra’-containing roll-boxes, besides the silk cord to include diversely dyed silk beads used for defining spaces between each two units. Crafted as if for the daughter of a tribal chief or a middle class farmer of Bundelkhand, Himalayan hill region or north-east, with moderate land holdings concerned for securing his child against everything untoward and desirous of respectably cladding her this necklace aims at accomplishing three different objectives.

One of the main three components this necklace is composed of is the unit of the four half rupee silver coins of 1938 issued in the name of King George V. A necklace, sometimes a girdle, composed of coins, silver being the metal of the middle class, coins of alloy, of poor, and those of gold, of rich, was the foremost in the jewellery of medieval ethnic groups. Irrespective of one’s status in his social setup that the class of metal or the number of coins used in a necklace or girdle denoted, simple craftsmanship and minimum technique, as the manufacture of a necklace of coins – ‘takahara’, required, essentially defined the jewellery of ethnic groups. Simple coins with assured metal-percentage, each soldered with a hook-ring to hold it along the cord, involved minimum workmanship and far less chances of adulteration. It was completely different from the jewellery of court, or class. The real worth of court or class jewellery was seen in its workmanship, its quantum and quality, artistic character and level of sophistication besides in incorporating with it precious and rare material – metals and stones.

A village shrine like conceived pendant with conical apex, the chased courses of stylized peacocks defining its outer frame on all five sides, and fluted columns, the inner frame, enshrines Ashta-bhuja-dhari Durga seated on her mount lion. Her normal right hand is held in ‘abhay’ – the gesture of assuring protection, and the normal left rests in her lap. In rest six hands she is holding various Vaishnavite and Shaivite attributes, Vishnu’s disc, and Shiva’s trident, being the main. The main necklace excluding the cord that supports it on the neck terminates on either side with a five-sided twin drums like container, the boxes for containing ‘yantras’. Thus, the coins add to the necklace the ethnicity of a medieval ornament, the pendant enshrining the image of Durga, its spiritual aspect, and the ‘yantra’ containing boxes, the talismanic power. All three components are cast of sterling silver, 92.5 % being silver and rest alloy to strengthen it. The Artistically twisted cord with ring and knot terminals to join two ends has been braided from fine silk yarn. 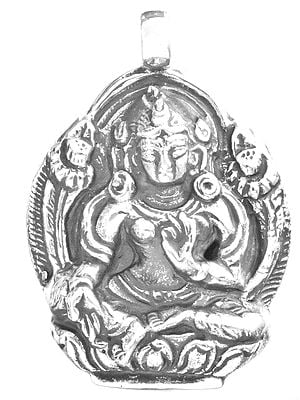 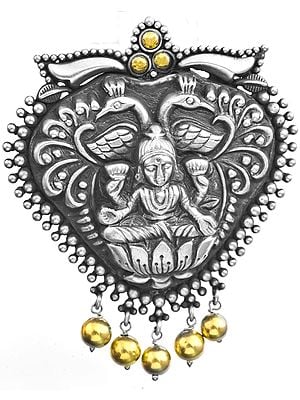 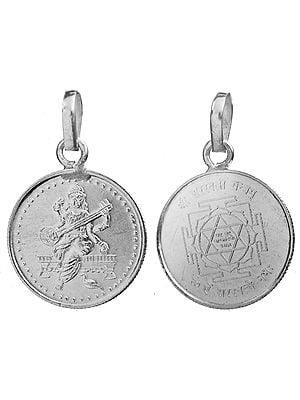 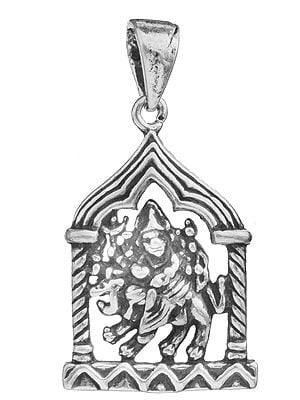 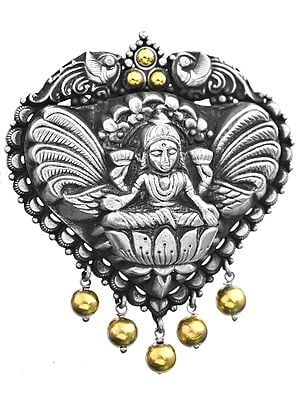 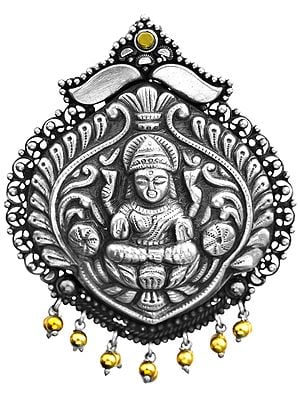 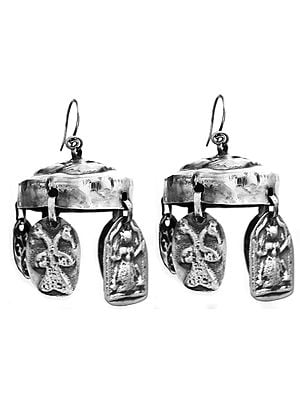 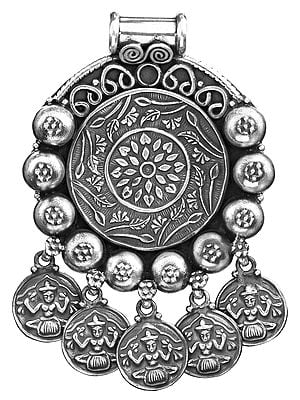 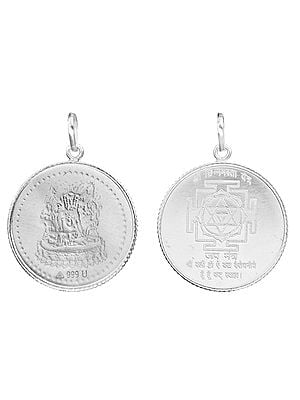 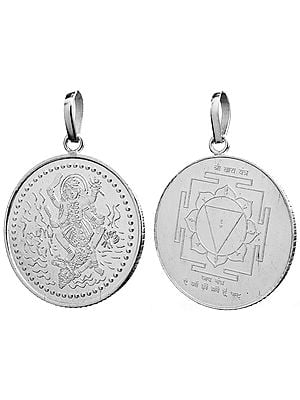 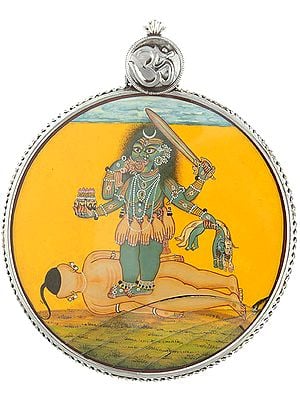 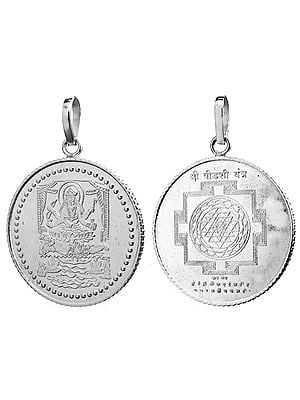 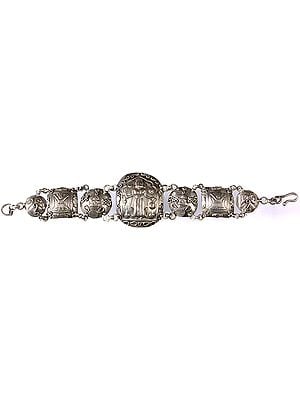 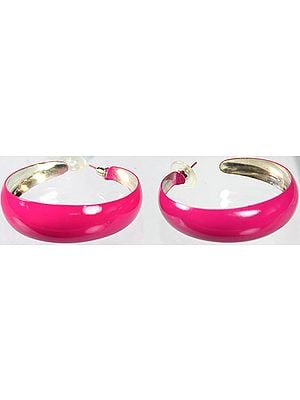 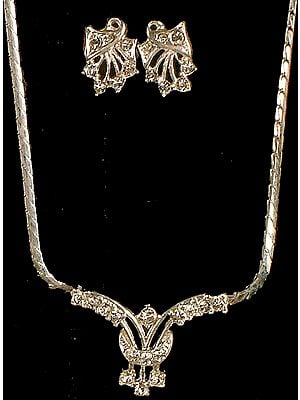 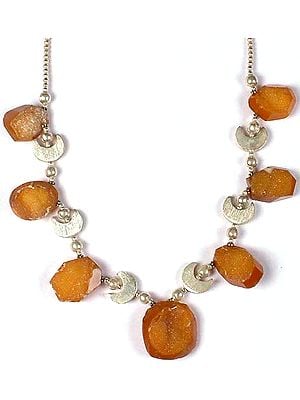