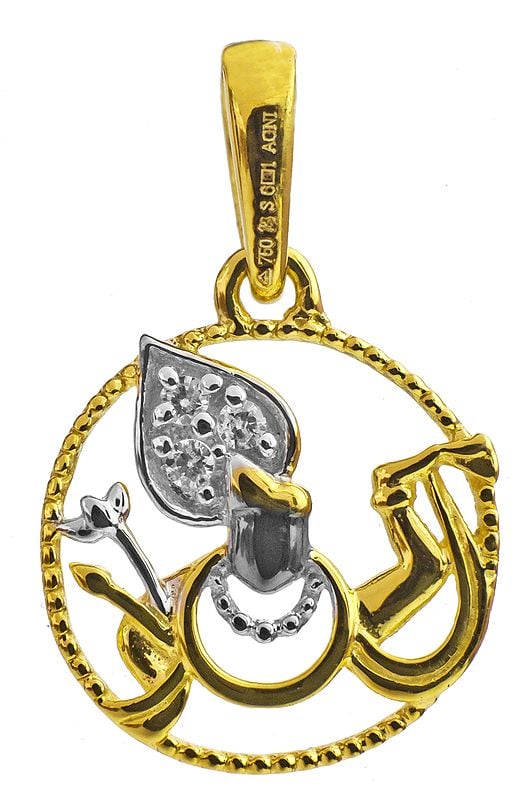 $255.00FREE Delivery
This minimalistic pendant, beautifully smithed as it is, would be a statement addition to your jewellery box. If you are a devotee of Krishna and love jewellery that is unfussy, this is the number for you. It is a simple circular rim of gold, of a uniformly undulating texture. Within the rim is the image of Krishna Himself. He is the favourite of Hindus worldwide, especially young women, just like He was with the gopis at Vrindavan. He is infinitely loving, kind, and wise, and His charms are plenty. Formed in the choicest proportions of a youthful man, He makes divine music with His signature instrument, the flute. In this pendant, one could see the unmistakable silhouette of this deeply loved deity.

The face is carved from a piece of shimmering silver, topped with a hint of gold that functions as a crown. A necklace of miniscule silver stones has been smithed below the same. The rest of His form is in outline, done with select quantities of gold that indicate the sashes and shringar of His form. A stick of gold, which is what seems to be the flute, is to His right, together with a beautifully blooming silver-coloured lotus. The statement-making aspect of this pendant is the gorgeous peacock-feather smithed at an angle to Krishna's crown - a shapely carving of silver, embedded with glassy-coloured stones, dominates the handiwork.