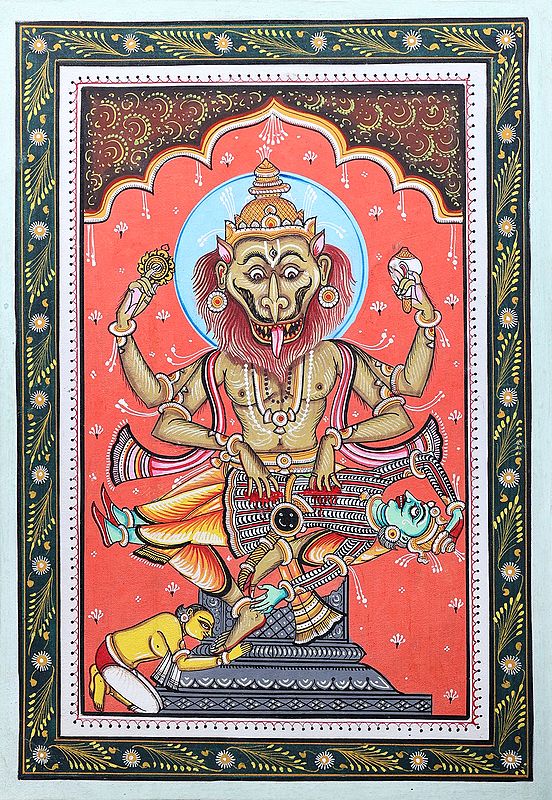 Pattachitra is one of the ancient artworks of Odisha, popularly used as a souvenir for people visiting the temple town of Puri and is characterized by depictions of a mix of both classical and folk elements, but majorly focusing on the folk criteria. The creativity of Pattachitra paintings depict mainly mythological themes, taking inspiration from Lord Jagannatha and the Vaishnava sect. This Narasimha painting depicts all the iconic attributes of a beautiful pattachitra using bright colours that make the protagonist stand out with its accurate qualities. This painting depicts the scene where Lord Narasimha (Vishnu’s incarnation) won over Lord Brahma’s boon to Hiranyakashipu that the demon could neither be killed by a man nor by an animal; neither at day nor at night; neither at home nor outside; neither on the ground nor in the sky; neither by a weapon nor by supernatural powers, by contradicting all the conditions in his avatar and way of killing.

Real pattachitras are shown with a negligible background, focusing just on the scenes to be portrayed. Similar to the way shown here, Lord Narasimha takes a posture as if sitting on a throne with Hiranyakashipu lying on his laps and Prahlada in obeisance near his feet and background barely visible. Lord Vishnu incarnated in the form of the body of a human and the face of a lion (Narasimha) and killed the demon Hiranyakashipu at dusk at the threshold of his house by making lie on his lap and executing him with his claws. The wide-open eyes in red, blood-filled tongue and long pointed teeth protruding out, hair dishevelled around the face are an indication of the ferocious expression of Lord Narasimha.

The painter has used a beautiful interplay of colours while painting every feature of this art; the blue aureole behind the head is symbolic of Narasimha’s divinity. The scene seems to be taking place under a temple arched background filled with floral motifs and a deep green coloured frame painted in an alluring pattern of flowers and leaves. If you are a core Vishnu bhakt, have this Narasimha pattachitra art on your wall space for beautiful and spiritual ornamentation.