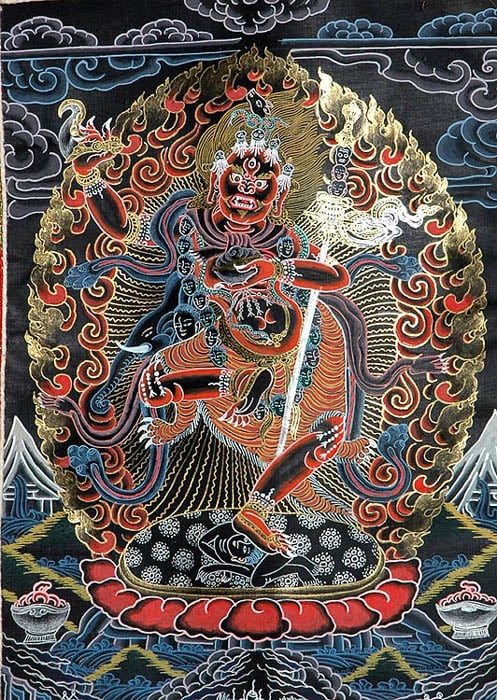 $105.00
Notify me when this item is available
Save to Wishlist Send as E-card Share by Email
This thangka depicts Vajravarahi, a form of female Buddha, is a very powerful Buddhist deity. The dark setting of the painting is effective in creating a serious mood. Vajravarahi is also called Vajradakini or Vajrayogini. Vajravarahi named for the sow's head that generally emerges from the right side of her head, here sow is depicted on the top of her head. The sow is a common Buddhist symbol of delusion, and her having such a face symbolizes that wisdom's conquest of delusion does not merely suppress or destroy a part of the self. Wisdom tames the delusion of egotism and transmutes its energy into compassion and great bliss. A popular yogini form of Vajravarahi appears both as an independent female Buddha and a consort of consort of Shamvara.

There are many forms of Vajravarahi according to attributes she carries in her hands. The first form of Vajravarahi is invoked in those rituals that are performed with the specific purpose of bewitching men and women. She is very popular in Tibet, Nepal and in many Northern Buddhist countries.

She dances in ardhaparyanka on a corpse on a lotus flower. Her expression is ecstatic and wrathful, three eyes are angry and staring. Her mouth is open, showing her teeth, and beard fangs. She wears a crown of skulls with snakes. Her golden hair is upswept in loose. Moreover she is wearing elephant hide and human skin as upper garments; a tiger skin as a lower garment, necklace if serpent, gold earrings, necklace, anklets, waistband, a long garland of severed human heads, and bon ornaments. There is wisdom fire aureole behind her.

Her upraised right hand is holding a vajra-marked chopper, and the left hand near the breast, a cranium. There is vajra-marked khatvanga staff, symbolizing her non-dual union with Chakrasamvara. The ritual staff also signifies that the entire retinue of the sixty-two-Deity Chakrasamvara/Vajravarahi mandala accompanies her. The lower middle ground and foreground are beautifully rendered with high peaks, covered with snow, waterfall, lakes and rocks etc. The bottom center and corners depict auspicious offerings. The black background is filled with clouds. The figure is brilliantly drawn. The thangka is suitable for esoteric sadhana and practices.

B. Bhattacharyya, The Indian Buddhist Iconography,Calcutta, 1968 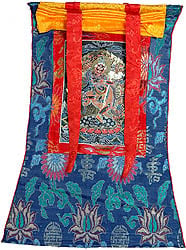