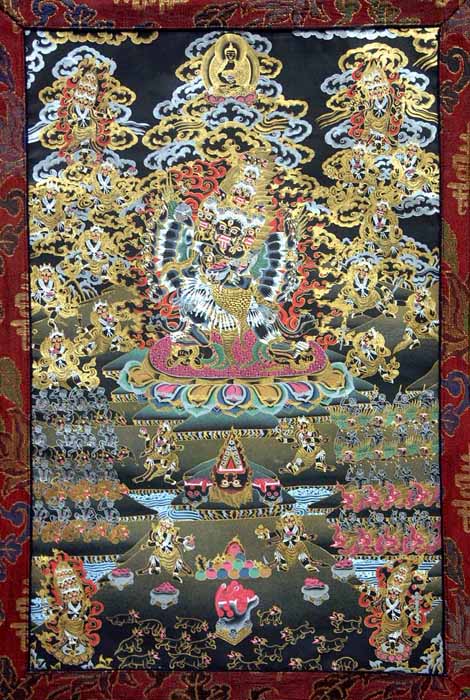 $295
Quantity
Notify me when this item is available
Hayagriva is worshipped in Tibet principally by horse-dealers because he is believed to frighten away demons by neighing like a horse. When invoked, he is said to announce his coming by neighing, which accounts for the presence of a horse's head, his distinctive mark, in his head-dress. The horse's head neighs loudly, and the sound is said to pierce all false appearances of substantiality, revealing the shining reality of freedom. His mantra contains the following verse:

"I request that you protect all horses. Increase the number of mares. For from the mother of the horse many supreme horses will be born. Please disperse the obstacles on the Path and reveal the right direction."

Here he is identifiable by the heads of horses, peeping first from above the cluster of three heads, and then from the topmost head.

Hayagriva is a wrathful manifestation of Avalokiteshvara. There are believed to be 108 forms of Hayagriva. His special ability is to cure diseases, especially skin diseases even as serious as leprosy, which is said to be caused by the Nagas (malignant water spirits with serpent bodies).

Here he is depicted with sixteen arms and five heads, each of which has three eyes. He embraces his shakti, the goddess Marici, whose mouth nearly touches the tongue of the god. This divine pair tramples beneath its feet naga deities, who as mentioned above are symbolic of malignant spirits.