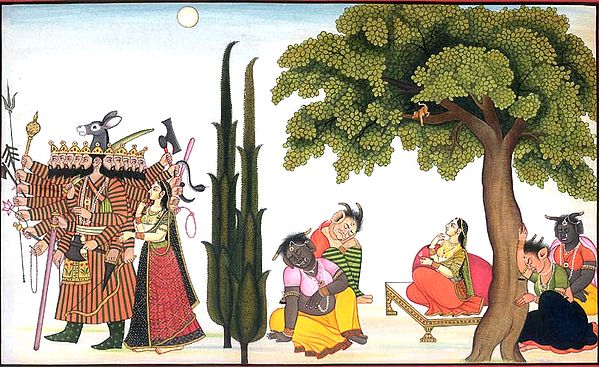 The Fragile Yet Unrelenting Devi Seeta

FREE Delivery
$995
In the heart of the Ashoka Vatika of Lanka, sits the captive Devi Seeta. She had been deceived and whisked away from Her home in Dandaka, in the absence of both Her husband Lord Rama and brother-in-law Lord Lakshmana. All this was part of an elaborate trap laid by Lord Ravana, who was bewitched by Her beauty and resolved in His madness to possess Her. When He finally laid His hands on Her, He held Her captive in Ashoka Vatika.

It is in the recesses of Ashoka Vatika that Mother Seeta stood the test of endless trials and tribulations. It was Lord Ravana’s intention to break Her spirit and make Her yield to Him, and to this end He employed a world of vicious tactics. In this watercolour, Devi Seeta could be seen surrounded by rakshasis (demonesses) the likes of Lord Ravana Himself, who would make the beauteous creature amidst them suffer. When they were not engaged in so doing, Lord Ravana Himself would show up and torment Her with His presence.

However, such is the unflinching loyalty of the Devi that He never succeeds. The work that you see on this page is an expression of His dejection, the exhaustion of the rakshasees. The ten-headed multiple-limbed Ravana slumps away from the presence of the fragile yet unrelenting Devi. Under the blue skies and green canopies of Lanka, She regains Her stance of indefinite waiting, longing to be reunited with Her lord and husband.