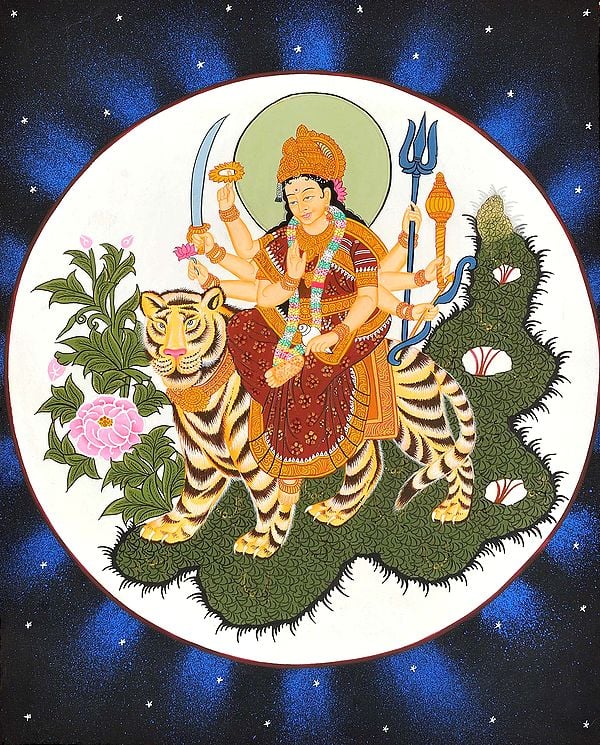 $135
Durga is a goddess of war. She is also called the warrior manifestation of Parvati, a goddess of the holy Tridevi. As a deity associated with war and combat, most narratives about Durga are about her fight and bout against evil. At the same time, this fierce element of her character is also balanced with being associated as the “mother of the universe”. She is revered as a fierce mother-protector who protects the oppressed. Her iconic form is usually depicted on a lion, as also seen in this artistic thangka.

Her multi-limbed appearance defined her iconography and made her appear always battle-ready. Like Shiva, her consort, Durga is also said to be three-eyed. Zoom on her face and this detail are also evident. The painting also artfully showcased the weapons on her eight hands. The conch shell is on the hand that rests on her leg which is a symbol of the OM, or the sound of the universe. On another hand is a pair of bow and arrow which symbolizes energy. The thunderbolt is Durga's sign of conviction. She also holds a pre-bloom lotus that gives light to success as a certainty but not a finality, to pursue spirituality in this murky world. The painting also shows her holding the Sudarshan Chakra, a disk that she spins the signifies how she can control the evil and righteousness in the world. And true to her name as a goddess of war, she is also portrayed wielding a sword for the sharpness of knowledge and the trident that symbolizes inactivity, activity, and non-activity. Finally, the lion represents power and determination, and Durga riding the animal is a powerful message to the world that she has mastered these very qualities.