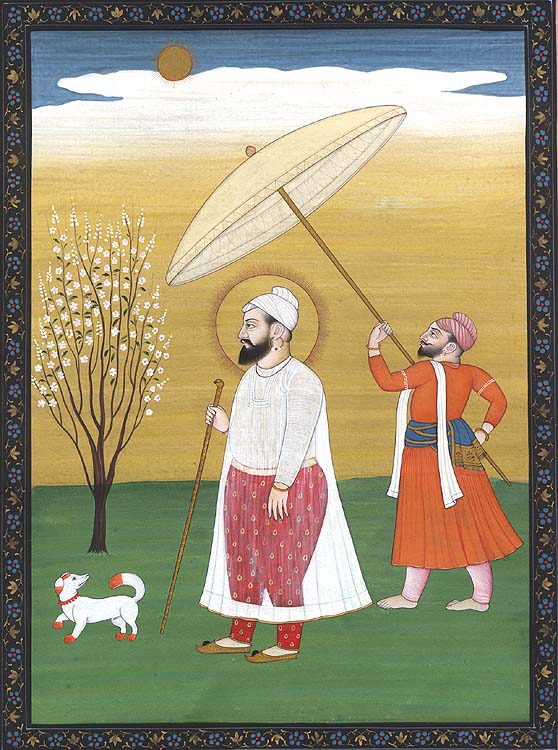 Although he continued to maintain a court and did not compose shabads, the seventh Guru seems to have reverted to the ways of the first five Gurus rather than that of his father. He had a reputation for knowledge of herbal medicines and supplied a remedy for an illness of the son of Emperor Shahjahan. He incurred the suspicion of the Emperor Aurangzeb for supporting his rival, Prince Dara Shikoh, in the war of succession, and was summoned to the Mughal court. He sent his son instead and the young man, Ram Rai, was used by the Emperor in an attempt to create disloyalty among the Sikhs.

The relatively withdrawn and contemplative character of the seventh Guru is well captured by the painter here. The energy and the turbulence that one associates with Guru Hargobind's times are nowhere in evidence: the Guru is simply seen walking, carrying a staff, while a colorfully attired attendant follows behind, raising over the Guru's head an enormous chhatra-parasol which shields him on the one hand from the sun which shines brightly in the sky above, and betokens, on the other, his exalted status. A very pleasant air, an expression of quite thoughtfulness, marks the mien of Guru Har Rai. No flamboyance is in evidence: he is dressed very simply, a long and knee-length cloak of fine muslin worn over pajama-trousers of a fine brocaded material. A simple turban covers the head, and there is the barest of jewelry on the person. But a finely drawn nimbus surrounds the Master's head.

Guru Har Rai died at the young age of thirty-one. Here the chief concern of the artist seems chiefly to be to create an image of calm dignity. The work has all the characteristics of the style that one associates with the Pahari schools: elegance of expression, great fluency of line, a lively but very discreet sense of color. The decorative or extraneous elements that the painter brings in  the flowering plant, the little dog that walks ahead of his master but turns back to look at him, the gold in the background  do not take anything away from the noble impression that the painting makes.