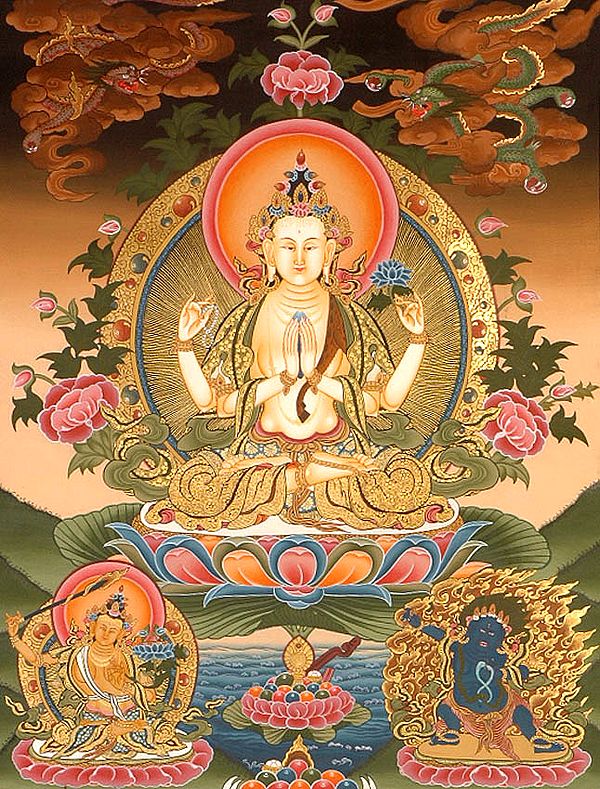 It is believed that the sacred syllables invoke the Buddhas of the six realms, who are manifestations of Avalokiteshvara as he appears to the beings there to alleviate their suffering. The six realms, or forms, of rebirth as mentioned above are hell beings, hungry ghosts (preta), animals, human, demigods and gods. By repeatedly intoning the mantra, Tibetans and many others who do practices centering upon Chenrezig invoke the presence of a Buddha for the benefit of beings in each of those realms, as well as for increasing their own compassion.

In this painting Chenrezig is seated in vajraparyankasana on a moon disk on a lotus flower against a brilliant aureole and moon disk. The complexion of his body is white which symbolizes purity and he has a smiling, enchanting countenance, as he is filled with compassion for all beings. He looks down with tranquility, as he has equal compassion for all. He has four hands, the main hands are held in front of the heart, and holding wish-granting gem, which symbolizes for the spirit of enlightenment that consists of love and wisdom. His right hand holds a rosary, symbolizing that Avalokiteshvara draw forth beings from phenomenal existence. His left hand holds a beautiful full-blown lotus flower, a sign that he serves living beings but is free from attachment. He is adorned with sophisticated gold jewelry indicating his supreme status in the Tibetan Buddhist Pantheon. He wears a five-lobbed gold crown with flowers and precious stones. His lavish scarf with liberal use of gold covers both his shoulders. His lower garment (dhoti) too is similarly rich.

In front of the deity is a bowl of offerings. At the lower left corner of the painting is Manjushri, and to the right is Vajrapani. The top two corners are inhabited by wrathful dragons emerging from stylized clouds. The color scheme of the composition is very well-thought of, with the radiant form of the deity at the center drawing the viewer irresistibly to itself. Not only that, all the figures, including the smaller ones at the bottom, are extremely well-outlined, speaking volumes about the deft control the artist has over his line-work, the most fundamental skill any good artist must possess. 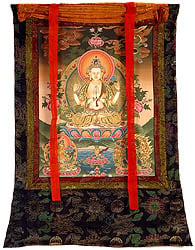 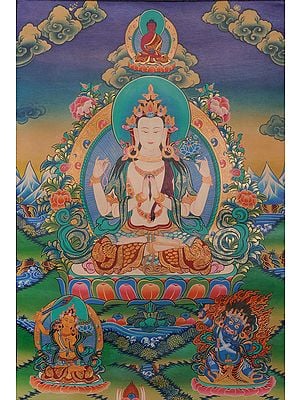