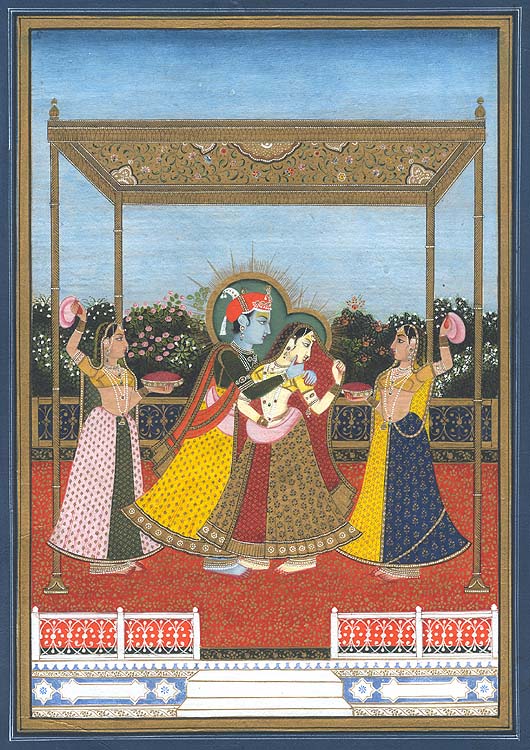 Fair trade
The miniature, though a contemporary work, most characteristically revives the late 18th century idiom of Jaipur school of Rajasthani painting. Here are the same tall, slender figures  tempting females and impatient male, with sharp features, as if carved from marble, passionate and intoxicating eyes, invitingly cute honey-dubbed small lips, colourful but graceful costumes, selective few but rich and elegant ornaments, narrow waists, well defined necks, confident maids, coy mistress and bold prince. Jaipur painting shared with Mughal art its sophistication, finish, delicacy of lines and over-all execution, and these are the features that this miniature showcases. It combines with Mughal splendour the graciousness of the Rajput life-style. Most characteristic of Jaipur art-style is the thick dense greenery in the background and a shaded but plain blue sky of the evening. A column of thickly growing flowering trees  a formal element, comprises an essential feature of the background in Jaipur miniatures of the 18th-19th centuries. The trees in the column are so tall that they rise above the terrace-level, and yet, the flowers that grow on them are roses or such as grow on small plants and shrubs.

The painting represents one of the more popular aspects of princely life  Rajput as well as Mughal, registering its deteriorating phase in the late 18th century India. It was the phase when hunting defined the role of arms  not wars or chivalry, and unabashed sensuous pursuits, revelries, wine-parties, merriment, and the like were now the meanings of love and romance  sacrifice and valour, which once characterised a tale of love, were now elements alien to them. As reveal many miniatures of those days, the wide-open palace-terrace was the usual venue of such activities and of most perversions.

Here, a young lady  a princess perhaps, has been brought to the palace-terrace to meet the prince eagerly waiting for her. The figures of the prince and princess have some resemblance with Krishna and Radha. They have been endowed with halos and are represented as wearing on their waists identical pink sashes. The prince has a gold-bordered orange sash also on his shoulder and a shocking orange turban with gem studded crests and laces of pearls on his head. The princess and the maids in attendance are in 'lehengas'  long and wide skirts, 'cholis'  half blouses, and 'odhanis'  sheets used for covering heads. The style of 'cholis' is similar but that of 'lehengas' and 'odhanis' differ. The 'lehenga' of the princess is broader and more splendid. It has been woven using all gold thread. So is her 'odhani'. It is larger and fine, manufactured, perhaps, using transparent or semi-transparent silk thread. The prince, too, is in yellow 'lehenga', though his upper garment is a full shirt in deep blue.

The prince's blue complexion, yellow lower garment  'pitambara', and the crest with the look of the peacock-feather  features of Krishna's iconography, suggest that like many other princes in Rajasthan he also costumed himself as Krishna. All major states in Rajasthan, from the 16th century onwards, had taken to some form of Vallabha's 'Pushtimarga' and were ardent devotees of the Krishna's Vaishnava 'bhakti'. Larger states had his seats and iconographic distinction and a distinct name. Many princes preferred costuming themselves as Krishna and living like him. They believed that this would add sanctity to their rule and protect them from harm.