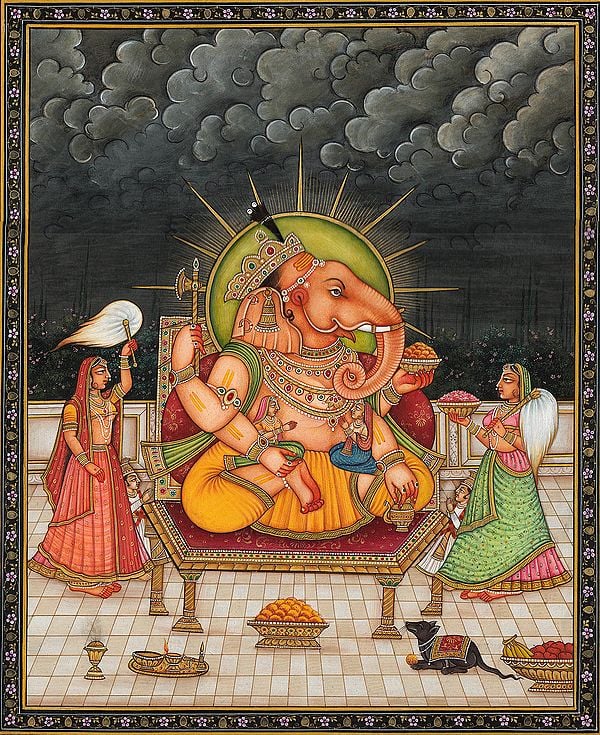 $625.00FREE Delivery
Ships in 1-3 days
Notify me when this item is available
This brilliant image of the elephant god Lord Ganesh, rendered against a dark backdrop enveloping every form except a few colour dots, obviously the flowers in the background, besides the foggy clouds rolling from all sides, represents him in his Lakshmi-Ganapati form, one of the most auspicious forms in Ganapati imagery. During Diwali rituals the icons of Lakshmi and Ganesh are installed side by side and are worshipped together. The two images are popularly designated as Lakshmi Ganesh. However, the Puranic tradition, as it is specifically defined in the Mudgala Purana, Lakshmi-Ganapati is a form of Ganesh and the image of Lakshmi is not its part. It is rather his form that his consorts Riddhi and Siddhi, seated on his right and left thighs, flank. Primarily symbolising wisdom and achievement Riddhi and Siddhi stand for riches, fertility and growth – the attributes of Lakshmi, and hence the form is popularly known as Lakshmi-Ganapati.

Texts describe various attributes and forms of Lakshmi Ganapati. In some traditions he has been conceived with eight to ten arms carrying various attributes. It is, however, primarily the presence of Riddhi and Siddhi that comprises the essence of Lakshmi Ganapati iconography. The other invariably represented attribute of this Ganapati form is the water vessel that the image carries. Lakshmi Ganapati usually carries a green parrot, and sometimes merely the abundant green in any form which symbolises fruition and fertility, and hence good crop and prosperity. Sometimes this image also carries a pomegranate for it most appropriately reveals the character of wealth which like the seeds of pomegranate keeps hidden. The Lakshmi Ganapati form is the giver of success, prosperity, good crop and fertility.

In this image Ganapati does not carry green parrot but the abundance of green is well pronounced. A green halo apart, not only his sash or the border of his ‘antariya’ but his ornaments too have a green base. Though it is the ‘antariya’ of Riddhi, Ganapati seems to be holding a folded green scarf in his normal right hand. Siddhi is also putting on a green ‘antariya’. Pomegranate has been alternated with a basket of ‘laddus’, the symbol of prosperity and riches. His knotted trunk also symbolises riches and prosperity. Significantly, Lakshmi is the consort of Lord Vishnu, though for obtaining Lakshmi – riches, he is never worshipped along her. It is contrarily Ganesh whose worship appeases Lakshmi too and brings her one’s way. Lakshmi precedes Ganapati in Lakshmi-Ganapati form and hence even before Ganesh is worshipped the devotee obtains Lakshmi, the riches and prosperity. The god of good and auspicious, Ganesh presides over the universe as its guardian deity and this role he accomplishes as Lakshmi Ganapati.

The brilliantly coloured painting, a miniature rendered in the late eighteenth century Jaipur idiom of Rajasthani art style, portrays a highly powerful image of Lord Ganesh with a robust form to which a dark backdrop affords greater projection. The tiny icons of Riddhi and Siddhi, almost covered by his arms, are mere symbolic. The four-armed Ganesh carrying in three a battle-axe, ‘kamandala’ – water vessel, and a basket of ‘laddus’, and the fourth, supporting Riddhi, has been represented as seated on a hexagonal ‘chowki’ with a tall back-rest against a large velvet bolster. The ‘chowki’ is installed on a beautifully tiled open terrace. Close to his seat is stationed his mount, the elegantly saddled mouse, and on either side there are chowri-bearing female attendants. 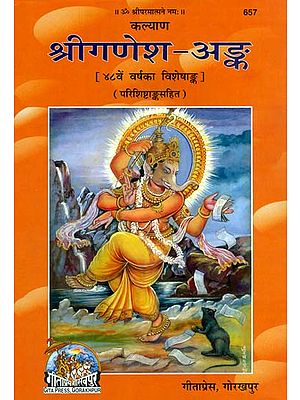 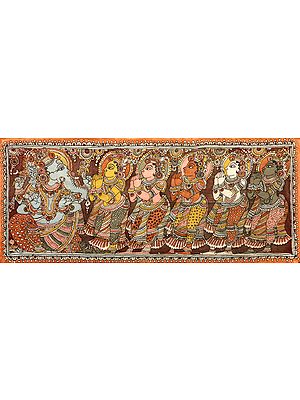 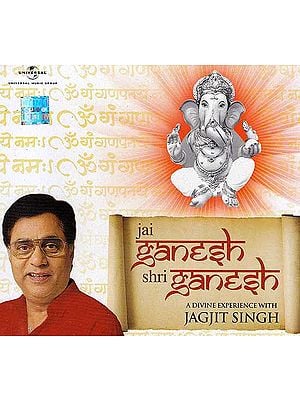 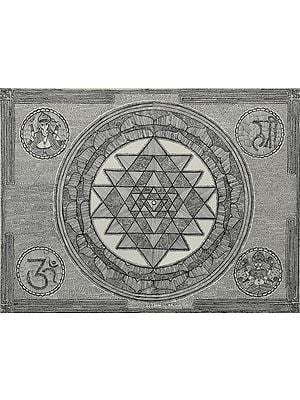 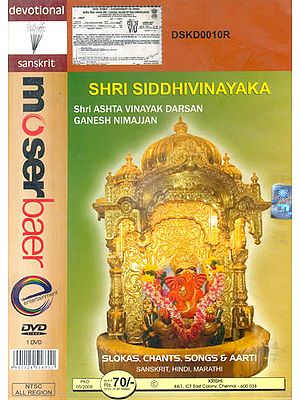 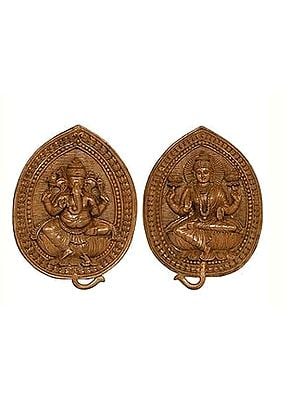 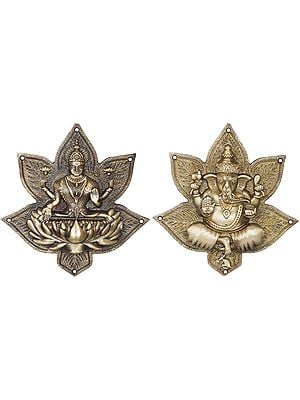 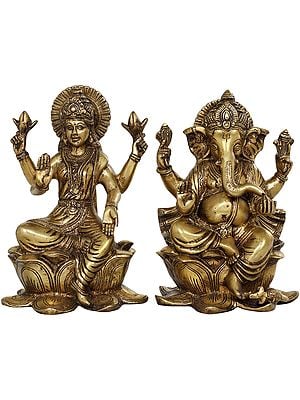 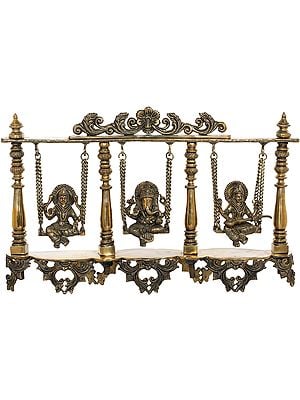 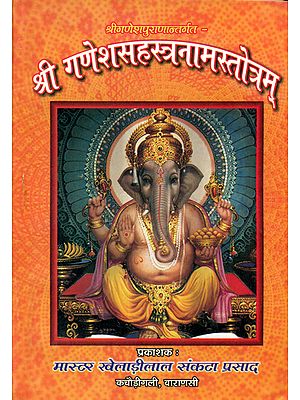 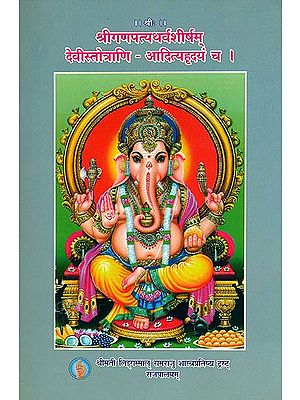 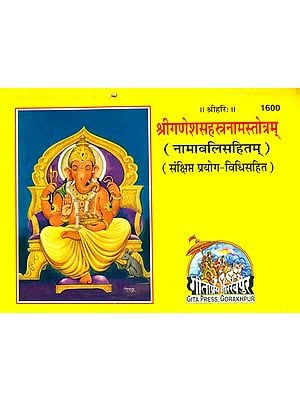 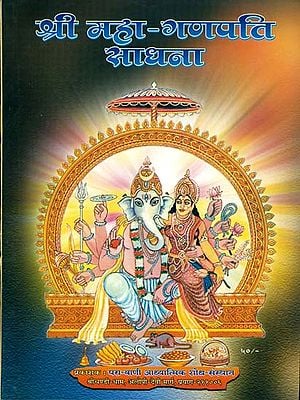 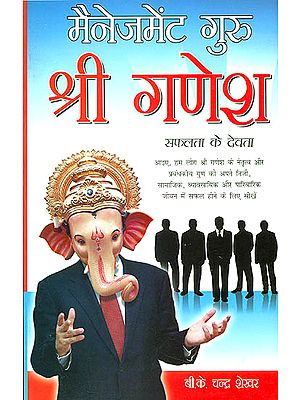 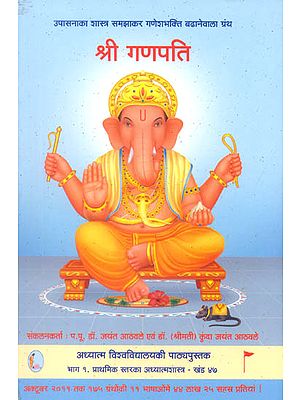 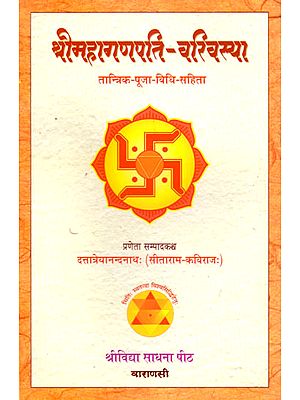 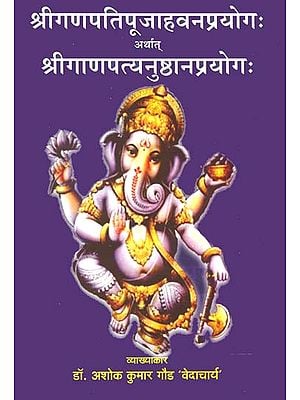 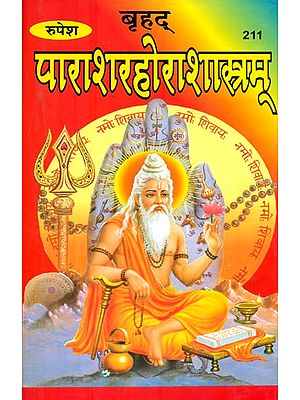